Many have used this stack for massive hard pumps in the gym, significant vascularity and excellent erectile function not discounting the health benefits. If you're looking for any of these benefits and more...give it a try!

More on Nitric Oxide in Men:

[h=3]Interactions with Sexuality[/b][h=4]6.1. Erections[/b]Icariin is a selective PDE5 (enzyme) inhibitor[37] with an IC50 value between 0.75-1.1mM depending on PDE5 isoform[37] and an EC50 of about 4.62mmol/L in increasing cGMP in the corpus cavernosum of the penis;[38] Icariin has approximately 100-fold greater affinity for PDE5 than other PDE isozymes.[39] This effect can be potentiated by the modification of two hydroxyethyl ether moieties to the compound, which increase this inhibition 80-fold,[40] but this modification is not naturally occurring. At 10mg/kg bodyweight in mice (110mg for a 150lb human) Icariin exerts pro-erectile properties[36] and seems to have more effectiveness following repeated doses.[35][36] It has shown efficacy over 30 days at 5-10mg/kg in an animal model of erectile dysfunction related to blood flow,[41] which correlates to a 55-110mg dose for a 150lb man.
Other compounds in the Epimedium family that have PDE5 inhibitory potential are Icarisid II derived from Epimedium wanshanense (not significantly different in potency than Icariin; approximately half of Viagra)[42]
Secondary to PDE5 inhibition, Icariin appears to be a potent pro-erectile agent. It is clearly outperformed by Viagra
Lower doses (1-5mg/kg) are able to improve neuronal Nitric Oxide Synthase (NOS) expression[36] and inducible (iNOS) expression[35][36] content in addition to PDE5 inhibtion. Effects on iNOS and nNOS do not appear to differ greatly from each other at the dosages of 1mg, 5mg, and 10mg/kg bodyweight,[36] suggesting low doses could also exert benefit but by different means.
Icariin may also promote Nitric Oxide signalling via increasing expression of NOS enzymes, which may work synergistically with the PDE5 inhibition
Icariin has also been linked to increasing neurite growth of major pelvic ganglia in vitro[36] which may be downstream of P13K and MEK/ERK activation.[43]

Hugo Vadeboncoeur said:
What about Agmatine instead of Arginine?
Click to expand...

I had this same thread on another "HRT" forum I used to Moderate some time ago and that thread is still alive and well even now.

If you want serious, and I mean serious vascularity, supper hard pumps in the gym that seems to last forever, great morning erections and harder longer lasting erections you need to give this stack a try.

I attached a pic of my right forearm taken not that long ago...and this was 8 hours after being in the gym!

I want to hear from you guys that have given this stack a good 30 day trial and post your results here. 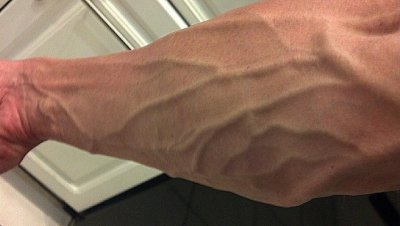 Looking good Gene, I'd say your PIC says it all

Keith Willse said:
Looking good Gene, I'd say your PIC says it all
Click to expand...

Gene in the process of ordering everything now. As soon as I start I'll post.
J

This is the only place I know where you can get Icariin in the higher dosage (60% vs. 10%) to really get the results this herb can provide:

I think Gene is providing his personal experience using the combo. Perhaps is good to add that hypotension can occur. I do agree that there may be a stronger effect on lowering blood pressure with the combo of doxazosin with a PED 5 inhibitor. The study you mentioned states " No subject taking tamsulosin had a decrease in standing SBP less than 85 mm Hg." There was no mention of hypotensic events at the doses used, but I am assuming that a standing SBP of over 85 mm Hg may not cause this issue. It seems that the combination of tamsulosin with viagra or cialis may be a bit safer.

In this pilot study, the combination of alfuzosin 10mg OD and sildenafil 25mg OD is safe and more effective than monotherapy with either agent to improve both voiding and sexual dysfunction in men with LUTS suggestive of BPH.

Interesting enough, 4 mg of doxazosin with Bi or TRIMIX showed good results with no indication of hypotensic events.: http://www.goldjournal.net/article/S0090-4295(98)00388-4/abstract

The incidence of hypotension was low in healthy men given increasing doses of doxazosin with chronically dosed tadalafil or placebo. Administration of tadalafil with tamsulosin was well tolerated in healthy men.

I know of at least 6 of the top man's health clinicians nationally who prescribe low dose daily tadalafil and doxazosin when a PDE5i as a mono therapy ED drug by it self doesn't work and the men have seen spectacular results.

And PubMed studies are fine to prove your point...but just know that you can usually find studies on PubMed that will counter such studies.

"The results indicated that combined therapy with sildenafil and doxazosin GITS for the treatment of ED and BPH/LUTS is safe and effective compared to sildenafil monotherapy".

Gene, do you cycle this stack or do you take it without interruptions?

Ronnie Albert said:
Gene, do you cycle this stack or do you take it without interruptions?
Click to expand...

I am a firm believer, for most things, that the body thrives on regularity.

I take it before bed, upon waking and again in the afternoon with spectacular results.
G

Gene,
I'd like to duplicate your results...
Can you please shoot me a breakdown of where you get each one of these ingredients I want to order these asap so I can get the results asap so I can report back to the group asap!
George
BTW whatup with all that forearm vascularity ...awesome man friggin awesome

George Fuchs said:
Gene,
I'd like to duplicate your results...
Can you please shoot me a breakdown of where you get each one of these ingredients I want to order these asap so I can get the results asap so I can report back to the group asap!
George
BTW whatup with all that forearm vascularity ...awesome man friggin awesome
Click to expand...

Precisely what I was fearing Gene. These are prescription medications and members should only be encouraged to obtain them legitimately...ie: by prescription. If members obtain these online (and do not read my posts), then they will never receive the counseling/ forewarning of potential side effects and risks.

Call me a straight-arrow, but I am a MD and these things concern me...wondering if best to avoid these forums so I don't drive myself crazy...

Gene Devine said:
And we here at ExcelMale.com totally agree with your last statement as well Dr. Saya.
Click to expand...

Hi Guys,
Sometimes the doctor needs to do due diligence and stay up to speed rather than staying with status quo and do what he always as done. I had a doc try to put me on adult ADD medication and come to find out after doing my own research and pushing for getting tested for Low T that I was under between 150 and 200 with T levels. Sorry but Doctors do not know it all and it scares me when they think they do. My current Endo. doc will not even test for Estrogen levels until I start to develop breast tissue. Sorry to me that's a bit late, I like to be proactive not reactive. As a patient I have found I have to be informed and try to read through all of the information on the internet, some good some not. Dont get me wrong I like my Endo doc and we have a good relationship so we are going to talk about Estrogen during my next appointment. I just dont say ok Doc whatever you say anymore.

I also suffer from gout which has really pushed me to do my own research on everything I consume. I recently tired a hydration supplement called HEED; it works along the same lines of Gatorade. Come to find out one of the ingredients messes with Uric Acid levels very rapidly, so it triggered a gout attack. Now I check everything, supplements, prescriptions and food. I look up all the ingredients and confirm no interaction and what each one does. When my past doc put me on Uloric for gout he didnt do it correctly and I was bed ridden in extreme pain for 4 weeks. He just prescribe the new drug cause the one I was taking was to harsh on the system.

Gene, I've assembled everything to start the NO stack. Do you take this everyday or just on workout days? Also, I've been on the 5 MG. daily Cialis now for a couple of months but it is expensive, can you tell me do you use a generic form like the the ones from Secure Tabs? Thanks.

John - I take this stack three times daily; just before bed, upon waking and in the afternoon.

I take 5 mg of Cilais every 12 hours, just before bed and in the afternoon.

Cialis (Tadalafil) has about a 16 hour half life so the every 12 hours means to me that serum levels are always optimal.

Secure Tabs is a good place to get Tadalafil cheaply...many men here have used this site with good results.
B