How to Avoid Getting Gynecomastia 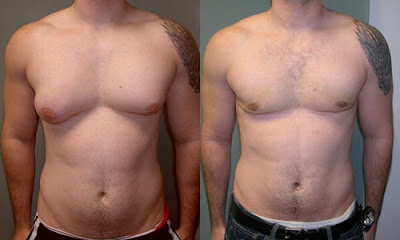 Gynecomastia surgery- Before and after picture


From the book: Testosterone: A Man's Guide


Yes, I am talking about breast appearance in men, not women. Gynecomastia is a benign enlargement of the male breast resulting from a growth of the glandular tissue of the breast. It is defined clinically by the presence of a rubbery or firm mass extending concentrically from the nipples. Men who start experiencing this problem complain of pain and tenderness around the nipple area. Gynecomastia is caused by higher than normal blood levels of estradiol, a metabolite of estrogen. As discussed earlier in the book, testosterone can convert into estradiol, DHT, and other metabolites. Men with higher amounts of the enzyme aromatase usually have this problem even at lower doses of testosterone. Growth of this glandular tissue is influenced by a higher fat percentage, older age, excessive alcohol intake, and the use of certain medications. Gynecomastia usually occurs early in testosterone replacement in those who experience this side effect.


In several studies on testosterone replacement, only a very small percentage of people receiving testosterone experience growth of breast tissue. In one HIV-specific study conducted by Dr. Judith Rabkin in New York, she reported that out of 150 men enrolled in the study, two men experienced this adverse reaction. Gynecomastia is much more common among those who use high testosterone doses, such as bodybuilders (they call this "gyno" or "bitch-tits").
How do you manage gynecomastia if it does occur? Lowering the testosterone dose had not proven helpful for the two patients in Dr. Rabkin's study. The use of antiestrogens, such as tamoxifen 10 mg twice daily, with lower doses of testosterone has been effective. Gynecomastia can become permanent if the condition lasts very long although it may reduce in size when the androgen use is discontinued. In the absence of resolution, surgical correction may be necessary in severe cases.


For men who experience enlarged breast size, doctors usually check estradiol levels to determine whether too much testosterone is being converted into estrogen. I do not believe that routine measurement of estrogen is needed for men who have no symptoms of high estrogen (mainly breast tissue enlargement and water retention). For those who have higher than normal estrogen, doctors usually prescribe an antiestrogen medication. One such regimen is anastrozole at 1 mg/day during the first week until nipple soreness and breast enlargement disappear. The dose is then lowered to 0.25 mg a day, or 1 mg twice a week.


A warning: Bringing estrogen down to very low levels could cause health problems in men in the long run. Hair/skin quality and health, brain function, bone density, and other important factors may be greatly influenced by estrogen. However a 12-week study in men using anastrozole at 1 mg a day and 1 mg twice a week found no changes in bone metabolism markers.


The normal production ratio of testosterone to estrogen is approximately 100:1. The normal ratio of testosterone to estrogen in the circulation is approximately 300:1. Estrogen (measured as estradiol) should be kept at 30 picograms per milliliter (pg/mL) or lower. As men grow older or as they gain a lot of fat mass, their estrogen blood levels increase, even to levels higher than that of postmenopausal women.


Medications and Products That Can Cause Gynecomastia
A number of medications have been reported in the medical literature to cause gynecomastia due to decreases in testosterone, increases in estradiol, or both. These include:
Antiandrogens. These include cyproterone, flutamide, and finasteride.used to treat prostate cancer and some other conditions.
HIV medications. Sustiva, Atripla, and Videx have been associated with gynecomastia.
Anti-anxiety medications such as diazepam (Valium).
Tricyclic antidepressants. These include amitriptyline.
Glucocorticoid steroids.
Antibiotics.
Ulcer medication such as cimetidine (Tagamet).
Cancer treatment (chemotherapy).
Heart medications such as digitalis and calcium channel blockers.
Anabolic steroids
Substances that have been reported to cause gynecomastia include:
Alcohol
Amphetamines
Marijuana
Heroin
Soy and flaxseed- There are conflicting studies but it is something to keep in mind
Exposure to pesticides and byproducts of plastic processing has also been linked to increased estrogen and decreased sperm count in men.
Fore more information
For more information on anastrozole pricing by prescription, fill out this form: Click Here
Last edited by a moderator: Jun 20, 2019

As it is explained on the attached clinical nomograph, the diagnosis of the cause of a certain cases of gynecomastia (breast tissue growth in men) is complex and not necessarily explained by high estradiol blood levels.
Gynecomastia: Clinical evaluation and management

Blood results show low T and low E2, what to do ? Gynecomastia ...

How to Avoid Getting Man Boobs

How does one differentiate between gynecomastia and non-gyno ...

Excellent guide for the diagnosis of causes of gynecomastia

A Longitudinal Study of Growth, Sex Steroids and Insulin-like Growth Factor I in boys with Physiological Gynaecomastia

Physiological gynaecomastia is common and affects a large proportion of otherwise healthy adolescent boys. It is thought to be caused by an imbalance between estrogen and testosterone, though this is rarely evident in analyses of serum.


Objective:
This study aimed to describe the frequency of physiological gynaecomastia, and to determine possible etiological factors (e.g. auxology and serum hormone levels) in a longitudinal set-up.

A prospective cohort study of 106 healthy Danish boys (5.8&#8211;16.4 years) participated in the longitudinal part of “the COPENHAGEN Puberty Study”. The boys were examined every six months during an eight year follow-up. Median number of examinations was 10 (2&#8211;15).

Blood samples and analysed for FSH, LH, testosterone, estradiol, SHBG, inhibin B, AMH, IGF-I and IGFBP-3 by immunoassays. Auxological parameters, pubertal development and the presence of gynecomastia were evaluated at each visit.

52 of 106 boys (49 %) developed gynaecomastia of which 10 (19 %) presented with intermittent gynaecomastia. Boys with physiological gynaecomastia reached peak height velocity at a significantly younger age than boys who did not develop gynecomastia (13.5 vs 13.9 years, p = 0.027), and they had significantly higher serum levels of IGF-I (p = 0.000), estradiol (p = 0.013), free-testosterone (p < 0.001) and FSH (p = 0.030) during pubertal transition. However, no differences in serum LH or in the estradiol to testosterone ratio were found.

Man Boobs : Treatments for Gynecomastia
Gynecomastia Associated with a Combination of High IGF-1 and Estradiol In Adolescents

Gynecomastia, also known as &#8216;gyno' is the over development of the male breast. Gynecomastia is a medical affliction estimated to affect more than 60% of men in some form or another throughout life. It can develop early or later and usually results from a combination of unbalanced hormones, stress and body fat gain.
Few men seek treatment for the condition and mostly suffer in silence afraid to remove their shirt in public. The condition often is associated with devastating emotional and social trauma.
Dr Cruise is recognized as THE global leader in the removal of gyno in men. He has performed close to 2000 surgeries and his track record in helping men recover from this condition is unparalleled. There is no reason men should suffer in silence anymore from gynecomastia.

"Clearly, the effect of estradiol on male sexual desire is linked to testosterone levels, as there are different outcomes when estrogen is administered at low and normal testosterone levels. Another example of this duality is seen in men with androgen resistance, where unfettered estrogen is able to stimulate subsequent breast development. However, in men with normal androgen receptor activity, estradiol is unable to stimulate breast development. [21] This is thought to be due to an imbalance between the inhibitory and stimulatory effect of these hormones. [22],[23] Whatever the pathophysiology in breast development or libido, these hormones seem to be inextricably linked in the complicated physiology of male sexuality and development."
Last edited: Apr 9, 2019

Gynecomastia: How to Diagnose and Treat it | Discounted Labs