Trimix or Quadmix—Available by prescription from compounding pharmacies. These are mixtures of prostaglandins and papaverine that increase blood flow and retention into the penis. Prostaglandins are mediators and have a variety of strong physiological effects, such as regulating the contraction and relaxation of smooth muscle tissue. Prostaglandins are not hormones and they are not produced at one discrete site, but rather in many places throughout the human body.

Trimix is a mixture of two prostaglandins (phentolamine and alprostadil) plus papaverine (a vasodilator medication) that increase blood flow to the penis and cause strong and lasting erections, with or without sexual stimulation. These compounds appear to act together to increase arterial inflow, dilate smooth muscles and restrict venous outflow promoting erectile rigidity with greater success and in smaller doses than if these compounds were used as single therapies.

An example of a dosage combination for tri-mix is 10 micrograms of alprostadil, 500 micrograms of phentolamine and 15 mg of papaverine. Dosing of trimix preparations has not been standardized. Trimix is injected directly into the side of the penis through a fine- gauge “insulin-style” needle in very small amounts (0.1-0.5cc) that increase blood flow to the penis. It results in strong and lasting erections. The main potential side effect is hematomas(bruising), fibrosis if used too frequently and on the same injection site, pain, and dangerously long-lasting erections(priapism). Priapism may sound great but this can literally kill your penis by causing gangrene of the tissue after stagnant blood coagulates inside it. I know men who had to go to an emergency room 8 hours after having used too much Trimix and have the blood drained from their penis. To ensure perfect injection technique and dosing, it is imperative to be trained on how to dose this with the help of a urologist.

Compounding pharmacies sell two types of Trimix formulations: Freeze dried (powder to be mixed later with water) or pre-mixed vials. Some men find the freeze-dried form not to be as effective.

Trimix: How Long Can it Stay Off Refrigeration?

It is extremely important to remember never to use Viagra, Cialis, or Levitra before or at the same time as you use Trimix. This is a dangerous combination that can increase the risk of priapism. Be particularly careful with Cialis since it can stay in your bloodstream for a longer time. I know someone who had priapism since he had forgotten he had taken Cialis two days before using Trimix.

Most men who use Trimix love it, even if they have had to learn the hard way about priapism during one instance. Most of these men did not respond well nor had too many side effects to oral agents like Viagra or Cialis. 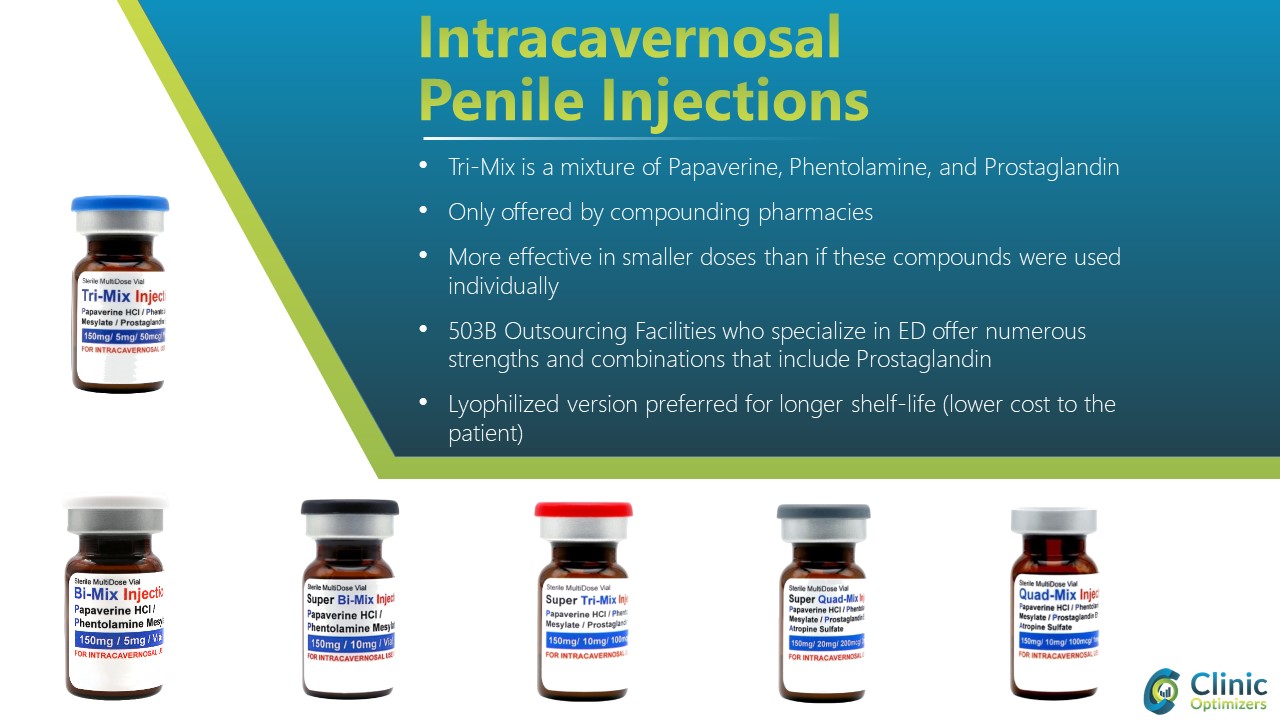 Some men who do not respond completely with TRIMIX use a quad mixture (QUADMIX) of phentolamine, papaverine, prostaglandin E1, and atropine. Others who may have pain associated with a TRIMIX injection use a bi mixture (BIMIX) of phentolamine and papaverine. One of the advantages of BIMIX is that it does not have to be refrigerated (but kept at cool temperatures) which can be more practical for travelers. BIMIX may be offered as first-line therapy before deciding to prescribe Trimix. 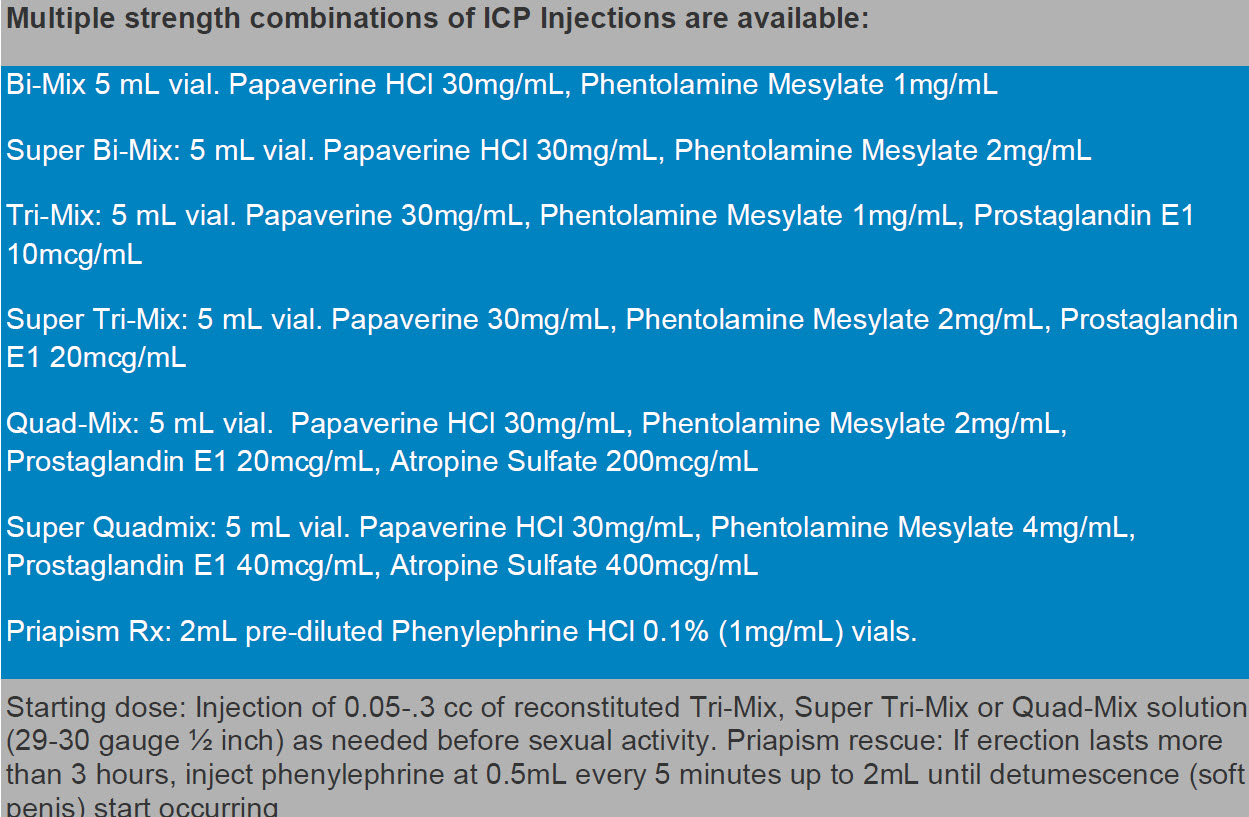 A single agent FDA-approved drug that only has Prostaglandin E1 is dispensed as injectable alprostadil either as Caverject Impulse® or Edex®. These two products are not as effective as BIMIX, TRIMIX, and QUADMIX but may be covered by some insurance companies. Their copay may be higher than paying for TRIMIX, though. The injection volume is also 10 times larger than TRIMIX.

For instructions on how to inject Trimix, read:
Instructions and general information about Trimix

Video: How to Inject Trimix

For instructions for physicians on how to treat priapism in the unfortunate case that it happens:
Priapism in Emergency Care

How to prevent priapism caused by trimix

HOW TO PREVENT PRIAPISM CAUSED BY TRI-MIX

What is priapism:
Priapism is an involuntary erection which lasts more than 4 hours and is unrelieved by ejaculation. This condition is a true urological emergency and early treatment allows the best chance for functional recovery.

How to prevent priapism when taking Tri-Mix or other penile injection therapies (ICP):
If priapism occurs:
Over-the-counter medications to take:

How to use amyl nitrate to treat priapism:
Usually sold as “poppers”, amyl nitrate usually comes in a bottle. Inhale over 3 seconds, wait for at least 10 minutes and inhale again once if erection does not start decreasing. Headaches and flushing are common.

Terbutaline- 10mg once, then take another 5mg-10mg 15 minutes after the first dose only if needed. If you have been prescribed Tri-Mix or any other ICP injection and are concerned about priapism you may request a prescription for Terbutaline to have on hand.

Phenylephrine: Some physicians provide you with a prescription of 2mL pre-diluted Phenylephrine HCl 0.1% (1mg/mL) vials that you may obtain with your first prescription of Tri-Mix from a compounding pharmacy. A typical protocol is 0.5mL every 5 minutes up to 2mL until detumescence (soft penis) starts. Phenylephrine use has potential cardiovascular side-effects and it is recommended that blood pressure and pulse are monitored every 15 minutes for an hour after the injection. This is particularly important in older men with existing cardiovascular diseases. More information about phenylephrine
If these do not work and erection has been present for 4hrs and/or is painful then immediately visit the ER for treatment.

Click here for related posts:
Has anyone had erections lasting more than 3 hours with Trimix?

Does anyone inject Phenylephrine HCL for priapism?

You will need a prescription written as: TRIMIX (10 micrograms of alprostadil, 500 micrograms of phentolamine and 15 mg of papaverine), 5 MLS, as directed. Make sure you ask for insulin syringes (30 gauge, 1/2 inch needles), and alcohol swabs with your order.

SUGGESTION:
I think every person who is new to Trimix or who have had one episode of priapism should have their doctor prescribe phenylephrine along with Trimix. I have been telling compounding pharmacies to sell the two together per request so that men do not end up at the emergency room to get their penis drained, irrigated and to have an injection of phenylephrine. If your penis is hard 4 hours after injecting Trimix, just follow the priapism protocol mentioned above.

Inform your doctor about this extra PRESCRIPTION: PHENYLEPHRINE HCL INJECTION

Penile Injection Therapy: Overview and how to perform injections


Any experience with Trimix use several times over a few days?


Why would Trimix not work while Viagra does?


1) Dizziness : a small per cent of men will experience light headedness with injection, if you experience this, sit/lie down immediately.

2) Penile Curvature: The injection sites can scar in some men depending on which medication you are on (<1-4%) causing a bend in the penis with erections. If this develops, notify your MD.

4) Priapism : This is most concerning side effect for injections, and it involves an erection that lasts longer than 4 hours in the absence of sexual stimulation. Typically it is extremely painful, and the penis is extremely rigid. If untreated (typically > 4-24 hours), it can result in permanent erectile dysfunction that would no longer be responsive to injection therapy. Priapism occurs in 1-5% of patients using injections and most often occurs when using too much medication, or mixtures of erections with other erectile aides. The goal length of erection is 30-45 minutes with injection, or resolution with ejaculation. If you experience an erection for > 2 hours do the following:

Priapism Treatment Pathway : Follow these steps until the erection softens ; if the erection becomes “bendable” you are okay.

1) Ejaculate (sometimes more than once is helpful).

2) Apply an ice pack to the penis for 30 minutes to an hour.

3) Take 2, 30 mg tabs of Sudafed (chew it) for a total dose of 60 mg (this is available behind the counter, ask your pharmacist to help if necessary). Do not use the new formulation of Sudafed so talk to the pharmacist to get you the old formulation. You will be asked to provide your ID since meth drug dealers use the old formulation to make meth, so the government wants to keep close monitoring of anyone buying it frequently. You do not need a prescription. For faster action, chew it!


4) If you are out of town or cannot reach any urologist, proceed to the emergency department and give them this instruction sheet:

4. Place tourniquet around the base of the penis, but do not tighten it until the needle is in place.

5. Insert a 21g or greater butterfly needle and withdraw 15-20 ml of blood to release tension.

8. Repeat this no more than 2 times and remove as much fluid as possible after each irrigation.

10. Watch the pulse rate of the patient as an increase would indicate the corpora are draining and no further irrigation is needed.

11. Remove the needle and apply pressure over the area of injection for 5 minutes.

12. Observe the patient for at least 5 more minutes.

13. If more definitive treatment is needed, call the urologist. Patient instructions following priapism:
Use an ice pack to area for 30 minutes to 1 hour at home.
No intercourse for 48 hours.
No more injections until advised by your managing urologist!

How to prevent priapism caused by trimix

Very honest videos about his journey from Trimix to penile implants. Please do not watch if you have problems with gay sex. Trimix Video Getting ready for a penis implant Any nasty comments will get people banned.

Penile Injection Therapy: Overview and how to perform injections

More questions and answers about Trimix:

What is Trimix & How Does it Work? | Empower Pharmacy

Erectile dysfunction (ED), the inability to achieve or maintain penile erection long enough for sexual activity, is a disorder that affects men primarily between the ages of 40 and 70.