To understand the theoretical pharmacologic effect of BoNT A on erectile function, one must first understand normal erectile physiology. Multiple organ systems play a role in achieving a rigid erection, including the cardiovascular, central nervous, peripheral nervous, endocrine, and psychological systems. Normal psychogenic erections require the input of erotic visual or auditory stimuli. That input is then transmitted from the central nervous system through the spinal cord as neural signals to the peripheral pelvic nerves, which prompt the release of nitric oxide (NO). NO plays a role as a local intrapenile neurotransmitter that facilitates the relaxation of intracavernosal smooth muscle, allowing for increased blood flow into the corpora cavernosa. The expansion of the corpora cavernosa leads to increased pressure on the surrounding emissary veins, thereby decreasing the venous blood outflow. The synergy of increased arterial inflow and decreased venous outflow allows a man to attain and maintain a firm erection.14 Detumescence occurs with the metabolism of cyclic GMP by intracavernosal type 5 cyclic GMP phosphodiesterase. Cyclic GMP is needed to maintain nitric oxide-induced dilation of the intracavernosal smooth muscle tissue.

The hypothesis behind BoNT A's potential erectogenic effect lies in the idea of an existing balance between sympathetic and parasympathetic influences that maintain flaccidity and rigidity in the penile tissue, respectively. It is believed that BoNT A inhibits the exocytosis of norepinephrine synaptic vesicles at the postganglionic sympathetic neurons in the erectile tissue. The blunting of the sympathetic tone allows NO, which diffuses freely, to be the dominant neurotransmitter within the erectile tissue, thus increasing the overall parasympathetic tone.11 Additional unknown mechanisms are also thought to play a physiologic role in the efficacy of BoNT A on ED, as studies showed objectively improved erectile function after BoNT A ICI in patients who failed ICI con training sympatholytic agents.5,15 The onset of BoNT A occurs within days of exposure, with maximal effect expected within weeks. The effect on muscle tissue begins to subside at 2 months, and baseline function returns at 3 months.16

Despite the theoretical increased risk of systemic side effects when injecting a neurotoxin into a vascular organ like the penis, no reports of priapism or systemic toxicities have been reported in the 2 animal and 2 human studies conducted to date in this research space.9,10,12,13 In Giuliano's retrospective review, one patient reported mild penile pain during the injection, and another reported mild penile pain during the 3 days following the injection.12 In Abdelrahman's prospective trial, no local or systemic complications occurred in the treatment or the control group during the period of the study.13 Unlike intracavernosal collagenase clostridium histolyticum injections, which may be associated with pain, bruising, or hematomas, BoNT A lacks significant local adverse effects and is well tolerated, similarly to PGE1 ICI. Long-term follow-up after multiple BoNT A ICI is currently lacking. Therefore, long-term safety data and possible sequelae (ie, corporal fibrosis, diminished therapeutic effect, etc.) can't be elucidated at this time.


In conclusion, intracavernosal BoNT A injections have demonstrated safety in many urologic and non-urologic pathologies. The therapeutic potential of its use in the treatment of ED holds some potential but has not seen widespread adoption. A limitation of BoNT A injections includes its limited efficacy duration (months), requiring repeat injection. High-level evidence to support its wide clinical utilization for the treatment of ED is currently scarce. Large multicenter double-blinded randomized controlled trials with extended follow-up are needed to determine the long-term safety and optimal dose of BoNT A in ED treatment. Penile doppler hemodynamics and patient-reported outcomes questionnaires (IIEF/SHIM) can be utilized as objective efficacy metrics in future studies. Given the multitude of treatment options currently available for the management of ED (PDE5i, VED, IU alprostadil, ICI, prostheses) and the many treatment options currently under investigation (LiSWT, SCT, PRP), a substantial advantage of BoNT A use would need to be demonstrated to warrant its inclusion in the treatment algorithms. 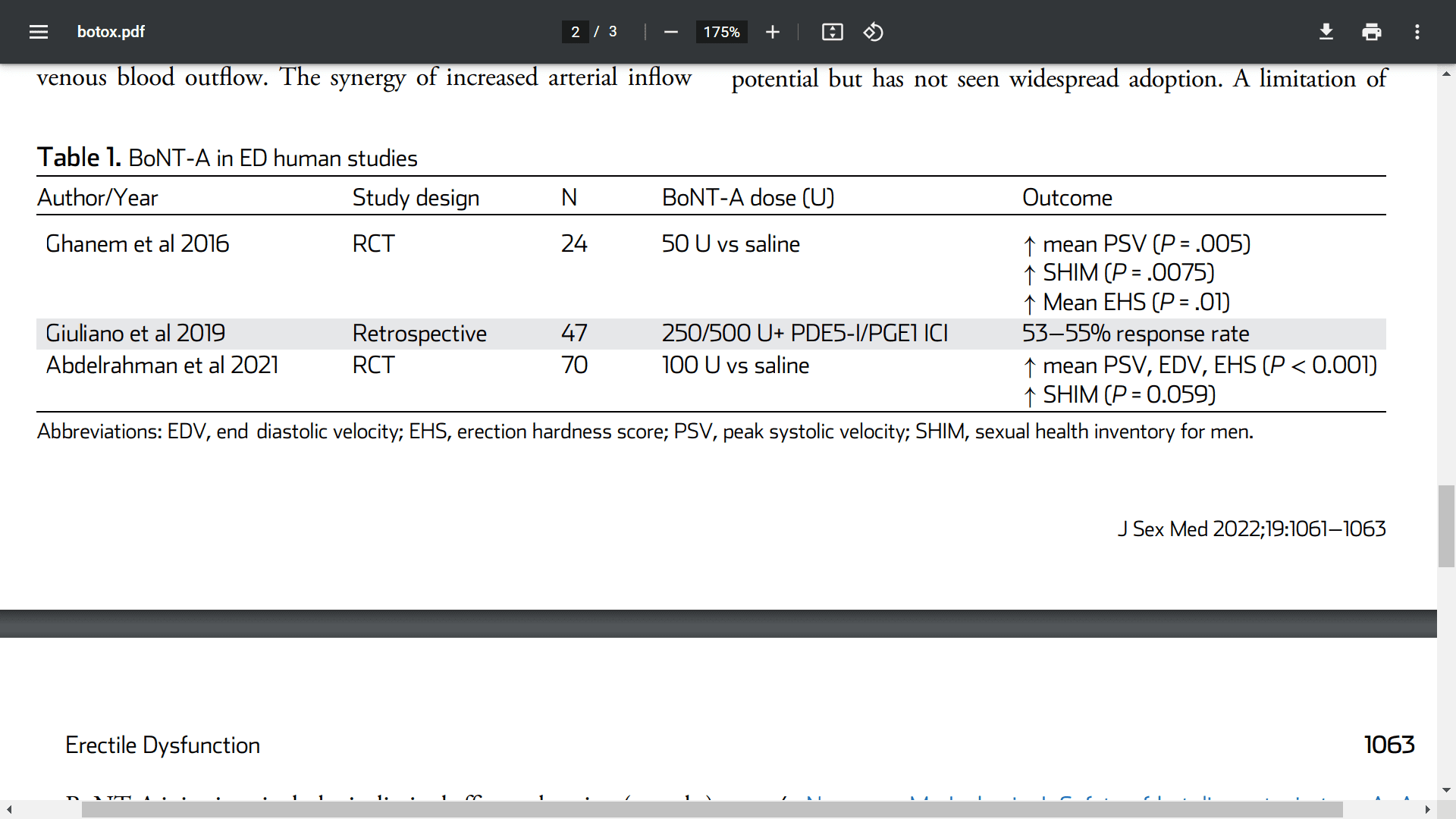 Application of Botox in Male Sexual Dysfunction: Where Are We Now?

Abstract Background: Erectile dysfunction (ED) is a socio-economic problem.There are several options for its management including intra-cavernosal injection (ICI). Objective: To compare the safety, efficacy, and durability of ICI of onabotulinum toxin-A (BTX) in different doses (50 and 100 U)...

Again a point that needs to be stressed!

Everyone is so caught up on hormones T, estradiol, DHT, and prolactin.

Erectile function/libido are complex and multifactorial.

*Testosterone replacement therapy can improve several aspects of sexual life, including erection, only in hypogonadal subjects but its contribution alone is clinically effective only in milder forms of erectile dysfunction

Physiology of Erection and Erectile Dysfunction

Physiology of Erection and Pathophysiology of Erectile Dysfunction (2021) Susan M MacDonald, Arthur L Burnett INTRODUCTION The complex pathway from sexual arousal to penile erection has been elucidated in great detail. Advances in neuroimaging have delineated the cortical and limbic system...

Long-term treatment of ED: beyond the purely symptomatic use of PDE5I

Thinking About Pathomechanisms and Current Treatment of Erectile Dysfunction—“The Stanley Beamish Problem.” Review, Recommendations, and Proposals ABSTRACT Introduction: Up to 50% of all men over 50 years of age suffer from erectile dysfunction. Since the late 1990s erectile dysfunction has...