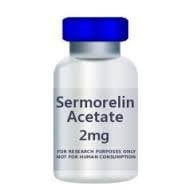 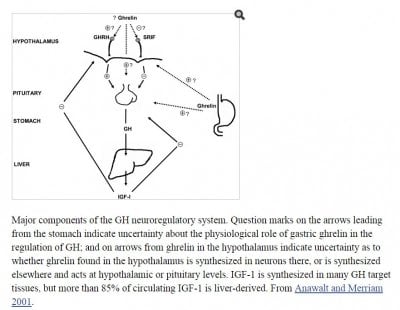 What is Sermorelin Acetate?
Sermorelin is a growth hormone releasing hormone that makes your own pituitary gland produce growth hormone. It is not covered by insurance and may be expensive. It can be obtained by prescription. It requires a daily injection under the skin. It may decrease body fat slowly. More information here:
Sermorelin

A study using sermorelin in adults used a dose of 1 to 2 mg per day to see if it had an effect on cognitive function. The product worked in achieving that goal. That dose increase GH levels by 100 percent and IGF-1 levels by 34 percent.


Using smaller doses like 0.1 to o.3 mg per day may result in IGF-1 level increases of less than 10-20 percent which may not be enough to be picked up by IGF-1 testing (due to error and variability). So, this needs to be taken into consideration if sermorelin is prescribed and IGF-1 levels at baseline and week 8.


Sermorelin acetate used to be sold by Serono as the brand name GEREF used for diagnosis or treatment of growth hormone deficiency. It was discontinued by the company of July 2008 as they picked up the rights of a more expensive growth hormone releasing hormone called tesamorelin. Tesamorelin is approved to decrease abdominal fat in people with HIV with lipodystrophy (visceral fat build up due to HIV and its medications). This product resulted in 1 inch waist size decrease at week 18 with 2 mg per day injections but it only worked for 60 percent of patients. This product has not sold well and it is priced at $2200 per month for a 2 mg per day dose. http://www.hivandhepatitis.com/hiv-...ple-on-tesamorelin-improves-metabolic-profile

"Once daily GHRH injections can stimulate increases in GH and IGF-I at least to the lower part of the young adult normal range (Merriam et al 2000). The University of Washington study of 6 months treatment with daily bedtime subcutaneous injections of GHRH(1&#8211;29)NH2, alone or in combination with supervised exercise conditioning, was begun in response to the NIH initiative (Merriam et al 2002, 2003). IGF-I levels rose approximately 35%. As with GH, subjects showed an increase in lean body mass and decrease in body fat (particularly abdominal visceral fat). However, there was no improvement in strength or aerobic fitness associated with GHRH injections. Testing again confirmed the benefits of exercise but showed no effect upon IGF-I levels; thus it appears that GH/GHRH and exercise work through different mechanisms (Vitiello et al 1997). Subjects receiving GHRH also showed no change in scores on an integrated physical functional performance test mimicking activities of daily living, but there was a significant decline in physical function in the placebo group (Merriam et al 1997, 2003; Cummings and Merriam 2003). This tantalizing finding, suggesting that GHRH can stabilize if not improve physical function, needs confirmation. There is only one other published study of chronic GHRH in normal aging, which reported positive effects on exercise testing after 3 months of treatment (Veldhuis et al 2005).

Sleep and cognition were also studied in the GHRH trial, with surprising results. GHRH failed to improve and may even have impaired deep sleep, despite the rise in IGF-I and pulsatile GH. However, GHRH treatment was associated with improved scores in several domains of fluid (but not crystallized) intelligence &#8211; those measures previously found correlated with circulating IGF-I levels (Vitiello et al 2006). This intriguing preliminary finding is now being studied more systematically at the University of Washington in a new NIH-funded study (the Somatotrophics, Memory, and Aging Research Trial, or “SMART”).

Thus as with GH, there is a consensus on hormonal and body composition effects but inconsistent functional effects on function; and in addition there is a very encouraging but still unconfirmed positive effect on some domains of fluid intelligence."


Comment: The above studies checked for IGF-1 at baseline and week 2. If IGF did not increase by at least 15 percent at week 2, they would double the dose. 83 out of 89 people did not require a dose adjustment. Average IGF-1 increase was 30 percent at the 1 mg per day dose. This dose may be expensive for many men since no insurance will pay for this peptide for an off-label prescription. Usual starting dose is less than 1 mg/day in clinics around the country. Some check IGF-1 level after a few weeks to see if dose needs to be adjusted. Some just monitor symptoms and quality of life.

Here is another link which features Dr Richard Walkers studies on Sermorelin. I had the opportunity to work with him at SARA, he is the peptide guru of our time!

How Growth Hormone can improve your brain function

jbruce said:
Here is another link which features Dr Richard Walkers studies on Sermorelin. I had the opportunity to work with him at SARA, he is the peptide guru of our time!

He sure is. And a really nice fellow on top of that.