Testosterone exerts an important regulation of cardiovascular function through genomic and nongenomic pathways. It produces several changes in cardiomyocytes, the main actor of cardiomyopathies, which are characterized by pathological remodeling, eventually leading to heart failure. Testosterone is involved in contractility, the energy metabolism of myocardial cells, apoptosis, and the remodeling process. In myocarditis, testosterone directly promotes the type of inflammation that leads to fibrosis and influences viremia with virus localization. At the same time, testosterone exerts cardioprotective effects that have been observed in different studies. There is increasing evidence that low endogenous levels of testosterone have a negative impact on some cardiomyopathies and a protective impact on others. This review focuses on the interrelationships between testosterone and cardiomyopathies and heart failure.

Testosterone (T) is the principal male sex hormone and is secreted primarily by the testes.1 Only 1%–2% of testosterone circulates in the blood as free testosterone, and the remaining is bound to proteins including albumin and sex steroid hormone-binding globulin (SHBG).1 Plasma levels of T vary with circadian rhythm and fluctuate throughout life.2 Aging is associated with a gradual decline in testosterone levels in men and an increase in circulating SHBG levels.3 In addition to its anabolic and androgenic effects, testosterone has important effects on the cardiovascular system. The cardiac effects of testosterone are influenced by plasma levels, cellular metabolism, modulation of intracellular pathways, and androgen receptor expression.4 Androgens exert their physiological effects through a genomic mechanism that is mediated by the androgen receptor,5 but several possible nongenomic pathways have also been identified (Figure 1). These nongenomic pathways seem to be more rapid than the genomic mechanisms. The nongenomic effects of androgen characteristically involve the rapid induction of conventional second messenger signal transduction cascades, including increases in cytosolic calcium levels and activation of protein kinase A, protein kinase C, and mitogen-activated protein kinase (MAPK).6

Testosterone replacement therapy (TRT) has been shown to alleviate myocardial ischemia in men with coronary artery disease;9–11 increase exercise capacity in men with heart failure;12–14 and improve serum glucose levels, hemoglobin A1c (HbA1c) levels, and insulin resistance in men with diabetes and prediabetes.15,16 On the other hand, TRT has been linked to prostate cancer, polycythemia, and obstructive sleep apnea and its long-term effects are unknown.17


*TESTOSTERONE AND CARDIAC CONTRACTILE FUNCTION
Testosterone influences the cardiovascular system by acting directly on cardiac cells. Cardiomyocytes express receptors for all major sex steroid hormones including testosterone and are thus exposed to their modulatory effects on myocardial cell physiology. Testosterone has an important role in intracellular Ca2+ homeostasis. Mediated by the androgen receptor, testosterone activates L-type calcium channels, which increase the intracellular levels of calcium and thus regulate myocardial contractility.18


*TESTOSTERONE AND MYOCARDITIS
Sex hormones play opposing roles in the immune system, with estrogen having stimulatory effects and androgens being immunosuppressive.67 Androgens decrease B-cell maturation, reduce B-cell synthesis of antibodies (Abs), and suppress auto-Ab production in humans.68 It is known that autoimmune disorders predominantly affect women and that affected men have lower serum concentrations of androgens.69 Androgens have immunomodulatory properties, suppressing macrophage production of pro-inflammatory cytokines (IL-1β, IL-6, and TNF-α) and increasing the production of anti-inflammatory cytokines (IL-10).70,71 In male rats with heart failure, testosterone treatment suppresses ventricular remodeling and improves cardiac function by diminishing the imbalance between IL-10 and TNF-α. 72 In contrast, T promotes the pro-inflammatory Th1 and/or Th17-type immune response73 that is characteristic of acute myocarditis.

Figure 1: The main actions of androgen in cardiomyocytes. (1) Genomic pathway: androgen freely passes through the membrane and binds cytoplasmic AR. Bound AR translocates to the nucleus, binds to a DNA response element on the promoter of an androgen-responsive gene, and stimulates transcription. (2) Nongenomic pathways: androgen interacts with a membrane-associated androgen receptor, leading to the activation of L-type calcium channels. This increase in intracellular calcium can lead to the activation of PKC and, via calmodulin, lead to the activation of the PKA and MAPK pathways. The initial influx of Ca2+ further stimulates the efflux of Ca2+ from the sarcoplasmic reticulum via ryanodine receptor type-2 channels. Ca2+ from these sources converges on the MAPK/ERK pathway, through which ERK subsequently translocates to the nucleus and interacts with transcriptional factors. (3) Testosterone induces cytoprotection by activating ATP-sensitive K+ channels in the cardiac mitochondrial inner membrane. T: testosterone; DHT: dihydrotestosterone; E: estradiol; AR: androgen receptor; ER: estrogen receptor; PKA: protein kinase A; PKC: protein kinase C; MAPK: mitogen-activated protein kinase; ERK: extracellular signal-regulated kinase. 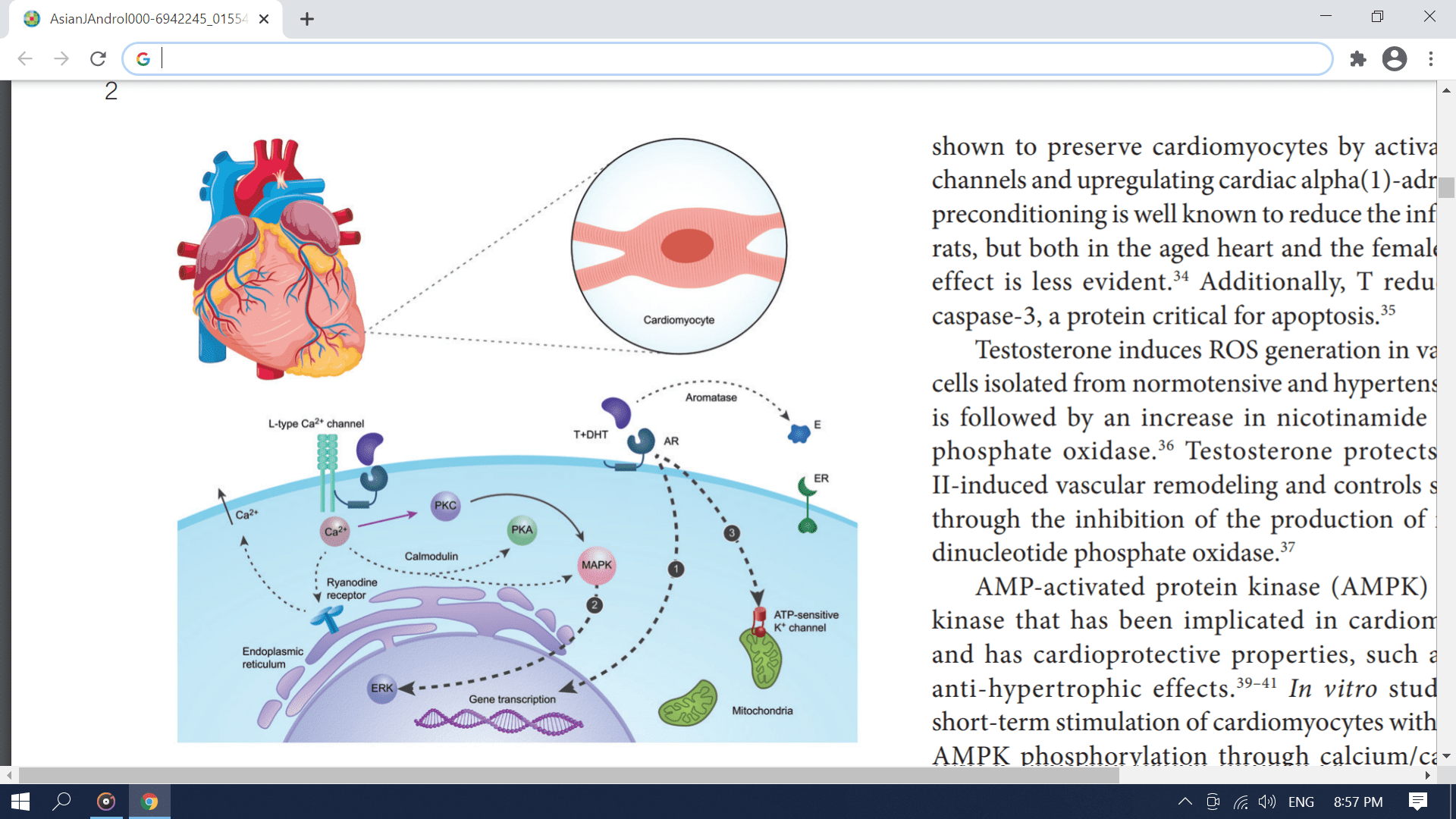 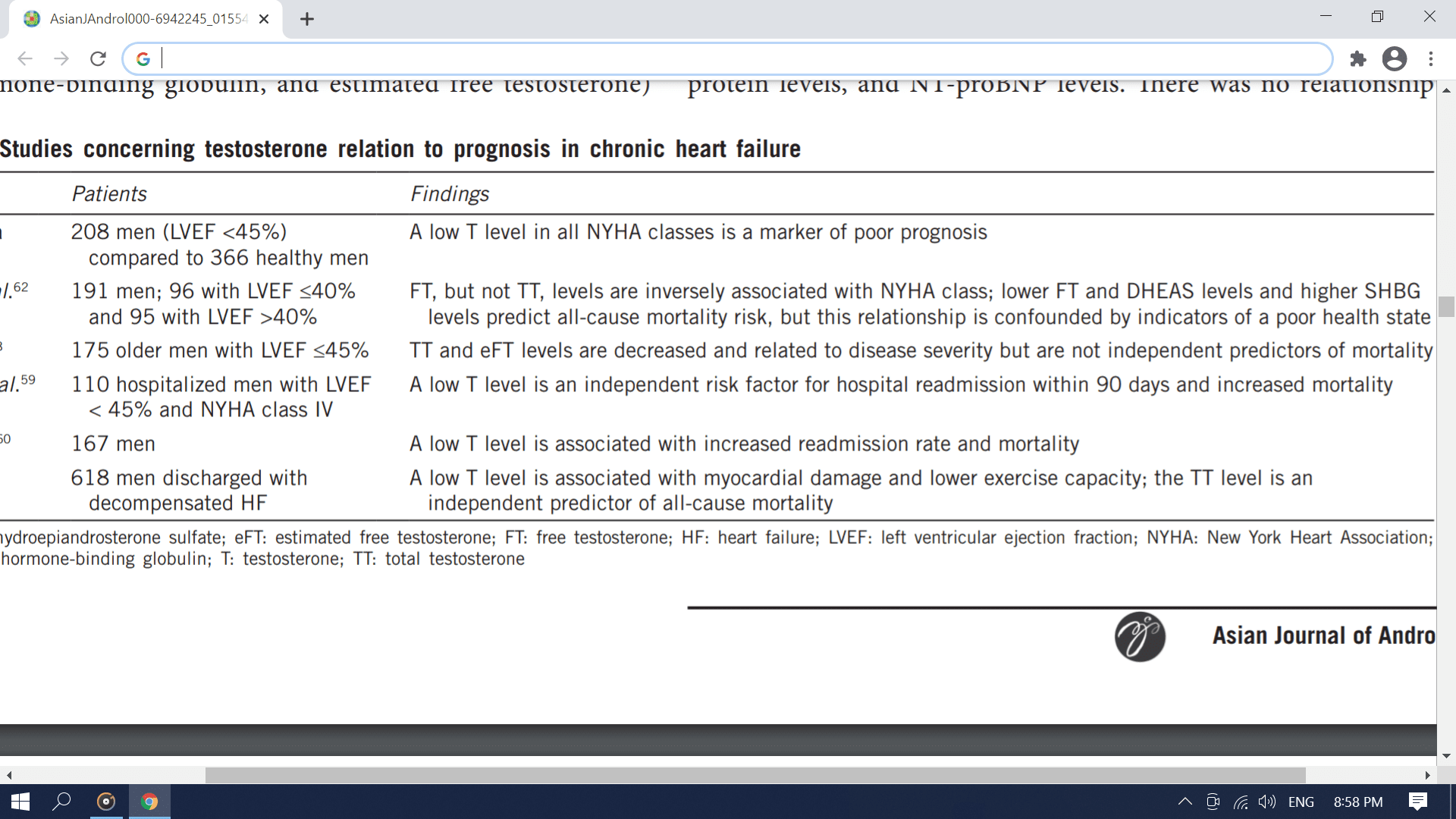