Letter to the editor: Questioning the evidence behind the Saturation Model for testosterone replacement therapy in prostate cancer

We are honored by Dr. Kim’s detailed review [1] of our paper, titled, “Shifting the paradigm of testosterone and prostate cancer: The Saturation Model and the limits of androgen-dependent growth,” [2] and grateful for his generous comments. However, we feel obligated to address several inaccurate comments by Dr. Kim.

It has now been 11 years since the publication of this article, and over that time we have been gratified by the wealth of published research confirming all key elements of the Saturation Model. The introduction of the Saturation Model revolutionized concepts regarding the relationship of androgens and prostate growth, benign and malignant, and has served as the theoretical framework for major changes in clinical practice, including the use of testosterone (T) therapy in men with prostate cancer (PCa). It is important for younger readers to understand that, prior to the introduction of the Saturation Model, the universally held belief was the “Androgen Hypothesis”, which held that higher androgen concentrations caused proportionally greater growth of prostate tissue and that higher serum T meant greater PCa risk and aggressiveness.

The saturation model provided a radically different view, one that resolved an awkward paradox in which androgen deprivation clearly lowered prostate-specific antigen (PSA), yet raising T in hormonally intact men had little effect on PSA or prostate size. In one swoop, the Saturation Model assembled a messy assortment of clinical observations and experimental results into a coherent picture. Simply, the Saturation Model holds that prostate tissue is exquisitely sensitive to changes in serum androgens at low concentrations, and little to no sensitivity once a saturation point is reached. Clinical data indicate the saturation point for serum T is approximately 250 ng/dL [3-5].

The mechanisms underlying the Saturation Model include the following observations: a) T or its derivative, 5α-dihydrotestosterone (5α-DHT), mediate prostatic cellular function by binding to the androgen receptors (AR). b) There is a finite number of AR binding sites per cell, and c) once AR sites are fully occupied with T or 5α-DHT, a saturation state is achieved, beyond which increasing circulating T or 5α-DHT cannot elicit additional biological activity via this mechanism [2]. Other mechanisms are possible [6], yet this relationship of androgens with AR is adequate to explain observed phenomena over a wide range of experimental data.

More than a decade since its publication, the Saturation Model has turned out to be a robust description of the relationship between androgens and the prostate, and we are unaware of any compelling evidence to the contrary. At this point, we conclude that the Saturation Model should no longer be considered a hypothesis, but rather an accurate framework describing the relationship of androgens and the prostate.

Figure 1: The saturation model. Increasing T levels result in PSA elevation and/or prostate tissue growth until the saturation point is reached, beyond which T does not further stimulate the prostate. 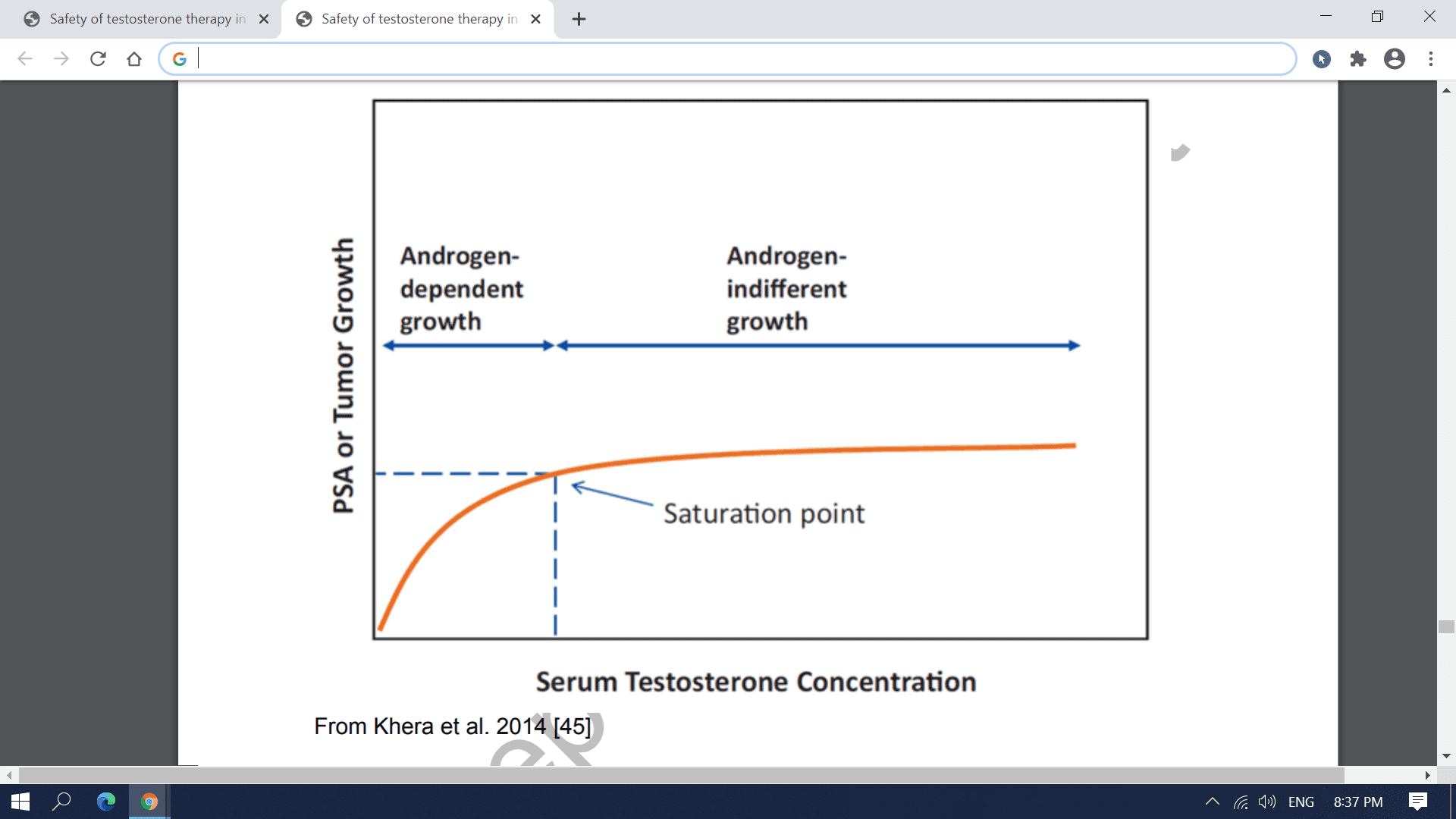