Neuroactive steroids can be synthetic or endogenous molecules produced by neuronal and glial cells and peripheral glands. Examples include estrogens, testosterone, progesterone, and its reduced metabolites such as 5α-dihydroprogesterone and allopregnanolone. Steroids produced by neurons and glia target the nervous system and are called neurosteroids. Progesterone and analog molecules, known as progestogens, have been shown to exhibit neurotrophic, neuroprotective, antioxidant, anti-inflammatory, glial modulatory, promyelinating, and remyelinating effects in several experimental models of neurodegenerative and injury conditions. Pleiotropic mechanisms of progestogens may act synergistically to prevent neuron degeneration, astrocyte, and microglial reactivity, reducing morbidity and mortality. The aim of this review is to summarize the significant findings related to the actions of progesterone and other progestogens in experimental models and epidemiological and clinical trials of some of the most prevalent and debilitating chronic neurodegenerative disorders, namely Alzheimer’s disease, Parkinson’s disease, Huntington’s disease, Amyotrophic Lateral Sclerosis, and Multiple Sclerosis. We evaluated progestogen alterations under pathological conditions, how pathology modifies their levels, as well as the intracellular mechanisms and glial interactions underlying their neuroprotective effects. Furthermore, an analysis of the potential of natural progestogens and synthetic progestins as neuroprotective and regenerative agents, when administered as hormone replacement therapy in menopause, is also discussed.

Sex steroid hormones play fundamental roles in reproductive biology and participate in other modulatory functions such as nervous system homeostasis. The gonads, adrenal glands, and placenta mainly produce sex steroids. However, steroids are also synthesized de novo in the central nervous system (CNS) and peripheral nervous system (PNS) from cholesterol molecules by glia (oligodendrocytes and astrocytes in the CNS and Schwann cells in the PNS) and neurons (Figure 1). When produced in the CNS and PNS, they are called neurosteroids [1].

Progesterone is the key regulator of the female cyclic reproductive tract. Changes in the levels of this hormone maintain pregnancy in all mammals. Interestingly, the physiological effects of progestogens on target cells are mediated by the classical (slow actions) and the non-classical (fast actions) pathways (Figure 2). The progesterone classical pathway is triggered by the association in the cytoplasm and subsequent nuclear translocation of the classical progesterone receptors (PR): PR-A and PR-B, which are members of the nuclear receptor superfamily, that act as ligand-activated transcription factors [4,5]. The complex progesterone-PR binds to progesterone-responsive elements (PRE) in the DNA, allowing the transcription of a specific set of genes [6]. The PR gene in humans is localized on chromosome 18, and it consists of 8 exons. The PR-A and PR-B isoforms are produced from the same gene transcript but are controlled by different promoters. Both isoforms have been identified in diverse tissues, including gonads, uterus, mammary glands, pancreas, bones, urinary tract, and brain. PR-B acts as a transcription activator of progesterone-responsive genes, while PR-A inhibits or counteracts PR-B activity, functioning as a modulator [7].

Concerning the non-classical pathway, it is triggered by membrane progesterone receptors (mPR) and progesterone receptor membrane components 1 and 2 (PGRMC1 and PGRMC2), which initiate rapid intracellular signaling cascades. The mPRs are metabotropic receptors composed of seven transmembrane domains that have been shown to activate G proteins. They belong to the progestin and adipoQ receptor (PAQR) family, and there are five known isoforms (mPRα, mPRβ, mPR, mPR and mPR). Interestingly, mPRα is expressed in neurons and, following an insult, it has its expression increased in glial cells, suggesting a role in neuroinflammation [4]. Nonetheless, the functions and intracellular pathways activated by PGRMC1 and 2 have not been fully elucidated. Recent evidence suggests that PGRMC1 acts as an adaptor molecule for mPR, facilitating its translocation to the plasma membrane. In this sense, non-classical progesterone actions are proposed to be initiated by the PGRMC1- mPR complex and not the result of receptor action alone [8,9]. Stimulation of mPR triggers many quick gene transcription-independent responses accompanied by increased intracellular Ca2+ concentrations and second messenger activation [10]. Indeed, cAMP and mitogen-activated protein kinase (MAPK) activation has been shown to promote CREB phosphorylation and regulate SRC2 co-activator activity [11]. Notably, these intracellular signaling cascades can trigger specific non-genomic responses or modulate genomic pathways [7]. For example, progesterone-mediated mPR activation leads to MAPK and protein kinase C (PKC) activation via cAMP, and mPRs also activate PI3K/Akt intracellular pathways. Simultaneously, phospholipase C (PLC) is activated, leading to intracellular Ca2+ store mobilization and increased cytosolic concentration of this cation [7,12].

It is relevant to point out that the hormonal activity of the neurosteroid allopregnanolone, an active metabolite of progesterone, was for a long time considered insignificant due to the lack of activity on classic PR. However, antiseizure activity, mediated by positive GABAA receptor modulation, has been reported for this steroid (for a review on allopregnanolone synthesis, mechanisms and effects see Diviccaro et al [13]). Moreover, there is evidence that allopregnanolone and its analog ganaloxone act by binding to the neuronal cell mPRs and inhibiting apoptosis [14]. Therefore, the combined GABAA modulation and the anti-apoptotic effect by mPRs stimulation respond to the complexity of allopregnanolone effects in the brain and will be discussed later in this review.

Regarding the regulation of production and release mechanisms, evidence supports that both progesterone and allopregnanolone increase during stress conditions in healthy humans, with a positive correlation between cortisol and progesterone levels. Progesterone has been especially linked to the willingness for social interaction, which supports the concept that allopregnanolone and progesterone release can ultimately lead to a decrease in anxiety and stress [15]. Moreover, the levels of the neurosteroids DHEA, DHEA sulfate (DHEAS), and allopregnanolone decrease during aging, increasing neuron vulnerability to toxic agents, which is associated with neuronal apoptosis and degeneration [16]. Therefore, the production and release of these neuroactive steroids could provide protection against neuron dysfunction and apoptosis, whereas its gradual reduction would contribute to the aging process.

Levels of neuroactive steroids, including progestogens, were shown to be altered under various experimental neurodegenerative conditions [17]. A variety of PRs is also expressed in both neurons and glia [12]. Interestingly, there is growing evidence that progesterone and other neurosteroids provide neuroprotection to the CNS and PNS through several mechanisms.

Alzheimer's disease (AD) is a neurodegenerative condition characterized by a progressive cognitive decline. The onset and progression of this disease are associated with extracellular deposits of amyloid-beta (Aβ) protein and intracellular deposits of hyperphosphorylated tau protein. Lower neurosteroid levels were observed in several brain regions of AD patients than in nondemented patients.

3.1 Evidence of progestogens modulation of cognition and AD-related proteins in preclinical studies
3.2 Neuronal metabolism and bioenergetics
3.3 Progestogens in epidemiological studies and clinical trials

Parkinson's disease (PD) is a movement disorder characterized by tremors, rigidity, and bradykinesia. Due to the loss of dopaminergic neurons in the Substantia nigra pars compacta (SNpc), reduced dopamine in the striatum, and intracellular α-synuclein inclusions, PD is classified as a neurodegenerative disorder.

Huntington's disease (HD) is a progressive neurodegenerative disease caused by a polyglutamine repeat in the huntingtin gene, ultimately transcribed and translated into mutant huntingtin (mHtt) protein. This disease leads to a progressive loss of striatal GABAergic neurons, causing cognitive, neuropsychiatric, and motor impairments such as tremors, chorea, and dystonia. Both genders have equal prevalence because of their inherited autosomal dominant pattern, but neurosteroids such as estrogens have provided neuroprotection in experimental models [86,108].

Amyotrophic Lateral Sclerosis (ALS) is a fatal neurodegenerative disorder also known as motoneuron disease or Lou Gehrig's disease. It causes the progressive death of motoneurons from the brain stem and spinal cord, leading to several symptoms such as muscle spasms, weakness and atrophy, pain, cognitive and emotional alterations, and respiratory failure. The latter is commonly the cause of death between, 3-5 years from final diagnosis [111,112].

This review summarized preclinical and clinical studies addressing the progestogen potential for some of the most common neurodegenerative diseases: AD, PD, HD, ALS, and MS. There are still many challenges from basic experimental science to clinical translation for effective HRT in neuroprotection. For example, evidence from animal models demonstrates that cyclic administration of progesterone and estrogen resembling the natural menstrual cycle yields better results than continuous treatment [38]. Also, the benefits of HRT seem to be higher with early initiation around menopause rather than late usage [73–75]. Thus, estrogen-combined and cyclic treatment of progestogens in early menopause might provide important results in clinical trials for neurodegenerative disorders. Some studies reveal a promising profile for natural progesterone with regard to AD risk and progression than synthetic progestins, especially MPA, which appears to increase the risk [75,78,80]. Nestorone shows a promising profile for ALS in preclinical studies [111,125]. In addition, the progesterone metabolite allopregnanolone showed very promising results in preclinical studies and the ongoing and future trials may confirm its regenerative potential.

In summary, despite reports of non-effectiveness or reversion of beneficial estrogen-related effects, preventive and therapeutic use of progesterone, allopregnanolone, and synthetic progestins are important to be considered in future studies, regarding the mechanism of action, once it may modify the course of some neurodegenerative conditions. In this sense, dose, administration regimen, timing, the involved complex intracellular signaling pathways, and the potential benefits of post-menopausal progestogen therapy need to be more thoroughly evaluated, especially when administered in combination with an estrogen. 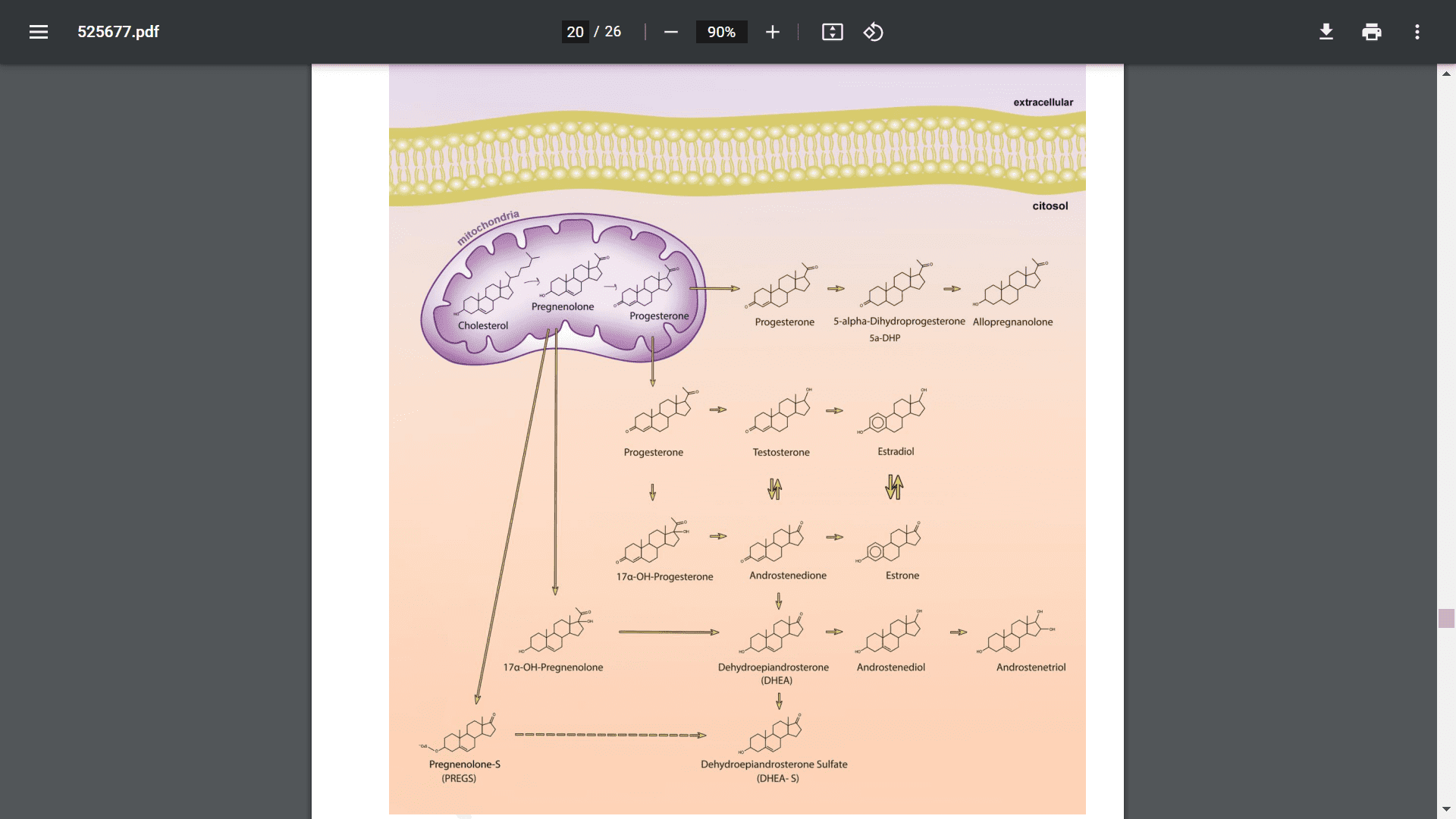 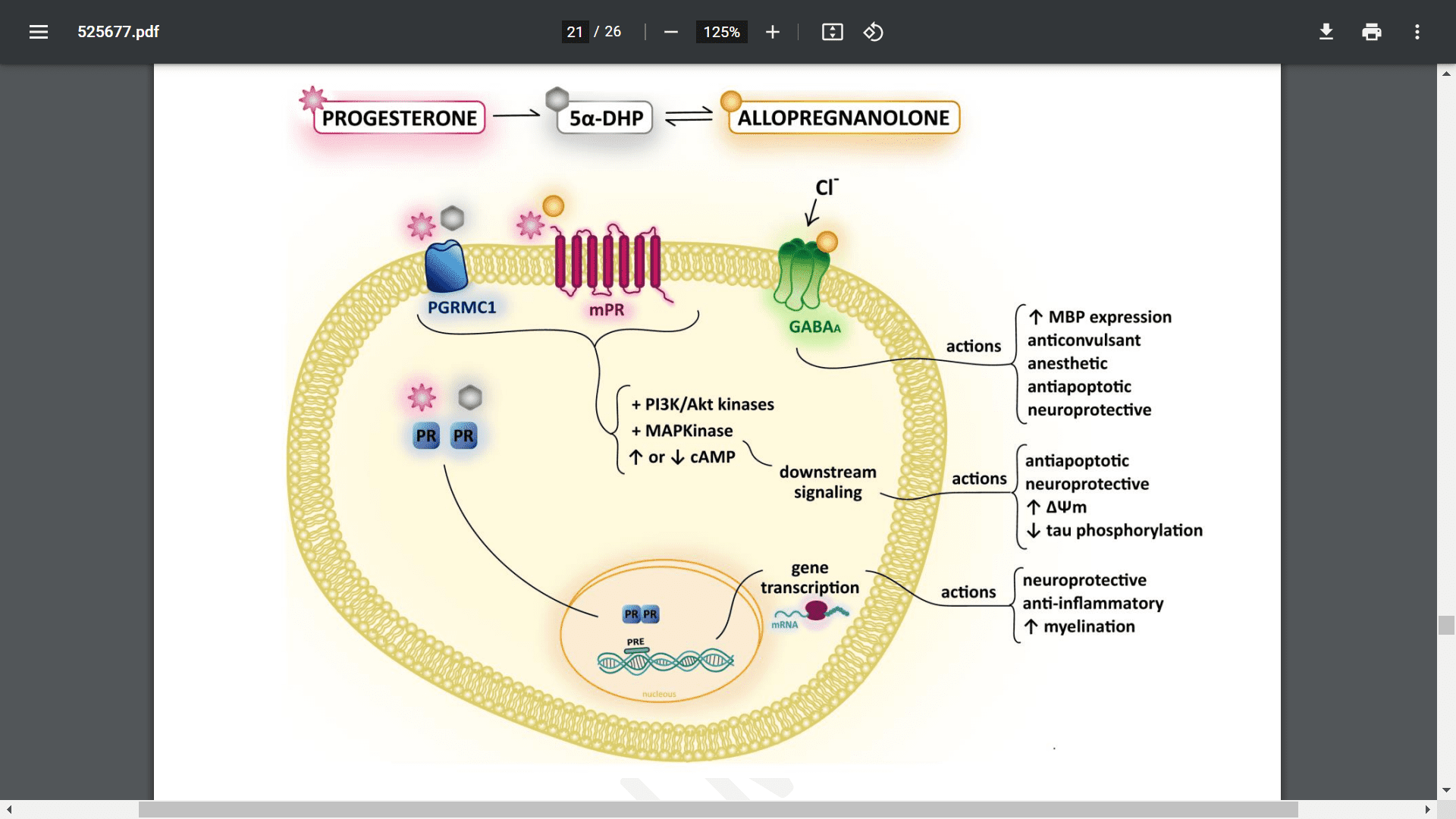 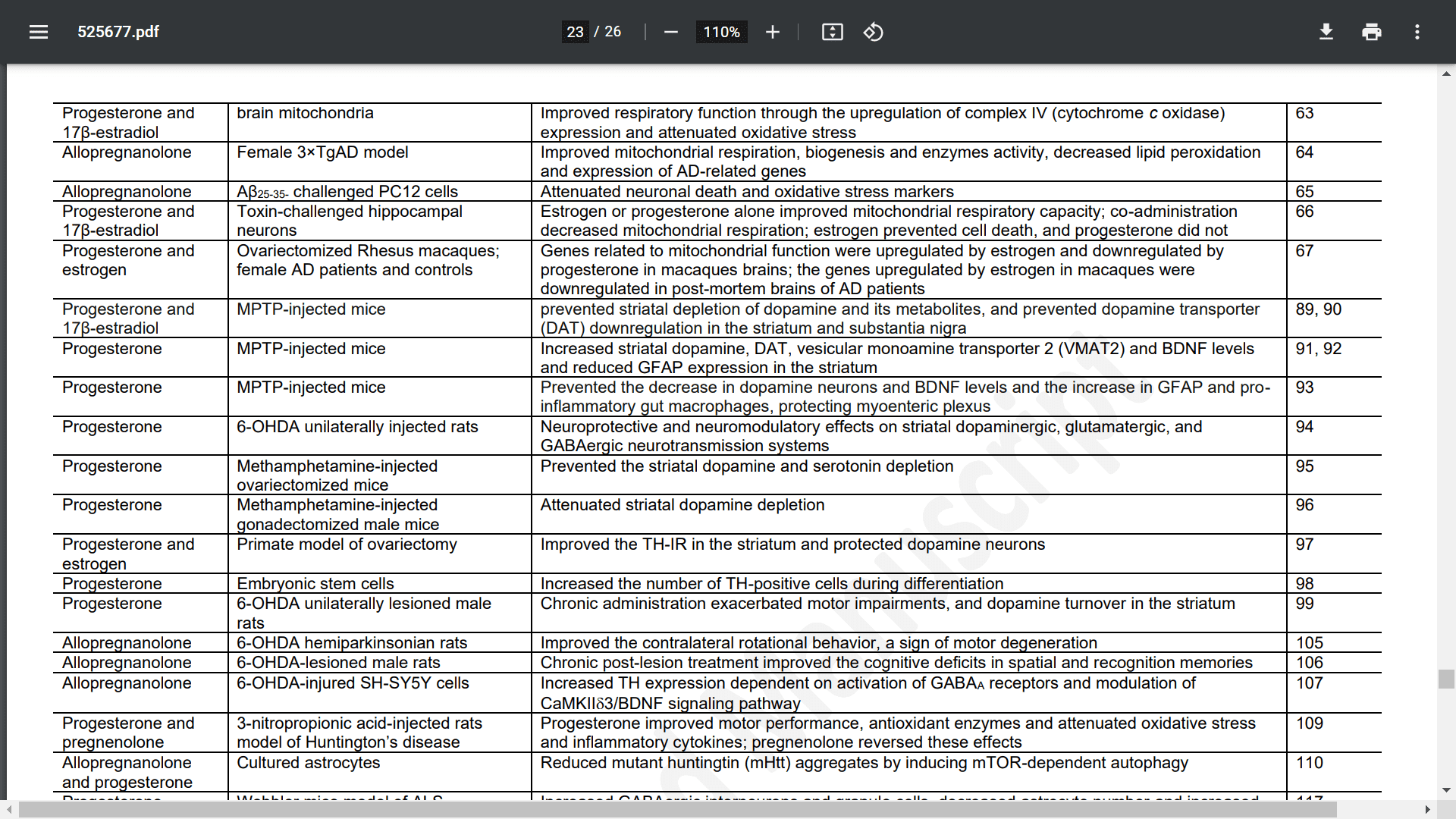 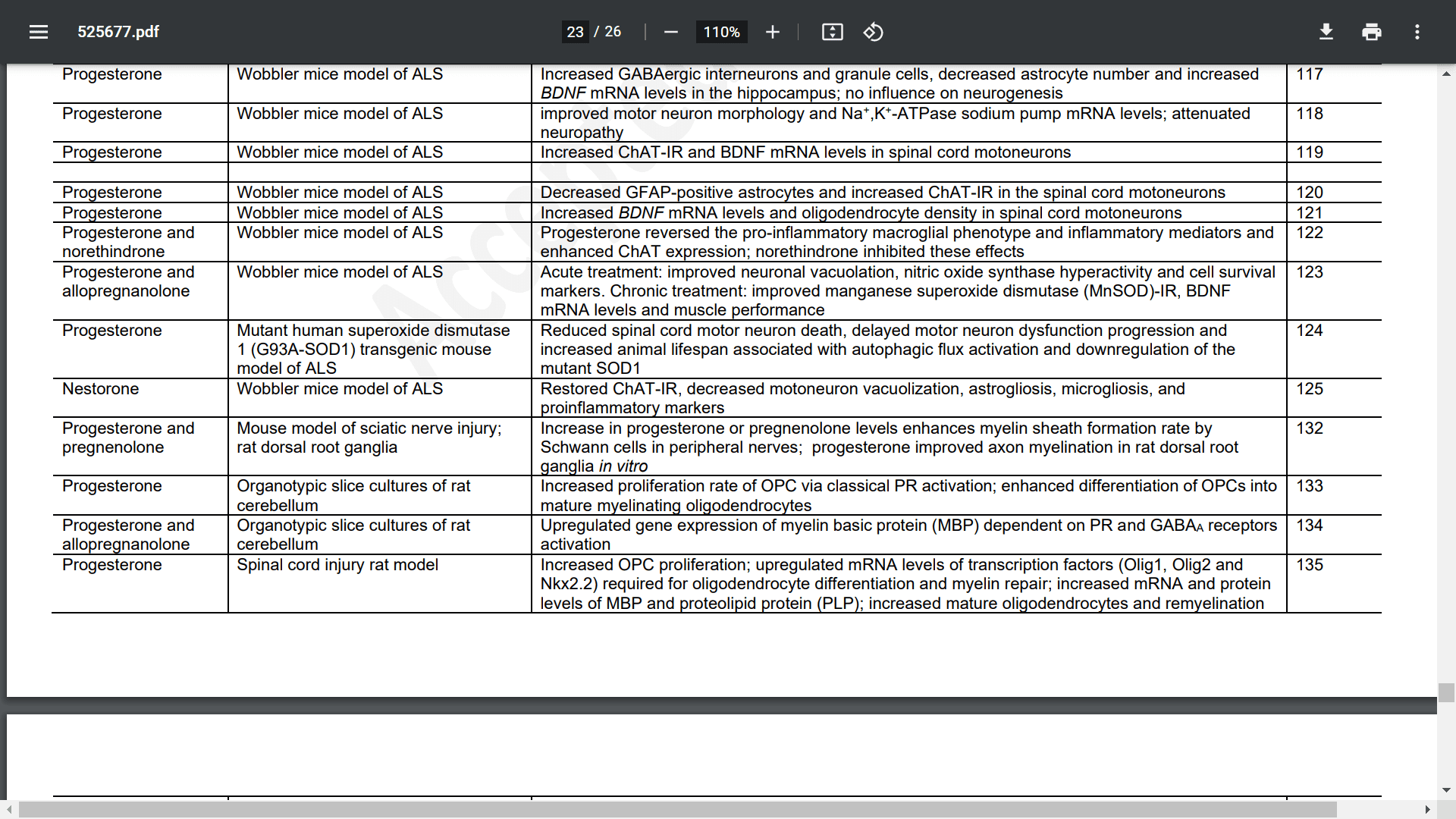 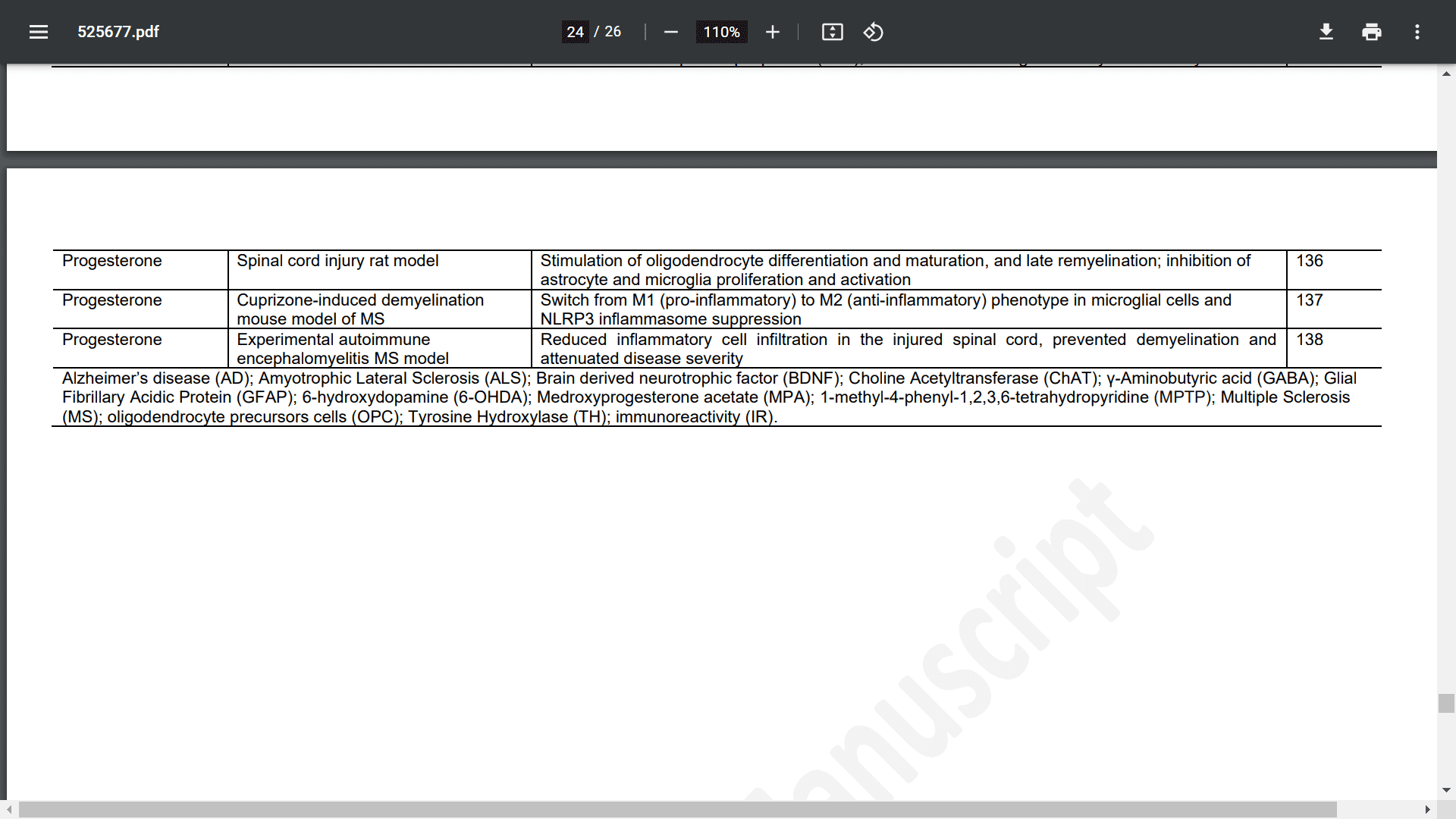 Table 2. Epidemiological studies and clinical trials associating HRT with the risk to develop neurodegenerative diseases or modify the disease course 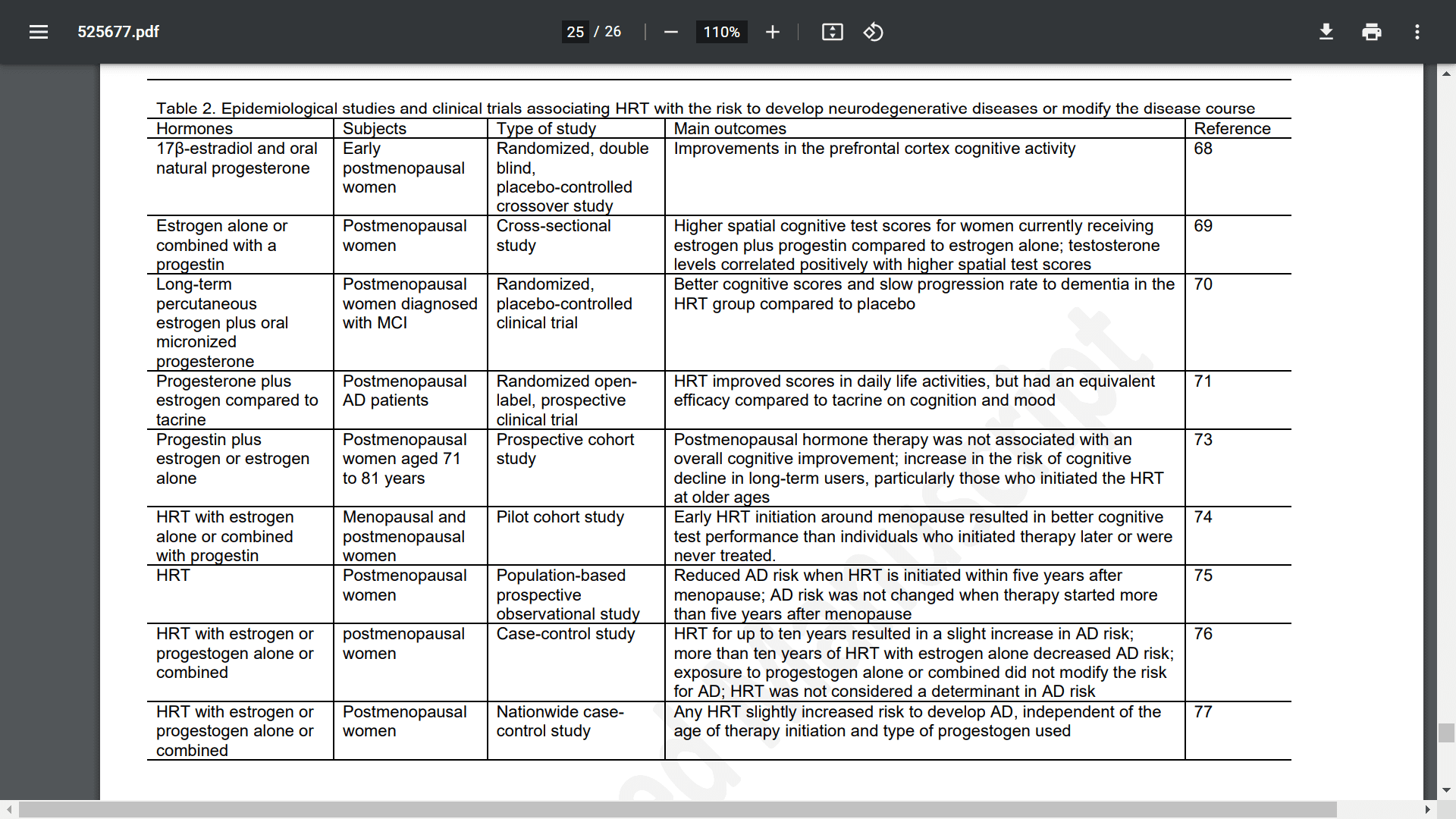 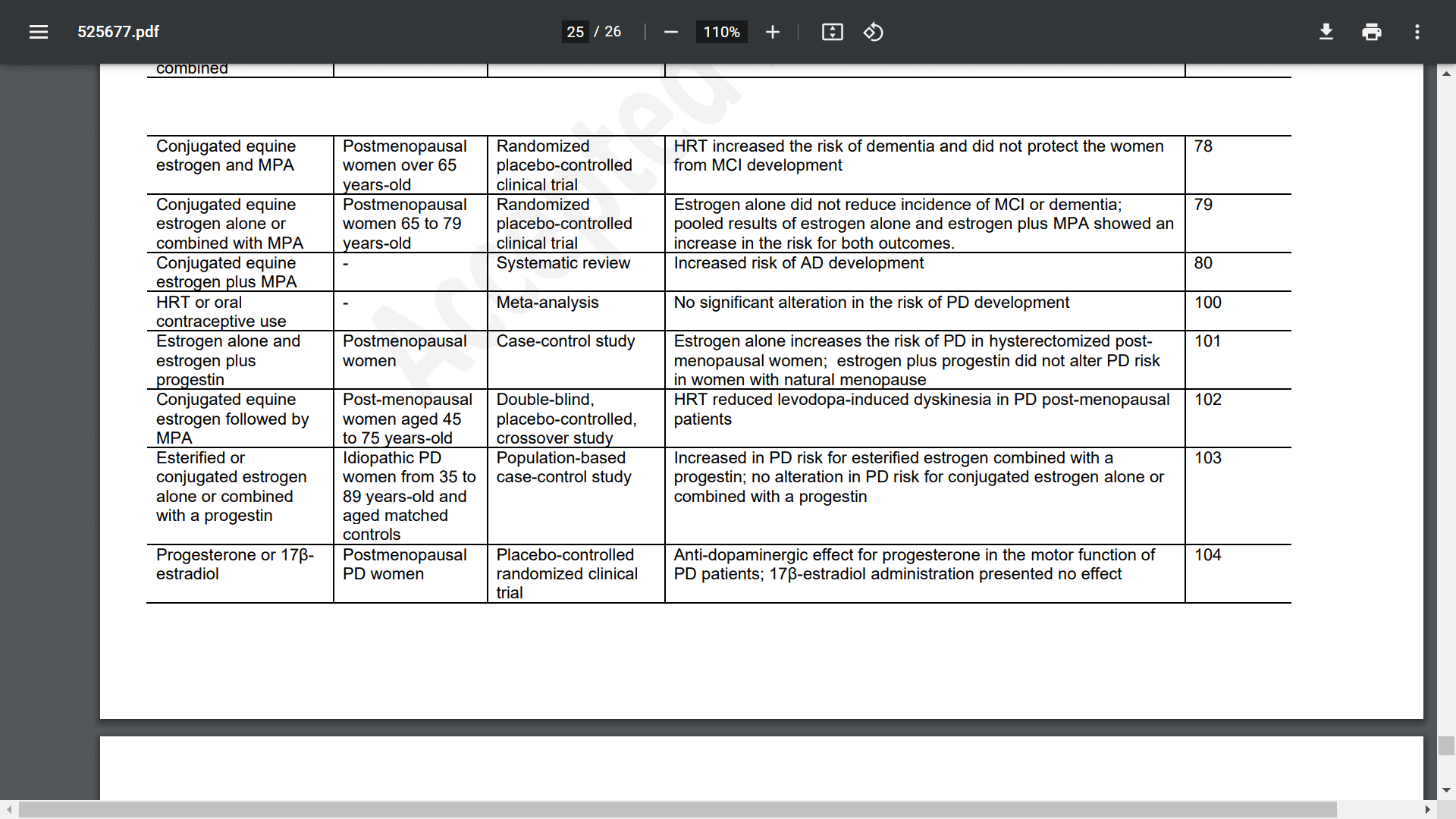 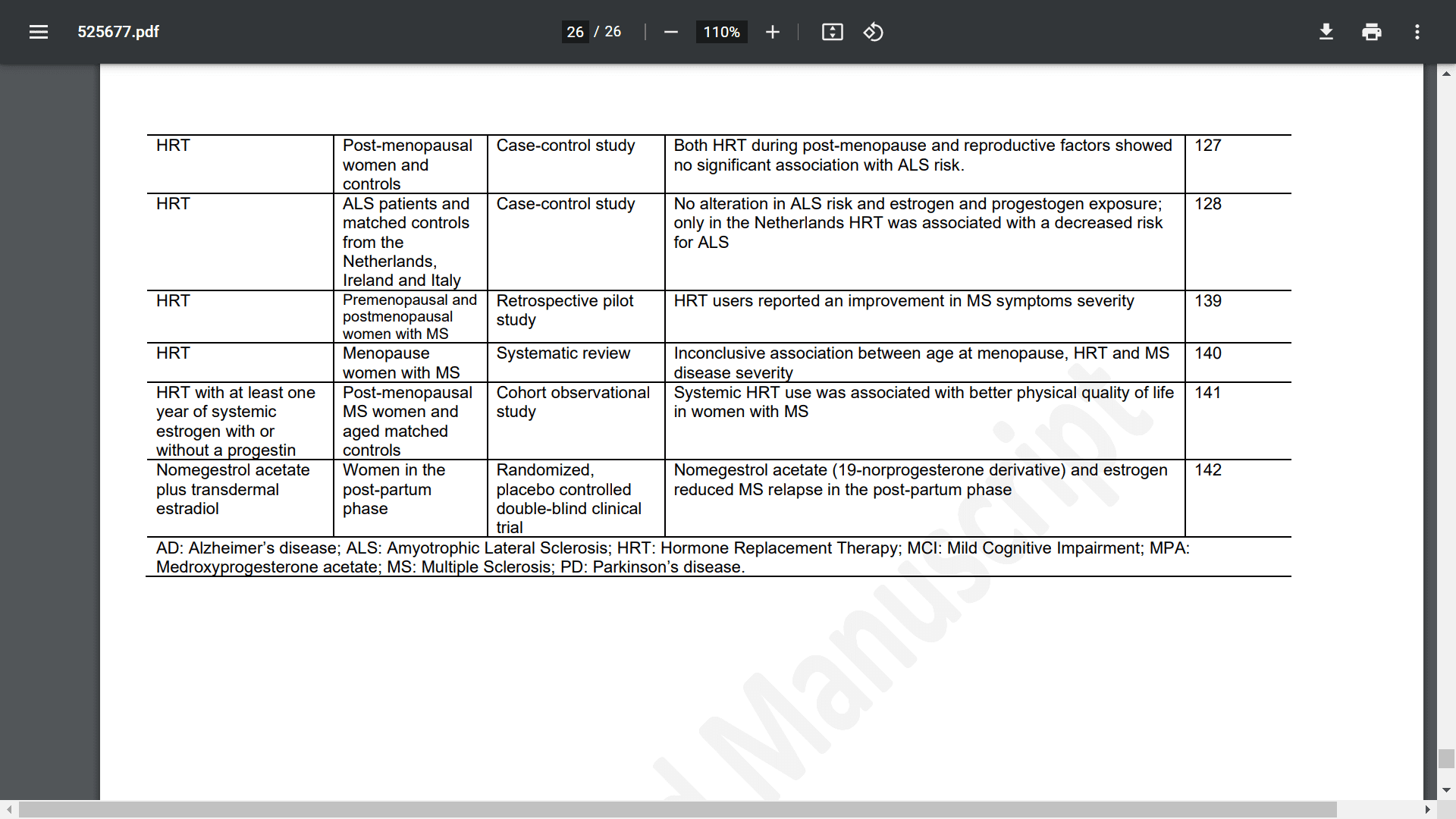