Penile rehabilitation stimulates and accelerates recovery of ED after RP

Radical prostatectomy (RP) represents one of the most commonly used first-line treatment modalities in men with localized prostate cancer. One of the most feared post-surgical complications is erectile dysfunction (ED), usually caused by direct damage to the cavernous nerves or due to neuropraxia. Penile rehabilitation is an emerging concept that was proposed to stimulate and accelerate the recovery of erectile function after RP. The goal is to improve blood flow to the penis, increasing cavernous oxygenation and avoiding fibrosis. The most commonly used modalities include oral phosphodiesterase type 5 inhibitors (PDE5-I), vacuum erection devices (VEDs), intracorporeal injection (ICI) therapy, medicated urethral system for erections (MUSE), and a combination of these treatments. For those patients with severe ED, ED refractory to medical therapy, and/or seeking long term reliable results, the penile prosthesis implant remains an excellent alternative. We conducted a broad review of post-prostatectomy ED prevalence with different techniques and the success rates of the different therapeutic approaches.

Prostate cancer (PCa) is the second most common cancer in American men. According to the American Cancer Society, about 191,930 patients will be diagnosed with PCa in the US in 2020 [1]. Currently, radical prostatectomy (RP) represents one of the most commonly used first-line treatment modalities in men with localized PCa [2]. For the past twenty years, functional outcomes have gained special importance and have become the means to measure surgical quality. One of the most concerning post-surgical complications is erectile dysfunction (ED) [3]. Post-RP ED is related to the injury of the cavernous nerves, incomplete nerve‐sparing surgery, or neuropraxia - stretching, heat, and direct trauma to the nerve [4]. Corroborating this idea, previous studies have shown that erectile function (EF) can improve during long-term follow-up [5, 6].


EF is complex, dependent on central and peripheral mechanisms that include spinal tracts, nerve bundles, vascular compartments, and smooth muscle cells [28]. The spinal pathways involve both parasympathetic and sympathetic communication to promote and maintain a successful erection for intercourse [28]. The pelvic plexus located in the posterolateral wall of the prostate has been shown to be composed of both parasympathetic and sympathetic tracts providing autonomic innervation to the corpora cavernosa [29]. During RP, these cavernous nerves may be transected or damaged [29]. Nerve-sparing RP (nsRP) has provided an amelioration in potency induction post-RP (Table 1). Nonetheless, ED is still evident in many patients even when undergoing bilateral nsRP, suggesting that ED is not only attributed to nerve injury [30]. Interestingly, Mulhall et al. [31] showed that patients undergoing bilateral nsRP may have either arterial or venous insufficiency, proposing a vascular component in the pathophysiology of ED. Maintenance of the appropriate oxygen levels in the corporal environment has been suggested to play a role in the prevention of corporal fibrosis [32]. TGF-Beta has been shown to promote corporal fibrosis in hypoxic states through the induction of collagen deposition in cavernosal smooth muscle cells [33]. Vascular changes associated with RP [31] may theoretically induce a hypoxic environment which may cause cytokine release resulting in cavernosal fibrosis. Additionally, previous studies advocated that neuropraxia can cause a long-term low oxygen tension state in the flaccid penis, possibly resulting in smooth muscle apoptosis and fibrosis [33, 34]. These irreversible changes can produce veno‐occlusive disruption [35]. Since this cascade of events is related to an initial nerve injury, the changes are most pronounced with bilateral nerve damage. Therefore, the first step in preserving EF relies on the surgical technique [29] along with new technologies that enhance the surgeon’s perception in the operative field [36]. After the procedure, most patients will experience a gradual return of EF and, although it can take over 2 years [6], few patients will return to their baseline EF [37]. For this reason, penile rehabilitation has been proposed to stimulate and assist in the recovery of EF after RP. The main goal is to restore satisfactory EF, based on the enhancement of corpora cavernosa oxygenation and interruption of cavernous nerve injury-induced structural changes of the penile tissue [38]. The most common methods used in penile rehabilitation after RP include oral phosphodiesterase type 5 inhibitors (PDE5- I), vacuum erection devices (VEDs), intracorporeal injection (ICI) therapy, a medicated urethral system for erections (MUSE), and a combination of these treatments [39, 40] as summarized in Table 2. Lamentably, limitations, and contrasting results from previous studies complicate the elaboration of a guideline for clinical practice. Finally, the surgical approach to implant a penile prosthesis is recommended to patients that have failed medical therapy nor are satisfied with results and delivery routes. The objective of this study is to conduct a broad review to evaluate the effectiveness and success rates of different therapeutic modalities for the management of post-RP ED.

ED is a reality for men in the post-RP follow-up, with a prevalence ranging from 10–82%, and this complication should be addressed in preoperative counseling. The best outcomes for the management of post-RP ED combine adequate pre-and postoperative care, psychosocial support, and refined surgical technique, but there is still not enough evidence to support RARP over RRP. One significant obstacle for postoperative care is the lack of a standardized and objective definition to accurately determine baseline EF and postoperative ED. This makes it challenging to tailor treatment, manage expectations, and monitor progress in men who suffer from post-RP ED. Nevertheless, treatment remains unquestionably superior to no intervention, and the maintenance of adequate blood flow to the penis regardless of the chosen treatment should be the focus. Urologists should consider the use of minimally invasive penile rehabilitation protocols such as concomitant use of PDE5-I and VED as first-line options, with the more invasive procedures such as ICI, intraurethral suppository, and penile implant being second-line choices. The process of rehabilitation should be initiated as early as catheter removal or during the first-month post-RP. Urologists should expect that patients with previous normal EF will spontaneously recover EF in 22% of cases. When choosing treatment, patients can expect a 25% recovery in EF within the first 9 months with PDE5-I, a wide range of 25–75% after 2 years with PDE5-I or with VED, and 67% with ICI. Although MUSE did not show a significant difference when compared to PDE-5 inhibitors, the drop-out rate was considerably higher (30%). Additionally, psychological and sexual counseling has shown additional improvements and increased adherence for rehabilitation and treatment strategies of post-RP ED. For those patients with poor preoperative EF, non-responders, and those with non nerve sparing intervention, the penile prosthesis implant remains a long-term, highly satisfactory intervention. 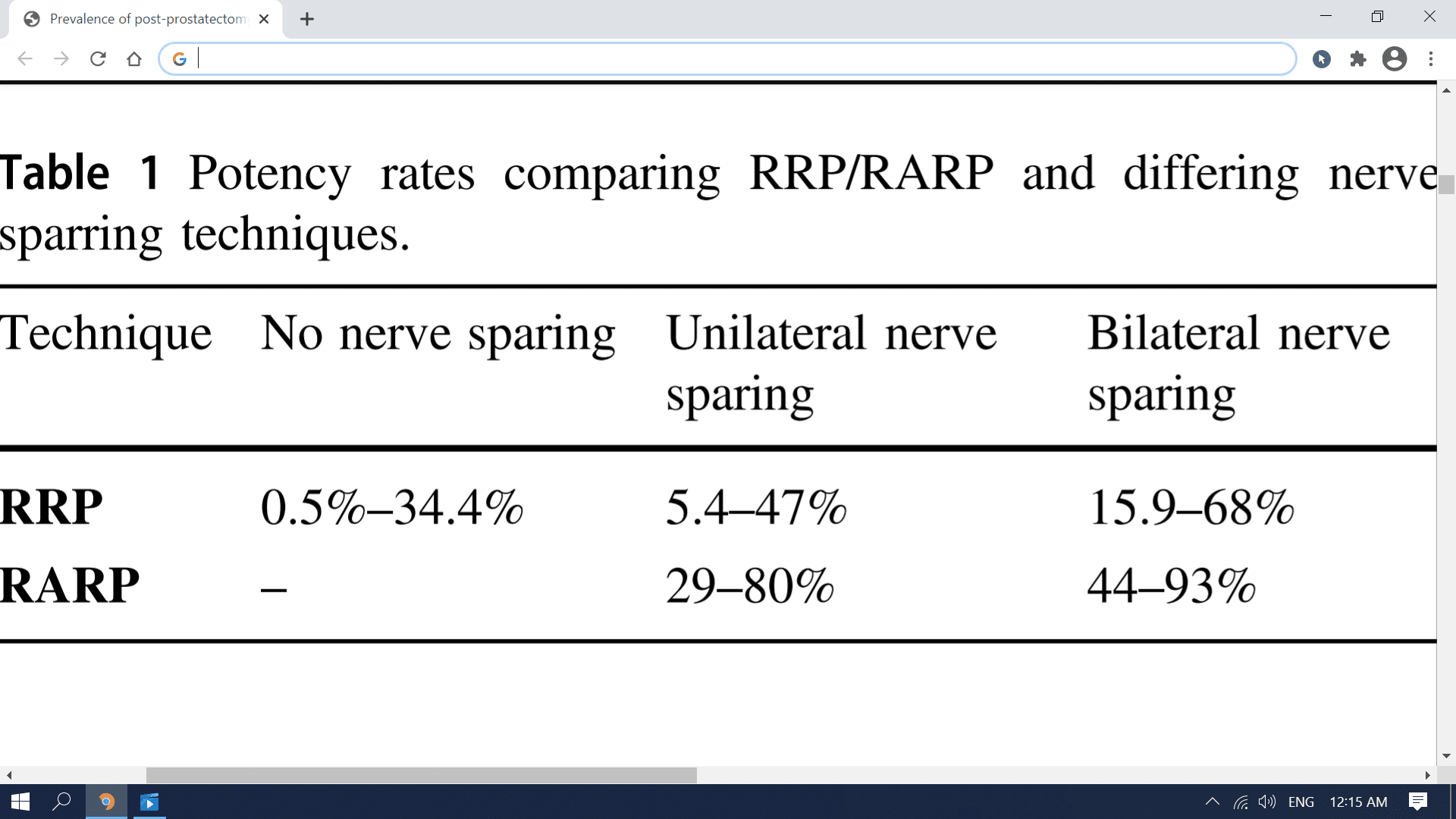 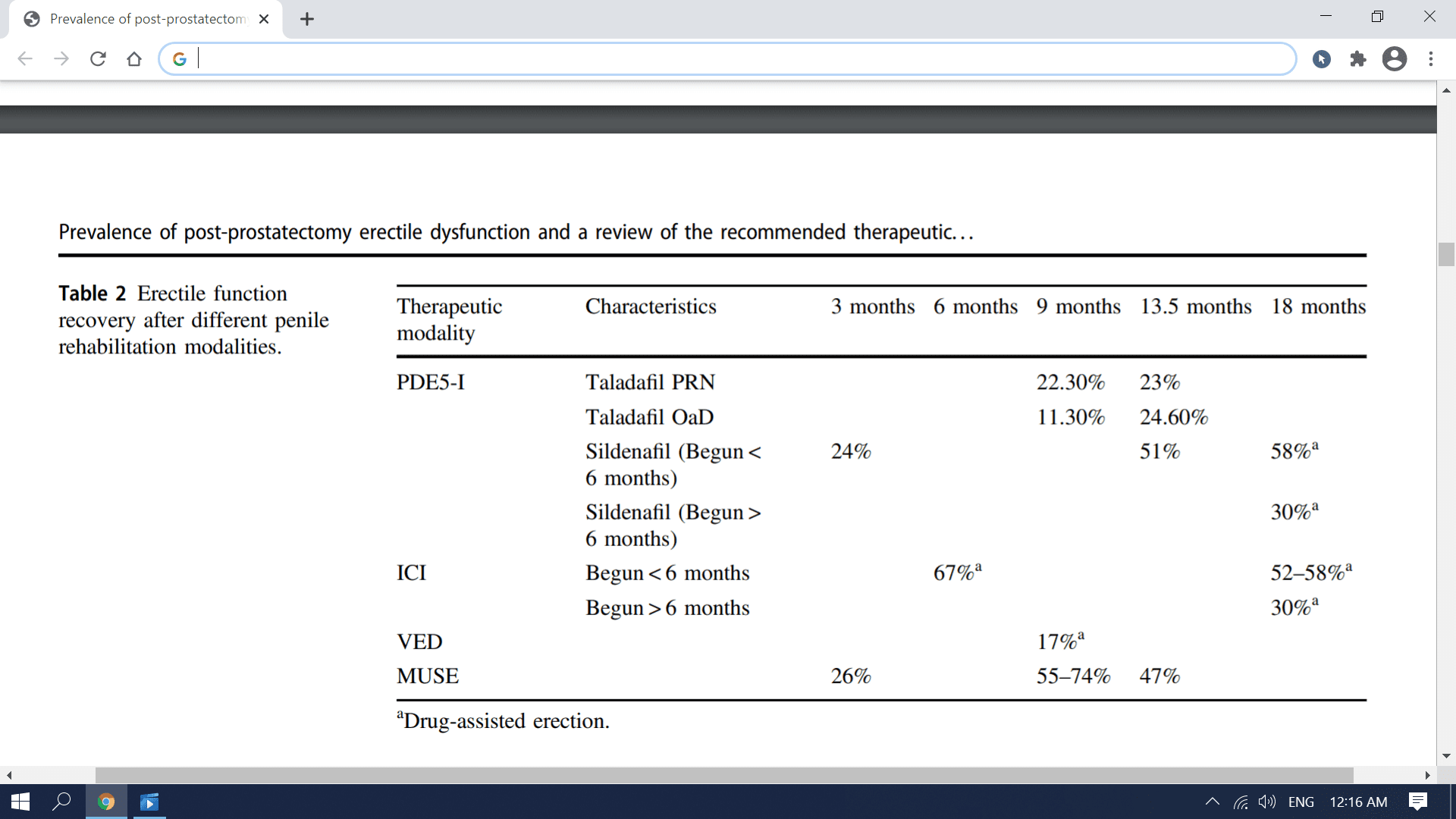