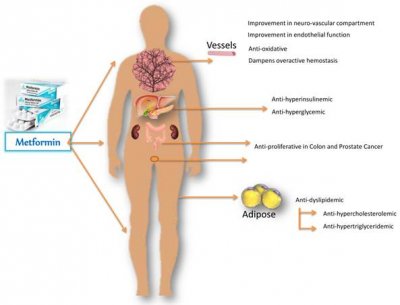 Since the discovery of Metformin (way back in 1922), the medication has become one of the most vital medications in the world. The WHO has included it in its List of Essential Medicines among other drugs used to provide basic healthcare, and it is currently the most widely used oral diabetes medication.

But what Jean Sterne, its creator, might not have realized is that Metformin can offer A LOT of amazing health benefits beyond just the treatment of diabetes! Here are just a few of the amazing things Metformin can do to keep you in the prime of health:

It's a well-known fact that insulin resistance (the precursor to diabetes) can lower the size and function of the thyroid gland. Even pre-diabetics may suffer from reduced thyroid function, including low levels of both T3 and T4 thyroid hormones.

A 2014 study in the Journal of Research in Medical Sciences examined the effects of Metformin on thyroid function. 89 prediabetics between the ages of 18 and 65 participated in the study, and received either a placebo or Metformin for 3 months. To determine the effects of the drug, the scientists measured TSH levels, as well as measuring thyroid nodules and volume.

The primary difference between the two groups was discovered in the thyroid enlargement effects. Not only did the placebo group have a higher rate of enlargement, but 54% of them developed thyroid nodules. Among the Metformin group, small solid nodules decreased by almost 50% (from 0.07 ml to 0.04 ml).

While TSH levels did decrease slightly (for those with serum TSH >2.5 &#956;U/ml), the medications proved effective at protecting the thyroid gland and reducing the size of nodules.

Men with metabolic syndrome usually tend to have a higher body fat percentage, which has been linked to lower testosterone levels. Low T often leads to a reduction in sperm production, count, and quality.

One study looked at the effects of Metformin on both testosterone levels and sperm count and quality. 45 men between the ages of 26 and 44 participated in the study. All of them underwent metabolic and hormone profiling, along with an evaluation of their BMI, triglyceride levels, and waist circumference.

Increases the Effects of TRT

While studies have examined the effects of Metformin, no research has analyzed what happened when it was combined with testosterone therapy. Until 2015, when a group of researchers gathered 30 men with both late-onset hypogonadism and impaired glucose tolerance.

The men all underwent 12 weeks of Metformin treatment, with only half of them receiving testosterone (in the form of 120 mg of oral testosterone undecanoate per day). The effects of the treatment were significant:

While Metformin alone did provide some benefits, the combination of androgen therapy and Metformin significantly increased the effects of the treatment. Men suffering from impaired glucose tolerance and/or late-onset hypogonadism should consider the combined treatment in order to see more visible results.

where to buy metformin without a script

Age comes to all men! The human body begins to decline by our mid-30s, and the decline can become serious as the decades advance. While there is no way to “turn back the clock” for real, there are a few things that can help to prevent or reduce the effects of aging.

Scientists are planning to use Metformin as part of a program designed to “target” or “tame” aging. One study found that diabetics who took Metformin lived longer than those who took another diabetes drug. More noticeably, those who were significantly older (70s+) had a lower diabetes mortality risk when taking Metformin. Another study found that taking Metformin could help to stave off diabetes even among high-risk patients, especially when the treatment was combined with healthy lifestyle changes.

Metformin targets chemicals that are produced by senescent cells—essentially cells that have stopped working properly (dividing) and have begun to release toxins that damage the cells around them.

These senescent cells are common among those with age-related chronic disease, such as those suffering from excessive arterial plaque or Alzheimer's. By reducing the toxin output of these senescent cells, there is a possibility metformin could help to reduce the effects of aging. The drug also increases AMP kinase, an enzyme that tends to decline as you grow older. It may help to decrease mTOR, a protein that is responsible for cellular growth.

The combination of these effects makes Metformin a potential treatment to reduce the effects of aging. It won't make us live forever, but it could slow down the advance of the years.

People suffering from HIV often suffer from lipodystrophy, a combination of insulin resistance and fat redistribution. This means that HIV can lead to metabolic disturbances that further impair the health of the infected.

In a study posted in the Journal of the American Medical Association, patients who received Metformin for 3 months not only showed between insulin control, but their weight and blood pressure decreased as well. They also lost belly fat, but without an increase in liver transaminase or lactate levels. Even a low dose of metformin can help to improve cardiovascular health, reduce metabolic disturbances, and increase fat burning among HIV-infected patients.

I wonder how much they took in each section of this study? My eurologist/trt doc put me on met, , but it made me dizzy as hell.... wonder why?

Metformin will decrease vitamin b12 serum, so I always have my levels checked.
C

What dose? Yes, this can be a problem. 500 mg twice per day with meals is the standard starting dose.

I don't remember the dosage. She was on it for years and the doctor would adjust the dosage periodically, but it tore her stomach up regardless of the changes.
T

Ask for Metformin ER (Extended release) most of the side effects will be gone if you change to ER.
C

Tommy Wall said:
Ask for Metformin ER (Extended release) most of the side effects will be gone if you change to ER.
Click to expand...

Good to know, if she ever needs to go back to it. For now she is happy with her current protocol.
K

J2048b said:
I wonder how much they took in each section of this study? My eurologist/trt doc put me on met, , but it made me dizzy as hell.... wonder why?
Click to expand...

If you click on the colored links for each of the studies, some info with regard to dosage can be found.

For the TRT/metformin study it was 1700 mg/day, which is the same dosage being used in one of the longevity studies. Typical doses are 1000-2500 mg/day with some reports that the drug is not as effective below 1500 mg/day.

If you use the ER (Extended Release) form of Metformin you can avoid this nasty side effect.
D

I've been taking metformin for the past 5 days. I've got some stomach cramps but they are managable. The worst thing is that is seems to kill my appetite. It must be great for people on a diet. I take 1000 mg per day and i'm planning to increase the dosage to 1500 like my doc said. I hope my body builds some kind of tolerance.
F

Everything looks great. But I have a full head of hair and the first after a few weeks of using Metformin my hair started really coming out. Can anything be done about this? Also, when I switched from "ER" Extended Release is totally eliminated any stomach or diarrhea problems for those posing the questions. The hair part bothers me.

Also, am I supposed to take B12 supplements? If so, any particular brands and how much daily?

I do supplement with Jarrow methyl B-12, I do think it's important to get your levels checked. I thought everyone used ER metformin?
J

ok so my doc who is my trt doc prescribed me met er, but im not sure how to take it.... reason y:

do u take it before a carb meal? after a carb meal or what? what sides should i be looking for and what will it interact with according to the people here ? what have u taken with it, that it did not mix well with?

Take ER Metformin usually with an evening meal. I split mine twice a day, 750 after breakfast and 750 after dinner. But I can take 1500 after one meal.
T

Vince said:
Take ER Metformin usually with an evening meal. I split mine twice a day, 750 after breakfast and 750 after dinner. But I can take 1500 after one meal.
Click to expand...

Does the ER help with lipids and give you same benefits?
E

Yes it works the exactly the same - just an extended release of the drug instead of all at once.

I agree with ERO
C

tjlab said:
Does the ER help with lipids and give you same benefits?
Click to expand...

And is less of a problem in the stomach/colon if you are prone to such upsets.