Effects of creatine supplementation on sarcopenia, osteoporosis, frailty, and Cachexia?

Sarcopenia refers to the age-related reduction in strength, muscle mass, and functionality which increases the risk for falls, injuries, and fractures. Sarcopenia is associated with other age-related conditions such as osteoporosis, frailty, and cachexia. Identifying treatments to overcome sarcopenia and associated conditions is important from a global health perspective. There is evidence that creatine monohydrate supplementation, primarily when combined with resistance training, has favorable effects on indices of aging muscle and bone. These musculoskeletal benefits provide some rationale for creatine being a potential intervention for treating frailty and cachexia. The purposes of this narrative review are to update the collective body of research pertaining to the effects of creatine supplementation on indices of aging muscle and bone (including bone turnover markers) and present possible justification and rationale for its utilization in the treatment of frailty and cachexia in older adults.

Sarcopenia, commonly defined as the age-related decrease in strength, muscle mass, and functionality, is associated with osteoporosis, frailty, and cachexia [1]. Furthermore, sarcopenia increases the risk of falls, injuries, fractures, and premature mortality [2]. The etiology and pathophysiology leading to sarcopenia are multifactorial and include alterations in skeletal muscle protein turnover and balance, endocrinological processes, neurophysiology, inflammation, vascularization, and mitochondrial function [3]. Sarcopenia occurs in 5–17 % of community-dwelling aging adults and 14–85 % of those residing in long-term care facilities [4]. With estimates that by the year 2050 there will be 1.5 billion adults ≥65 years of age [5], the prevalence of sarcopenia will continue to rise for the foreseeable future. Therefore, identifying treatments to overcome sarcopenia and associated age-related conditions is critically important from a global health perspective.

We have previously discussed and summarized the small body of research showing some favorable effects of creatine monohydrate supplementation on indices of aging muscle and bone (for reviews see [1,6,7]). Overall, creatine (primarily when combined with resistance training) has been shown to increase measures of muscle accretion, strength, and functionality [6–10]. Creatine has also been shown to increase bone area [11,12] and strength [13], attenuate the rate of bone mineral loss [13], and influence bone turnover by reducing the urinary excretion of cross-linked N-telopeptides (NTx) or C-telopeptides of type I collagen (CTx) in older adults [14]. Assessing bone turnover markers (i. e., NTx, CTx) is clinically relevant as they provide important information regarding the bone remodeling process and predict the risk of osteoporotic fracture in older adults [15]. Based on these musculoskeletal benefits, it is highly plausible that creatine may be an effective intervention to treat frailty (characterized by muscle weakness) and cachexia (characterized by rapid muscle wasting). However, research in these clinical areas is minimal.

The purposes of this narrative review are to (1) expand on our previous publications [1,6,7] and further update the collective body of research pertaining to the effects of creatine supplementation on indices.

2.2. Creatine supplementation combined with other compounds and resistance training

Osteoporosis is characterized by the age-related reduction in bone mineral density and microarchitecture which can increase the risk of falls and subsequent fractures [39]. In this section, we review the effects of creatine supplementation on bone, falls, and fracture risk. We have reviewed evidence from cellular studies, animal models, and human interventions.

Frailty is overarchingly described as a condition of musculoskeletal weakness and reduced function. Though several definitions and screening criteria exist, frailty has generally been used to broadly define older adults impacted by weight loss, functional deficits, fatigue, cognitive impairment or mood disorders, comorbidities, and poor nutritional status [68]. Ultimately, frailty is considered to be a state of increased vulnerability (particularly to adverse health outcomes) that is associated with an increased risk of falls, disabilities, lack of independent living, and mortality [69,70]. Recognized as an aging condition, recent estimates suggest that approximately 1 in 6 community-dwelling older adults can be characterized as frail [71]. Others have identified the prevalence of frailty as up to ~59 % in older populations [72]. Consequently, the alarming incidence of frailty in older adults underscores the importance of maintaining and/or increasing muscle mass, strength, and physical function in individuals with frailty to preserve the health-related quality of life.

Cachexia is used to define a complex, multifactorial, and often aggressive muscle-wasting condition, characterized by progressive weight loss (with or without fat loss), that cannot be reversed with conventional nutritional support [80,81]. Cachexia is strongly associated with a poorer prognosis, worsening of physical function and quality of life (QOL), and reduced survival in a variety of populations, such as cancer, chronic kidney disease, and heart failure [82–85]. Cachexia can arise due to a combination of factors, including systemic inflammation, reduced protein synthesis, and/or an increase in catabolism, along with malnutrition and physical inactivity [86–89].

The current body of research indicates that creatine monohydrate supplementation, primarily when combined with resistance training, is a viable lifestyle intervention to improve aging muscle mass, strength, and measures of functionality, which may decrease the risk of falls and fractures in older adults. The combination of creatine and resistance training has some beneficial effects on aging bone. However, these benefits disappear when no exercise intervention is used. Despite having some musculoskeletal benefits, the effects of creatine supplementation in individuals diagnosed with sarcopenia, osteoporosis, frailty, and cachexia are relatively unknown. Long-term, large-scale RCTs are needed to determine the efficacy of creatine supplementation, with and without resistance training, in these clinical populations.

Table 1 Study characteristics and outcomes of research examining the influence of creatine with a resistance training program on muscle in older adults. 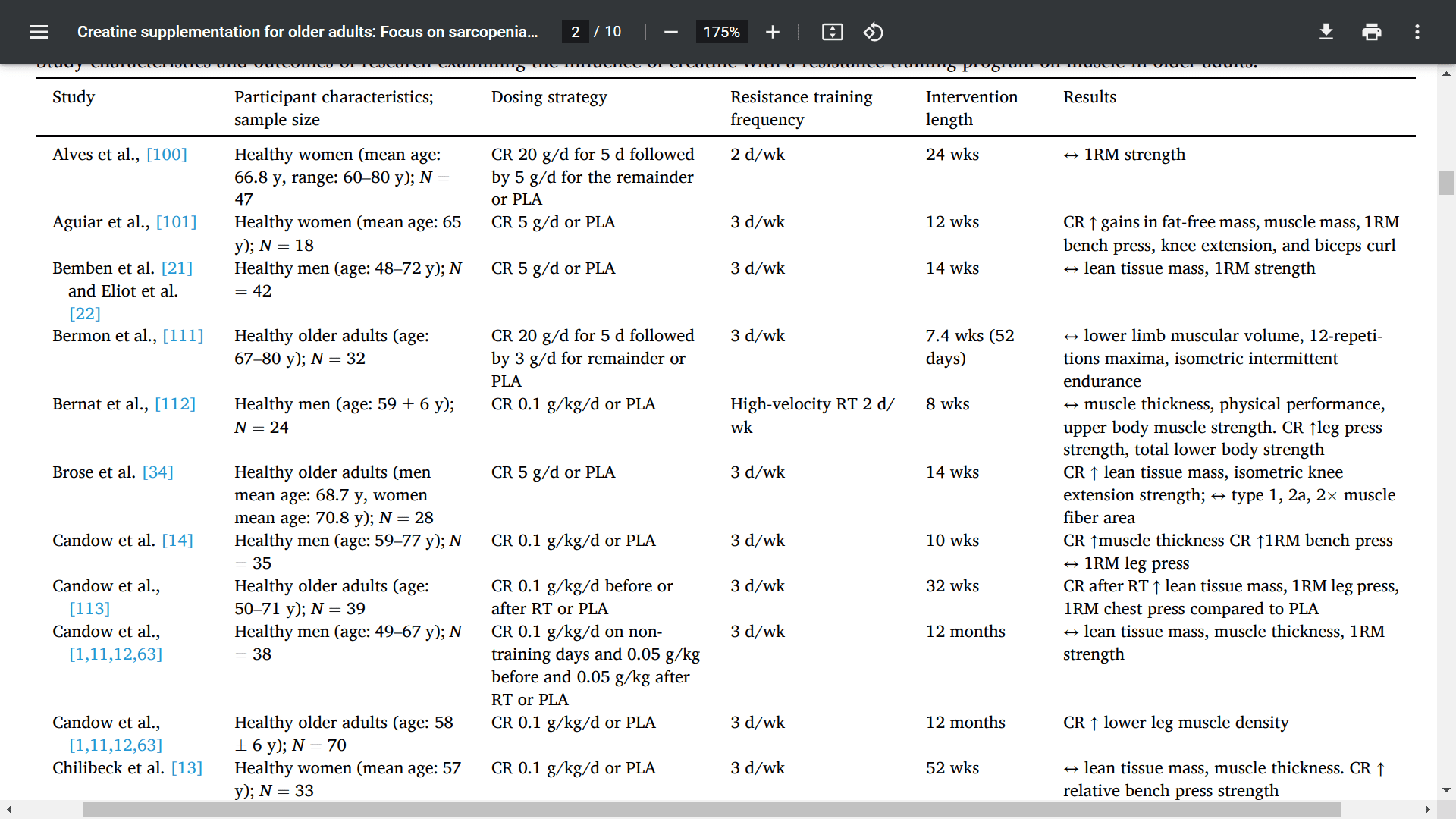 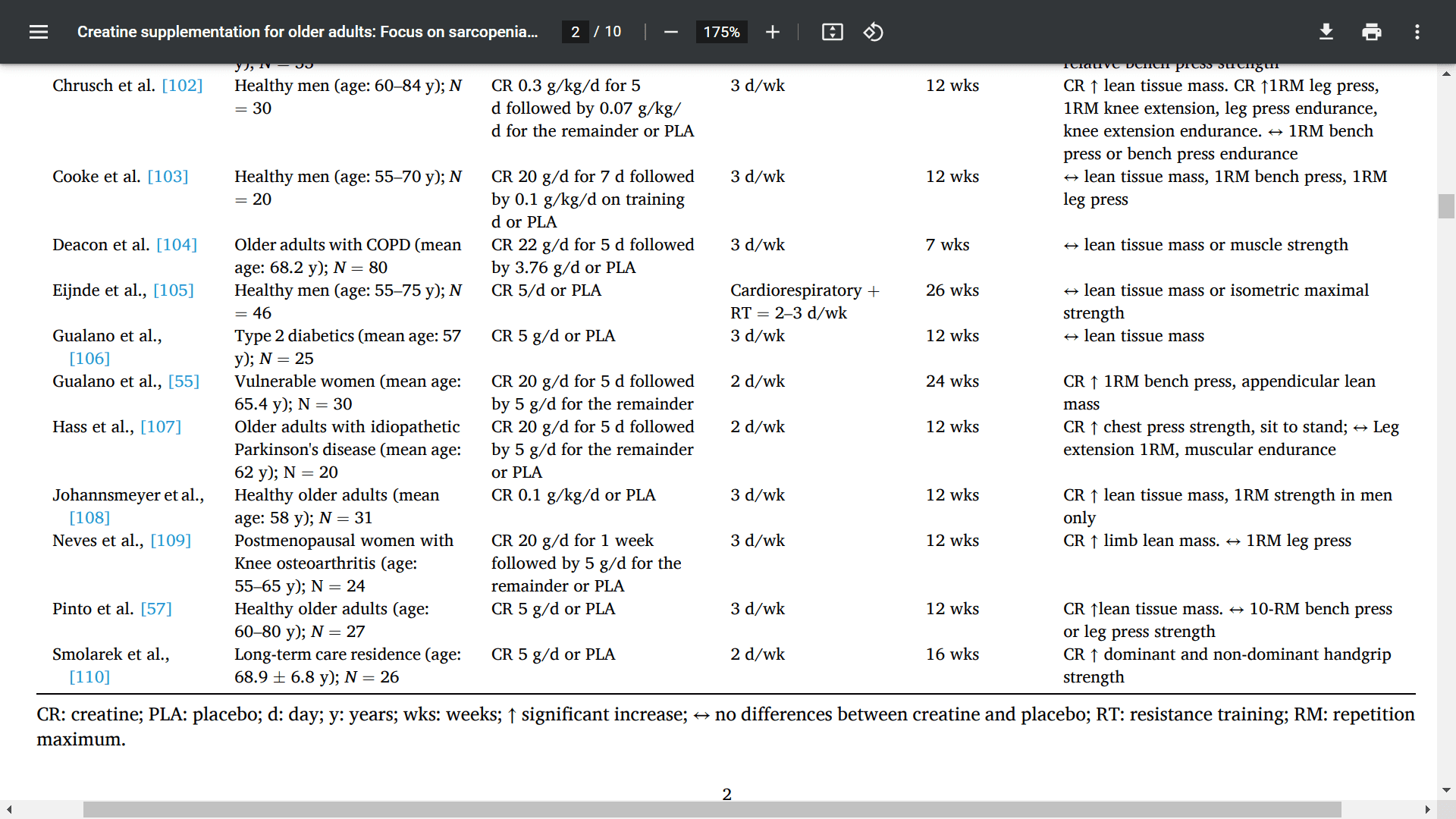 Table 2 Study characteristics and outcomes of research examining the influence of creatine without a resistance training program in older adults. 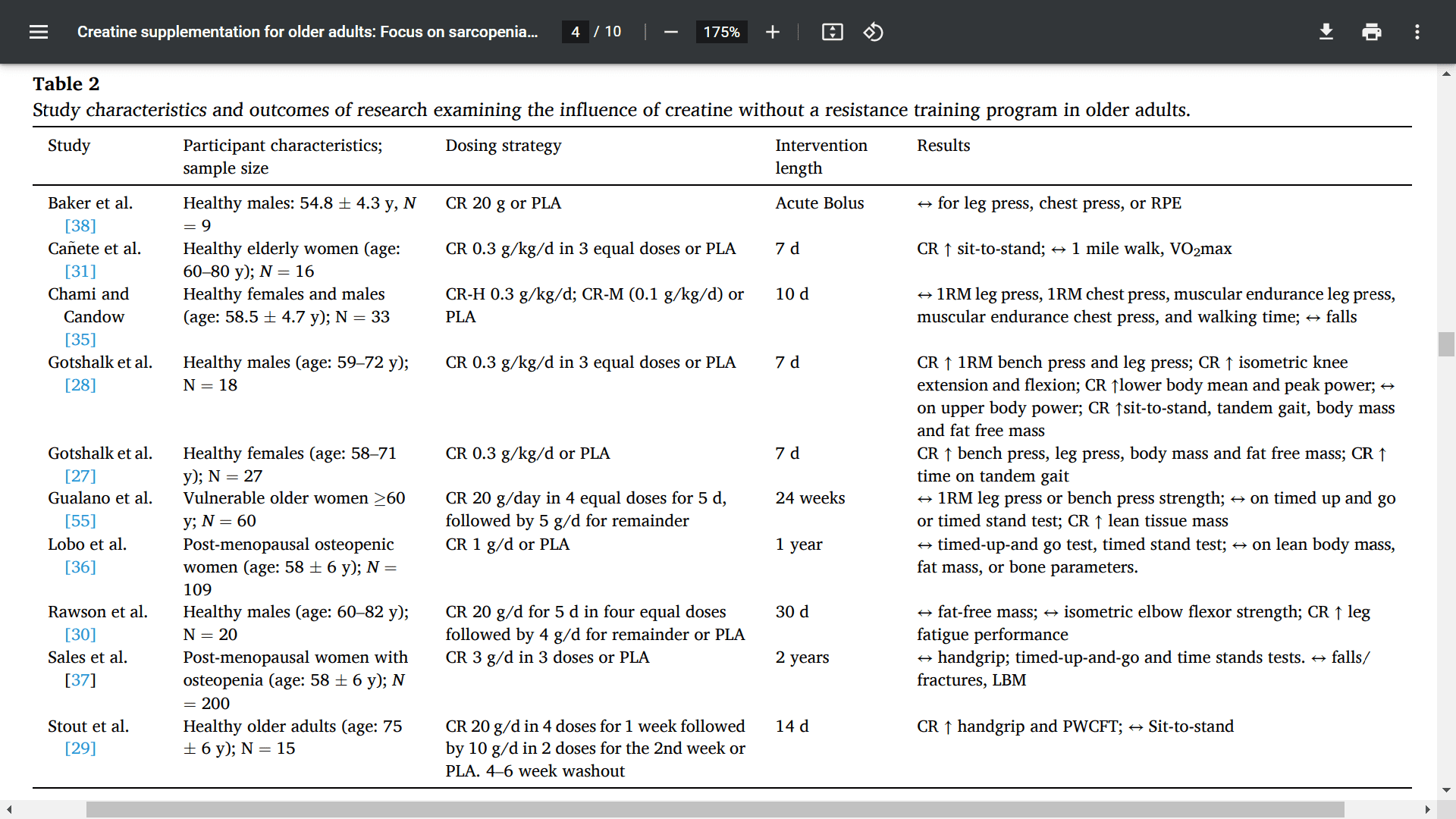 Creatine in Health and Disease

Abstract: Although creatine has been mostly studied as an ergogenic aid for exercise, training, and sport, several health and potential therapeutic benefits have been reported. This is because creatine plays a critical role in cellular metabolism, particularly during metabolically stressed...

Can conditions of skeletal muscle loss be improved by combining exercise with anabolic agents?

Abstract Sarcopenia, cachexia, and atrophy due to inactivity and disease states are characterized by a loss of skeletal muscle mass, often accompanied by reduced levels of anabolic hormones (e.g. testosterone). These conditions are associated with an increase in mortality, hospitalization, and...

Role of androgens and SARMs in cachexia

How to Increase Muscle Mass in Critically Ill Patients

Abstract Purpose of Review Decades of research on nutrition and exercise on athletes and bodybuilders has yielded various strategies to promote anabolism and improve muscle health and growth. We reviewed these interventions in the context of muscle loss in critically ill patients. Recent...

Abstract Skeletal muscle mass losses with age are associated with negative health consequences, including an increased risk of developing metabolic disease and the loss of independence. Athletes adopt numerous nutritional strategies to maximize the benefits of exercise training and enhance...

I need to read up. Current prevailing thoughts around here on the safety of creatine? I know there are renal concerns, but admittedly have to educate myself more.
G

I've used creatine for 15 or 20 years. I have not heard of any legitimate renal concerns. One of the safest compounds there is and is naturally occurring in beef. Any risks are microscopic in comparison to many other compounds like acetaminophen or statins. Will Brink has written extensively on the benefits.
F

Guided_by_Voices said:
I've used creatine for 15 or 20 years. I have not heard of any legitimate renal concerns. One of the safest compounds there is and is naturally occurring in beef. Any risks are microscopic in comparison to many other compounds like acetaminophen or statins. Will Brink has written extensively on the benefits.
Click to expand...

No side effects that you have noticed?
G

It seems to create mild amount of bloat and is well-known to promote water retention, but that is not really a problem. It will raise creatinine but in what I understand to be a benign way. Chris Masterjohn has also written about the many benefits.
Share:
Facebook Twitter Reddit Pinterest Tumblr WhatsApp Email Share Link