Abstract: Erectile dysfunction (ED) is a disorder that affects the quality of life and the sexual relations of more than half of the male population aged over 40 years. The prediction regarding the incidence of ED is devastating as it is expected that this disorder will affect more than 300 million men in the next five years. Several studies have suggested the use of stem cells for the treatment of ED and showed that this type of treatment is promising in terms of damaged tissue repair as well as of clinical efficacy; however, there are several gaps in the knowledge and evidence is lacking. In order to highlight a few of them in this review, we performed research of the literature focusing on currently available clinical studies regarding the clinical efficacy of stem cell administration for the treatment of ED. We reviewed the methods of administration, the cell types used in the performed clinical trials, and the safety and efficiency of such procedures. We conclude that there are rapidly expanding and promising results from the reported clinical studies indicating that stem cells could indeed be a potential treatment for patients with ED although more studies are necessary.

Erectile dysfunction (ED) is a common condition that refers to the inability of a male individual to attain and maintain sufficient penile erection for sexual intercourse [1]. It is classified as organic, psychogenic, or neurogenic [2]. Over the past years, ED has raised increased concern and has been recognized as a public health problem [3]. It mainly affects men aged > 40 years and has a significant impact on their sexual life [4]. Interestingly, the Massachusetts Male Aging Study indicated that approximately 52% of 1290 men aged 40–70 years suffered from ED [5]. Future projections show a prevalence of 322 million men with ED by 2025, indicating an increase of more than 100% compared with the corresponding rates in 1994 (approximately 154 million men with ED) [5]. There are several disorders that are linked to ED such as diabetes mellitus, metabolic syndrome, cardiovascular diseases, Parkinson’s disease, and pelvic nerve injury [6]. The majority of these disorders are associated with endothelial dysfunction, which is linked to the severity of ED as the corpora cavernosa vascular homeostasis is mainly regulated by the vascular endothelium [7].

Other factors that play a significant role in the development of ED are the damage of the nerves that are responsible for the erection, side effects due to drug medication and alterations in hormone levels such as testosterone [8].

Until recently, the treatment of ED has mainly been based on the transient enhancement of penile erection but without a permanent reversal of endothelial dysfunction or restoration of the disturbed penile tissue homeostasis. Current treatment options include phosphodiesterase type-5 inhibitors (PDE5is) such as vardenafil, avanafil, tadalafil, and sildenafil, which are the most widely known and used medications for the treatment of ED. Their mechanism of action is mediated by the Nitric Oxide (NO) cyclic guanosine monophosphate (NO-cGMP) pathway activation. In brief, penile erection requires arterial smooth muscle cells (SMC) relaxation to facilitate blood flow in the penile tissue (i.e., a network of arteries, capillaries, and lacunae surrounded and supported by elastic tissue, collagen, and muscle fibers) in order to produce penile engorgement and rigidity of the penis. The main metabolite inducing SMC relaxation is NO provided by the nonadrenergic noncholinergic postganglionic parasympathetic neurons and the endothelium. NO facilitates the transformation of inactive GTP to active cGMP, which eventually results in Ca++ decrease within the cytosolium, thus enhancing SMC relaxation in the corpus cavernosum causing vasodilation, blood inflow, and erection. PDE5 enzymes metabolize cGMP to an inactive form so PDE5is inhibit the degradation of cGMP and the final event is a more pronounced decrease in Ca++, which facilitates erection [8,9]. Of note, the last ten years of reports have expanded our knowledge by indicating that PDE5is also stimulates bone marrow endothelial progenitor cell function and inhibits the apoptosis of smooth muscle cells [10–14].

Unfortunately, the treatment failure levels with PDE5is are unacceptably high. Among patients using PDE5is, approximately 20% of those who had ED without other comorbidities, and 40% of those with diabetes mellitus or who underwent a prostatectomy remained unresponsive to these treatment procedures [15]. Therefore, additional treatment options for the management of ED are needed and include the use of intracorporeal injections, vacuum erection devices, and penile prosthesis implantation. However, their application is also limited due to the high cost, intolerance to side effects, pain, and unsatisfactory results [8]. Consequently, the need to develop efficient curative treatments for patients with ED turned the scientific interest in the study of stem cell therapy [6]. In this systematic review, we aim to shed light on the gaps in knowledge and evidence regarding the potential use of stem cells for ED treatment and provide an overview of the currently available knowledge and concerns.

A double-blind randomized controlled study is urgently needed for the investigation of the clinical effect of stem cell treatment in ED. Unfortunately, due to its invasive nature, it is not easy to organize. Nevertheless, the results are encouraging so far but questions need to be answered such as: which is the ideal stem cell for the treatment of ED? What is the optimal dose? Should we use expanded cultured cells or SVF from the adipose tissue? Or should we combine expanded cells with PLP to get the best of the two treatments? Most importantly, should we use a patient’s own stem cells, or instead should we use cells from a younger, healthier donor?

Currently, several preclinical and clinical studies have reported preliminary data regarding the safety and potential efficacy of stem cell treatment in ED. Nevertheless, future randomized clinical trials examining their use in an adequate number of humans over a long period of time using different templates of doses and numbers of injections are needed to be performed to obtain sufficient knowledge regarding the ideal therapeutic strategy and elucidate any potential adverse effects. 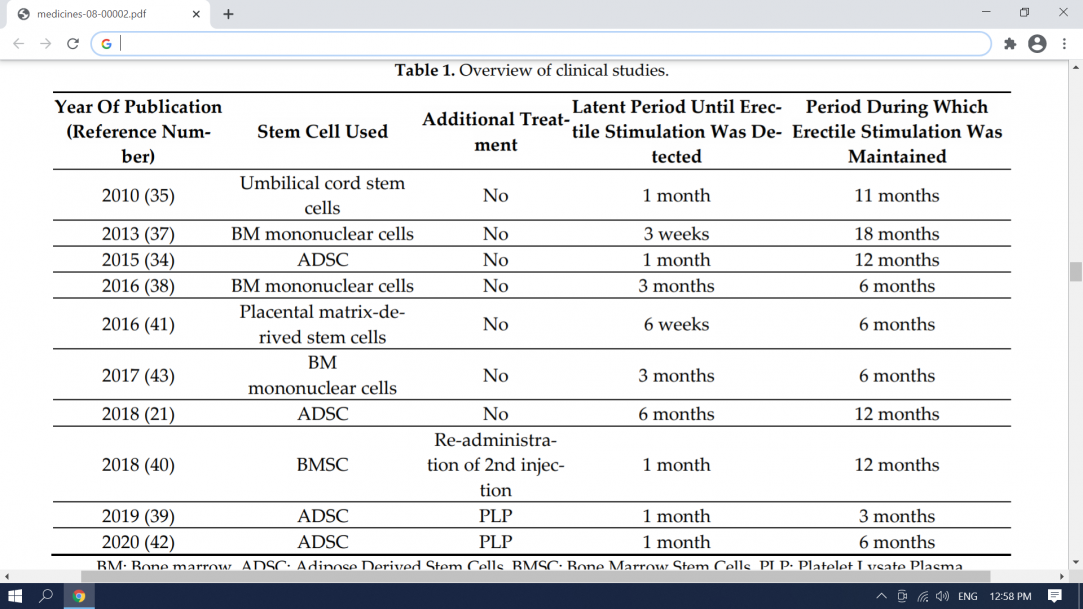 This would be like having a warp drive with no knowledge of astronomical navigation. That is, where are you going to go with it? The interplay between, neurogenic, psychological and physical factors confound any diagnosis. Regeneration of the smooth muscle would be beneficial but is not likely the weak link in the ED chain. The biggest hurdle I think is that the major plumbing plays a large role and it cannot be replaced not even if collateral circulation to the CC could be achieved with stem cells. The valves in veins, if damaged, cannot be repaired or replaced with stem cells. But I'm all in for basic research. I think I will have a full head of hair with cloned DPCs before ED is cured with stem cells. So, I'll just "limp" along until then.
Last edited: Jan 11, 2021

Back in July of 2020 I had a procedure that is called CaverStem. I was having terrible ED issues and had been for several years. I have been on TRT longer than I can remember. I was on Androgel for many years until my doctor told me it just wasn't working for me anymore based on my labs. I have been on injectible T for a couple years now. The difference from the gel was quite noticeable. My ED got a little better but not what it should be. He put me on Clomid to keep my testicles from atrophying and Anastrozole to keep Estrogen at bay. Things got even better but I was still having ED issues.
I always kept an eye open for options then I heard about CaverStem. It cost $4,000 and is NOT covered by insurance. I had nothing to lose so I did it. They use a cannula device and extract bone marrow from your hip and straight away inject it into the Corpus Cavernosa of your penis. You can't use your penis for 4 days afterwards. My doctor also put me on 5 mil of Cialis at bedtime every day.
They say that the stem cells in your bone marrow repair any damage in your penis and that the three month mark is magic time. My experience was the first month and a half were great. Then in calmed down for a month and a half or so. A little after the three month mark my ED is a lot better than it was but is still not what I'd like it to be. I am should disclose that I will be 60 this March.
So while I am happy I did the CaverStem treatment I am now eyeing something called Gaines Wave Treatment which I understand is an ultrasound treatment which apparently stimulates stem cells in your body to repair any damage in the penis. As I said, my ED is better but I still sometimes have to take one of any of the boner pills to have sex but not every time. So while my ED is better than it was I still want it to be better than it is.
Has anyone else had any kind of ED treatment before?
D

While I haven't tried it personally, I think the Low Intensity Shockwave Treatment is promising and seemingly harmless. Some advancement in research as to the frequency, pulse rate and generation of the energy has evolved since the early Gainswave. Check Urogold 100. I plan on giving it a go when the virus situation lets up.
F

Thanks for your response DorianGray. I'm am going to do the Low Intensity Shockwave Treatment as soon as I can afford it. I was turned on to a clinic that does this by a doctor I had an ED conversation with. It's called the American Male Clinic. I believe there are 4 locations, two in CA, one in TX and one in TN so far as I can tell. There are other Urologists that do this particular treatment and I found one closer to home.
The doctor that I had this ED convo with told me the cost of the treatment and it's more than I can afford on a regular basis for the number of treatments they would want to do. He told me they will sell me a machine so I can do the treatments myself at home. I searched online and for the price of one treatment you can buy a machine online.
What they do on your first visit is induce an erection with TriMix and they do an ultrasound (Doppler Test) to see if your ED is caused by damage in the penis. Then they will recommend how many treatments and a course of action. I will pay for one Shockwave treatment so I can learn how to do it and then I will buy my own machine to save money.
Hopefully this will lead to even better erections!

Please keep this tread about stem cells. For shockwave, use this one:

Has anyone heard or used this therapy? I am skeptical. What is GAINSWave and How Does it Treat Erectile Dysfunction? | GAINSWave Research I think Dr Gains is Gene's doctor.