WHAT THIS PAPER ADDS This paper provides a pre-operative workup and treatment scheme for cavernovenous leakage, a frequent, albeit ignored, disease responsible for erectile dysfunction (ED) resistant to oral treatment (i.e. 30% of patients eligible for ED medications). Arterial and venous penis pharmacologically challenged duplex sonography and cavernoscanner, followed by an intervention combining endovascular embolization and open surgery allow 82% of patients to perform intercourse with penetration, including those with diabetes. The correlations between penile hemodynamics and erectile function are documented here for the first time.


Objective: Thirty per cent of cases of erectile dysfunction (ED)/male impotence are resistant to oral treatment. Half of these cases are due to blood drainage from the corpora cavernosa occurring too soon, due to cavernovenous leakage (CVL). The aim of this study was to report on an innovative treatment scheme combining pre- and post-operative haemodynamic assessment, venous embolisation, and open surgery for drug-resistant ED caused by CVL.

Results: Mean patient age was 43.9 ± 12.0 years (range 20-67). Forty-nine per cent of patients had primary ED. Patients with diabetes, a smoking habit, hypercholesterolaemia, and hypertension were 18%, 11%, 9%, and 4%, respectively. Three months post-operatively, PC-EHS increased from 2.0 ± 0.7 to 3.1 ± 0.74 (p < .001), with an EHS of 3 being the threshold allowing for penetration. Deep dorsal vein velocity, a haemodynamic marker of CVL, decreased from 14.2 ± 13.0 to 0.9 ± 3.5 cm/s (p < .001). After a 14.0 ± 10.7 month follows up, the primary success rate (clinical EHS ≥ 3, possible sexual intercourse with penetration, no vascular re-operation, no penile prosthesis implant) was 73.3%. Four patients (9%) underwent successful re-operation for persistent ED and CVL. Accordingly, compared with a possible penetration rate of 8.9% before surgery, 37 patients (secondary success rate: 82.2%) were able to achieve sexual intercourse with penetration. Type of ED (primary vs. secondary) and diabetes had no influence on the results. Thirty-two per cent of patients with the secondary success achieved penetration with no medication.

Conclusions: After a 14 month follow up, pre-operative workup, embolisation, and open surgery during the same procedure allowed patients with ED resistant to oral medications to achieve intercourse with penetration.

Erectile dysfunction (ED) caused by cavernovenous leakage (CVL) is a vascular disease of the penis in which blood fails to accumulate in the corpora cavernosa (CC) because of the abrupt drainage of blood from the penis due to an abnormal venous network.1,2 As a consequence, pressure in the CC does not rise and any erection is insufficient to achieve intromission during sexual intercourse.

Papaverine intracavernosal injections (ICIs)3 and oral medications, introduced 21 years ago,4 have revolutionised the medical treatment of ED. However, oral treatments are ineffective in 30% of patients with ED;5,6 in half of these cases CVL is responsible for the failure to retain blood in the penis, despite a drug-induced increase in inflow.7,8 Up to 86% of patients resistant to papaverine or prostaglandin E1 ICIs have CVL.9,10 CVL is responsible for half of the cases of severe ED, which affects 1%e4% of men under 25 years of age.11,12 Despite its high prevalence, CVL usually remains hidden. Consequently, patients (potentially young ones) with drug-resistant ED who refuse (if proposed) penile implants are unable to achieve sexual intercourse.

ICIs to induce erections have promoted the concept of somatic causes of ED,13 and have provided pharmacological tools to unravel the causes of ED. A combination of pharmacologically challenged (PC) duplex sonography (PCPDS),14e16 PC cavernoscanner (PC-CCT),17,18 and Erection Hardness Score (EHS) provide an accurate diagnosis of CVL and assessment of treatment efficacy.

Surgery for CVL has been nearly completely abandoned, except in notable exceptions.19e22 Most reports suggest that surgical or embolisation procedures alone are ineffective for reasons ranging from flawed patient selection,23 poor follow up, and early recurrent post-operative CVL.23e 26 It was thought that improved haemodynamic and morphological disease characterisation, together with an innovative combination of open and endovascular techniques during the same procedure, may result in a more efficient blockade of venous outflow.

A series of patients with CVL, all resistant to oral treatment, assessed before and after the intervention, who were operated on with a combination of open and endovascular techniques, is presented.

This paper has reported on a new treatment scheme for patients with ED resistant to medical treatment, consisting of a rigorous pre- and post-operative haemodynamic assessment; leaking vein visualisation with PC-CCT; and an innovative association between embolisation and open surgery during the same procedure. The main result is improved erectile function, allowing 82% of patients to achieve sexual intercourse with penetration after a 14 month follow up.

Because of the vascular nature of erectile tissue,27,30e32 standardised PC-PDS discriminates vascular from psychological and neurological causes of ED: patients responding with weak erections to pharmacological stimulation are likely to suffer from vascular disease,27 whereas those with a strong erectile response can be considered to have a functional penile vascular system. PC-PDS provides quantitative information on the penis’s ability to retain blood in the CCs, the function compromised in CVL. In order to avoid false-positive diagnoses, a diagnosis of CVL was retained in patients with no or minor arterial disease, after sufficient pharmacological stimulation,10,27 and direct penis haemodynamic assessment of leaking veins.27 PC-CCT and three-dimensional reconstructions allow for a personalised operative strategy.17,18

Evidence is provided that the association between embolisation and open surgery efficiently addresses CVL responsible for ED resistant to medical treatment. CVL can be diagnosed at all ages of sexual life, with a prevalence of 1%-2% in those <25 years and of 10%-20% after 60 years of age. State of the art pre-operative patient selection is critical. Although a longer follow up is awaited, the youngest of the patients in the present series who had never experienced sexual intercourse now have access to a full sex life. These results justify PC-PDS detection of CVL in drug-resistant EDs at all ages, including in diabetic patients. This research is now aimed at understanding the mechanisms of surgery failures.

Venous Leakage: The Cause of Your ED?

By Lee Meyers “Venous leakage.” Sounds nasty, doesn’t it? Kind of like a hemorrhage or something, eh? Well, most guys would probably rather have a little hemorrhaging than venous leakage, because it leads to weak and/or rapidly disappearing erections. Venous leakage describes the condition... 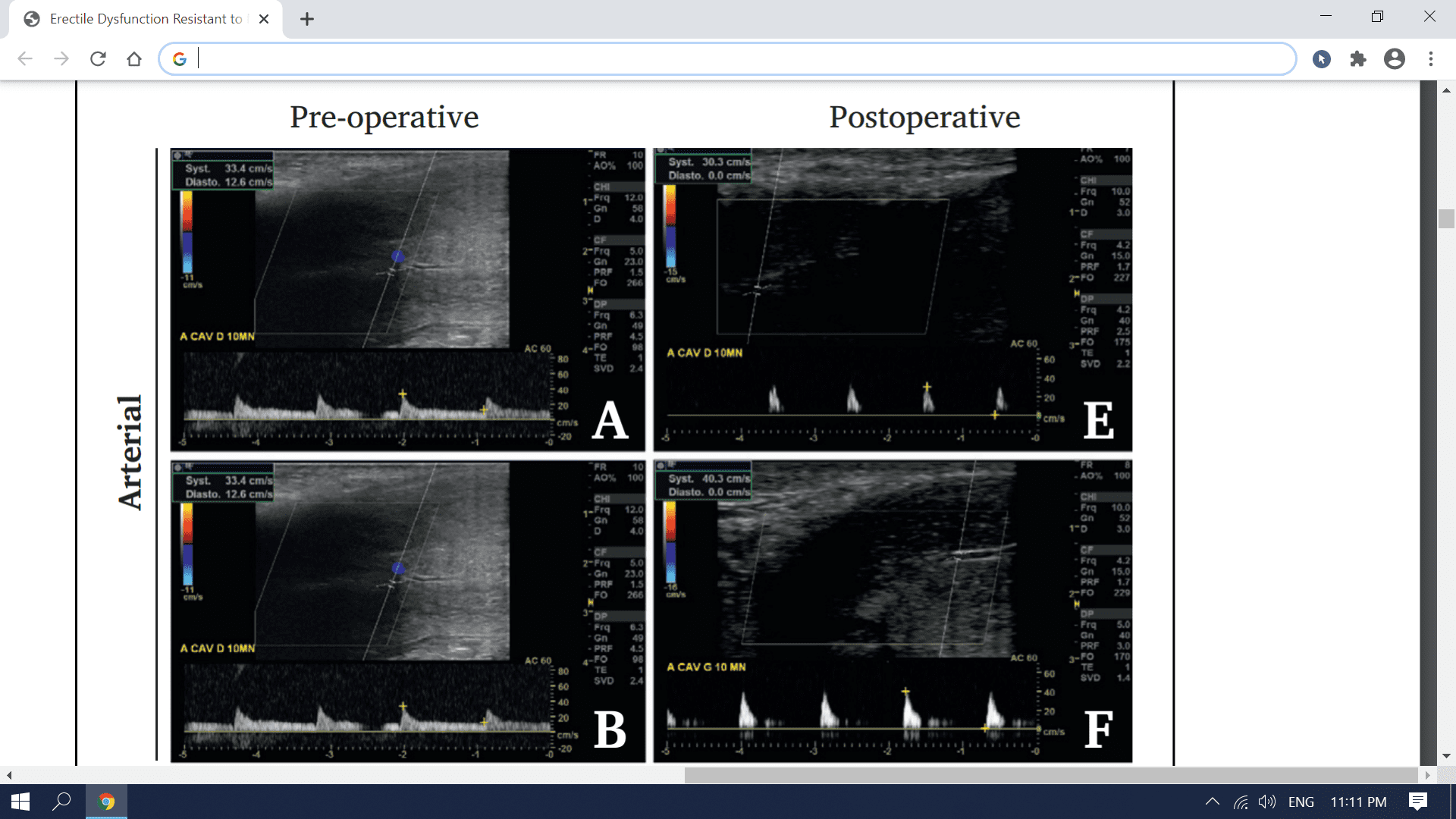 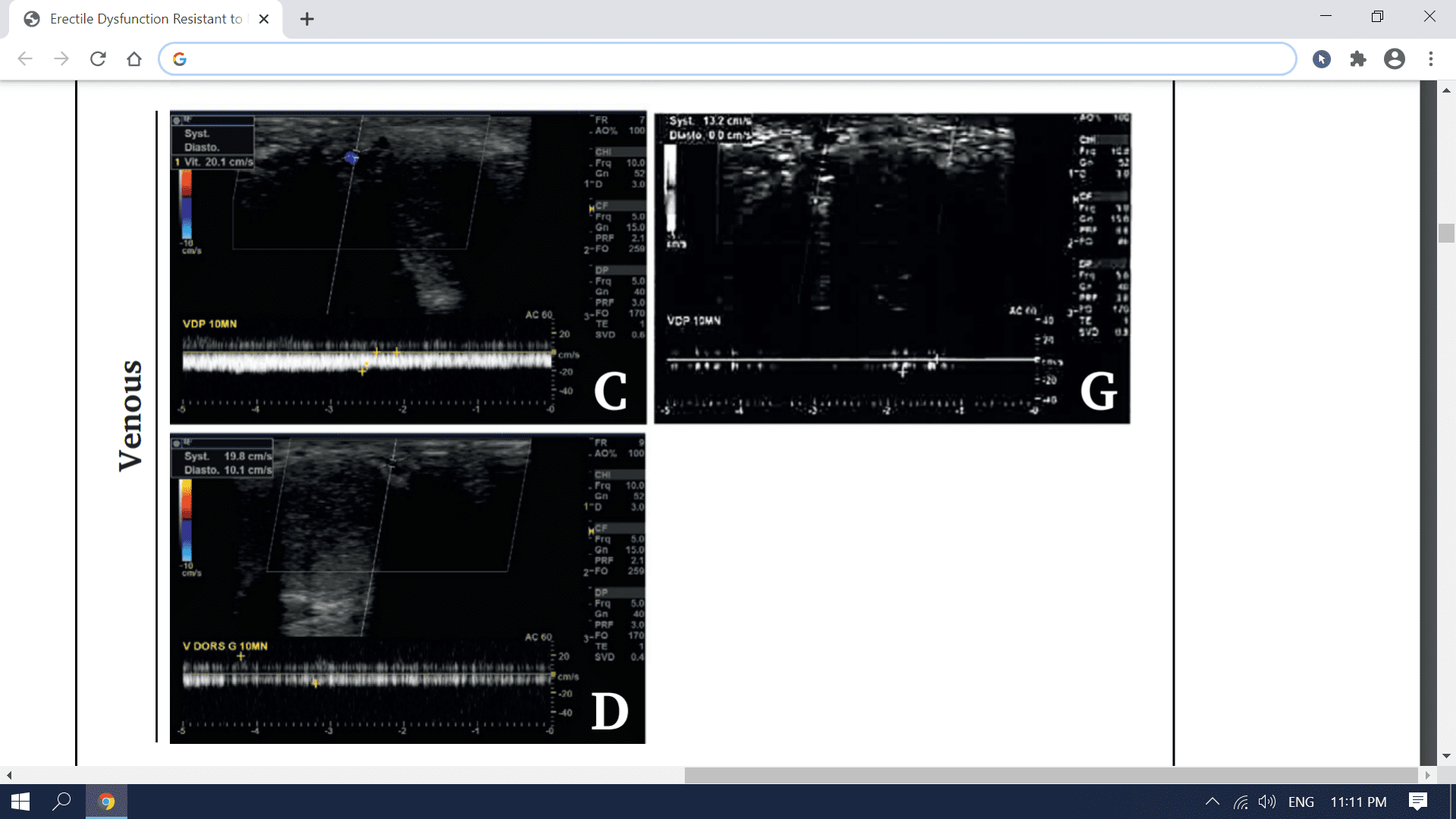 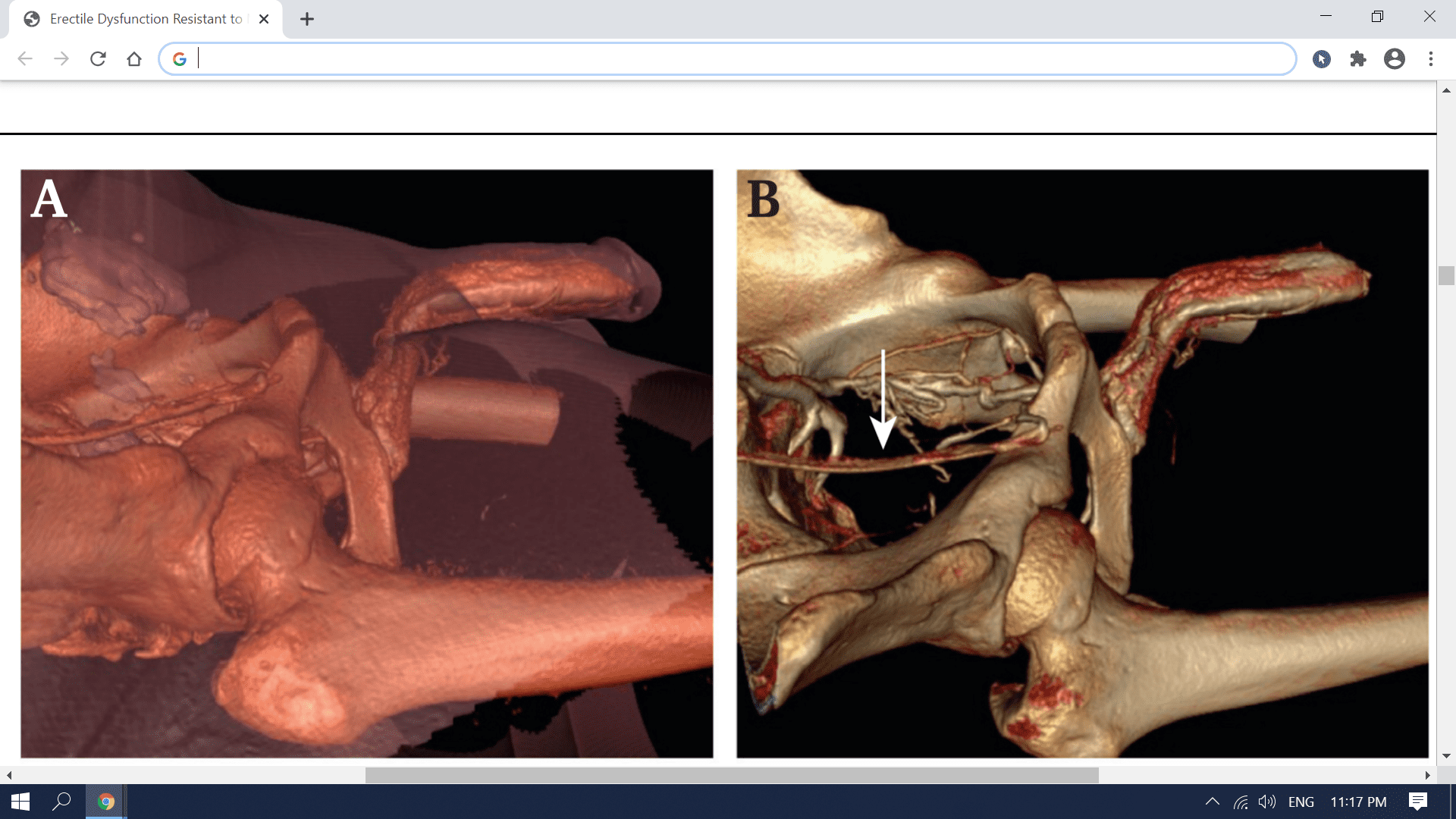 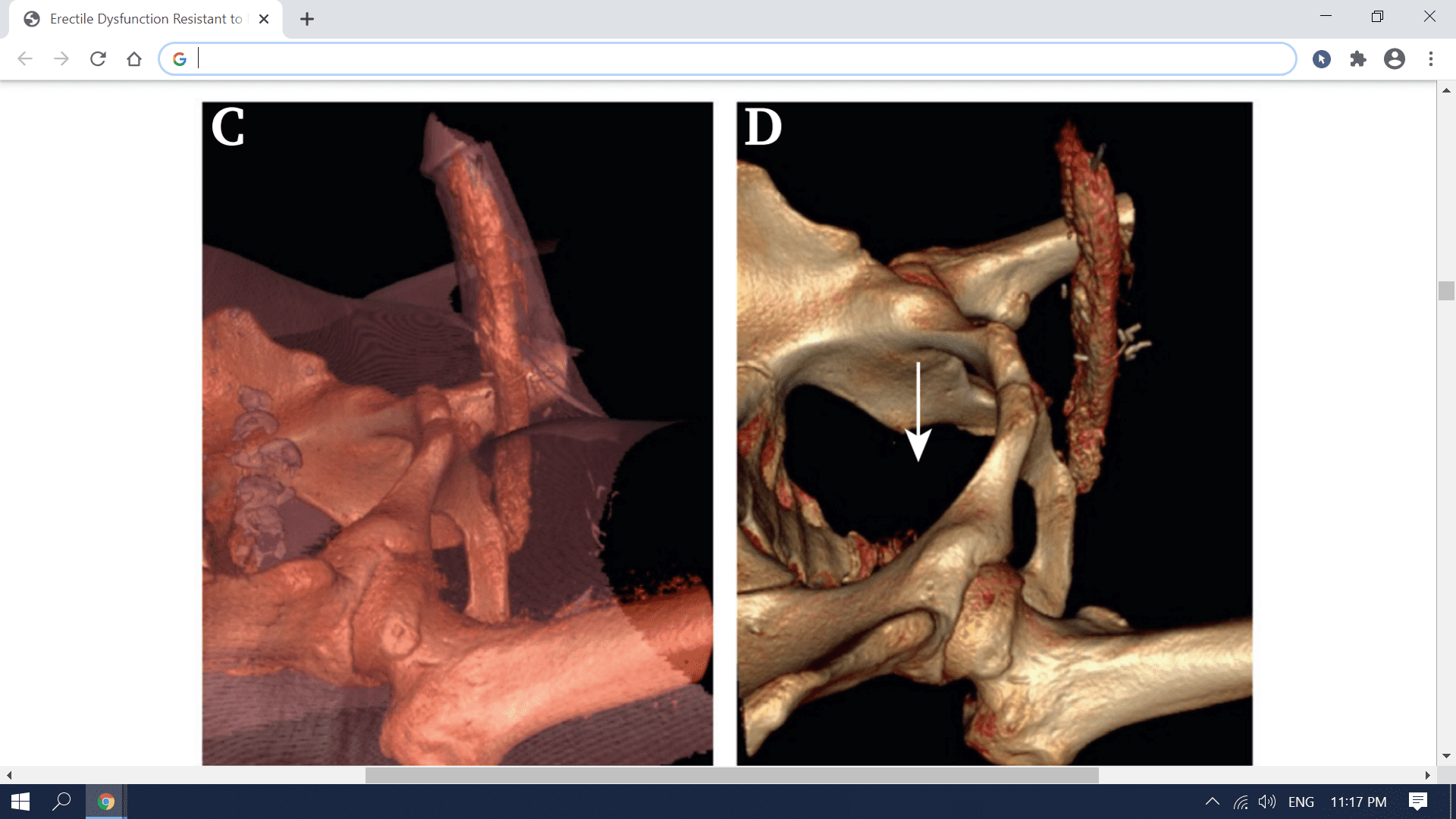 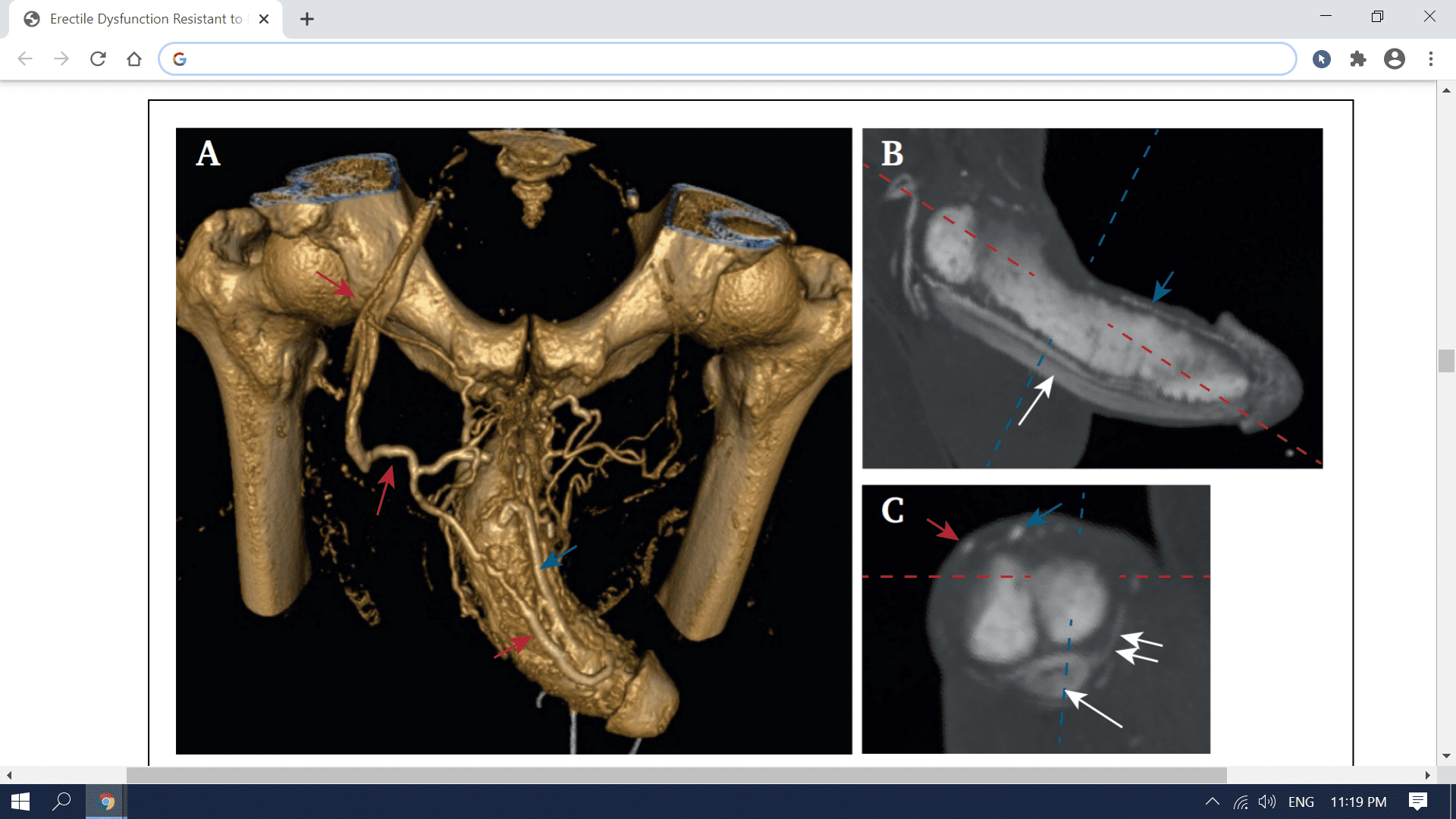 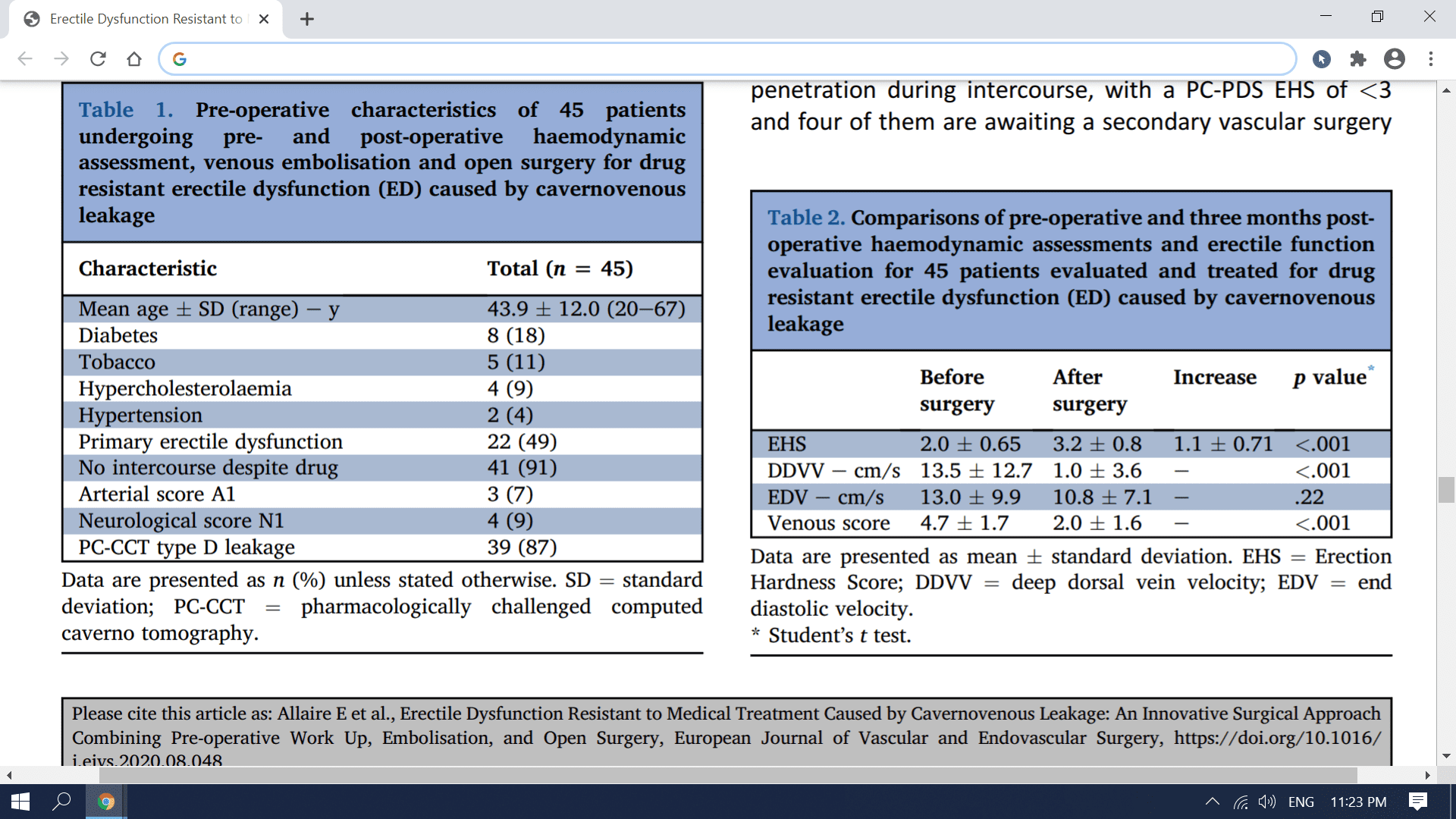 Table 3. Erectile function at the end of follow up in 45 patients undergoing pre- and post-operative hemodynamic assessment, venous embolization, and open surgery for drug-resistant erectile dysfunction caused by cavernovenous leakage 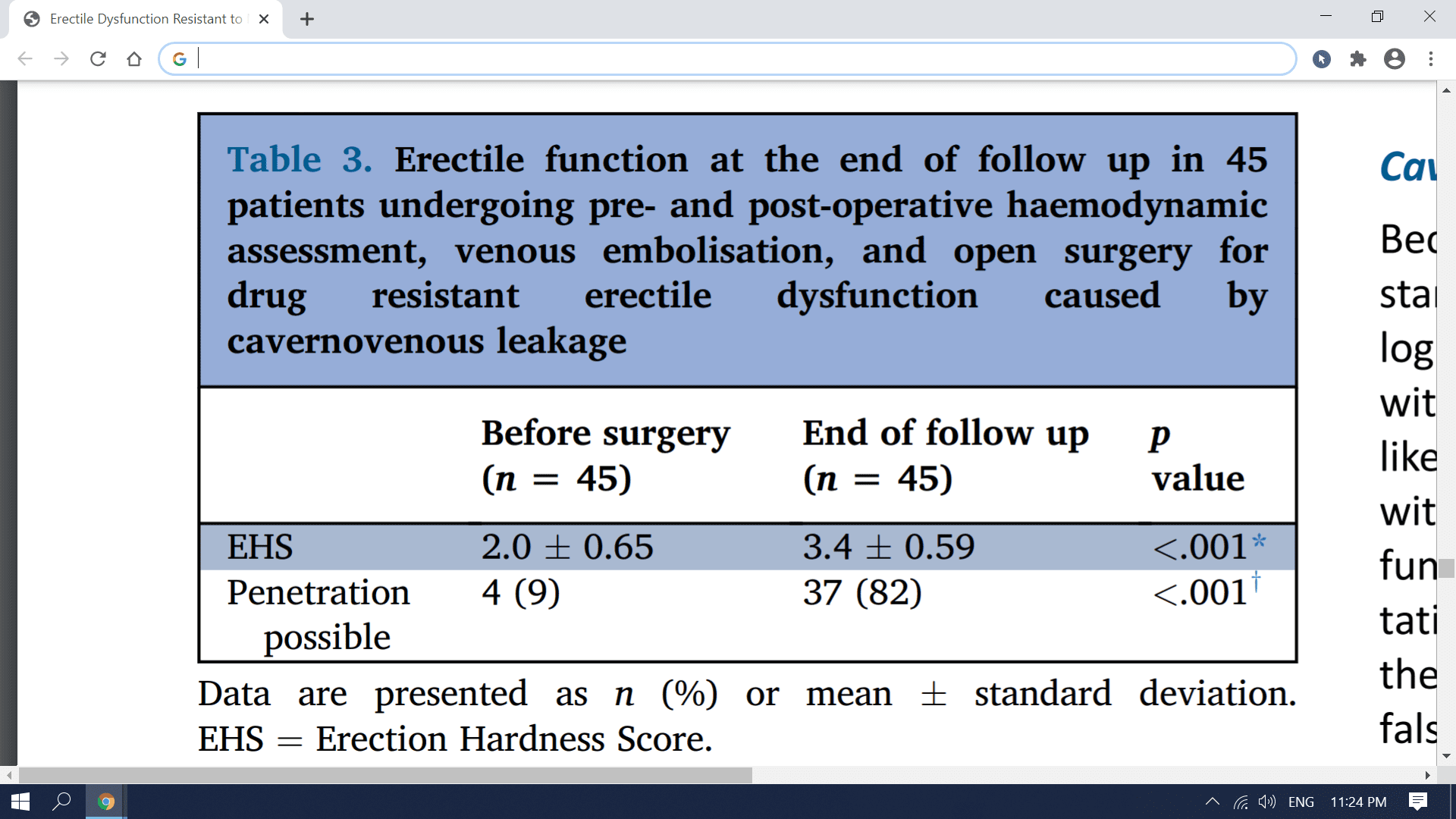 Excellent article. I imagine it would be difficult and expensive to get a work up with those diagnostics let alone any comparable treatment.

Wow. I have never seen this type of detail
D

Nelson Vergel said:
Wow. I have never seen this type of detail
Click to expand...

Indeed, the 3D CTs now are a vast improvement over the ones we used to get a few years ago.

There is another correlation I wonder if it might be relevant. Research on the topic advises physicians to be concerned about ED being an early warning sign of underlying cardiovascular disease. I wonder if it might also be associated with venous reflux disease in lower extremities?