Although classically known as an endocrine signal produced by the ovary, 17β-estradiol (E2) is also a neurosteroid produced in neurons and astrocytes in the brain of many different species. In this review, we provide a comprehensive overview of the localization, regulation, sex differences, and physiological/pathological roles of brain-derived E2 (BDE2). Much of what we know regarding the functional roles of BDE2 has come from studies using specific inhibitors of the E2 synthesis enzyme, aromatase, as well as the recent development of conditional forebrain neuron-specific and astrocyte-specific aromatase knockout mouse models. The evidence from these studies supports a critical role for neuron-derived E2 (NDE2) in the regulation of synaptic plasticity, memory, socio-sexual behavior, sexual differentiation, reproduction, injury-induced reactive gliosis, and neuroprotection. Furthermore, we review evidence that astrocyte-derived E2 (ADE2) is induced following brain injury/ischemia, and plays a key role in reactive gliosis, neuroprotection, and cognitive preservation. Finally, we conclude by discussing the key controversies and challenges in this area, as well as potential future directions for the field.

Aromatase is a cytochrome P450 enzyme that drives the conversion of androgen precursors into estrogens (Fig. 1) (Blakemore and Naftolin, 2016; Simpson et al., 2002). The aromatase-driven catalysis process involves hydroxylation of androgen precursors using three molecules each of NADPH and oxygen to produce one molecule of estrogen (Ryan, 1959). Aromatase is encoded by a single gene, CYP19, which is located on the 21.2 regions of chromosome 15 in humans (Simpson et al., 2002). This gene is 123 kb in length and is expressed in many tissues, including the gonads, bone, breast, adipose, vascular tissue, skin, placenta, and brain (Stocco, 2012). Tissue-specific transcripts of aromatase are produced from the alternative use of several first exons that are promoter-specific (Fig. 2) (Bulun et al., 2004; Simpson et al., 1993). Splicing of the untranslated first exons into the coding exons 2 through 10 produces multiple different aromatase transcripts; however, all of the transcripts code for the same protein. Exon 1.f has classically been considered to be the brain-specific variant. However, ovarian-specific exon PII and adipose-specific exons 1.3 and 1.4 are also expressed in the brain of rodents and humans (Prange-Kiel et al., 2016; Yague et al., 2006). It should be mentioned that teleost fish are unique in that they have two aromatase isoforms, CYP19a which encodes aromatase A, and CYP19b, which encodes aromatase B (Tchoudakova and Callard, 1998). CYP19a is expressed in the gonads, while CYP19b is expressed in both the brain and gonads. Although these two genes are structurally different, they have similar catalytic activities and over 20 different regulatory sites in the promoter, including response elements for sex steroid receptors, and several transcription factors that regulate neurogenesis (Piferrer and Blazquez, 2005).

Estrogens, the product of aromatase activation, are steroid hormones that can act upon estrogen receptors in tissues throughout the body and brain. The most potent and most studied estrogen is 17β-estradiol (E2), while the other estrogens, estrone (E1) and estriol (E3), are considered weak estrogens. E2 has been implicated in the regulation of many diverse physiological and pathological processes, including reproduction, sexual differentiation, and behavior, cancer biology, bone physiology, synaptic plasticity, cognitive function, anti-inflammatory actions, and neuroprotection (Azcoitia et al., 2018; Boon et al., 2010; Brann et al., 2007; Brocca and Garcia-Segura, 2019; Cortez et al., 2010; Dhandapani and Brann, 2003; Emmanuelle et al., 2021; Khan et al., 2013; Kramar et al., 2013; Saldanha, 2020; Vegeto et al., 2008). While the role of gonadal-derived E2 has been studied extensively, the roles and functions of brain-derived E2 (BDE2) have received less attention and have only recently begun to be fully appreciated. Hence, this review will focus on the localization, regulation, and functions of BDE2 in the brain. Much of the work in this area has been conducted in rodents and the songbird. However, where available, we will present and discuss findings in other species including humans and non-human primates. Much of what we know about the roles and functions of BDE2 in the brain has come from studies using pharmacological aromatase inhibitors (see Fig. 3). However, since both neurons and astrocytes can produce E2, using such a cell non-specific pharmacological approach provides challenges in determining the specific role of neuron-derived E2 (NDE2) versus astrocyte-derived E2 (ADE2) in the brain. Whole-body global aromatase knockout mice support a role for E2 in anti-inflammation, synaptic plasticity and cognition, and neuroprotection from neurodegenerative disorders (Simpson et al., 2002). However, these studies are poorly suited to distinguish the role and specific contributions of brain-derived versus gonadal-derived aromatase/E2 to these effects. Recent work by our group (Lu et al., 2019, 2020; Wang et al., 2020) using brain cell-specific aromatase knockout animal models has helped address this issue and give important insights into the respective roles and functions of NDE2 versus ADE2 in the brain in both physiological and pathological states. We will review this emerging work, as well as discuss existing controversies, and potential future directions for the advancement of knowledge in this important area.


4. Role of brain aromatase and BDE2 in sexual differentiation, reproduction, and socio-sexual behavior
The above studies demonstrated aromatase localization and BDE2 production in many brain regions in multiple species, and showed regulation occurs by multiple processes and factors, often in a tissue- or cell-specific manner. In the following sections, we will review and discuss the evidence supporting multiple important functional roles implicated for BDE2 in the brain.


7. Future directions and conclusions
Despite the remarkable progress described above in elucidating BDE2 functions in the brain, there remain many unanswered questions that require further studies. Below, we have summarized key questions and future directions that could help advance this important research area and provide clarity to areas where controversy currently exists.


In conclusion, the findings described in this review provide substantial evidence of aromatase expression and local E2 production in many different brain areas of almost all species studied to date. E2 is produced in neurons basally, while production in astrocytes is induced by stress, brain injury, or ischemia. A strength of this body of work is that many different techniques were used in studying the localization of aromatase and E2 production in the brain, and many different approaches were used to confirm the roles of BDE2 in the brain, including aromatase inhibitor and knockdown studies, as well as global aromatase and brain cell-specific aromatase knockout animal models. A role for NDE2 is implicated in a diverse spectrum of functions in the brain, including regulation of sexual differentiation, reproduction, sociosexual behavior, synaptic plasticity, LTP, memory and cognition, auditory processing, injury-induced reactive gliosis and astrocyte phenotype, neuroprotection, and anti-inflammatory effects. Following its induction after brain injury or ischemia, ADE2 has been implicated in the regulation of reactive gliosis, astrocyte phenotype, neuroprotection, cognitive preservation, and anti-inflammatory effects. Collectively, these findings demonstrate a critical role for BDE2 in many different brain functions in both physiological and pathological conditions.

Fig. 1. Simplified Biosynthetic Pathway for Estrogens. Estrogen synthesis begins with the conversion of cholesterol to pregnenolone in mitochondria. Through a series of steps, pregnenolone is converted into androstenedione, which is converted into testosterone and estrone (E1). Testosterone is then converted into 17β-estradiol (E2) through the action of aromatase (CYP19A). As also shown, CYP19A can be inhibited by various aromatase inhibitors for research purposes and for therapies. Chemical structures were generated from the ChemSpider webpage (http://www.chems pider.com) 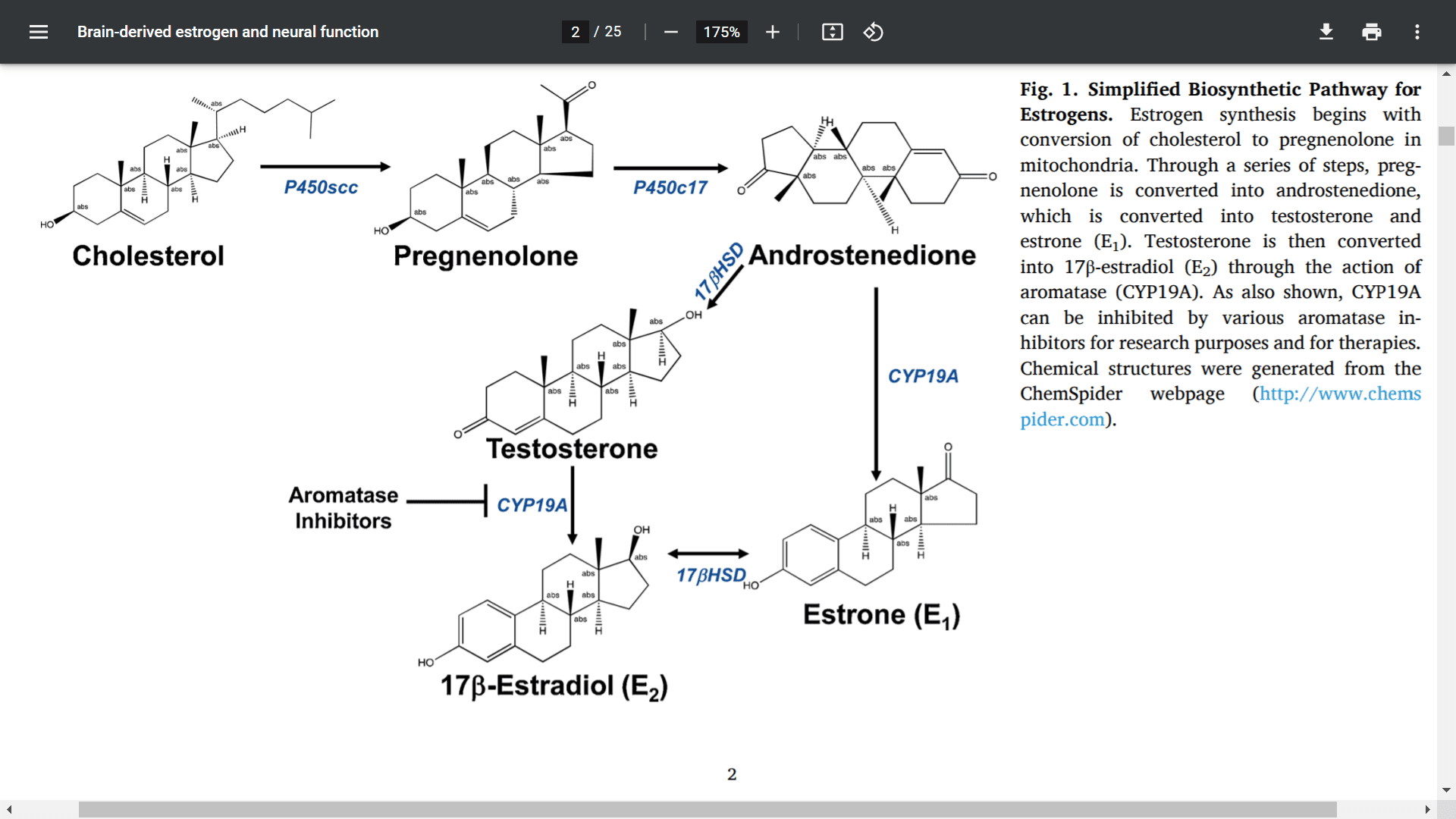 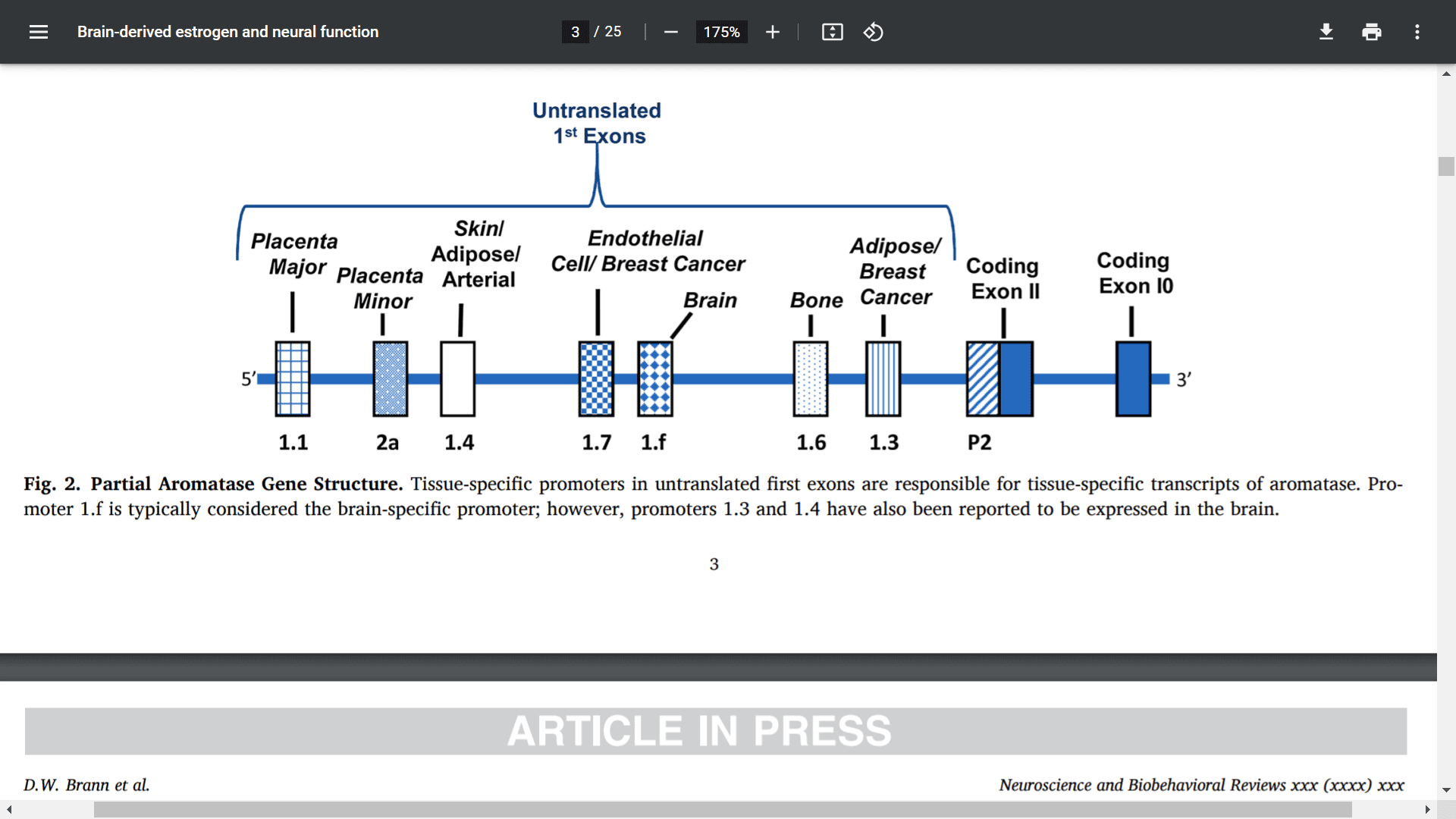 Fig. 3. Primary aromatase inhibitors are used to inhibit aromatase activity in the brain in animals and humans. Chemical structures were generated from the ChemSpider webpage (ChemSpider | Search and share chemistry). 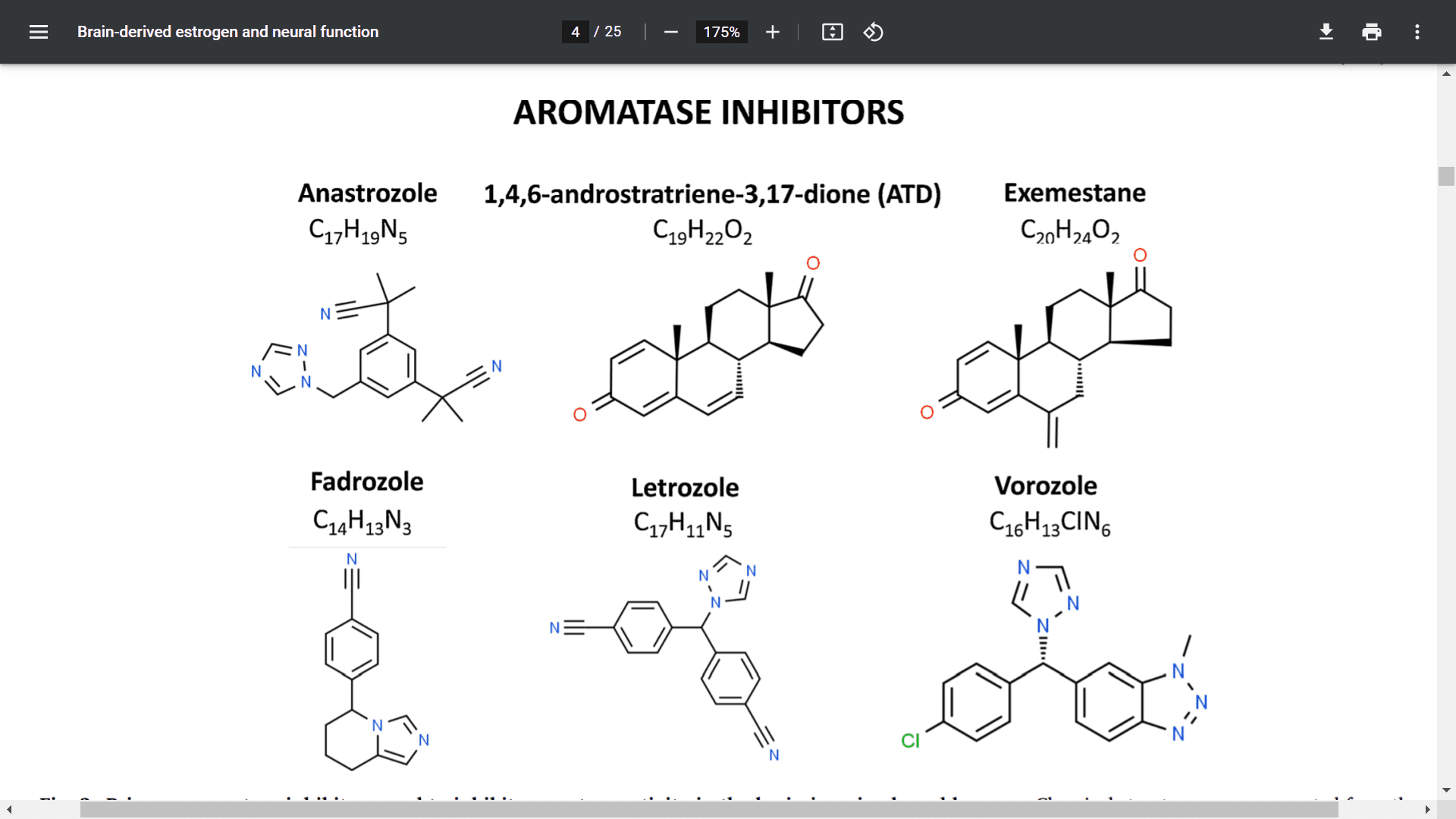 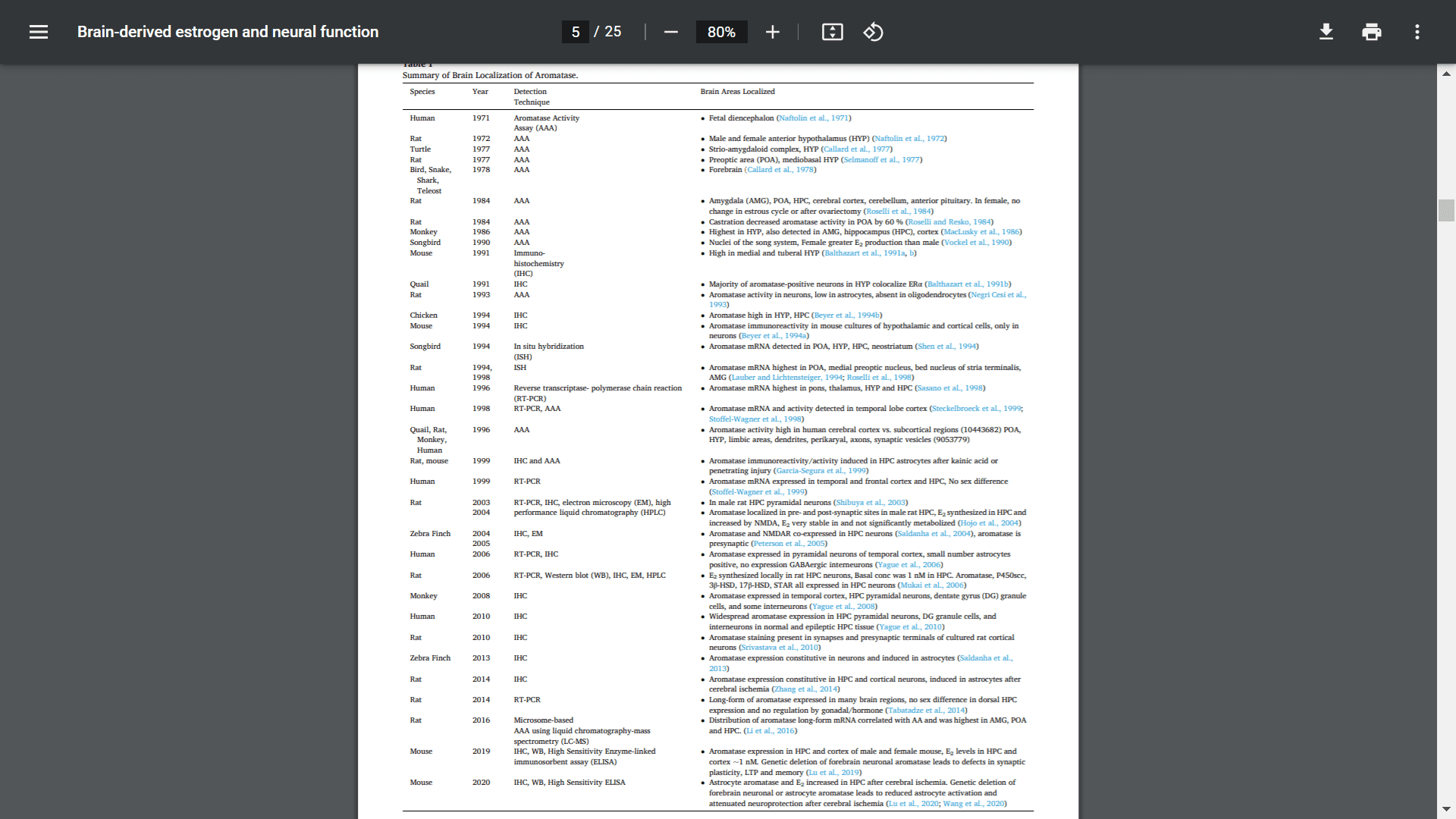 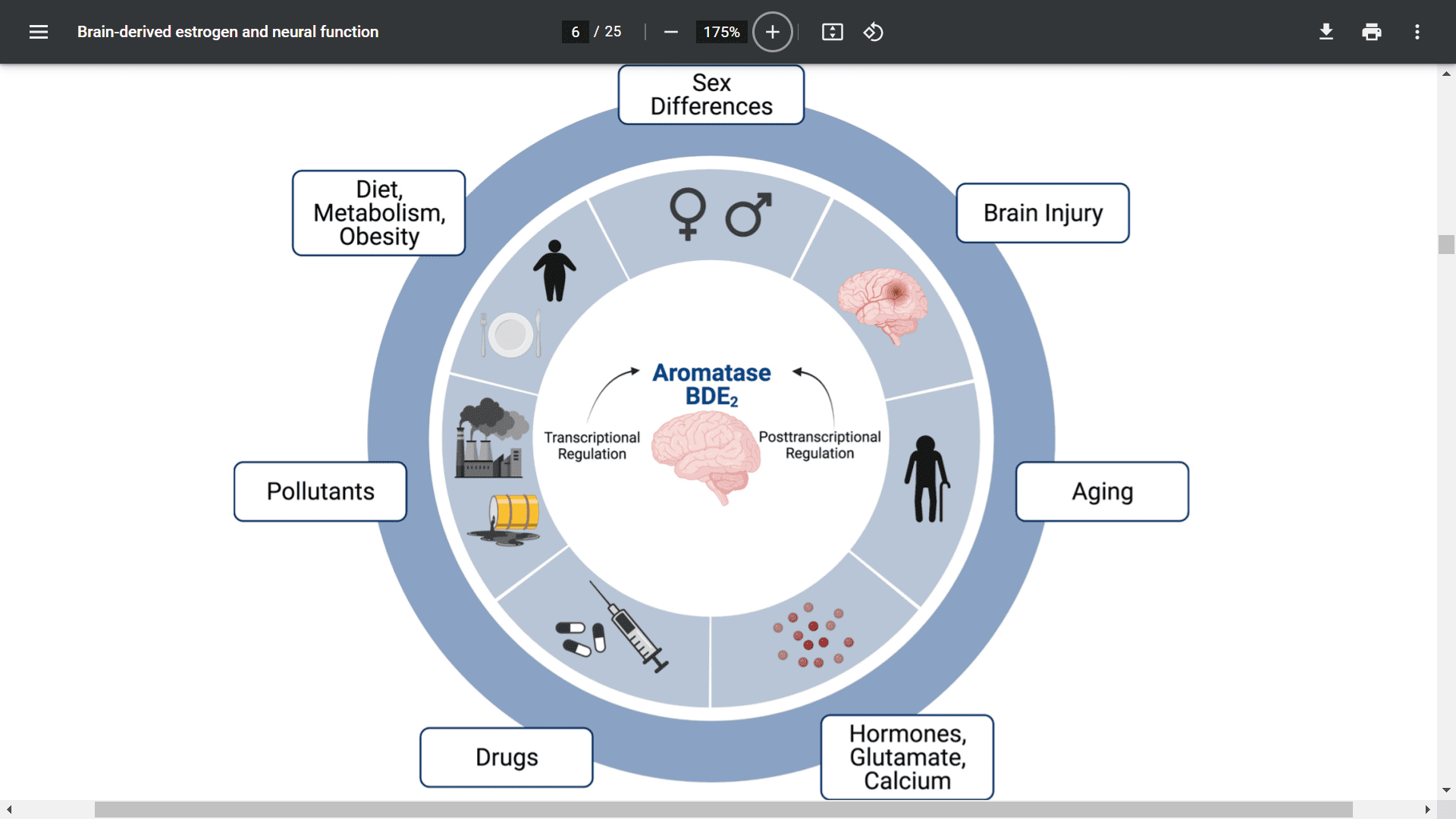 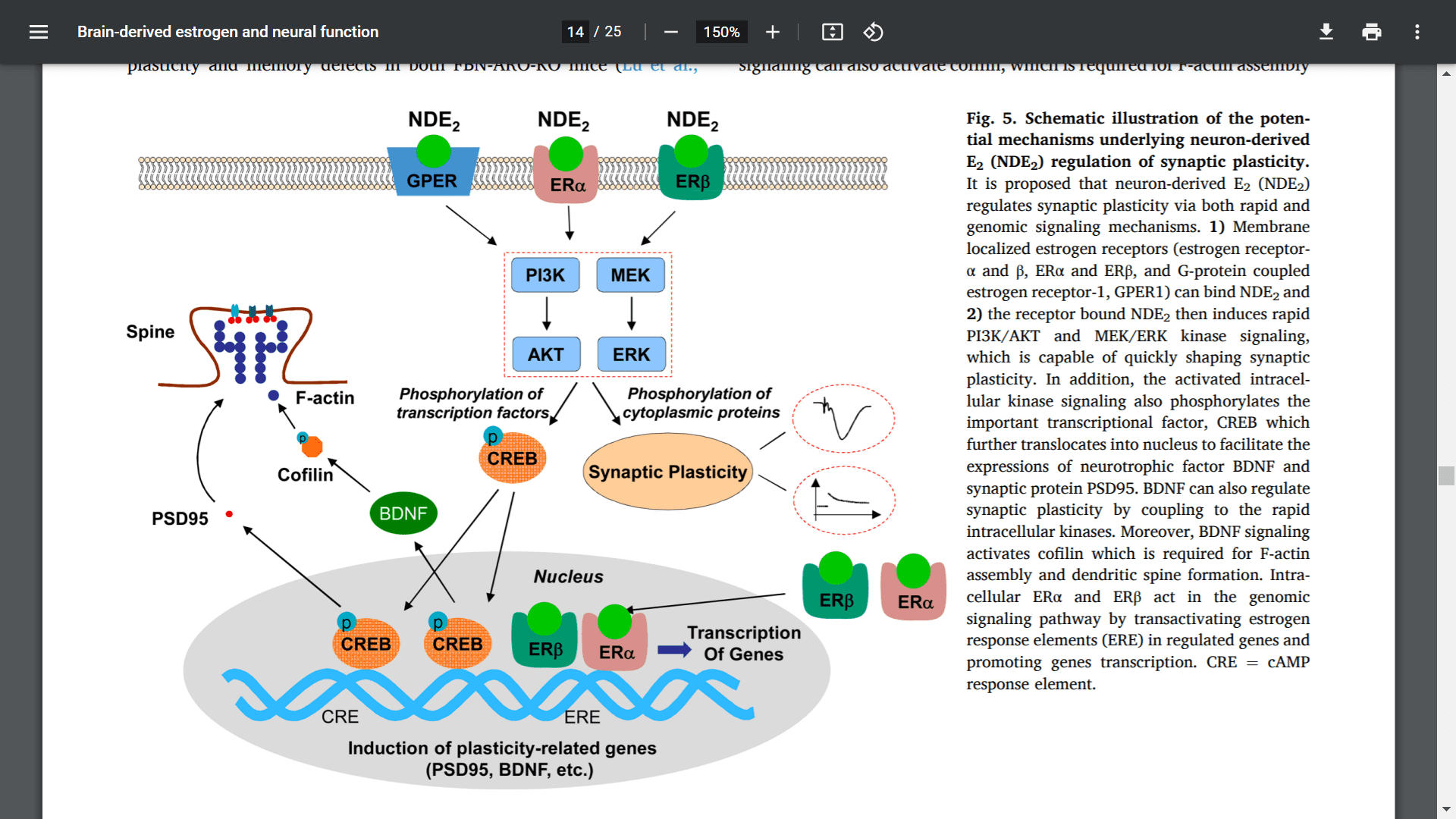 Fig. 6. Cognitive functions regulated by neuron-derived E2 (NDE2) and the commonly used behavioral tests for rodent studies. Neuron-derived E2 (NDE2) is critical for hippocampus-dependent spatial reference memory, which is often tested using the Barnes Maze test. Hippocampus-dependent recognition memory is another important cognitive function that is regulated by NDE2 and which can be assessed using the Novel Object Recognition Test (NORT). In addition, NDE2 was also demonstrated to regulate contextual, but not cued fear memory, which can be evaluated using Fearing Conditioning Test. Finally, NDE2 is essential to prevent depressive-like behavior in female mice, which can be tested with the Forced Swimming Test. 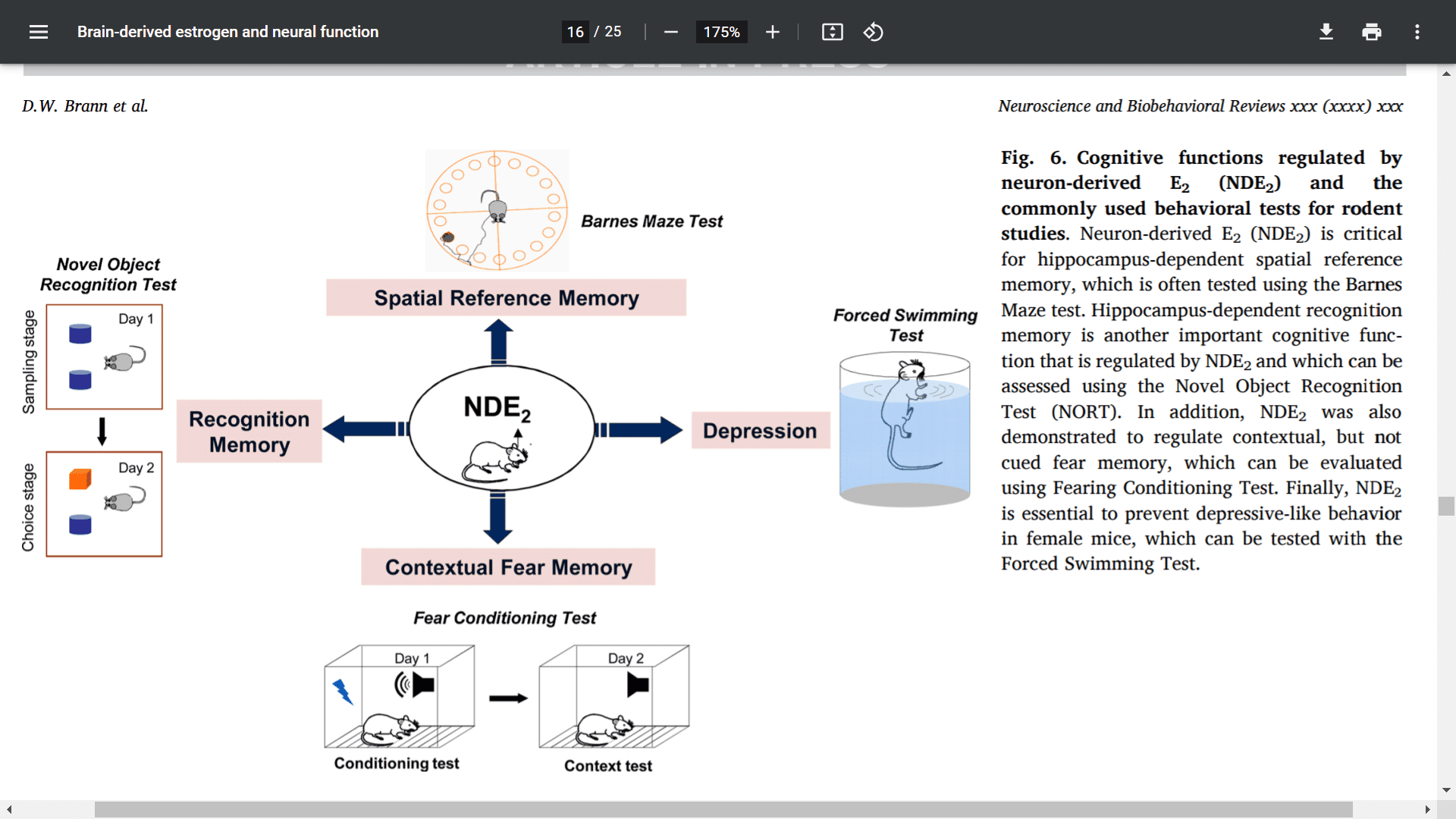 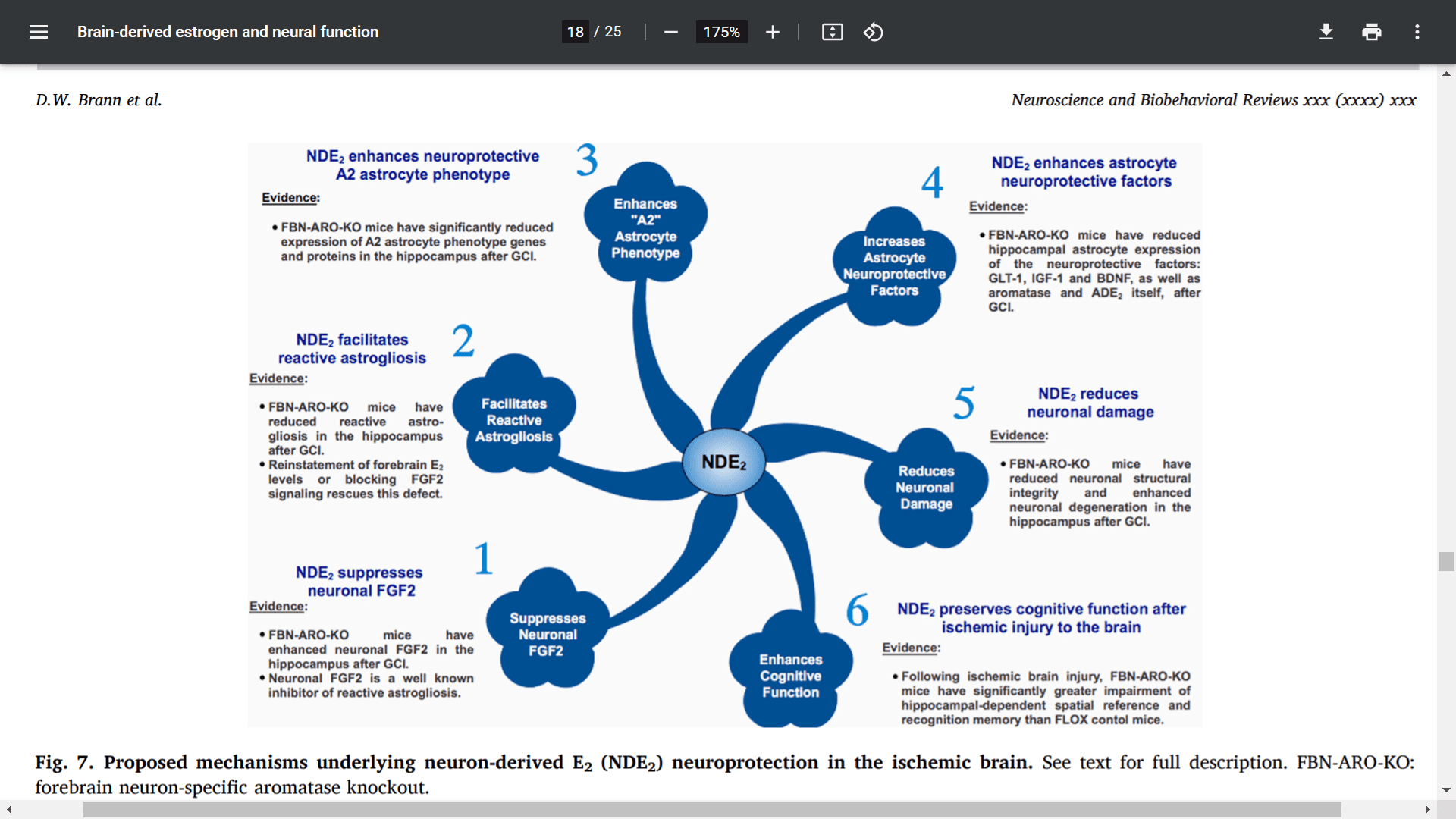 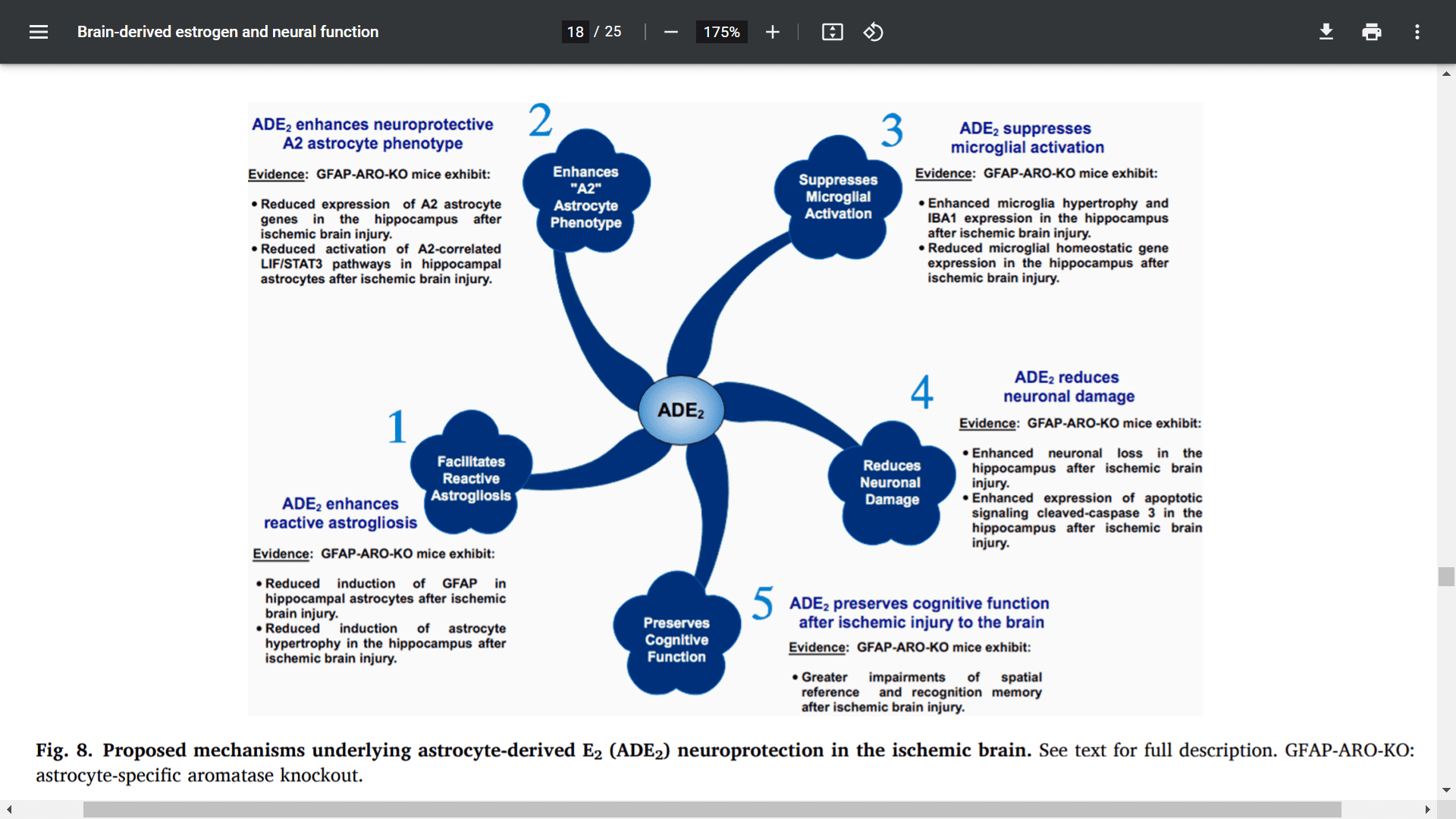