Since it was first synthesized in 1935, testosterone (T) has been viewed as the mythical Fountain of Youth, promising rejuvenation, restoring sexual appetites, growing stronger muscles, and quick thinking. T is endowed with direct effects on myocardial and vascular structure and function, as well as on risk factors for cardiovascular (CV) disease. Indeed, low serum T levels are a risk factor for diabetes, metabolic syndrome, inflammation, and dyslipidemia. Moreover, many studies have shown that T deficiency per se is an independent risk factor of CV and all-cause mortality. On this background and due to direct-to-patient marketing by drug companies, we have witnessed the widespread use of T replacement therapy (TT) without clear indications particularly in late-life onset hypogonadism. The current review will dwell upon current evidence and controversies surrounding the role of T in the pathophysiology of CV diseases, the link between circulating T levels and CV risk, and the use of replacing T as a possible adjuvant treatment in specific CV disorders. Specifically, recent findings suggest that heart failure and type 2 diabetes Mellitus represent two potential targets of T therapy once that a state of hypogonadism is diagnosed.

Since it was first synthesized in 1935, testosterone (T) has been viewed as the mythical Fountain of Youth, promising rejuvenation, restoring sexual appetites, growing stronger muscles, and quick thinking. T is endowed with direct effects on vascular and myocardial structure and function, as well as on risk factors for cardiovascular (CV) disease (D). Reduced T levels are linked to premature coronary artery disease (CAD), unfavorable effects on CVD risk factors, including type 2 diabetes (T2D) and metabolic syndrome (MS), and with increased risk of CV mortality. Although serum T concentrations decrease with age, several epidemiological studies showed that this association remains even the following correction for age. The key symptoms suggesting T deficiency (TD) mostly involve the sexual life, with reduced libido and erectile dysfunction, but also include fatigue (due to anemia and muscle loss), back pain (osteoporosis), weight gain, gynecomastia, and vasomotor symptoms. Testosterone replacement therapy (TT) is currently employed to treat men with hypogonadism, but it also has specific CV effects.

*This review will dwell upon current evidence and controversies surrounding the role of T in the pathophysiology of CVD, and its potential use in the treatment of these disorders. Notably, we preferred the term biochemical TD (BTD) and syndromic TD (STD) to indicate low T states associated or not with clinical symptoms or signs, and TT rather than TRT or TST in accordance with the current thought of the leaders in the field.

The T release from the Leydig cells in the testis is highly regulated by a complex feedback loop (Figure 1). The gonadotropin-releasing hormone (GnRH), secreted from the hypothalamus, governs the hypothalamus-pituitary-testes (HPG) axis by stimulating the anterior pituitary to produce the luteinizing hormone (LH)1. Then, LH binds to its receptors on Leydig cells and stimulates T synthesis.

The release of GnRH into the pituitary portal circulation, and LH from the adenohypophysis, is under the negative feedback regulation of T and oestradiol (E2) derived from T aromatization. Circulating T is bound predominantly to sex hormone-binding globulin (SHBG) and albumin, and to a lesser extent to corticosteroid-binding globulin and orosomucoid2; free T is only 1-4%2. According to the free hormone hypothesis, unbound T is believed to be the biologically active form2. T is peripherally converted to oestradiol, via the action of the aromatase enzyme, and to dihydrotestosterone (DHT), via 5α-reductase 3 . T and DHT bind to the androgen receptor (AR) in several tissues, with DHT having a greater affinity than testosterone; however, DHT is considered clinically relevant only for tissues where the 5α-reductase is highly expressed, mainly the genitalia (during development) and the adult prostate, skin, and liver4, 5. Most human studies exploring the effect of androgens on CV function have focused only on the most abundant testosterone, and despite some evidence support a role for DHT levels in sexual symptoms, should not be routinely included in the primary diagnosis of hypogonadism4, 5. The activation of AR by T or DHT is inversely related to the number of polyQs, a common polymorphism of the receptor, responsible for attenuation of signal transduction6. In experimental and pre-clinical studies, an additional non-canonical (non-genomic action) ARindependent action has been reported, to explain some of the ultrarapid effects of T. Finally, an effect of the SHBG-androgen complex, through the megalin system has been recent postulated3.

In summary, the complex mechanisms underlying the synthesis, delivery, pre-and-post receptorial regulation of the androgenic pathway should be taken into account when reviewing the effect of T on the CV system.


3. Mechanism(s) of action of testosterone on the CV system from bench to bedside

A schematic representation of the T effects on various targets of the CV system is depicted in Table 1. For simplicity, the sets of evidence have been cauterized into four groups (i.e., effects on vascular structure, vascular function, myocardial structure, and myocardial function). In light of the interplay with the CV function, a subchapter on the effect of T on the immune system has also been included among putative mechanisms.


In summary, experimental studies suggest T may exert an immune-modulatory effect, mitigating excessive responsiveness and autoimmunity; such an effect in the short term does not seem to affect large vessel disease. However, as recently shown in COVID-19, in the presence of non-gonadal illnesses, men with a higher number of poliQ (reduced androgen activity) seems at higher risk to develop hyperinflammation64, suggesting that T level and action should always be evaluated in the context of the very frequent AR variants (poliQ or CAG repeats). Conversely, shorter polyQ in the AR has been associated with an increased risk of prostate cancer, raising an important warning6. How AR polymorphism may explain some of the controversies on the association between T and CVD remains unaddressed and such uncertainty may limit the generalizability of clinical findings thereafter reported.

*The gap in evidence and future directions

Reviewing current literature about T and CVD leaves several controversies still pending, mostly because of the weaknesses of the study design of the majority of clinical studies available (e.g., observational studies, which do not prove causation given their intrinsic nature) and the lack of robust trials (e.g., randomized double-blind placebo-controlled studies) enough powered to provide definitive answers. Further, considering the impressive wideness of the field, our review could not cover all the aspects of the intricate relationship between T and CV. On the other hand, the major strengths include an up-to-date and deep review of the most published studies in the field, and the coverage of several hot topics, with particular attention to translational data; furthermore, the current review provides readers with a snapshot of the potential use of T replacement treatment in specific CV diseases. Hopefully, it may be viewed as a thought-stimulating article in a field that has been widely explored in the past originating significant controversies.

Reviewing the rich literature dwelling upon TT and CV system leaves a feeling of incompleteness and unexpressed potential, like an orchid that never blooms. On the one hand, the exploitation of T properties might in theory portend to widespread use of a TT in broad CV disorders; on the other hand, safety issues strongly limit T utilization in clinical practice. Table 2. Key observational studies dwelling upon the association between Testosterone levels and outcomes. 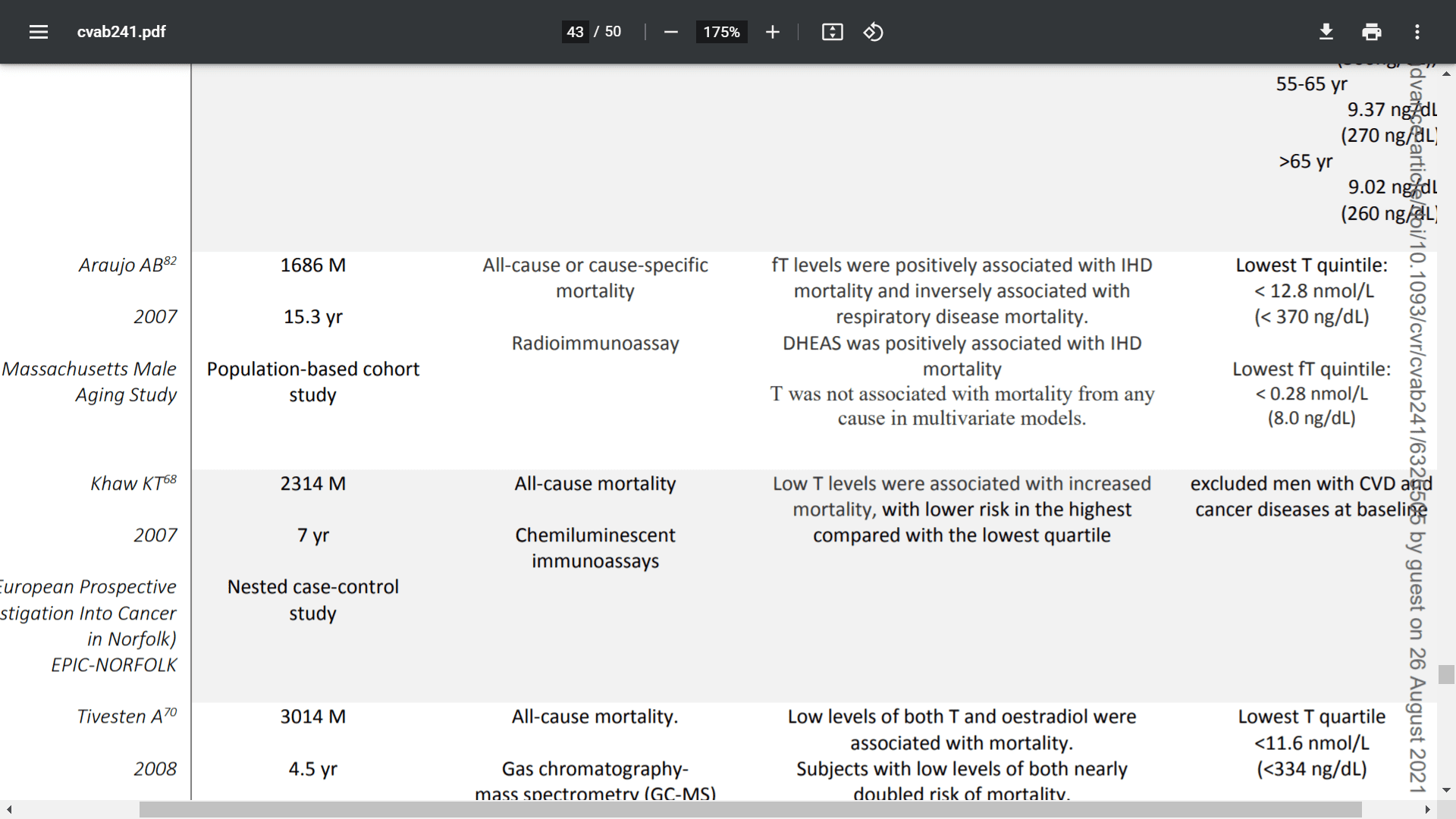 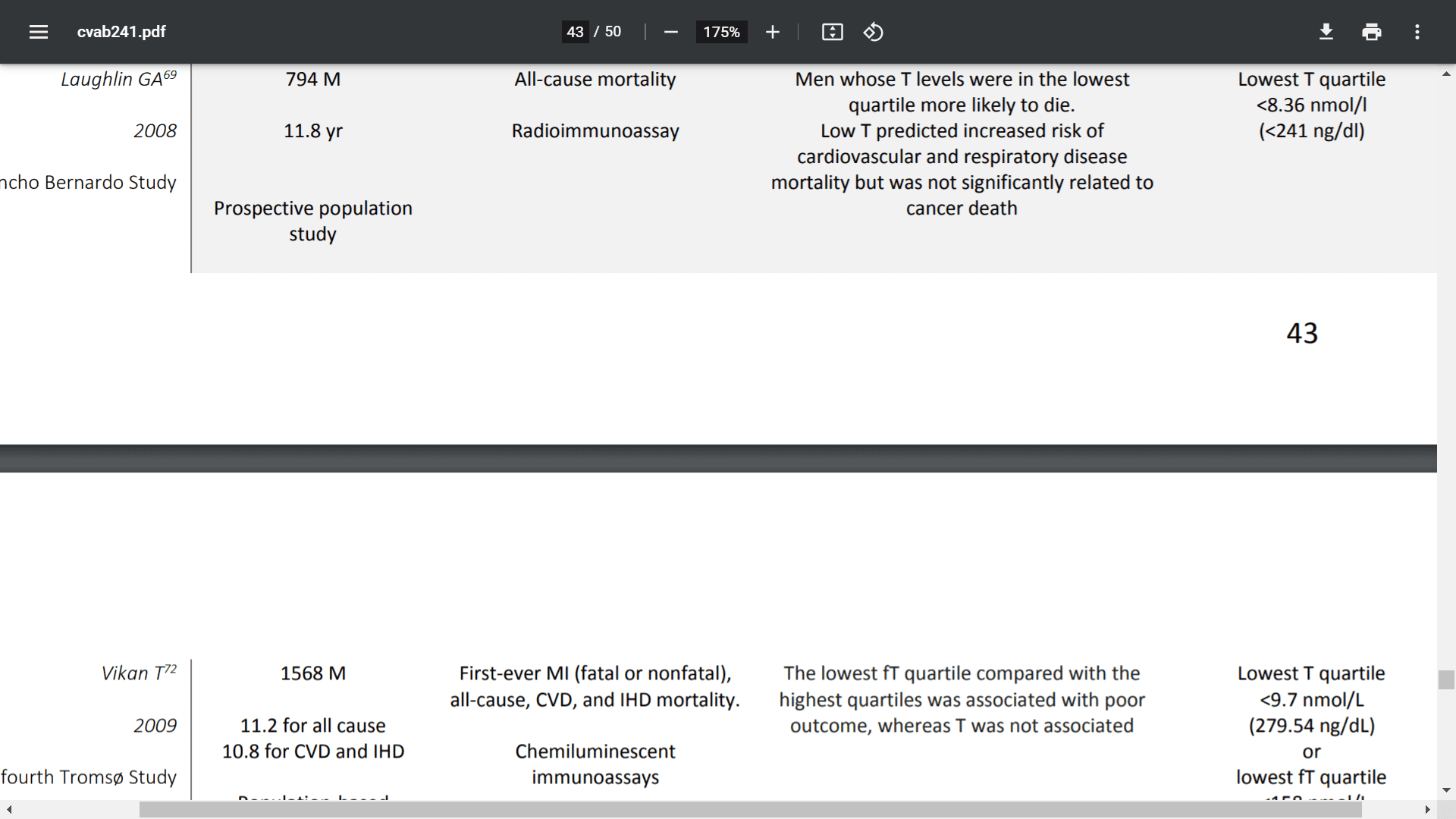 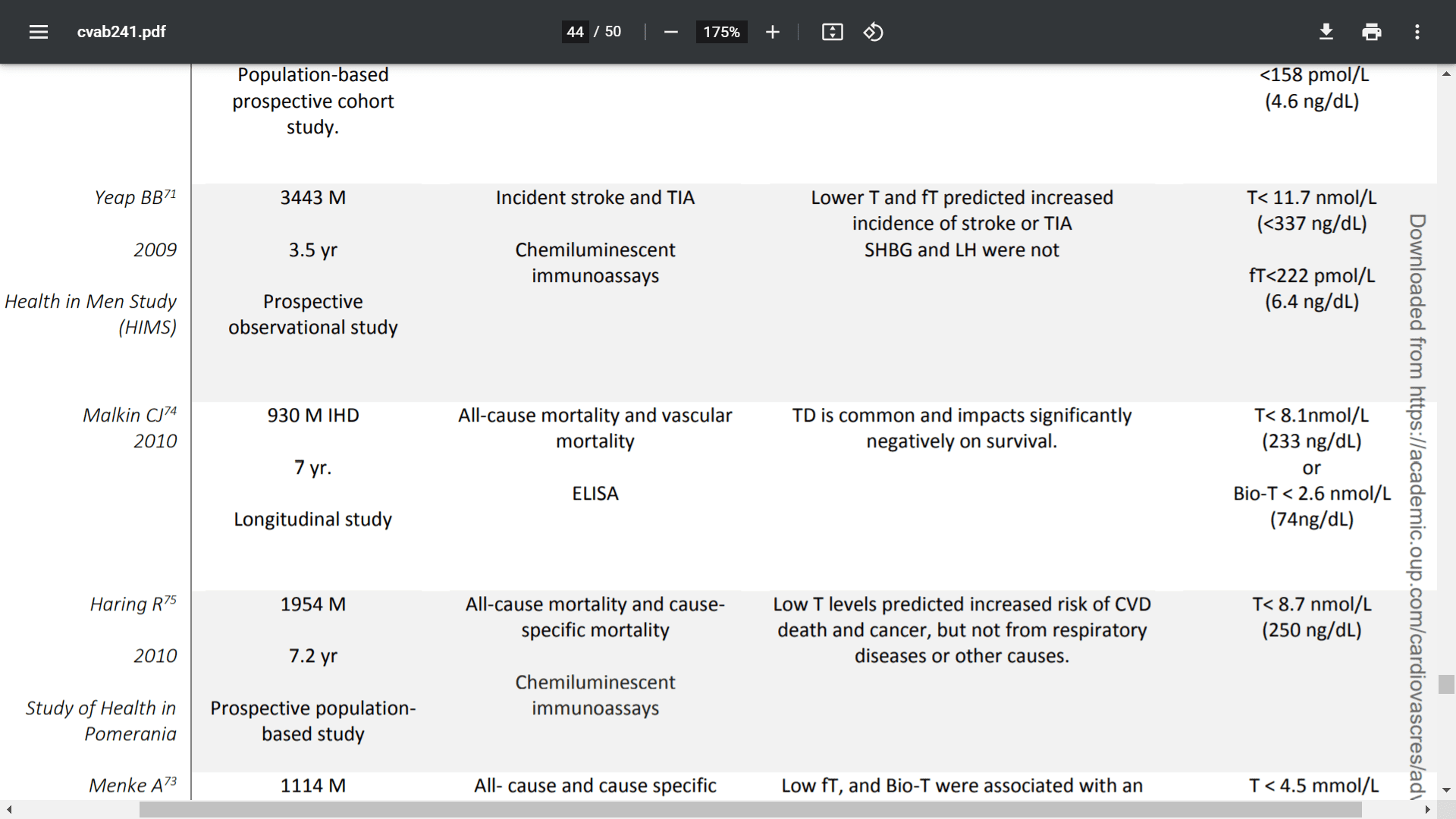 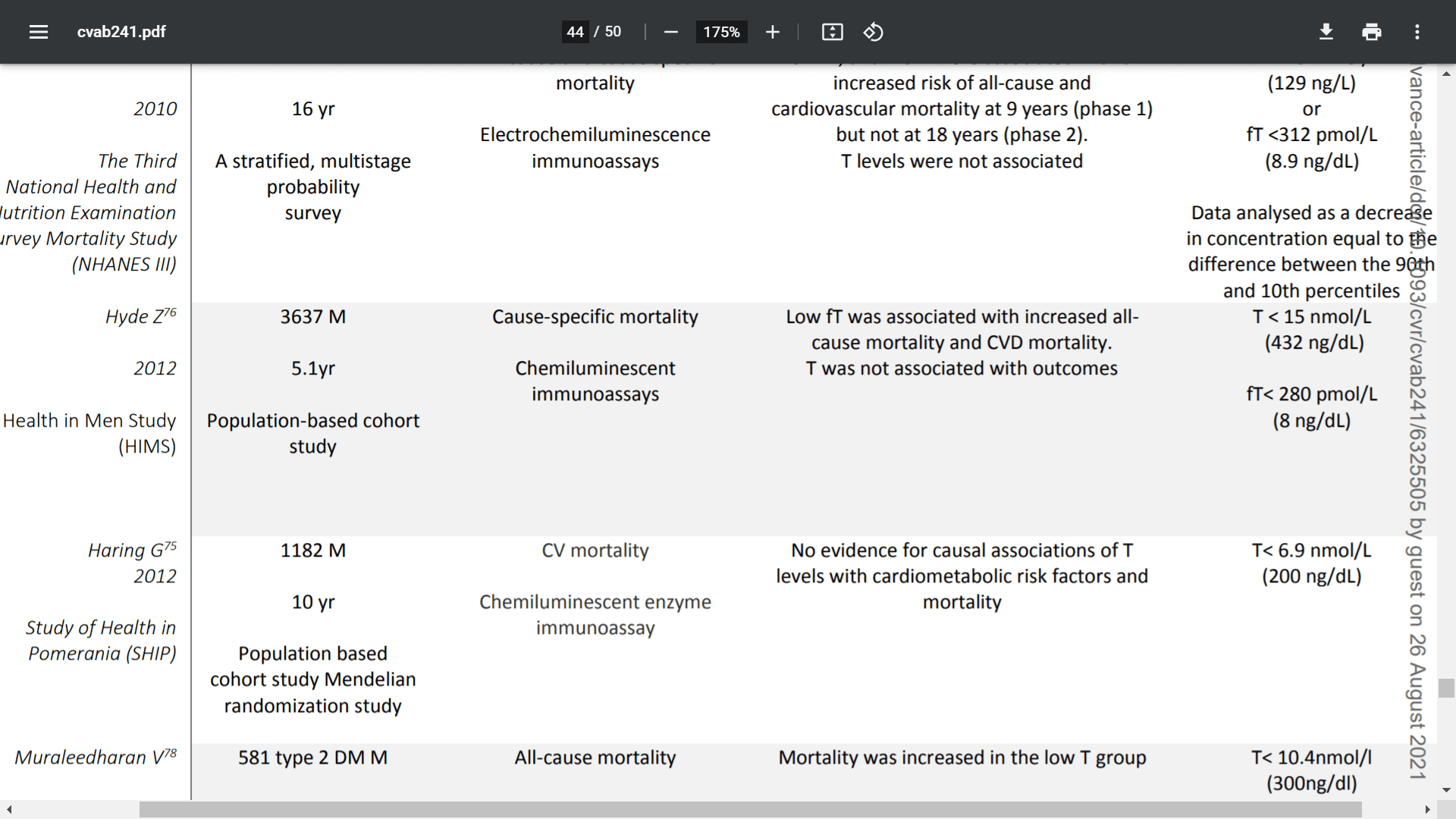 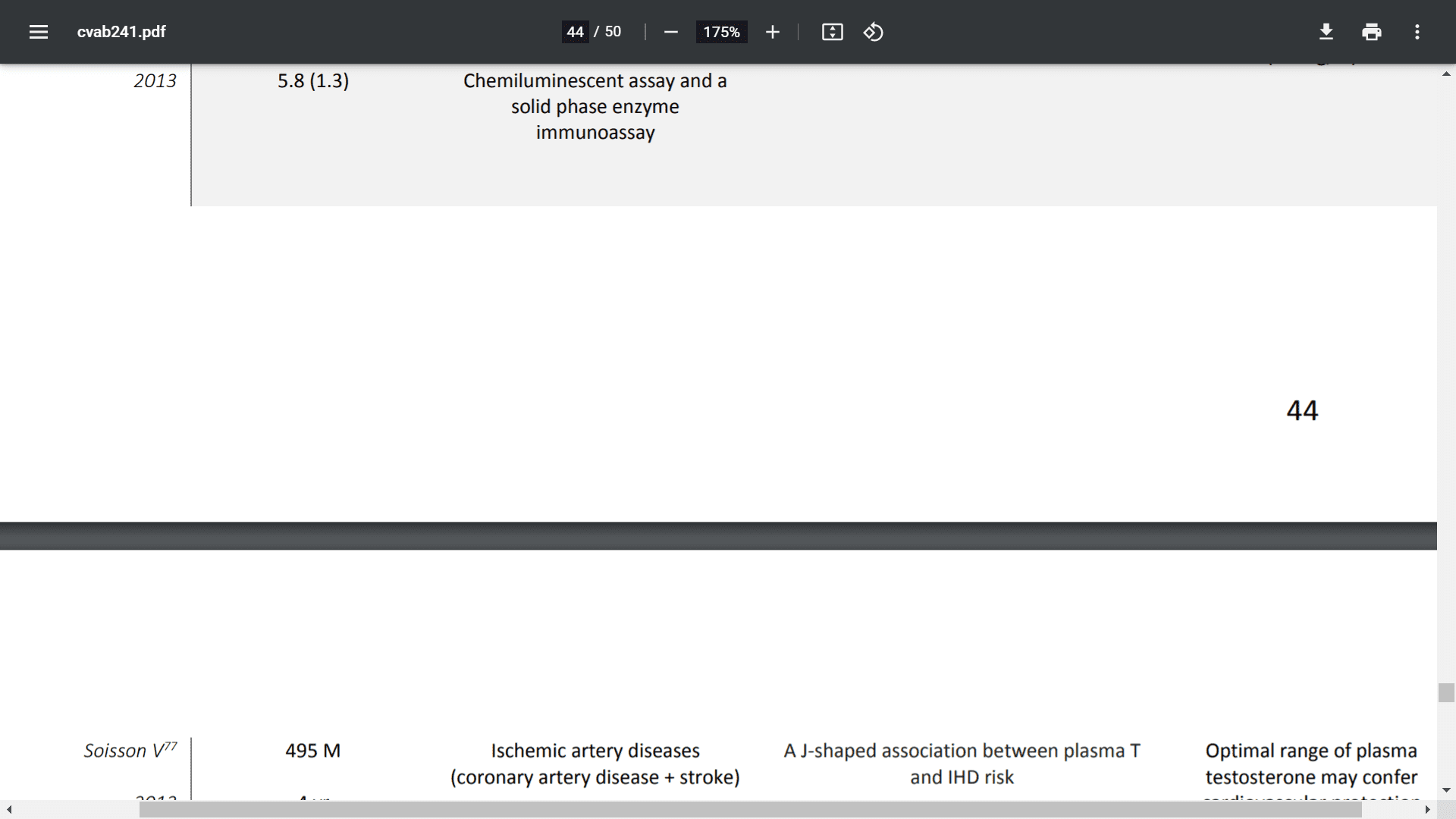 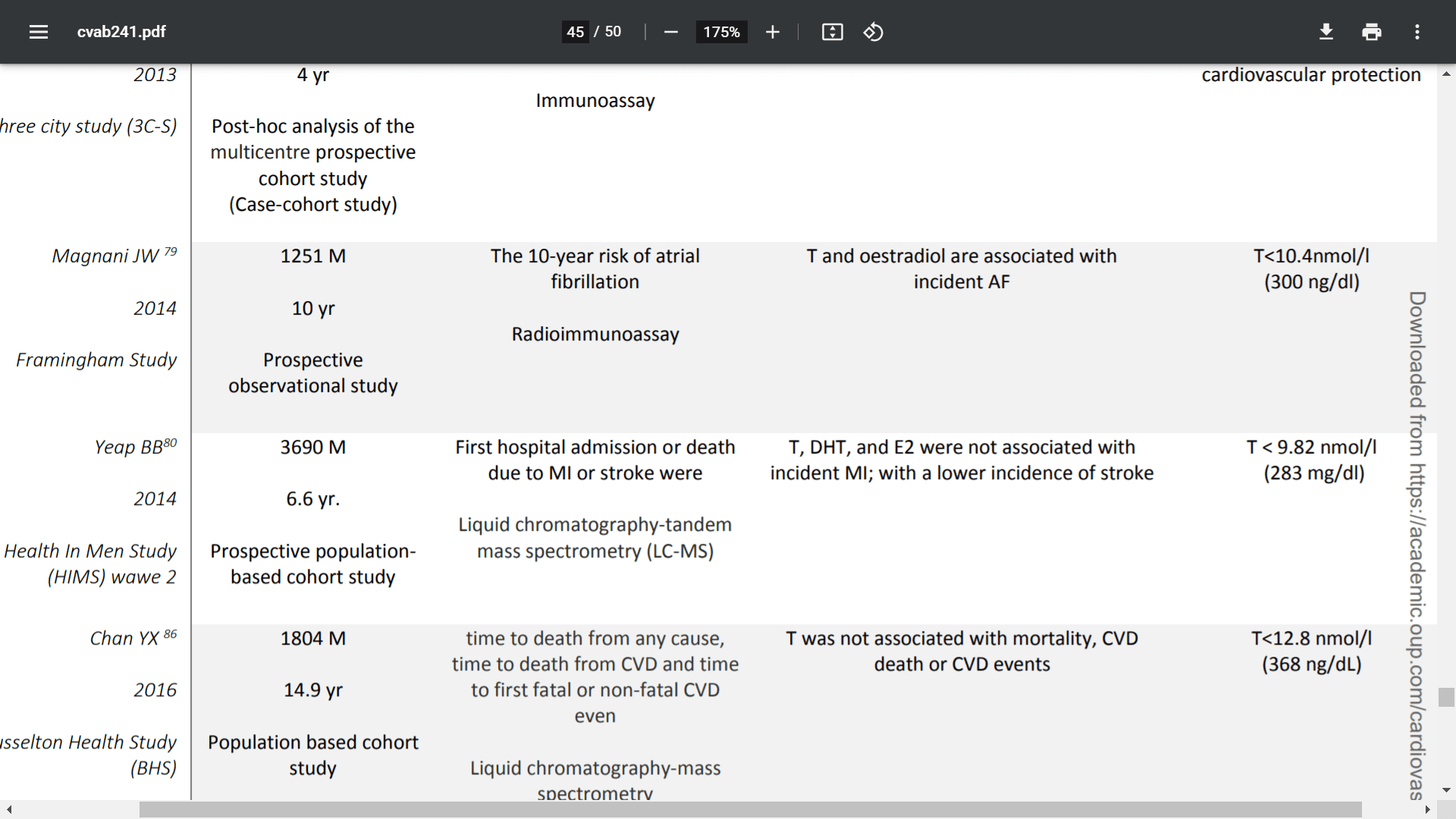 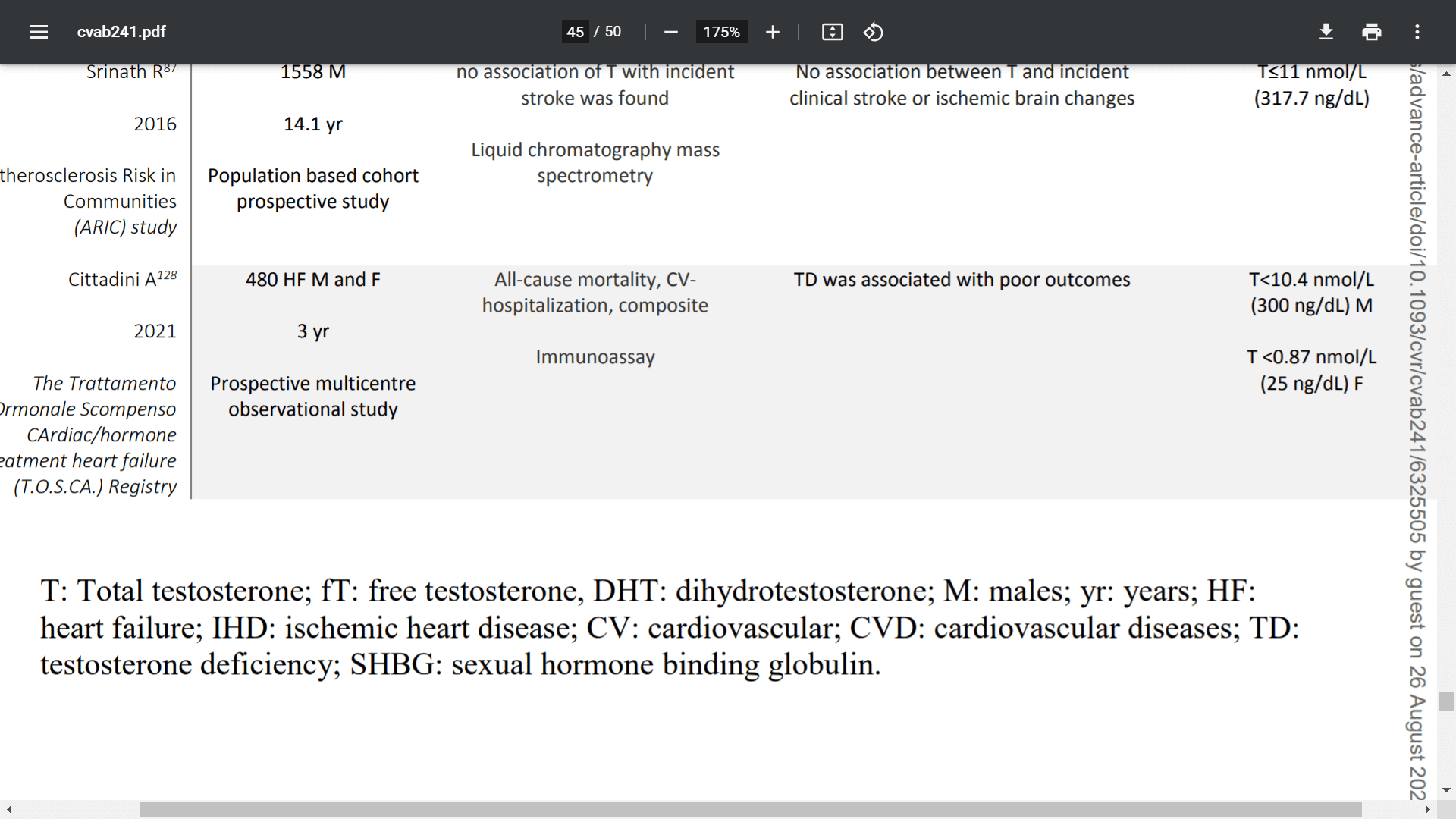 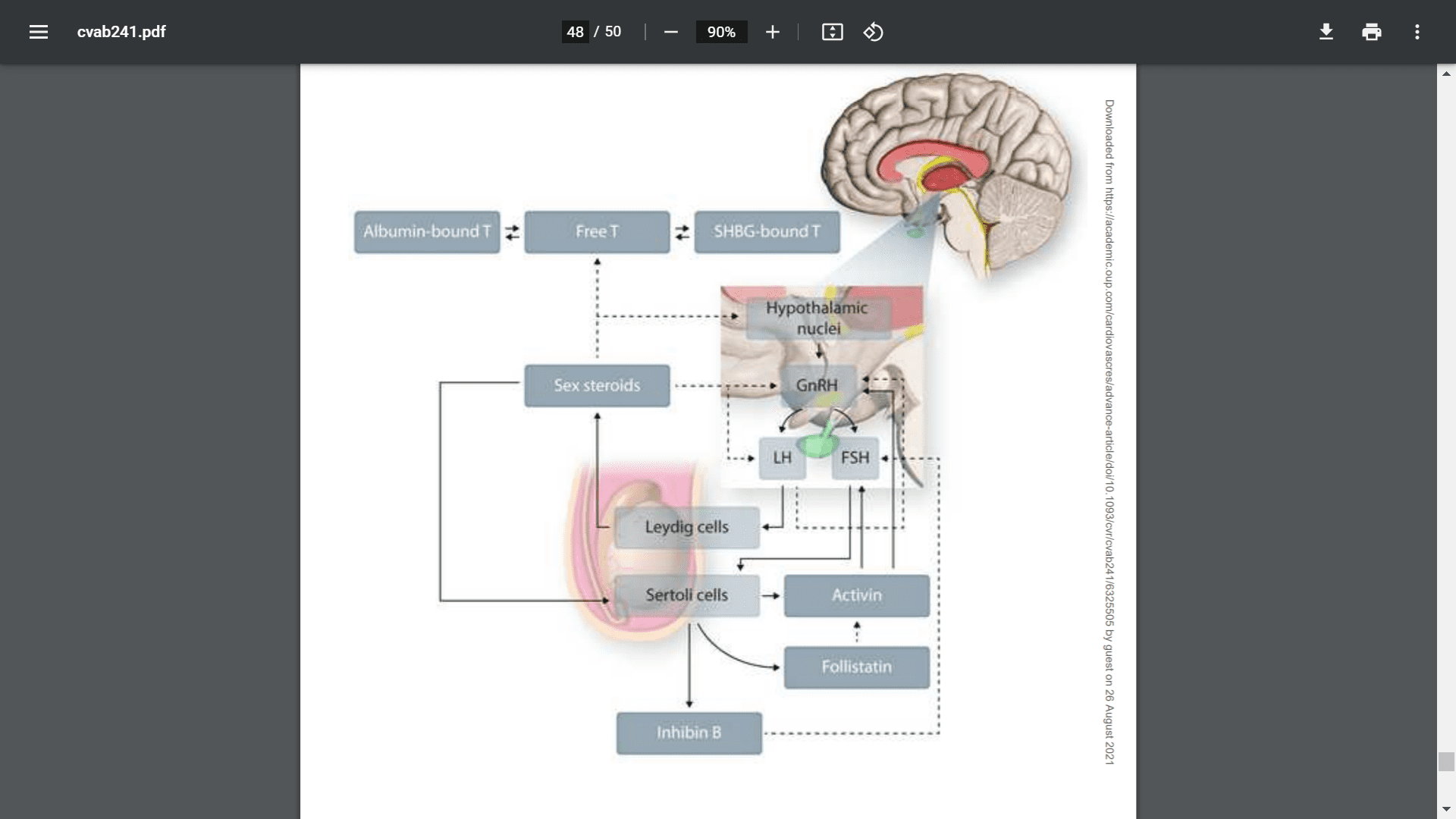 Figure 2 Summary of the experimental evidence on the molecular effects of testosterone in A endothelial cell, B cardiomyocyte, and C vascular smooth muscle cell. Depicted targets are related to murine or human in-vivo or in-vitro studies using testosterone or DHT. 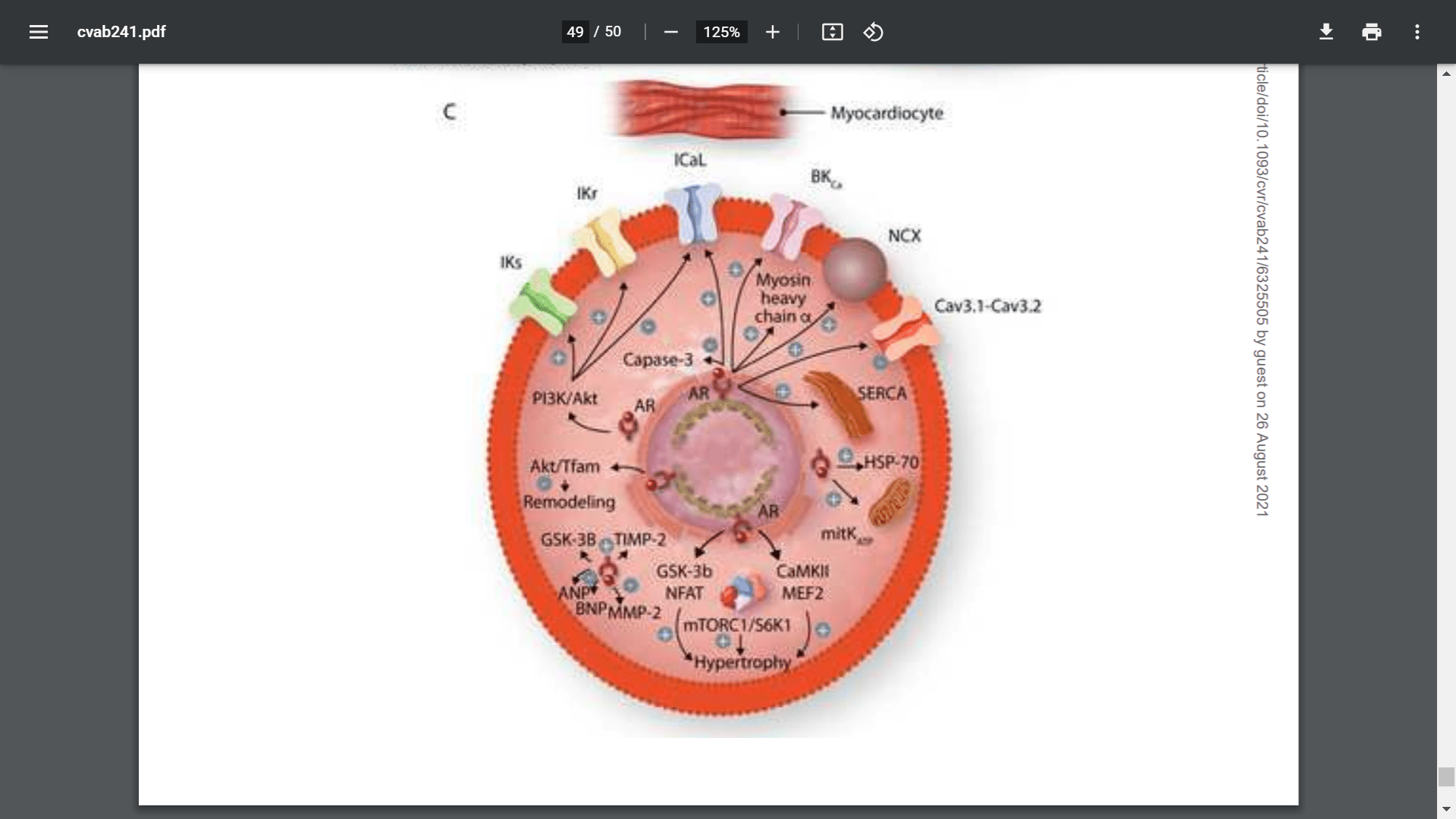 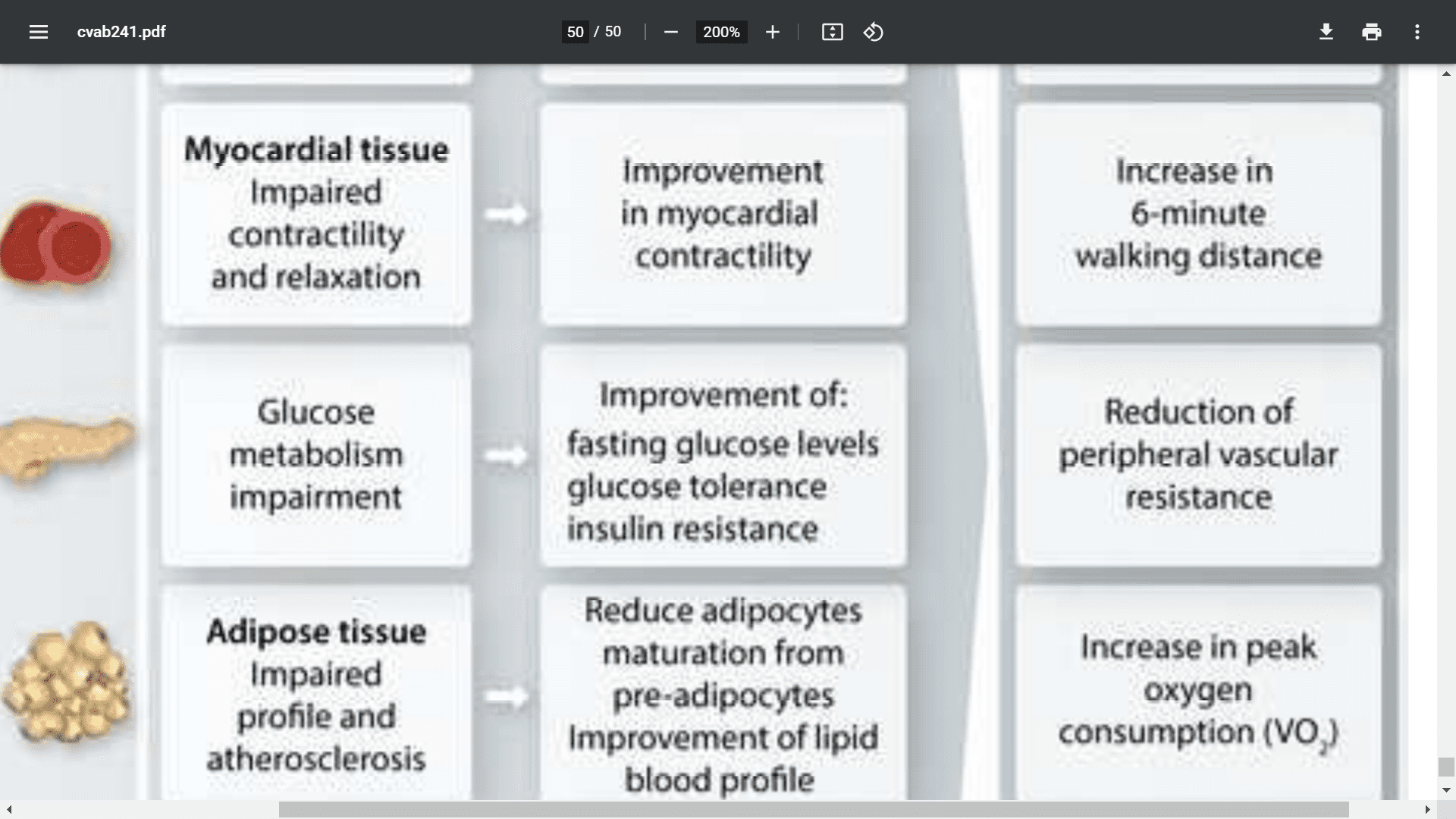 *On this basis, in 2018 the TRAVERSE trial was implemented, aimed at evaluating the effect of TT on MACE and efficacy measures in hypogonadal men (NCT03518034). The adequate statistical power of the trial enrolling 6,000 men will hopefully provide next year (2022) a definitive answer to the outstanding issue of CV safety of TT.

A Study to Evaluate the Effect of Testosterone Replacement Therapy (TRT) on the Incidence of Major Adverse Cardiovascular Events (MACE) and Efficacy Measures in Hypogonadal Men ( TRAVERSE ) - Full-Text View - ClinicalTrials.gov Brief Summary: This is a blinded and placebo-controlled study of...

Urology Times® is celebrating its 50th anniversary in 2022. To mark the occasion, we are highlighting 50 of the top innovations and developments that have transformed the field of urology over the past 50 years. In this installment, Amy Pearlman, MD, interviews Mohit Khera, MD, MBA, MPH on how...