Materials and Methods: Case records were reviewed for three men with advanced PCa treated with TTh for improved quality of life. Two had bone metastases and nephrostomies at baseline. The third had a biochemical recurrence and continued TTh after developing bone metastases. All rejected androgen deprivation therapy, desired improved quality of life with TTh, and accepted the risk of rapid PCa progression and death.

Results: All men experienced substantial symptomatic and health benefits during TTh, including improved strength, vigor, and sexuality. Two reversed substantial weight loss. A 94-year-old man with baseline PSA of 546 ng/mL survived 11 months with continuous TTh, with the last PSA of 2493 ng/mL. Two men in their 60s received some form of TTh for 3.5 and 8 years, respectively, and are still alive. None experienced sudden major adverse events. Continuous TTh resulted in a progressive rise in PSA to high values. The combination of TTh and enzalutamide provided moderate protection against weakness and fatigue with PSA <10ng/mL for 6 months. PSA values fluctuated from <1.0 to >100 ng/mL within 1–2 months depending on recent androgen status. The most promising strategy appears to be a modified bipolar androgen therapy consisting of repeating cycles of 8 weeks of high-dose TTh followed by 4 weeks of enzalutamide, allowing for prolonged periods of vigor while maintaining PSA control.

Over the last two decades, there has been a major reevaluation of the biology of androgens and prostate cancer (PCa).1 Whereas it has been long believed that offering testosterone therapy (TTh) to a man with PCa was like ‘‘pouring gasoline on a fire,’’2 numerous case series and observational studies have failed to demonstrate an increased risk of disease recurrence or progression with TTh after radical prostatectomy,3 radiation therapy,4 and even in men on active surveillance.5,6 This lack of progression may be attributed to saturation, namely, the finite ability of androgens to stimulate PCa growth, with a maximum achieved at a relatively low serum testosterone concentration of *250 ng/mL.7 It is now commonplace for health care providers to offer TTh to men after definitive treatment for localized PCa at low risk for recurrence. In 2016, Ory et al. reported low recurrence and progression rates in men with PCa who received TTh after surgery, radiation, or on active surveillance, concluding, ‘‘.our study supports the hypothesis that testosterone therapy may be oncologically safe in hypogonadal men after definitive treatment or in those on active surveillance for prostate cancer.’’

However, there is extremely limited clinical experience with TTh among men with metastatic PCa (mPCa), due to the concern that any rise in serum T, even transiently as seen with testosterone flare with luteinizing hormone-releasing hormone agonists, may cause rapid disease progression, with associated morbidity and mortality.9 Standard treatment for many decades for men with metastatic PCa is androgen deprivation therapy (ADT),10 with the addition of newer agents as needed that are even more effective at lowering serum T or blocking its actions.11

Yet there is evidence to suggest TTh may not be as dangerous as previously believed. In vitro and animal experiments have shown growth suppression of androgen-sensitive PCa tumors with high androgen concentrations,12,13 and androgens have been shown to induce reversion of androgen-sensitive phenotypes in PCa cell lines that have developed androgen insensitivity.14 Of greatest clinical relevance, landmark studies involving serial cycling of supraphysiological and castrate levels of T within a 4-week period, called bipolar androgen therapy (BAT) in men with castrate-resistant PCa, have shown strong evidence of clinical response.15,16 These studies suggest a possible role for TTh in men with mPCa.

Presented here are clinical and prostate-specific antigen (PSA) responses to a variety of TTh strategies in three men with mPCa. The most promising of these strategies appears to be a modified BAT (mBAT) protocol to maximize the duration of TTh and its associated benefits followed by a shorter period of androgen blockade

In conclusion, these results suggest a potential role for TTh in selected men with advanced or metastatic PCa, especially for those who prioritize the quality of life. Further investigation is warranted to identify treatment strategies that provide adequate cancer control without the full negative impact of ADT on quality of life. Since there are no randomized controlled trials adequately powered to address safety for any of the strategies presented here, no clinical recommendations can be made on the basis of these three patients. Nonetheless, in the absence of an effective cure for mPCa, these results support a personalized approach to hormonal treatment in men with advanced PCa, particularly at end of life.

FIG. 1. PSA response to continuous T cypionate injections in a 94-year-old man with diffuse bony metastases and bilateral nephrostomy tubes. Baseline PSA was 546 ng/mL. Testosterone cypionate was administered in doses of 200 mg intramuscularly every 2 weeks. In early February 2016, the dose was increased to 400 mg every 2 weeks. He died in late May 2016. Testosterone levels reported as >1500 ng/dL are represented here as 1500 ng/dL. PSA, prostate-specific antigen 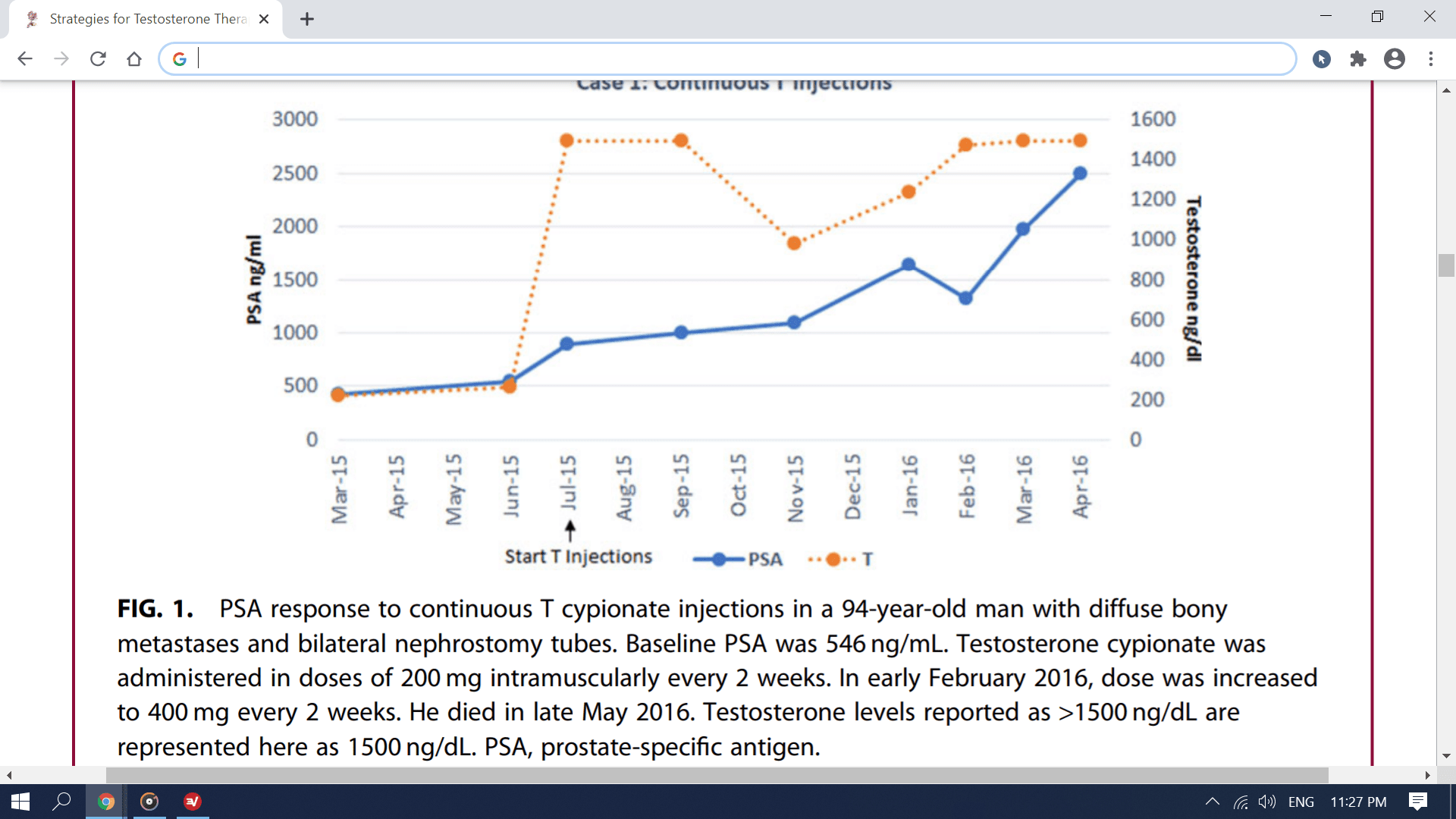 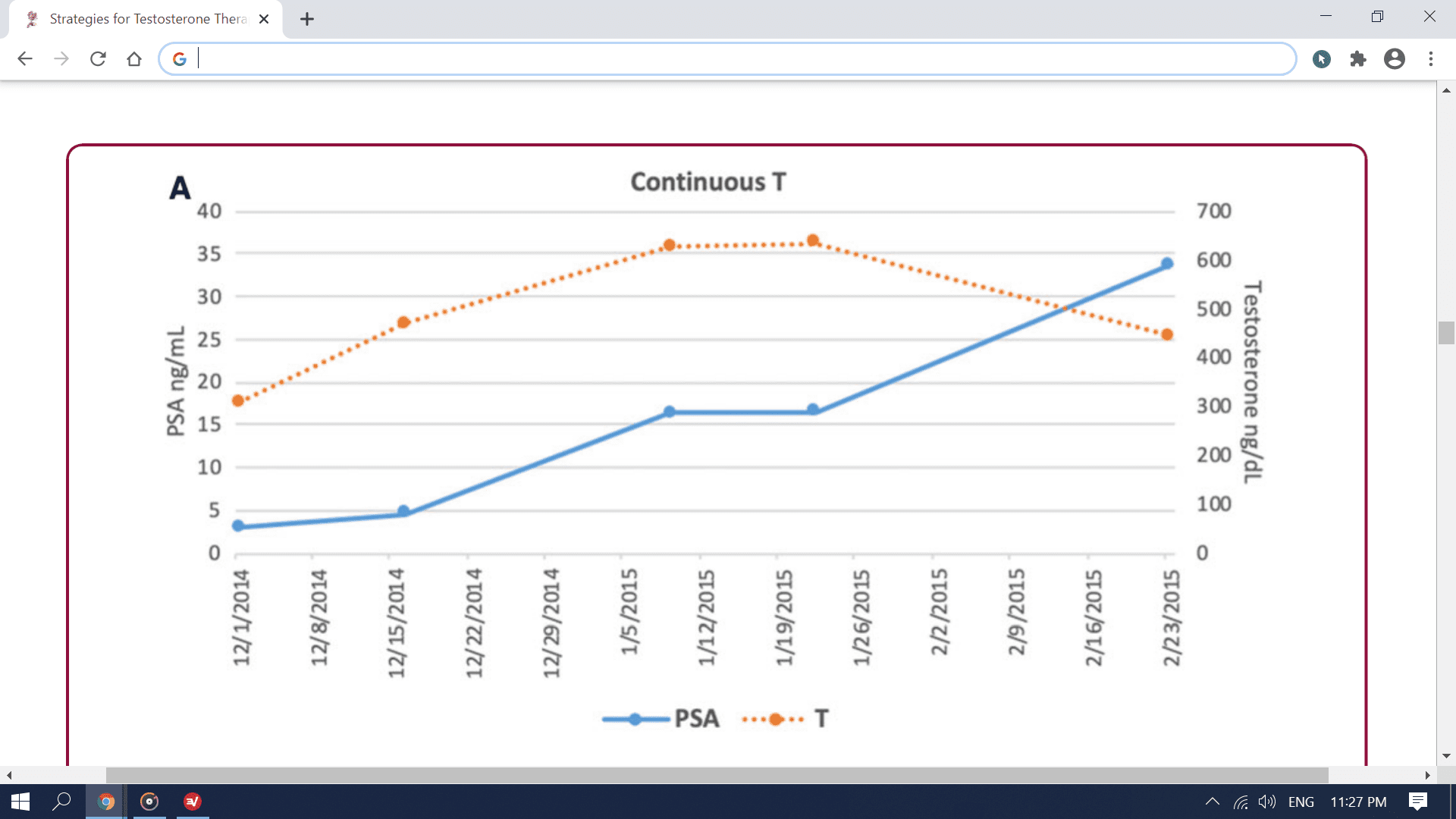 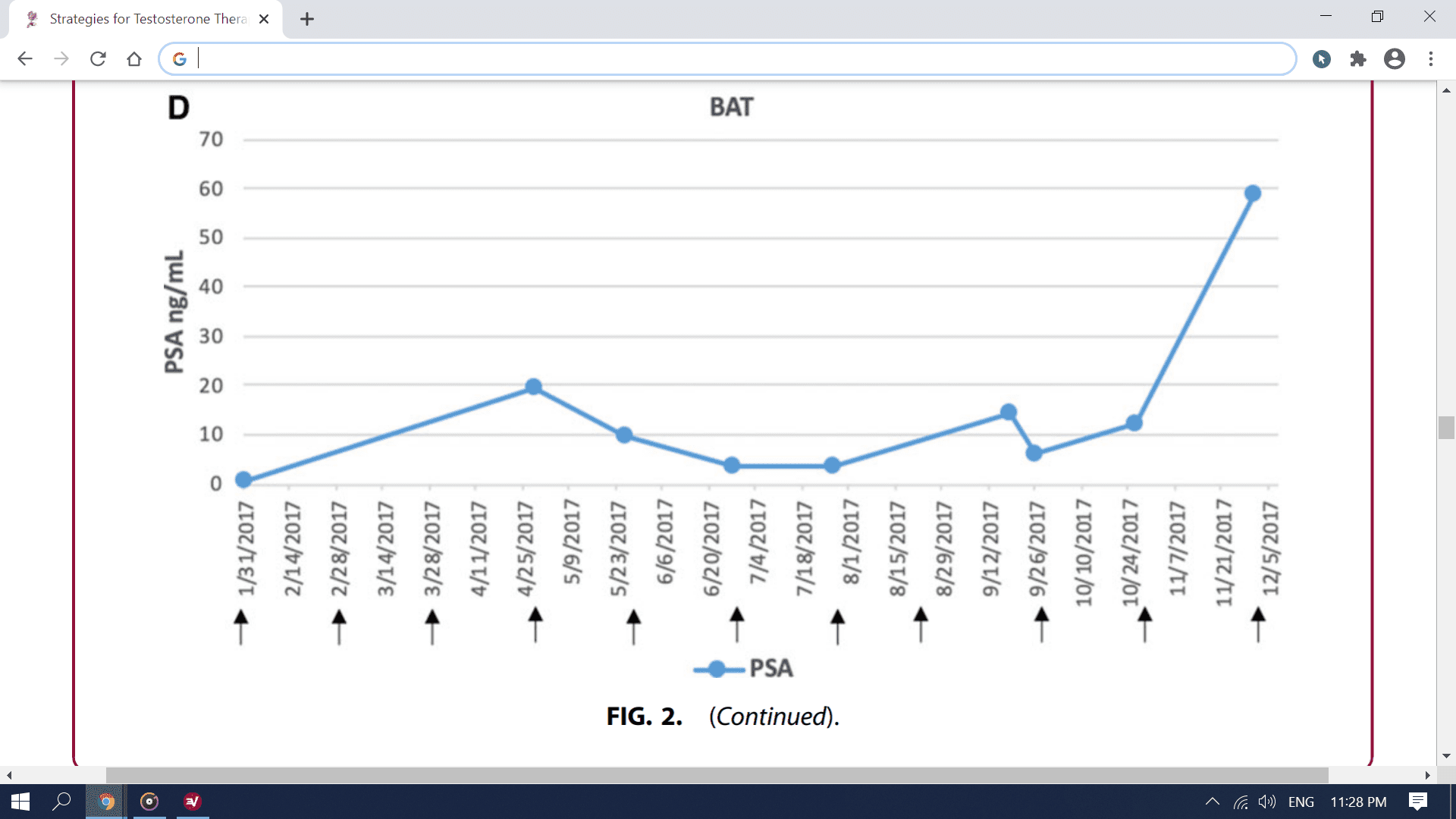 FIG. 3. PSA response to testosterone injections in a 61-year-old man with metastatic prostate cancer and nephrostomy tube, 5 years after radical prostatectomy with positive lymph nodes. PSA at presentation was 31 ng/mL. (A) Continuous T injections. Testosterone cypionate injections 400 mg intramuscularly were administered every 2 weeks. Note initial rise to 93 ng/mL with a subsequent decline to 51–60 ng/mL for 3–4 months before rising steadily to 185 ng/mL at 7 months. Arrow indicates the start of testosterone injections. Star indicates discontinuation of testosterone injections. (B) mBAT. Twelve-week cycles were initiated, consisting of 8 weeks of testosterone cypionate 400 mg intramuscularly every 2 weeks, followed by 4 weeks of daily enzalutamide 160 mg orally. Blood tests obtained at end of testosterone and enzalutamide periods. Arrow indicates the start of mBAT. PSA showed in log scale to preserve details of PSA values at nadirs. Note the upward slope of peaks and nadirs. Imaging studies showed no progression for *2 years, until April 2019 when new lesions appeared on bone scan and mBAT was discontinued. mBAT, modified BAT 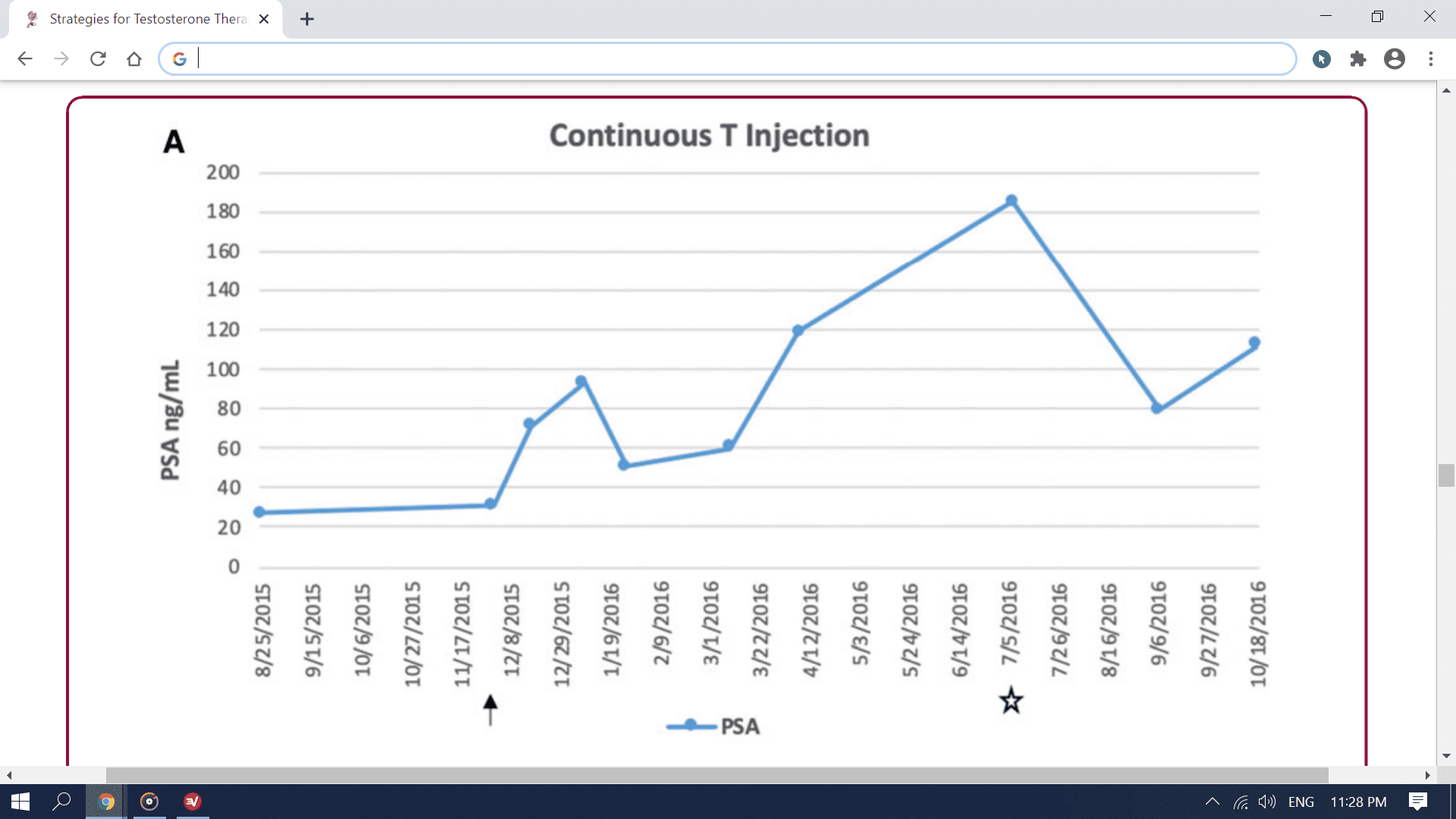 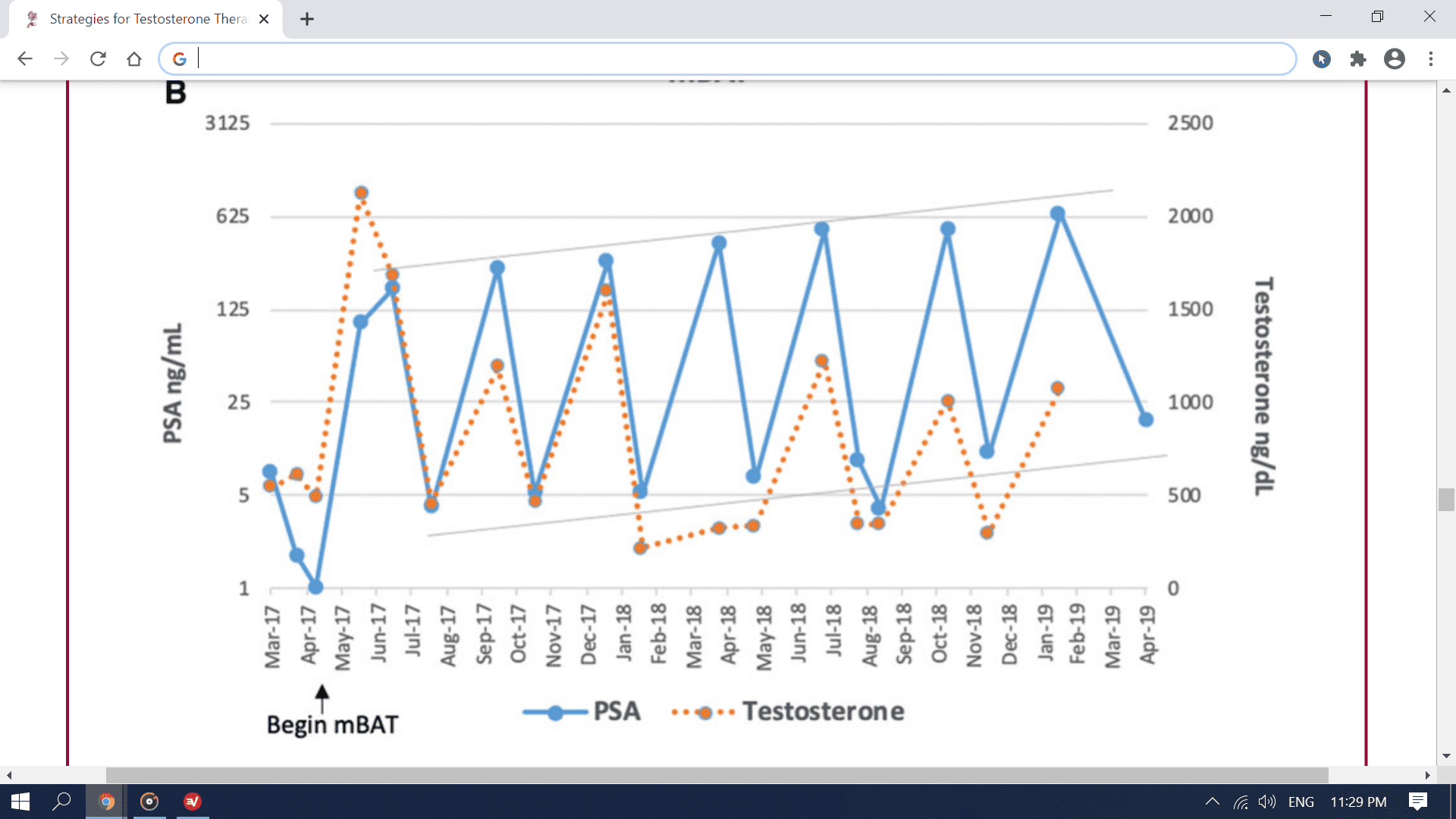 I have taken many psa test during my first course it went from 1.4 to 1.67 almost 0.3 exactly what was mentioned in one of the papers. After stoping it went down to 1.4 again.

currently I see my self moving between 1.4 and 1.67 as I change protocols.