With the evolving language regarding gender identity and sexual orientation, the authors believe that it is important to first define gender and sex. Gender refers to the attitudes, feelings, and behaviors that a given culture associates with a person’s biological sex. Sex is defined as either of the two main categories (male and female) into which humans and most other living things are divided based on their reproductive functions. The authors of this article will use the terminology.

“Female sexual dysfunction” as defined in the DSM-V1 to describe anyone assigned female at birth or anyone with female internal or external genitalia.


Female sexual pain disorder or genito-pelvic pain/penetration disorder (GPPPD) is defined as persistent or recurrent symptoms with one or more of the following for at least 6 months:

2. Marked fear or anxiety about vulvovaginal or pelvic pain in anticipation of, during, or as a result of penetration

3. Marked tensing or tightening of the pelvic floor muscles during attempted vaginal penetration.1


GPPPD, previously termed dyspareunia and/or vaginismus, first debuted in the Diagnostic and Statistical Manual of Mental Disorders (DSM-5) in 2013. It is classified as either lifelong or acquired and ranges in the degree of distress from mild, moderate to severe. The estimated prevalence of GPPPD in the United States varies between 3% and 25% with causes differing by age group.2 Women with GPPPD report significantly reduced quality of life and well-being. GPPPD can contribute to a decline in self-esteem, feelings of femininity and is associated with a negative body and genital self-image. GPPPD can pose a significant burden on the couple as well. The disordered cycle of pain can lead to fear, hypervigilance in sexual situations, or complete avoidance of sexual intimacy.3–5


Individuals with GPPPD often do not seek care despite the distressing nature of the disorder for a variety of reasons. These reasons include but are not limited to:

1. GPPPD was not previously regarded as a recognized disorder and instead viewed as a culturally taboo subject6

2. Feelings of shame and guilt by the individual because of cultural and personal stigmatization6,7

3. Lack of appropriately trained health care professionals that do not make an inquiry about sexual health in routine care visits. Provider reluctance to discuss sexuality may stem from a sense that this is not a medical problem, personal discomfort with sexuality, or lack of training/knowledge/time.8


Patients with GPPPD who do present for treatment may not receive appropriate treatment/ referral, which may lead to a further burden for the individual and partner as well as increased direct health costs. GPPPD symptoms are frequently multifactorial and require a multidisciplinary approach that assesses various factors including biological, psychological, sociocultural, interdependent pathophysiology, critical life events, and relational status.9–11 A comprehensive biopsychosocial approach should be implemented for assessment and treatment. The treatment plans should focus not only on difficulties with vaginal penetration and muscle tightness associated with sexual intercourse but also the psychological factors that contribute to sexual dissatisfaction and couple dynamics.12–14 Psychological factors that may contribute to dyspareunia include anxiety or guilt about intercourse, memories of distressing early sexual experiences, fear of penetration, unresolved anger, feelings of shame or guilt, and inadequate precoital stimulation.

*Anatomy/Physiology
A detailed understanding of female genital anatomy is crucial in providing comprehensive evaluation and optimizing treatment. The anatomic female sexual organs include the clitoris (glans and crura), labia major and minora, the vulvar vestibule, the vagina, the cervix, the vestibular bulbs, and the pelvic floor muscles.

*Genitourinary Symptoms of Menopause
The primary goals for treating GSM are alleviation of symptoms, restoring vaginal pH, and preventing recurrent urinary tract infections. A multimodal approach can be used to optimize results. 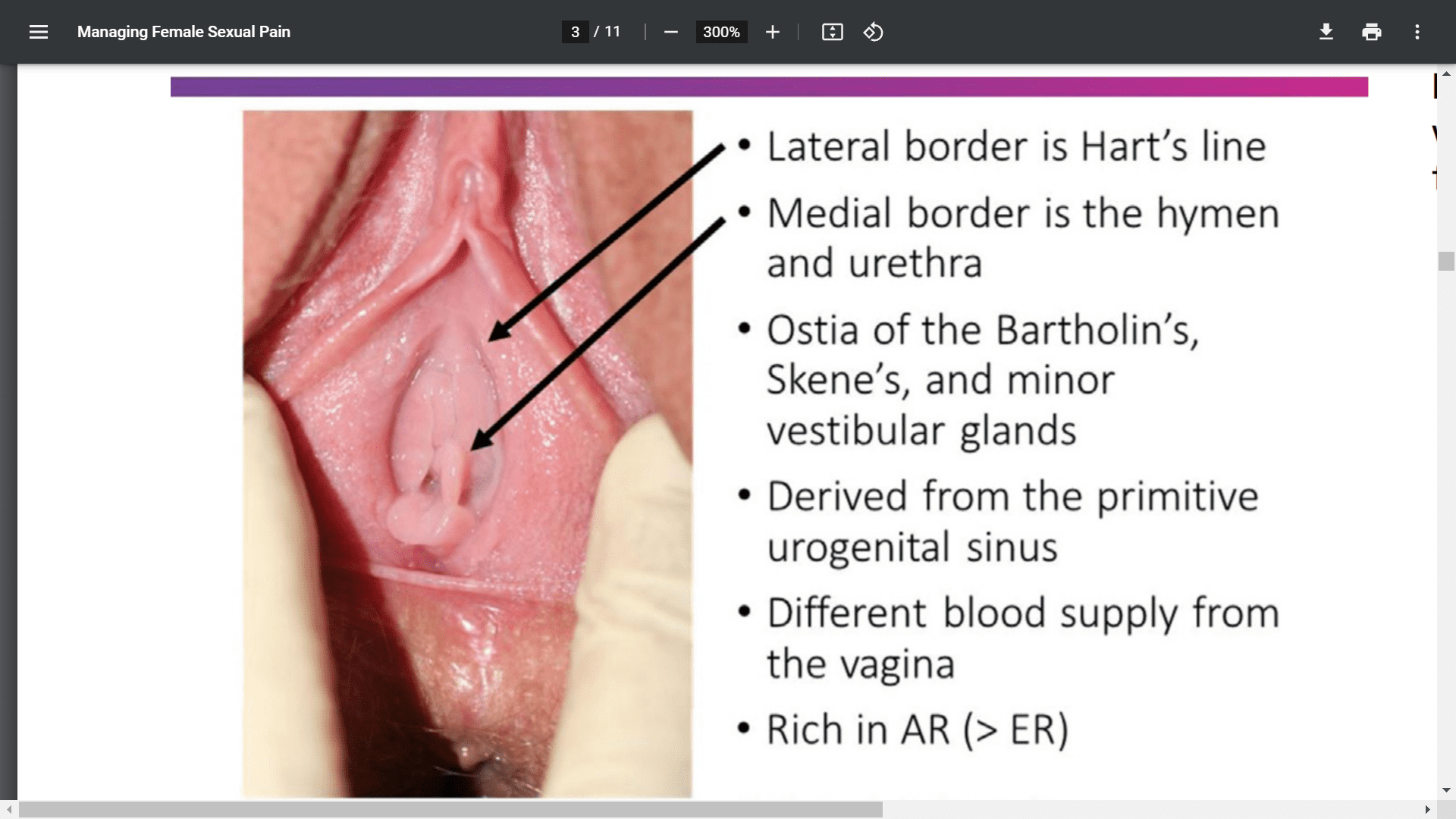 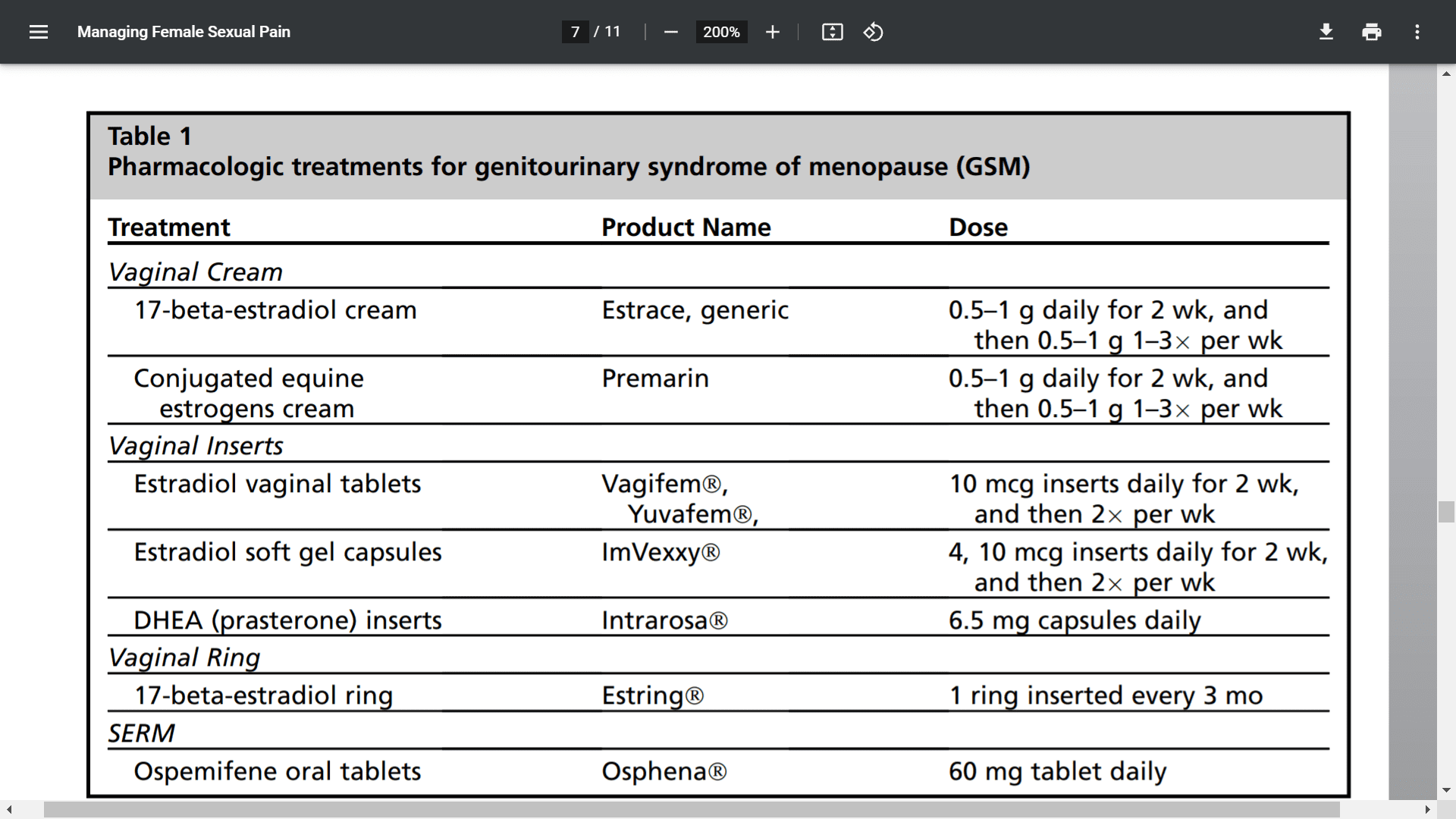 *Female sexual pain disorder or genito-pelvic pain/penetration disorder (GPPPD), previously known as dyspareunia, is defined as persistent or recurrent symptoms with one or more of symptoms for over 6 months