LOH: reductio ad absurdum of the cardiovascular risk–benefit of TRT

Background: Low testosterone (T) level is considered a marker of poor cardiovascular health. Ten years ago, the Testosterone in Older Men with Mobility Limitations (TOM) trial was discontinued due to a higher number of adverse events in men receiving T compared with placebo. Since then, several studies have investigated the risks of T replacement therapy (TRT) in late-onset hypogonadism (LOH).

Objective: To review the mechanism by which TRT could damage the cardiovascular system

Results: The mechanisms of T-mediated coronary vasodilation were reviewed with emphasis on calcium-activated and ATP-sensitive potassium ion channels. We showed how T regulates endothelial nitric oxide synthase (eNOS) and phosphoinositide 3-kinase/protein kinase B/eNOS signaling pathways in vessel walls and its direct effects on cardiomyocytes via β1-adrenergic and ryanodine receptors and provided data on myocardial infarction and heart failure. Vascular smooth muscle senescence could be explained by the modulation of growth factors, matrix metalloproteinase-2, and angiotensin II by T. Furthermore, leukocyte trafficking, facilitated by changes in TNF-α, could explain some of the effects of T on atheromatous plaques. Conflicting data on prothrombotic risk linked to platelet aggregation inhibition via NO-triggered arachidonate synthesis or increased aggregability due to enhanced thromboxane A in human platelets provide evidence regarding the hypotheses on plaque maturation and rupture risk. The effects of T on cardiac electrophysiology and oxygen delivery were also reviewed.

Discussion: The effects of TRT on the cardiovascular system are complex. Although molecular studies suggest a potential benefit, several clinical observations reveal neutral or occasionally detrimental effects, mostly due to confounding factors.

Conclusions: Attempts to demonstrate that TRT damages the cardiovascular system via systematic analysis of the putative mechanisms led to the contradiction of the initial hypothesis. Current evidence indicates that TRT is safe once other comorbidities are addressed.

Using the reductio ad absurdum logic, we contradicted the initial assumption of an overall harmful effect of T on the CV system. Although T has been demonstrated to have overall favorable effects on vasomotion, arterial stiffness, atherosclerosis, cardiac electrophysiology, oxygen delivery, cardiac contractility, and remodeling, it possesses a prothrombotic effect due to its action on platelet function and blood viscosity. In summary, based on the current evidence, CV disease does not appear to be increased in patients undergoing TRT.178,179 Most physicians against TRT will argue that TRT is “neutral” in terms of CV safety. While the latter is possible, the indication for TRT has never been to address CV dysfunction but rather to improve various signs and symptoms in LOH that correlate well with low testosterone levels. Nonetheless, in older patients with a known CV risk factor, a tailored approach is suggested.14,25 Symptoms, comorbidities, baseline and target levels of T, formulation, and therapy timing25,180,181 should be considered to improve sexual function, mood, depressive symptoms, and the mobility of patients with low testosterone levels.13,33,182,183 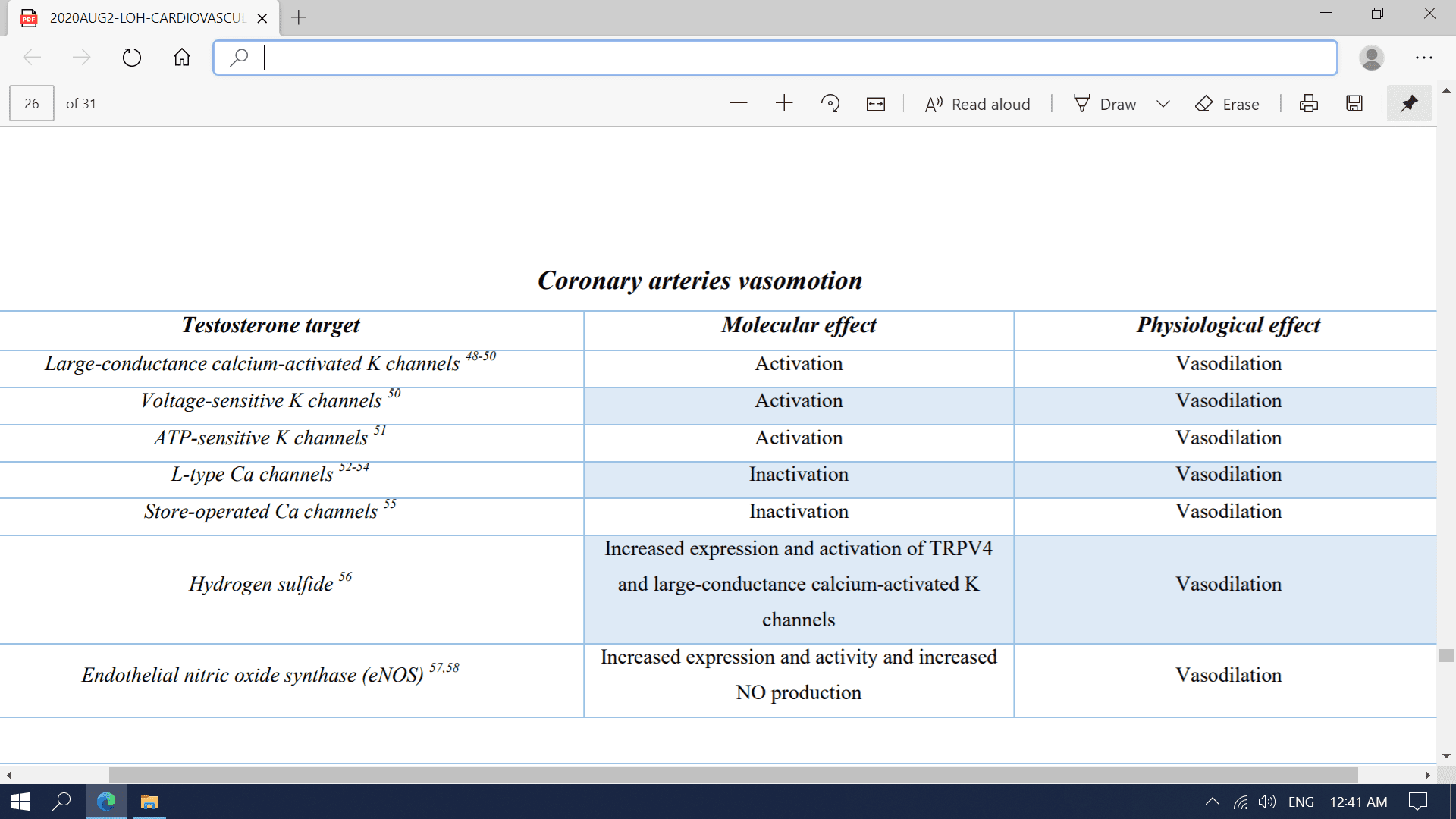 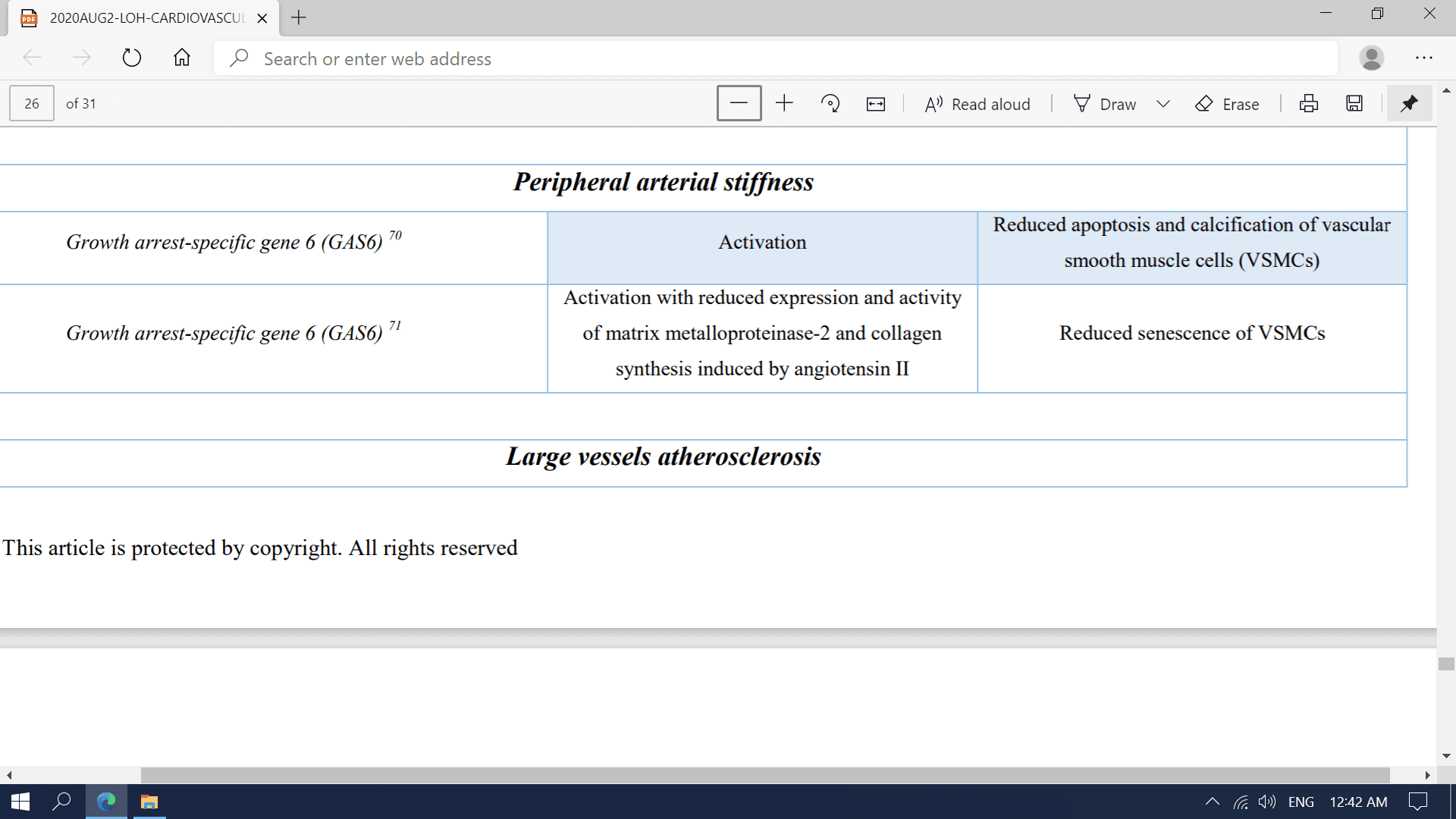 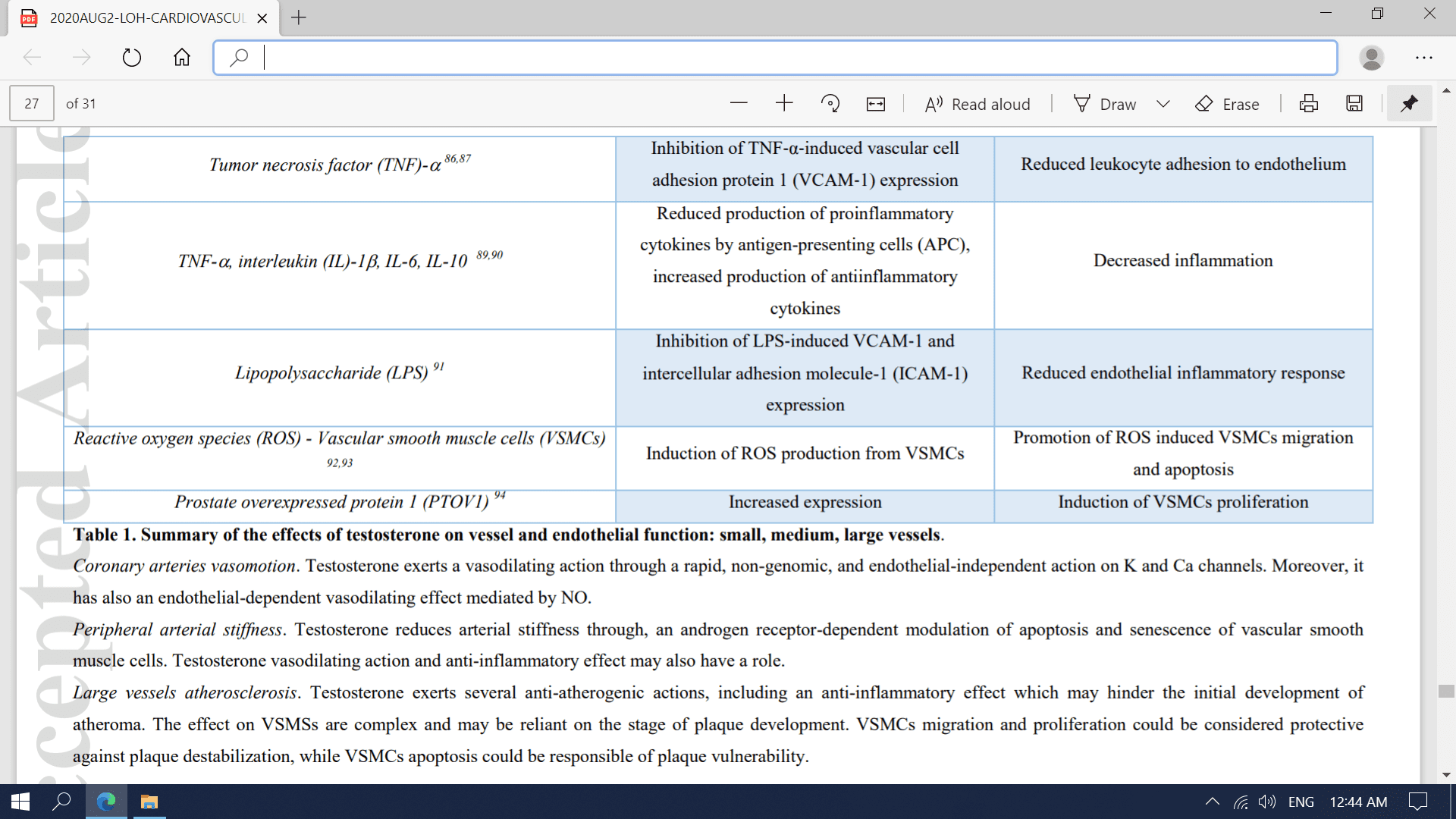 Table 1. Summary of the effects of testosterone on vessel and endothelial function: small, medium, large vessels. Coronary arteries vasomotion. Testosterone exerts a vasodilating action through a rapid, non-genomic, and endothelial-independent action on K and Ca channels. Moreover, it has also an endothelial-dependent vasodilating effect mediated by NO. Peripheral arterial stiffness. Testosterone reduces arterial stiffness through, an androgen receptor-dependent modulation of apoptosis and senescence of vascular smooth muscle cells. Testosterone vasodilating action and anti-inflammatory effects may also have a role. Large vessel atherosclerosis. Testosterone exerts several anti-atherogenic actions, including an anti-inflammatory effect which may hinder the initial development of atheroma. The effect on VSMSs is complex and may be reliant on the stage of plaque development. VSMCs migration and proliferation could be considered protective against plaque destabilization, while VSMCs apoptosis could be responsible for plaque vulnerability 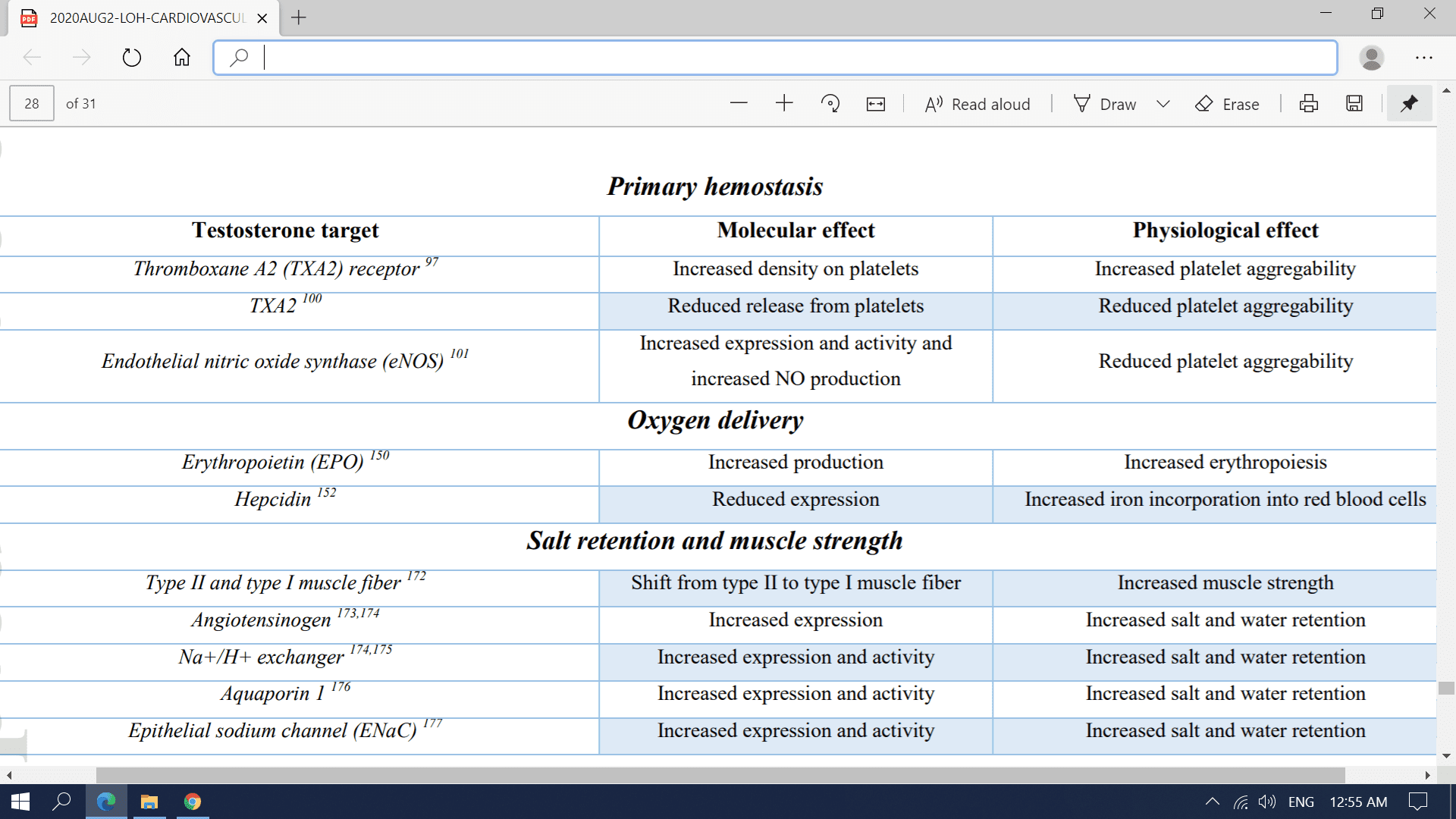 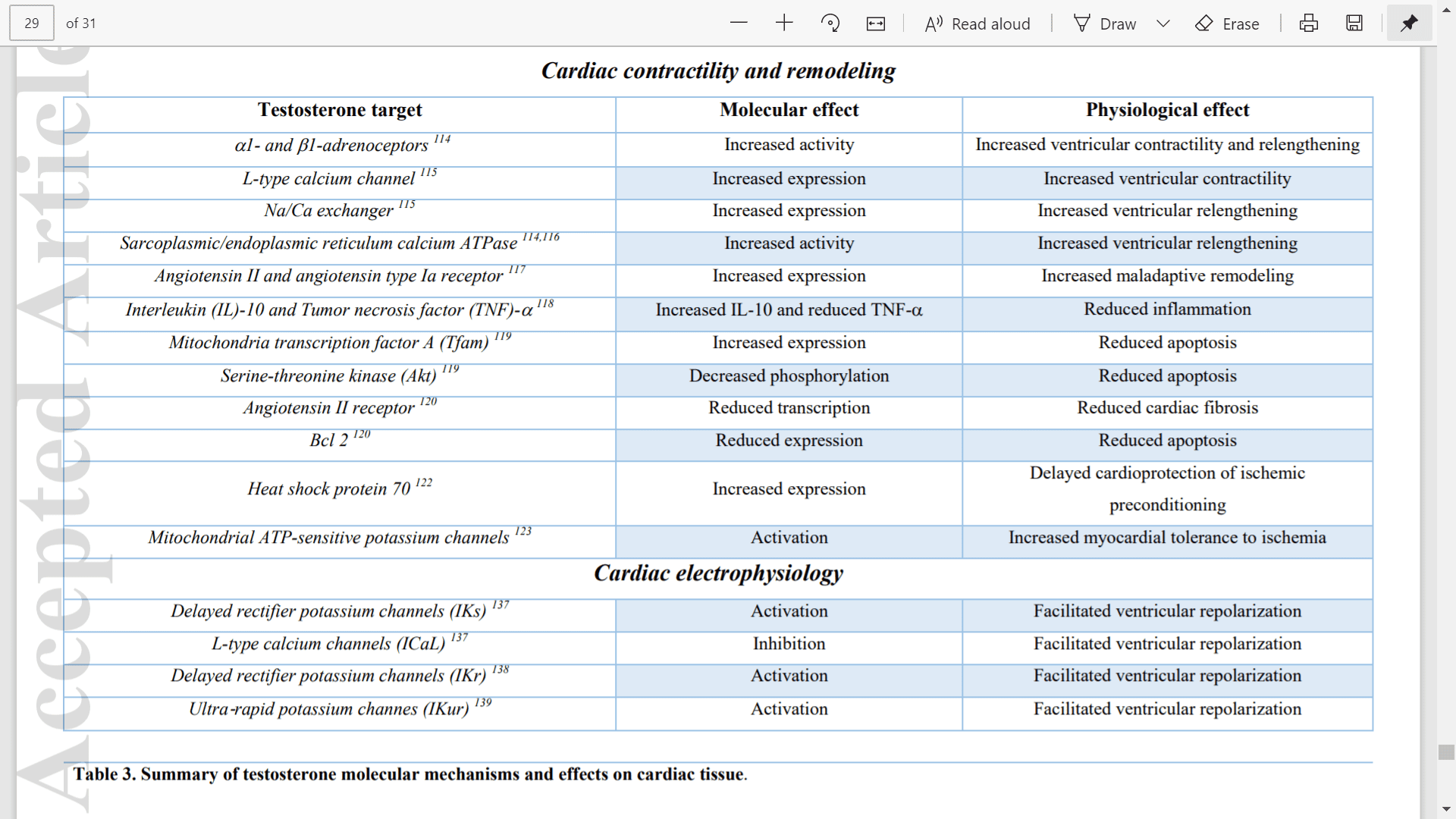 Table 3. Summary of testosterone molecular mechanisms and effects on cardiac tissue. Cardiac contractility and remodeling. Testosterone seems to have an overall favorable effect on ventricular contractility and remodeling, with a protective effect on cardiomyocytes. Cardiac electrophysiology. Testosterone also promotes ventricular repolarization through a direct action on several ion channels involved in the generation of the action potential. 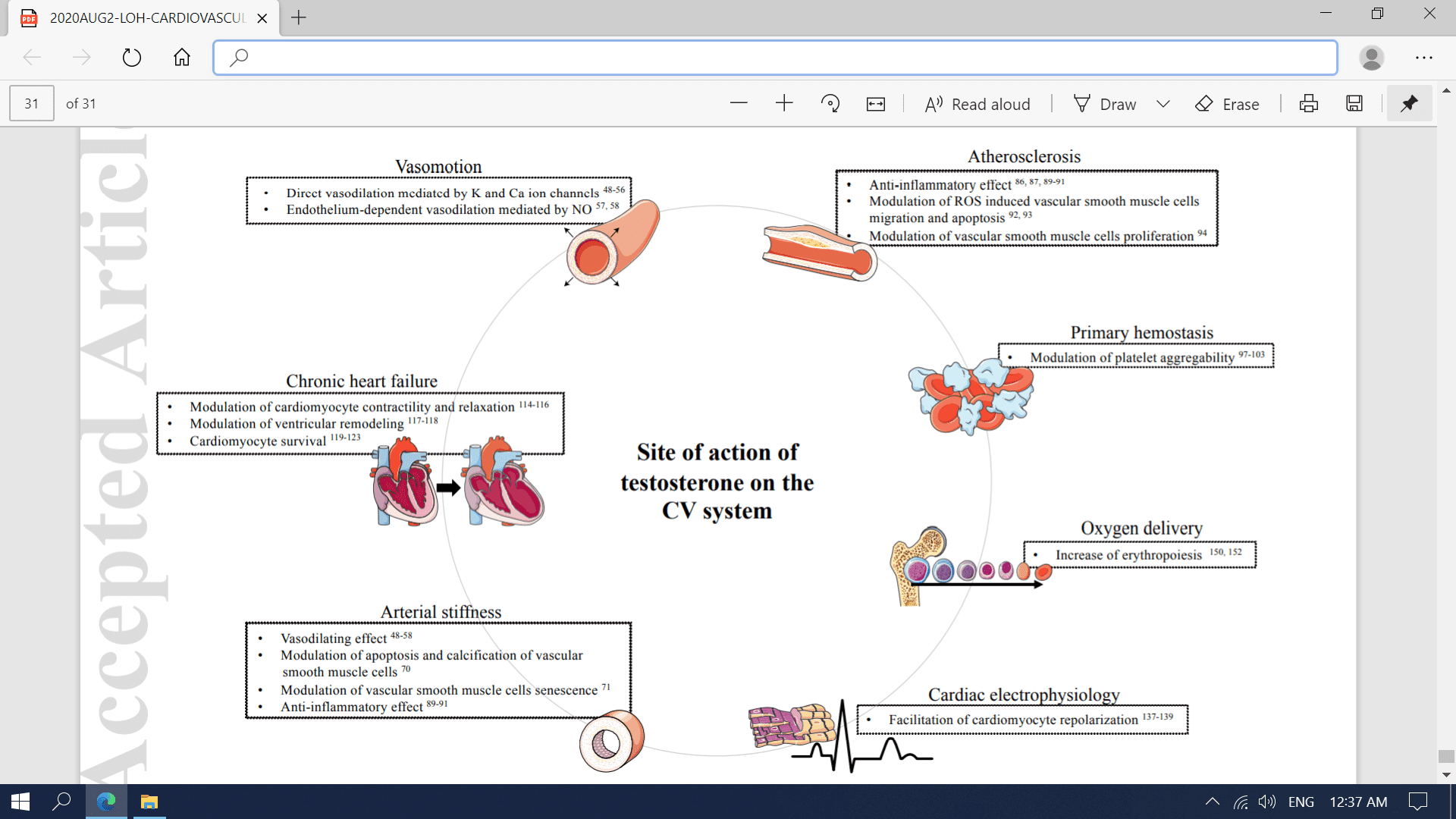