Erectile dysfunction (ED) is defined as the consistent or recurrent inability of a man to attain and/ or maintain a penile erection sufficient for sexual activity and is a common condition worldwide.1 ED has been shown to be associated with a variety of comorbidities that affect both patients’ physical and mental health, including cardiovascular disease, anxiety, and depression.2 The prevalence of ED is expected to increase throughout the world, with some estimates predicting that 322 million men will be affected globally by 2025, a 111% increase from 1995.3 Although there are many therapeutic options available for men with ED, management has changed little since the approval of phosphodiesterase-5 inhibitors (PDE5i) in 1998.4 Approximately, 30% of men do not respond to PDE5i therapy and many others find that these medications cause undesirable side effects.5 As a result, PDE5is have been reported to have discontinuation rates of approximately 4% per month and almost 50% after 1 year.6 In the setting of PDE5i failure, the next steps in management typically involve more invasive therapy, including injections of erectogenic medications and penile prosthesis. Therefore, there is a clear need for new, non-invasive treatment options for men with ED.

Energy-based therapies have been proposed as a novel, nonsurgical, restorative treatment option for ED. A variety of energy sources have been used, most prominently shock waves. Shock waves are a form of acoustic energy that can be targeted and focused on highly specific anatomic regions.7 Shock waves are known to have mechanically disruptive effects, impacts on tissue regeneration, and anti-inflammatory properties. These properties have made shock wave energy of interest for several medical applications.8 Examples of use include the management of nephrolithiasis, in calcific coronary plaque modification, and musculoskeletal regeneration.9–11

The mechanism by which Li-ESWT may improve erectile function remains unclear but is thought to stem at least in part from stimulation of mechanosensors throughout the endothelium in the penile vasculature. This stimulation in turn induces neoangiogenic processes allowing for greater blood flow throughout the corpus cavernosum.15 In addition to neoangiogenesis, rat models of ED have shown that Li-ESWT may induce migration of progenitor cells that can improve microcirculation and contribute to nerve regeneration.16 Li-ESWT has also been thought to contribute to the overall decline in cell stress responses and inflammation in penile tissue, which can further contribute to increased blood flow and smooth muscle relaxation.15 In fact, Lue et al. used a rat model of pelvic neurovascular injuries to demonstrate that LiESWT can induce endogenous progenitor cell recruitment and subsequent Schwann cell activation allowing for angiogenesis along with tissue and nerve regeneration.17 Similar findings have been demonstrated in many other animal models of ED and there have been numerous proposed specific cellular pathways implicated.18 This is of particular interest as Li-ESWT for the management of ED is generally regarded as safe, with few to no reported adverse effects.19

Since Li-ESWT was introduced in 2010, there have been numerous randomized controlled trials (RCTs), as well as meta-analyses evaluating, and in most cases supporting, the efficacy of LiESWT.20–23 Despite this, multiple sexual health organizations and guidelines remain restrictive in their endorsement of this technology, recommending use only in the setting of an institutional review board (IRB)-approved clinical trial.24–26 Nevertheless, interest in this technology for ED remains quite high.27,28

*In this article, we critically analyze the literature to determine which men are most likely to benefit from Li-ESWT for ED and to delineate data necessary to establish whether or not Li-ESWT will be a new standard of care in ED management.29 Most studies of Li-EWT have been conducted on men with vasculogenic ED. Moreover, few if any studies have evaluated the efficacy of Li-ESWT in men with ED related to radical pelvic surgery, neurogenic ED, and diabetes.

Numerous RCTs have demonstrated the efficacy of Li-ESWT in ED treatment. Furthermore, the safety of Li-ESWT has been well-established with none of the RCTs included in recent meta-analyses reporting any significant adverse effects.21,22 Both urologists and patients have also expressed great interest in this novel therapy.27,43 Nevertheless, RCTs that have been conducted have not used consistent treatment protocols and additional studies are required to determine which treatment protocols (in terms of the number of shocks, location of shocks, intervals between treatment, and frequency of treatment sessions) are optimal. It is conceivable that patient factors may modulate treatment response and that there may not be an optimal “one-size-fits-all” approach.

Currently, most of the successful studies on LiESWT in ED treatment have been on men with vasculogenic ED, particularly those who are still responsive to PDE5i. Li-ESWT appears to lack efficacy in men who have undergone pelvic surgery. Other populations, including diabetic men and men who have had a renal transplant, have been incompletely evaluated as to the efficacy of LiESWT for ED. Therefore, additional studies in carefully categorized populations are necessary to properly evaluate what populations may best benefit from Li-ESWT.

It is also crucial to assess the long-term efficacy of Li-ESWT to determine how it may best be incorporated into ED treatment. The short follow-up duration of most current RCTs, as well as the small number of men recruited, creates a disadvantage in determining who would best benefit from LiESWT and how it can be optimally incorporated into treatment plans.

Overall, despite the growing evidence of efficacy, these limitations have led major urologic and sexual health societies to restrict Li-ESWT as an experimental treatment.24,26 Table 1 summarizes the limitations of the RCTs evaluating the use of Li-ESWT in ED treatment.

*Appropriately powered RCTs with longer follow-up durations, homogenous treatment protocols, and diverse patient populations are required to determine the role of Li-ESWT in ED management. Until such data become available, clinicians should use Li-ESWT only in the context of appropriate patient counseling and safety protocols. 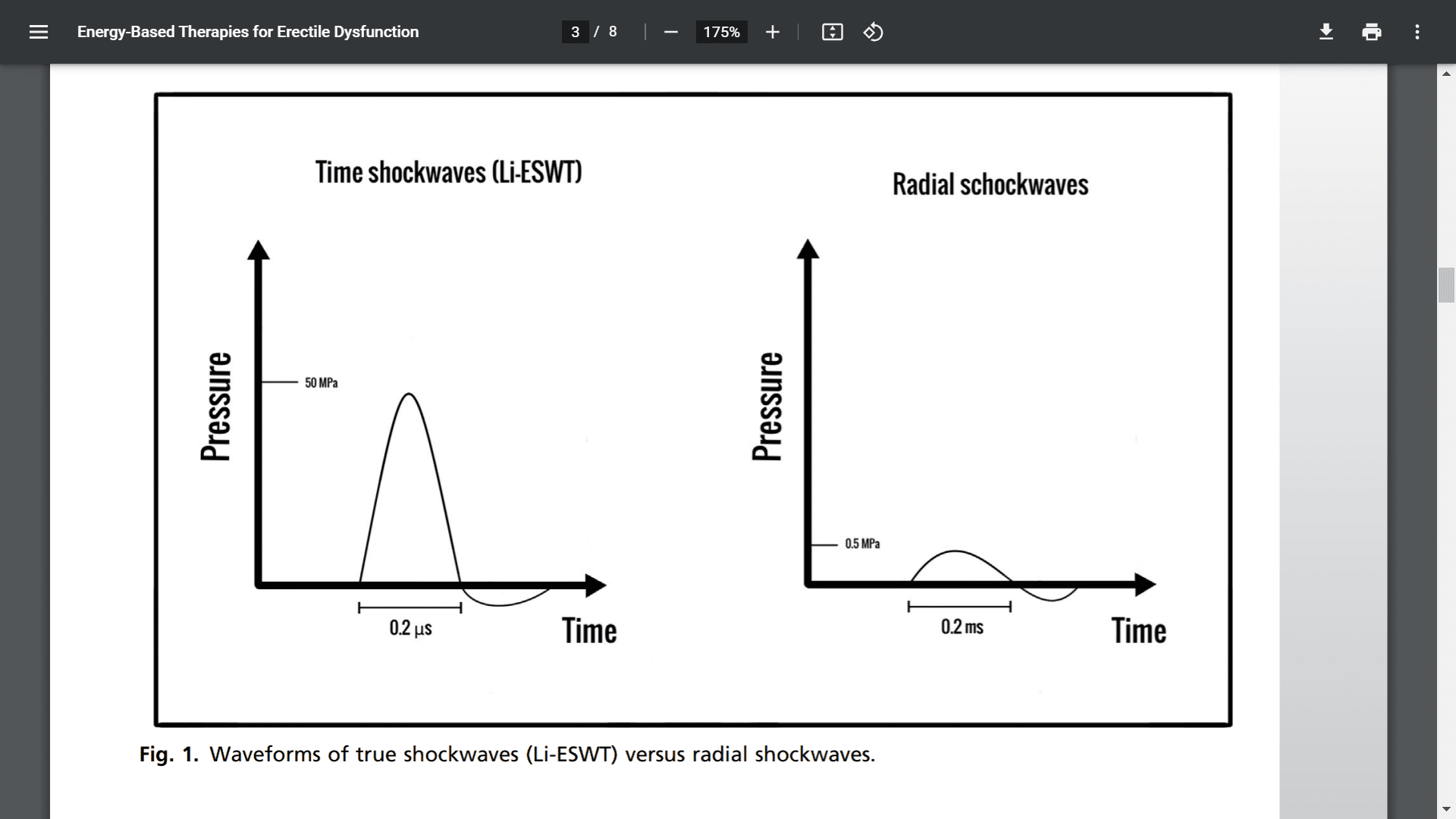 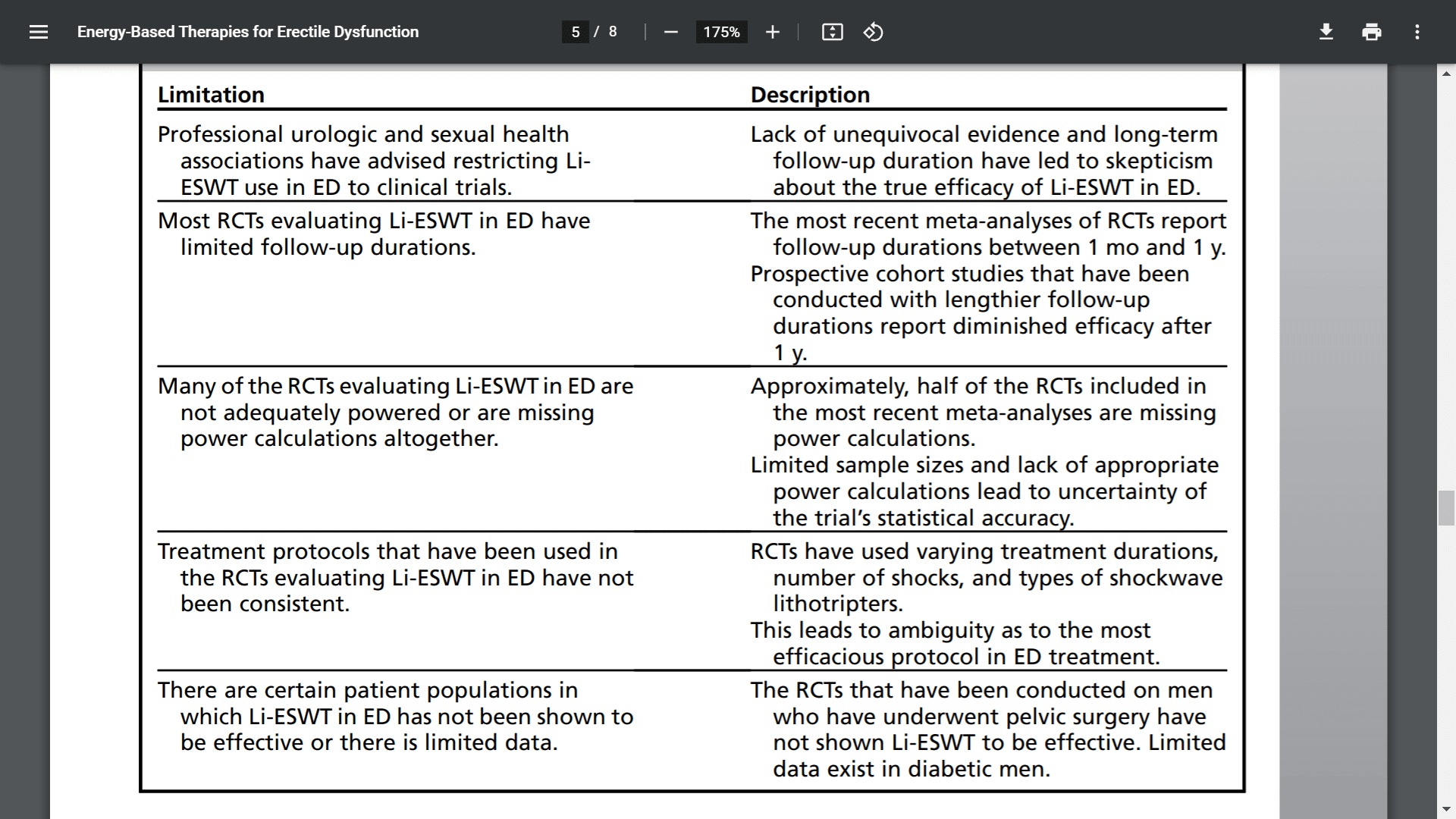 *The bulk of data on Li-ESWT for ED has been focused on short-term efficacy in PDE5i responders, a population in which there is evidence for substantial efficacy

*Future studies to expand the prime-time use of Li-ESWT in ED will need to focus on conducting additional RCTs with more diverse patient populations, longer follow-up durations, and larger sample sizes

*A growing body of data supports shock wave therapy as a safe and effective treatment modality for erectile dysfunction (ED), particularly in men who are responders to phosphodiesterase-5 inhibitor (PDE5i) therapy

Use of LIESWT and LIPUS Shock Wave Therapy to Treat ED