Effect of exogenous testosterone on spermatogenesis

Sperm production starts from puberty in the seminiferous tubules providing testosterone production by the Leydig cells that take place in the interstice of the testicles. Normal spermatogenesis depends on specific signaling from the hypothalamic-pituitary-gonadal axis. GnRH, FSH, and LH are the main hormones involved in the production and maturation of spermatozoa. Exogenous administration of androgens influences the hypothalamic-pituitary-gonadal axis with negative feedback that may lead to a partial or complete cessation of spermatogenesis by decreasing FSH and LH.

Despite the fact that many trials have confirmed that exogenous testosterone affects male fertility status, evidence regarding the long-term effects of treatment is conflicting. Regarding this aspect, many studies have confirmed a return to baseline sperm concentration after testosterone treatment discontinuation; however, none of them can specify how long recovery will take or whether the sperm count is sufficient for fertility.

Recently, the great relevance of testosterone replacement therapy and its side effects on spermatogenesis has been observed. This is not surprising as younger men seeking treatment for hypogonadism are growing and 12.4% of all testosterone prescriptions are given to men <39 years old. Such a population is obviously interested in fertility and there should be a clear understanding of whether this aspect may be impaired. In the present chapter, we analyze the effect of exogenous testosterone on spermatogenesis.

The testicle is either an endocrine and exocrine gland responsible for the production of male sex hormones (androgens) and the secretion of spermatozoa. Sperm production starts from puberty, whereas testosterone secretion begins earlier during embryonic development. It is well established that androgens (testosterone and dihydrotestosterone) are responsible for the development of the entire genital tract as well as the external genitalia.

The testis is functionally compartmentalized. While the production of androgens occurs in the interstice by the Leydig cells, spermatogenesis takes place in the seminiferous tubules. Despite the separate endocrine and exocrine roles, normal testicular physiology results from the integrated function between the two compartments.

Spermatogenesis is a complex process of differentiation and maturation of the germline cells, which leads to the formation of the spermatozoon starting from the spermatogonium [1]. The complete maturation process lasts 74 days. Normal spermatogenesis depends on specific signaling from the hypothalamic-pituitary-gonadal axis and its regulation occurs via hormonal, paracrine, and autocrine signaling [2]. Under the influence of neuropeptides (i.e. kisspeptin, noradrenaline, and leptin with stimulatory effects, and prolactin, dopamine, serotonin, c-aminobutyric acid (GABA), and interleukin 1 being inhibitory), the arcuate nucleus and preoptic area in the hypothalamus secrete gonadotropin-releasing hormones (GnRH) in a pulsatile manner, thereby activating the hypothalamushypophysis-testicle axis. GnRH is a short peptide hormone directly secreted into the hypophyseal circulation by neuronal endings and binding to GnRH receptors. It is located in the pituitary gonadotrope cells in the anterior part of the hypophysis [3]. GnRH secretion is low in childhood and becomes pulsatile during puberty. The pulsatile activity of GnRH is the key to normal reproductive functioning as it determines follicle-stimulating hormone (FSH) and luteinizing hormone (LH) secretions [4-7]. In particular, the differences in the pulsatile release of GnRH lead to the secretion of a specific gonadotrophin with LH synthesis being induced by fast GnRH pulses (>1 pulse per hour) and FSH by slower pulse frequencies (<1 pulse per 2–3 hours) [8]. In the testis, LH and FSH sustain intratesticular testosterone production and regulate spermatogenesis. Pituitary gonadotropins bind to specific membrane receptors on target cells and stimulate the secretion of steroid-based sex hormones (androgens and estrogens) and/or protein factors (inhibins and activins). Luteinizing hormone (LH) stimulates Leydig cells in the testis to produce testosterone, and insulin‑like growth factor 1 (IGF-1) [9]. On the contrary, FSH stimulates Sertoli cells in order to maintain high levels of intratesticular testosterone, essential to support spermatogonial differentiation and maturation. Normal intratesticular testosterone levels are 50 to 100 times higher than serum concentration [10-11]. Sertoli cells also produce an androgen-binding protein (sex hormone-binding globulin [SHBG]) and the aromatase enzyme CYP19 which converts testosterone into estradiol, inhibins A and B [12]. A negative feedback mechanism controlled by endogenous testosterone levels is responsible for the decrease of hypothalamic GnRH secretion and gonadotropin release. FSH is also negatively regulated by inhibin B. Indeed, testosterone inhibits GnRH and LH, whereas inhibin B regulates FSH.

Testosterone is the most important circulating androgen. It plays a central role in the development of male reproductive tissues, which are secondary sexual characteristics. It also has an essential reproductive function in establishing and maintaining the male phenotype. Testosterone is secreted by the Leydig cells, provided that adequate stimulation by gonadotropins is maintained [13].


*To date, no conflicting evidence exists on the mid-long term recovery following testosterone therapy. Although many studies have confirmed the return to baseline sperm concentration after treatment discontinuation, none of them have specified how long recovery will take nor whether the sperm is sufficient for fertility. In addition, it appears that the longer the TRT lasts, the slower the recovery is.

In a large multivariate analysis [26], Liu et al., established that hormonal male contraceptive regimens are reversible within a predictable time course. In particular, it was discovered that median times for sperm to recover to thresholds of 20, 10, and 3 million were 3.4, 3.0, and 2.5 months, respectively. Perhaps the most striking data of the study was that sperm concentration reached a minimum of 20 million at 24 months in all patients [30]. In a literature review, Crosnoe et al. observed that the recovery of spermatogenesis after discontinuation of exogenous testosterone was generally promising and that most men returned to normal sperm production within 1 year [27]. In a survey of U.S. urologists, Ko et al., [28] observed that approximately 25% of patients using exogenous testosterone returned to normal sperm production within 1 year after discontinuing testosterone supplementation. Human chorionic gonadotropin (hCG) and selective estrogen receptor modulators (SERMs) are effective in restoring spermatogenesis alone or in combination [29-32]. On the one hand, the efficacy of hCG is attributed to its structural similarity to LH while, on the other hand, SERMs potentiate spermatogenesis by inhibiting negative feedback of estrogens. In their study, Hsieh et al. showed that the protective effect of low-dose HCG appeared to be independent of the testosterone formulation administered [33]. Indeed no differences in semen parameters were found between the transdermal and injectable groups. In fact, a total of 26 men were included in the study, with a follow-up of 6.2 months. Nineteen men were treated with injectable testosterone and 7 were treated with transdermal gel, while all men received intramuscular HCG (500 IU) every other day. None of the patients became azoospermic during concomitant administration of testosterone replacement and human chorionic gonadotropin therapy.

The use of testosterone therapy has become increasingly common over the last few years. More testosterone is being prescribed, and most of these prescriptions are for middle-aged men. Exogenous testosterone decreases sperm production and has detrimental effects on male fertility. However, after discontinuing testosterone supplementation, most of the studies indicate that men return to normal sperm production within 1 year, but it may be delayed and/or incomplete. In any case, testosterone has negative, potentially serious long-term effects on the reproductive system and the general health of users. Many more studies are necessary to better understand the physiological mechanisms that regulate the interactions of testosterone on spermatogenesis, especially those concerning the recovery after the discontinuation of the treatment. 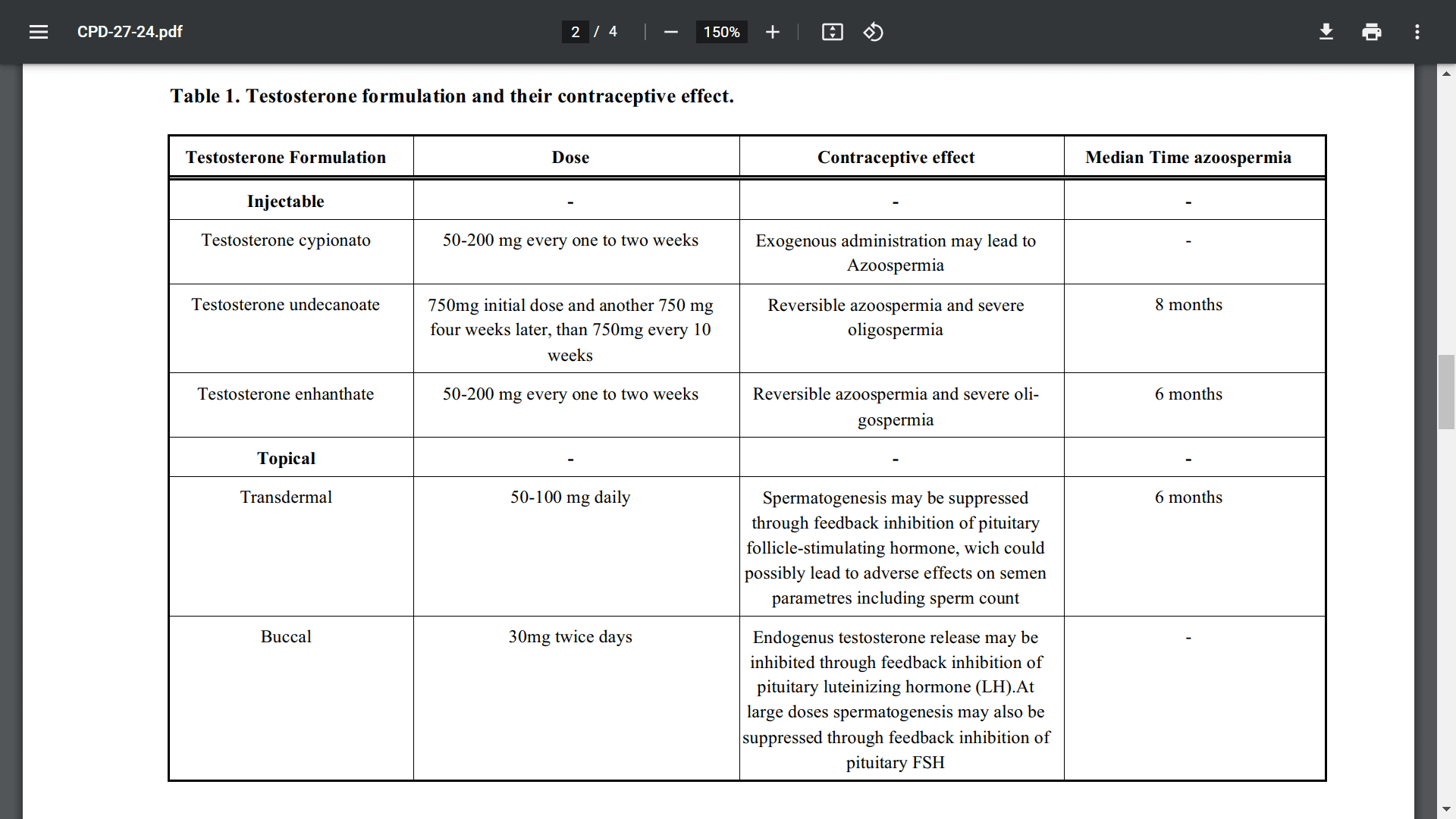