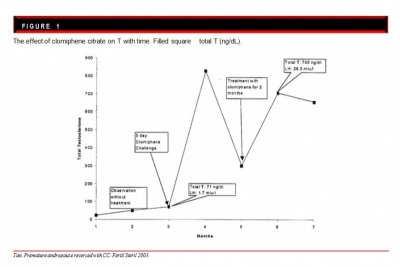 Objective: To report a case of symptomatic hypogonadism induced by the abuse of multiple steroid preparations that was subsequently reversed by clomiphene.

Conclusion(s): Clomiphene citrate is used typically in helping to restore fertility in females. This represents
the first case report of the successful use of clomiphene to restore T levels and the pituitary-gonadal axis in
a male patient. The axis was previously shut off with multiple anabolic steroid abuse. (Fertil Steril 2003;79:
203-5. ©2003 by American Society for Reproductive Medicine.)

Clomiphene citrate is an orally administered, nonsteroidal
ovulatory drug typically used in female infertility manage-
ment. It has both estrogenic and antiestrogenic properties.
Clomiphene citrate initiates a series of endocrinologic events
that cause a gonadotropin surge, which in turn causes an
increase in steroidogenesis. Clomiphene citrate is thought
not to have any inherent androgenic or anti-androgenic ef-
fect. In this case, we were challenging the pituitary gland to
produce a surge of gonadotropins to help restore function to
the Leydig cells to produce T.

Clomiphene citrate has been shown to increase T levels in
both normal and impotent hypogonadal men probably re-
flecting the primacy of estrogen over T in the feedback
regulation of male gonadal function. In a small, double-
blind, placebo-controlled, crossover study of clomiphene
against placebo in impotent men with secondary hypogonad-
ism, there was a significant rise of LH, FSH, and T with
clomiphene (2). However, the study in these 17 men did not
reveal any improvement of sexual function as measured with
questionnaires and penile tumescence and rigidity testing.
Another study investigated the hormonal response to clomi-
phene in alcoholics with hypogonadism (3) and found that
clomiphene can increase androgens and estrogens. The rise
in estrogens was thought to be due to peripheral conversion
of androgens to estrogens. Paradoxically, one study failed to
show that clomiphene could restore pituitary testicular re-
sponsiveness in hypogonadotrophic hypogonadism but suc-
ceeded with human chorionic gonadotropin (4).
Clomiphene citrate has been used successfully in the
treatment of idiopathic hypogonadotrophic hypogonadism
induced by excessive exercise such as marathon running (5).
In that case report, reestablishment of the physiologic hypo-
thalamic-pituitary-gonadal axis with the return of normal T
and gonadal function was achieved with clomiphene citrate
(50 mg, 2 times per day) over 5 months. In our case, the
reestablishment of eugonadal status was achieved with just a
short challenge of clomiphene citrate 100 mg over 2 weeks,
but the patient relapsed. He needed a longer course of 2
months of clomiphene citrate to maintain eugonadal status.
Both cases, including ours, suggest that early intervention
with clomiphene can restore the hypothalamic-pituitary-
gonadal axis. We are still continuing to follow up our patient
to establish long-term effects. The patient did not suffer from
any hot flashes or other side effects from clomiphene citrate.
There have been no previously documented cases of
clomiphene citrate improving exogenous steroid-induced
testicular failure. The mechanism of initial testicular failure
could be due to the suppression of LH due to the use of
exogenous steroids, which in turn leads to decreased T
levels. We postulate that clomiphene citrate can reestablish
the axis even after steroid abuse has initially shut down the
axis. It can induce the gonadotropin surge, initiate T levels to
increase, and improve gonadal function and reverse symp-
toms. This was possible in this case as the patient was
relatively young and presumably had a more elastic axis.

Wow, reading this post really interests me. This seems like something that could be an option for me given that I am young age and dealing with secondary hypogonadism, that should be caused by previous steroid use.

Would you recommend showing this study to an endo to see if they are willing to start me on something like this? 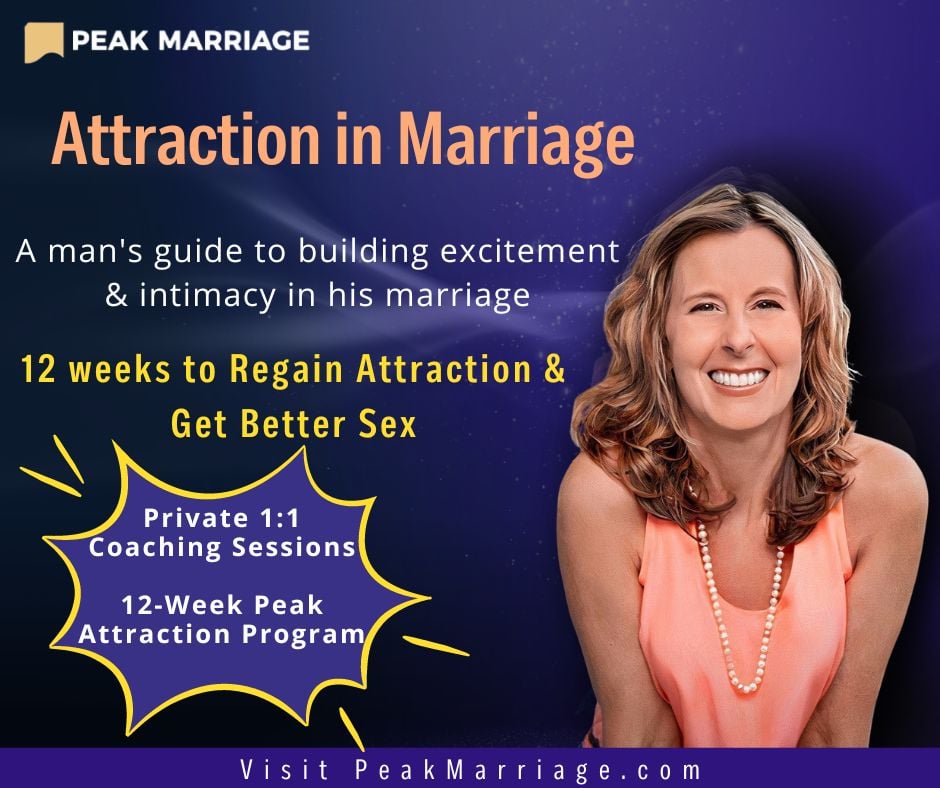