Objective To evaluate total testosterone (TT) kinetics and its predictors 6 months after the discontinuation of clomiphene citrate (CC) in patients with hypogonadism.

Materials and methods Consecutive patients with normal testicles and male hypogonadism defined by TT<300 ng/dl in the presence of signs or symptoms according to the previous consensus were prospectively evaluated in a urologic outpatient clinic by TT levels at baseline (T0), after a daily dose of 50 mg CC for 40 days (T1), and after the washout period of 6 months of CC discontinuation (T2).

Conclusions CC is a compelling option to treat male hypogonadism, although a chronic treatment is needed in most patients. About one in every four patients respond to a CC short trial to "reboot" the physiology. Further understanding of TT kinetics in these patients in the long term is warranted.

Male hypogonadism (MH) is defined by the American Urological Association (AUA) as total testosterone (TT) level of less than 300 ng/dl in the presence of signs or symptoms, such as decreased energy, decreased libido, depressed mood decreased muscle mass, and increased body fat [1, 2].

The incidence of testosterone deficiency ranges widely between 2 and 13%, with an estimated 0.8–1.6% yearly decline in total testosterone in middle-aged men. Furthermore, it is estimated that 40% of men aged>45 years are hypogonadal [3].

Historically, the mainstay for its treatment is exogenous testosterone, although leading to the downregulation of luteinizing hormone (LH) and follicle-stimulating hormone (FSH) with suppression of the hypothalamic-pituitary–testis (HPT) axis and spermatogenesis [1]. Estradiol (E) provides similar negative feedback to the hypothalamus leading to decreased gonadotropin release, low T, and impaired spermatogenesis [4, 5].

Clomiphene citrate (CC) is a selective estrogen receptor modulator (SERM) that increases gonadotropin levels by inhibiting the negative feedback from the estrogen on the hypothalamic-pituitary-gonadal axis [2]. CC is primarily an estrogen receptor antagonist at the hypothalamus and pituitary, thus preventing the negative feedback exerted by E on these sites. Blockade of this negative feedback stimulates gonadotropin release from the pituitary, promoting spermatogenesis and endogenous TT production in the testis through stimulation of Sertoli and Leydig cells. Via these mechanisms, the label use of CC can treat the symptoms of hypogonadism and low TT in men while preserving or improving semen parameters. CC can be administered orally and is even less costly than testosterone replacement therapy [5].

Data about CC treatment for hypogonadism is still scarce, especially regarding the kinetics of TT levels and the potential recovery of the HPT axis after treatment discontinuation. Human chorionic gonadotropin (hCG) remains the only FDA-approved non-testosterone treatment option for male testosterone deficiency, though expensive and requiring intramuscular injections [1].

The main study focus is on the potential for the normal endogenous testosterone control restoration after CC support discontinuation, avoiding the burden of exogenous testosterone use, i.e., the adverse impact of usual supra-physiological testosterone levels, spermatogenesis inhibition. These are innovative and important aspects of the current study considering the literature limitations on CC treatment duration in hypogonadal men.

*We hypothesized that a subgroup of patients might sustain TT levels 6 months after the discontinuation of CC treatment.

After screening to exclude the use of medications that may interfere with the production or action of testosterone and other treatable causes by the measure of serum LH, prolactin, and thyroid profile, 75 consecutive patients with MH, defined according to previous consensus definition—symptoms with total testosterone level less than 300 ng/dl and normal and symmetric testis were prospectively evaluated in a urologic outpatient clinic by total testosterone levels quantification at baseline (T0), after a daily dose of 50 mg CC for 40 days (T1), and after the washout period of 6 months CC discontinuation (T2). Total testosterone levels>300 ng/dl, 450–600 ng/dl and>600 ng/dl according to the AUA recommendation were evaluated [1, 6, 7].

Considering that patients at T1 refer to the responder’s profile, we classified them into five percentile ranges (10th, 25th, 50th, 75th, and 90th percentile) and distributed the values of the three above-mentioned Deltas for each percentile, to identify different CC response pattern.

Shapiro–Wilk test was performed for the sample distribution test. For median comparison, the Friedman test was used for paired samples. A post hoc test was done to identify the difference between each group, comparing T0 × T1; T1 × T2; T0 × T2. We used the Wilcoxon signed-rank test with correction for Bonferroni.

Table 3 shows the medians of testosterone level variations (Deltas) of all patients for each percentile at T1 (10th, 25th, 50th, 75th, and 90th percentile).

It is noted that for all percentiles at T1 there is a significant increase after CC administration (Delta T1 − T0), showing a pattern of the proportional increase in testosterone over the percentiles. This agreement between T1 and Delta T1 − T0 demonstrates the presence of a poor responder pattern, located below the 25th percentile (<469.5 ng/dl), and a good responder’s pattern, above the 75th percentile (>717.2 ng/dl).

Regarding testosterone maintenance levels after washout (Delta T2 − T0), we noticed that despite showing the same response pattern seen above, there is a significant difference only above the 90th percentile, inferring those patients who had a T1 response greater than 810 ng/dl have testosterone maintenance with a median gain of 166.5 ng/dl at 6 months of CC discontinuation (Table 3).

No patient had to discontinue CC and no complication was reported in the studied patients.

The aim in TT levels for CC varies in the literature. Using a less stringent definition of 300 ng/dl or greater testosterone, Krzastek found a 93% response to CC in men treated for up to 3 years. That matched the percentage shown in our 40-day study. The same goes for a serum testosterone level of 450 ng/dl or higher, as a recommended parameter in the AUA guidelines, reported in 80% of our subjects and 81% in Krzastek's [10]. These data agree with other reports showing that CC is efficacious in a high proportion of selected patients, and has the advantages of not blocking the HPT axis, not affecting fertility, and all with lower costs [3, 10].

*The main objective of our study was to elucidate which percentage of MH reversed by a 40-day CC treatment can sustain physiological TT levels in the midterm since scarce studies analyzed the kinetics of TT after stopping CC treatment.

Devoto and Aravena reported contrasting results in a subgroup of patients with functional hypogonadotropic hypogonadism who respond to CC therapy by maintaining normal TT levels 6 months after ending treatment [12]. Our study partially agreed with their data; 18 patients (24%) maintained asymptomatic and with TT levels over 300 ng/dl after 6 months of stopping the treatment, against the 12/16 (75%) of Devoto. This conflict could be due to the study draw since they just analyzed the patients who responded to a 10-day trial with CC and used a 6-month CC therapy. We hypothesize that MH is a chronic irreversible condition in most cases, but in a selected group of patients, which Devoto and Aravena call mild hypothalamic dysfunction, a trial with CC could reboot the HPT axis.

On behalf of drug safety and side effects, a long-term follow-up cohort demonstrates that CC is an oral therapy with durable efficacy and a favorable side effect profile in the long term up to 7 years. Only 36 men (9%) reported side effects in that cohort, the most common side effects were consistent with those reported in prescribing information. However, patients and providers should also be aware of the progressive need to monitor for symptoms of hyperestrogenemia while on sustained CC therapy [10].

Molecular studies show that CC is composed of two very different isomers, enclomiphene (EC), the trans-isomer (62%), and zuclomiphene, the cis-isomer (38%)—with potentially opposing effects. The first isomer has an estrogen antagonist effect, by preventing estrogen receptor-mediated negative feedback at the level of the pituitary and hypothalamus, while zuclomiphene acts as an estrogen agonist [13]. The trans-isomer is a very promising drug for MH, appearing to be responsible for the desired anti-estrogen effect of CC, offering significant elevations in T levels [11, 14].

This could result in the correction of testosterone levels and hypogonadal symptoms without suppressing spermatogenesis. In addition to the benefits mentioned above, enclomiphene lacks the estrogen receptor agonist activity seen with clomiphene citrate caused by the cisisomer zuclomiphene, which accumulates in the body and can take more than 6 months to be eliminated after discontinuation of treatment. This may mitigate some of the estrogenic side effects that some men can present and increase the potential beneficial effects [14, 15]. Unfortunately, due to the difficulty inherent in getting a new molecular entity approved by the FDA, the future of enclomiphene looks bleak at best [16].


*Our study has some limitations worth discussing. About 40% of the subjects initially screened did not finish the follow-up and were excluded, of whom 40% kept symptomatic and 60% elected to change to testosterone therapy; however, this represents the real-life challenges that must be accounted for.


Based on current results, one in every four hypogonadal men with normal testicles may respond to a short trial of CC to "reboot" the HPT axis, with the potential for physiology maintenance, avoiding chronic treatment. Responders tend to be younger patients. Baseline gonadotropins were not strong predictors of CC treatment response in hypogonadal men [2], thus not evaluated in our study.

A recent meta-analysis comprising 17 studies (four randomized controlled trials), with a total of 1279 patients has shown significant hormones, semen, and symptoms improvement in hypogonadal men during CC treatment, with<10% adverse events reported (none serious) [17]; however, more extensive prospective trials are needed to understand further the durability of the hormonal response to CC with time.

While little is known about CC’s effect on the intercellular signaling and testicular microenvironment, it modulates the inhibitory retro-control of steroids by interfering with ER in diverse targets, mainly the pituitary gland (LH, FSH production), preoptic area (libido), and the Leydig cell (testosterone production), recreating a balance between LH, FSH, T, and estrogen [18].

CC is a compelling option to treat male hypogonadism, although a chronic treatment is needed in most patients. About one in every four patients respond to a CC short trial to "reboot" the HPT axis physiology. Further understanding of TT kinetics in these patients in the long term is warranted. 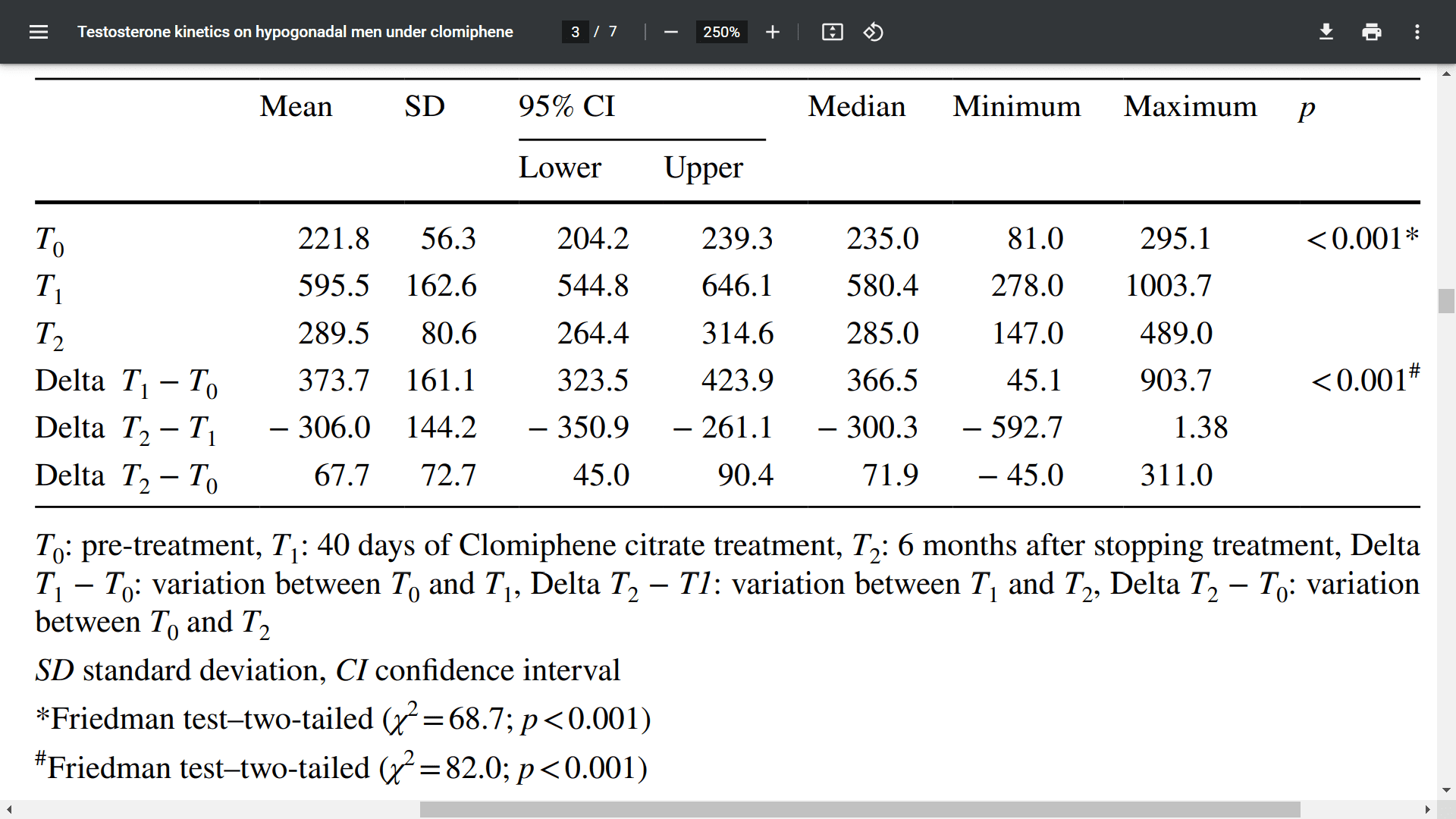 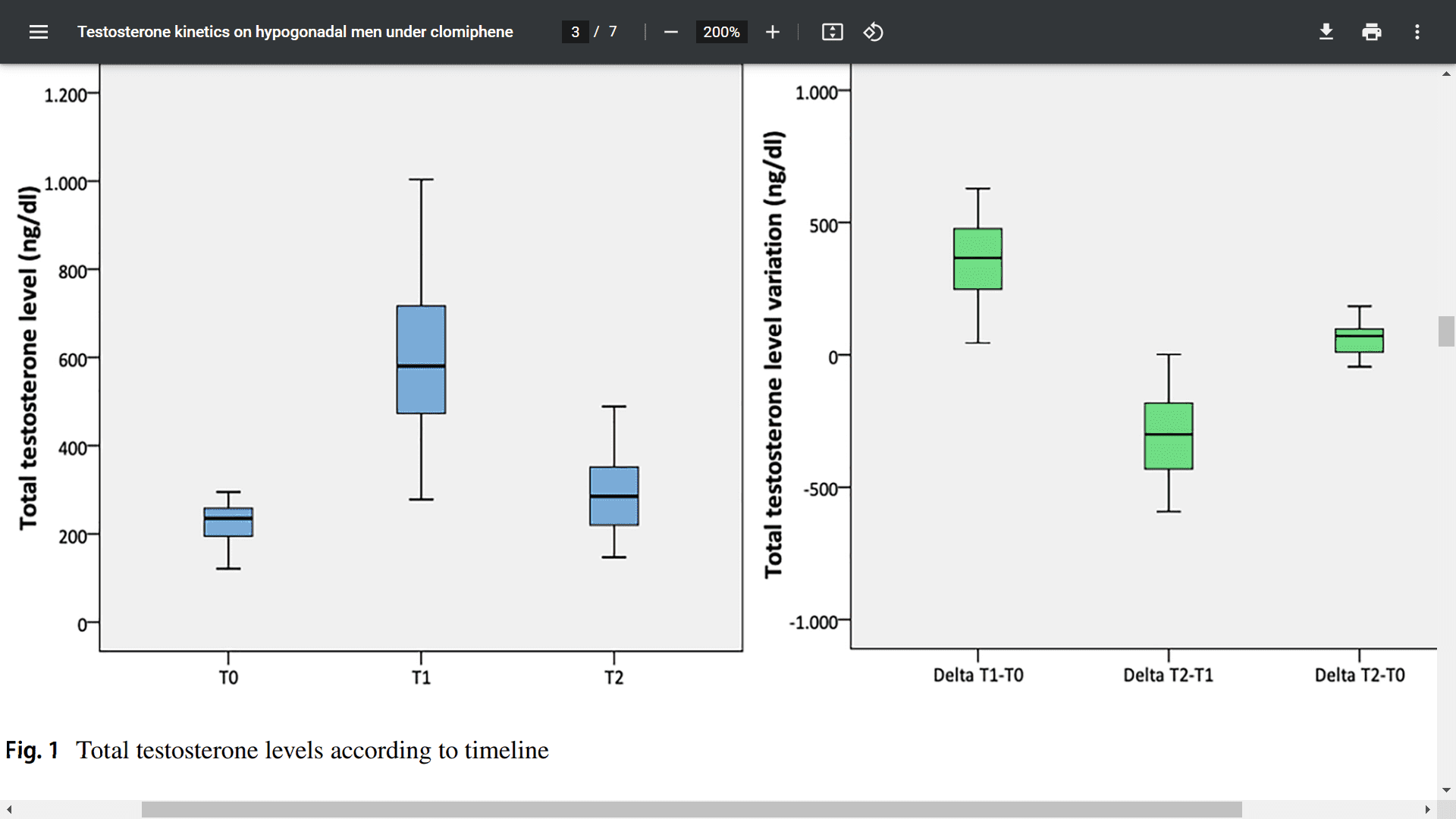 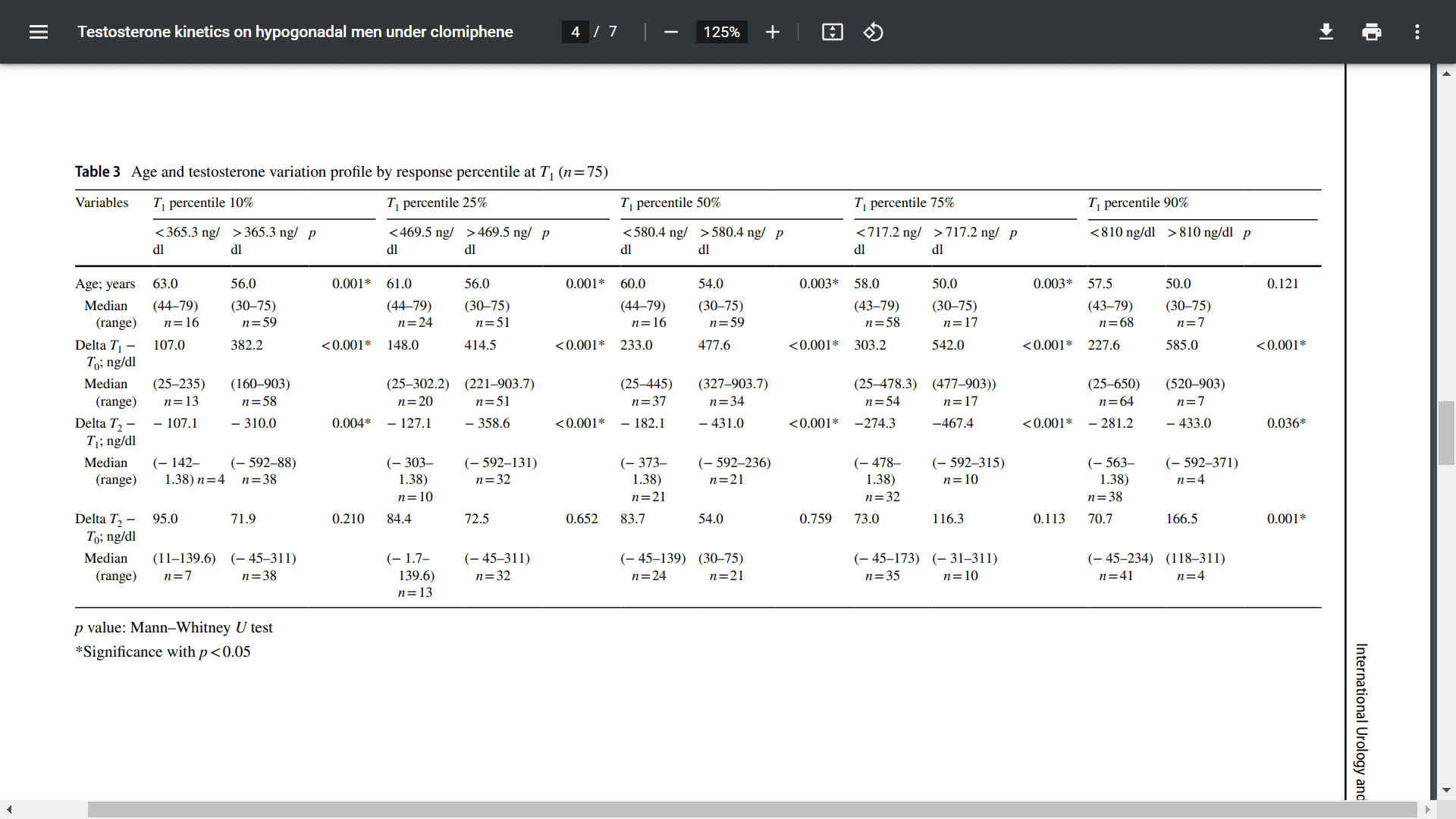 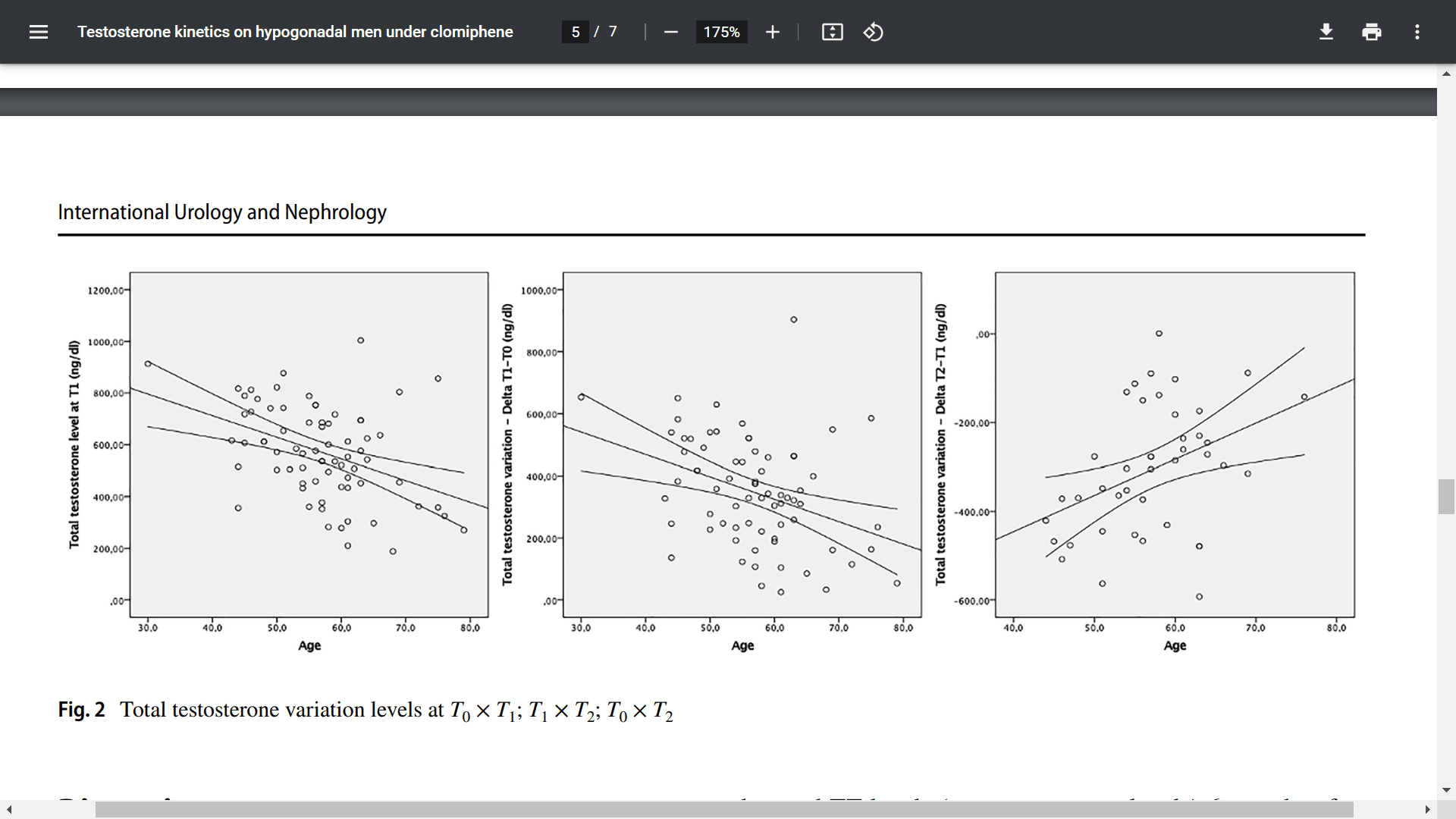