Application of BOTOX in Female Sexual and Genitourinary Dysfunction

Introduction: The past 2 decades have witnessed an increased amount of research into botulinum neurotoxin (BoNT) as a treatment for various forms of sexual dysfunction and pain syndromes refractory to other medical therapy. BoNT is postulated to reduce pain sensation by inhibiting neuropeptide release in the presynaptic neuron. Dyspareunia, vaginismus, vestibulodynia, and persistent genital arousal disorder are female sexual dysfunctions with cryptic pathophysiology and limited treatment options. BoNT has emerged as a potential treatment for many of these afflictions in women.

Objectives: To review the literature regarding BoNT as a treatment for female sexual and genitourinary dysfunction.

Methods: A PubMed search for English-language articles was performed using the following terms: “Botox,” “botulinum toxin,” “botulinum toxin A,” “Onabotulinum A,” “Abobutlinum A,” “BoNT,” and “BoNT-A.” The main outcomes measured by each study were the resolution of dysfunction. This entailed a reduction of pain with intercourse for dyspareunia, reduction of pain for vestibulodynia, decreased arousal for persistent genital arousal disorder, and ability to tolerate penetration for vaginismus.

Conclusion: There is growing evidence suggesting that BoNT is a safe and efficacious treatment option for female patients suffering from various sexual and genitourinary disorders. However, more research is needed to develop a better understanding of the mechanisms through which BoNT treats these disorders.

Until recently, female sexual disorders have been poorly defined with many having overlapping definitions. Furthermore, much of the terminology used within the literature was based on clinician preference thus making it difficult to study the specific pathologies of each disorder or identify efficacious treatment options. Over the past 2 decades, groups like the International Society for the Study of Vulvovaginal Disease and the International Society for the Study of Women’s Sexual Health (ISSWSH) have made great strides in defining and distinguishing many of these disorders.1 Some of the more common disorders include genito-pelvic pain/penetration disorders like vaginismus and dyspareunia, or pain disorders not specifically related to penetration, that is vulvodynia. These disorders affect around 10-20% of women, and while research into treatment has increased, many women have symptoms refractory to conventional therapy.2-4 Botulinum neurotoxin (BoNT) has been gaining interest as a treatment option for these patients with refractory disease.

BoNT is a toxin produced by several bacteria in the Clostridia family. It was first isolated in the late 1800s when researchers identified it as the cause of paralysis in botulism syndrome. Since then, 7 different types of BoNT (BoNT-A to BoNT-G) have been identified.5 These BoNTs are produced as a 150 kDa polypeptide sequence that is cleaved into a heavy chain and a light chain, which remain associated through noncovalent protein interactions and disulfide bridges (Figure 1). The heavy chain binds to the membrane of peripheral nerve terminals and causes endocytosis. The light chain is a zinc-dependent endopeptidase that prevents the nerve terminal from releasing acetylcholine.6 Exocytosis of acetylcholine at the nerve terminal requires soluble N-ethylmaleimide (SNARE) proteins; 3 specific SNARE proteins are syntaxin, synaptosomal-associated protein25 kDa (SNAP-25), and vesicle-associated membrane protein. The BoNT light chain prevents acetylcholine release by cleaving one of these 3 SNARE proteins. Without functional SNARE proteins, the nerve is unable to induce muscle contraction, and the patient experiences flaccid muscle paralysis. Table 1 shows which SNARE protein is cleaved by each subtype of BoNT.5 It is through this mechanism that BoNT has been used medically and cosmetically to treat conditions such as dystonia and strabismus.

Over the last 2 decades, researchers have discovered an additional mechanism through which BoNT acts to reduce neuropathic pain. In the same way that BoNT can prevent exocytosis of acetylcholine at the nerve terminal, it is hypothesized that it can prevent exocytosis of sensory neuropeptides such as Substance P, calcitonin gene-related peptide (CGRP), and transient receptor potential cation channel subfamily V member 1 (TRPV1).7 In addition, BoNT-A deactivates sodium channels and can be used to normalize hyperexcitability in peripheral sensory neurons.8 These findings encouraged scientists to study the effect of BoNT in neuropathic pain conditions like neuralgia (trigeminal, postsurgical, occipital), postherpetic pain, diabetic neuropathy, and carpal tunnel syndrome. BoNT quickly gained popularity as a potential treatment option for refractory conditions and offered new hope for many patients suffering from rarer sexual conditions that are caused by cryptic pathophysiologies. We focus on available research evaluating BoNT as a treatment in female sexual disorders, specifically, dyspareunia, vaginismus, chronic pelvic pain, vestibulodynia, and persistent genital arousal disorder (PGAD).

*Vaginismus
Vaginismus describes a psychological (anxiety or fear of pain) and/or physical (muscle spasm, pain) disorder in which the patient is unable to allow penetration to the vagina, including tampons, fingers, a penis, vaginal dilators, or gynecological exams, despite having the desire to do so.22

*Vestibulodynia
The ISSWSH definition of vulvodynia is vulvar pain without a clear identifiable cause, which lasts at least 3 months. Descriptors for the disorder include localized, generalized, or mixed; provoked, spontaneous, or mixed; and different temporal patterns (intermittent, constant, immediate, delayed, etc.).1

The last 2 decades have seen a rapid rise in publications examining the use of BoNT as a treatment for female sexual disorders. BoNT is postulated to treat dyspareunia, vestibulodynia, and PGAD by inhibiting the release of inflammatory neuropeptides, that is, CGRP and substance P. vaginismus is generally treatable with physical therapy and dilation, but some patients have persistent refractory disease. By inhibiting acetylcholine release at the neuromuscular junction, BoNT may treat refractory vaginismus by reducing resting muscle tone. More research must be done to elucidate the exact mechanism through which BoNT acts in each of these disorders. In addition, randomized controlled trials need to be performed to determine the efficacy of BoNT. Until then, off-label BoNT offers a safe, potentially efficacious treatment option for these suffering female patients and provides hope for living a normal life.

Figure 1. Botulinum neurotoxin consists of a heavy chain that allows endocytosis into the presynaptic nerve terminal and a light chain that has enzymatic activity. Figure 1 is available in color online at www.smr.jsexmed.org. 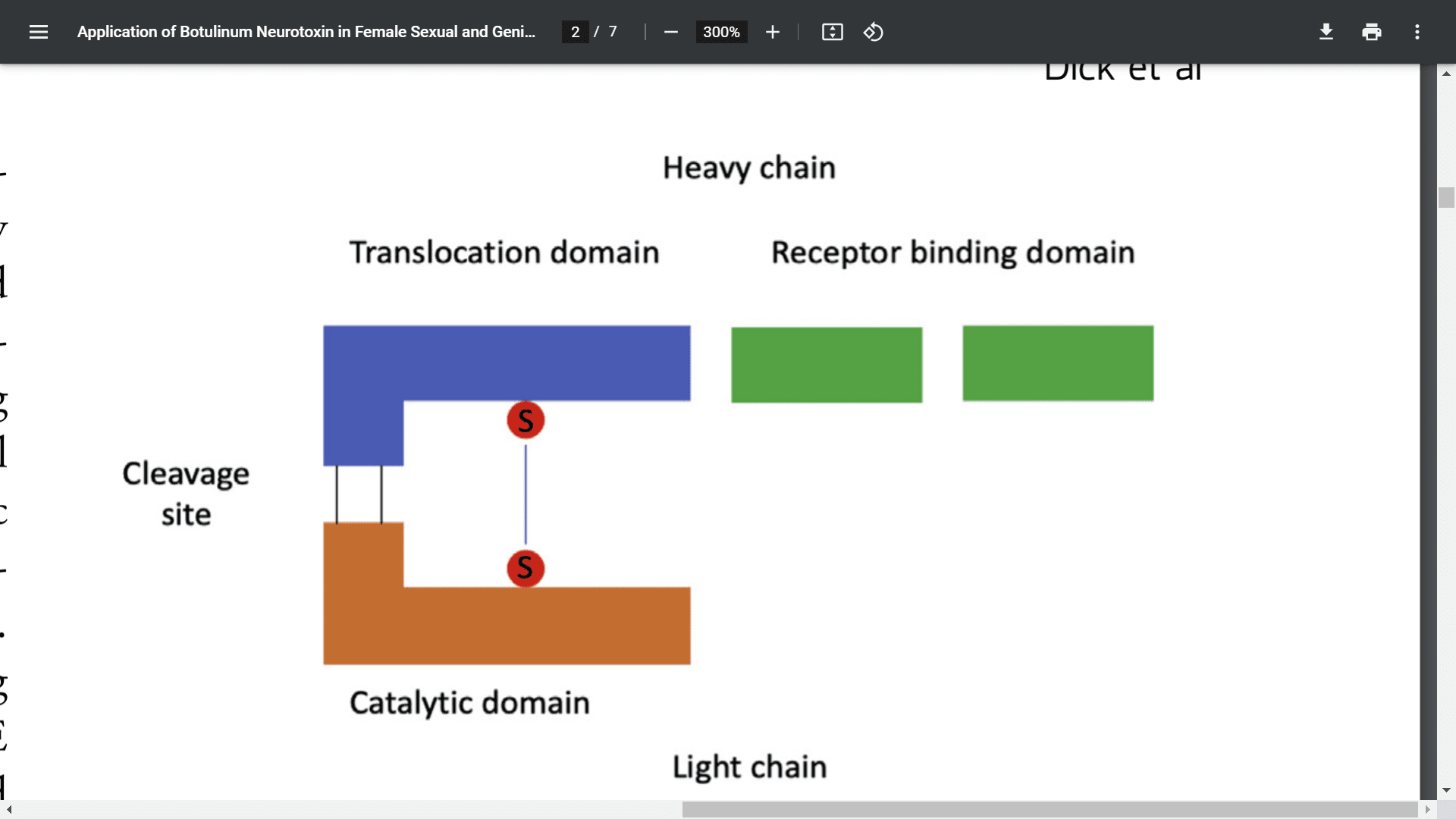 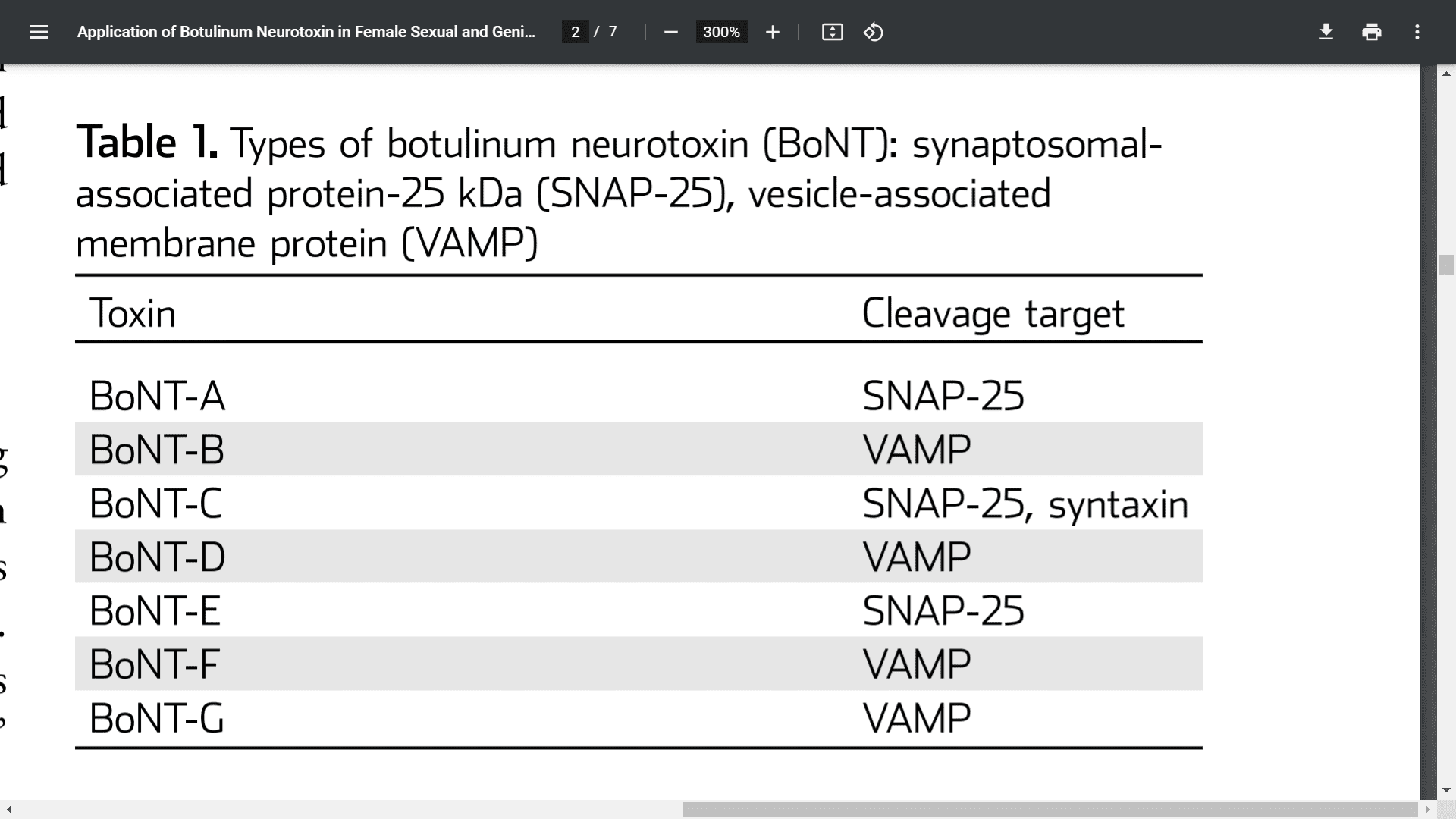 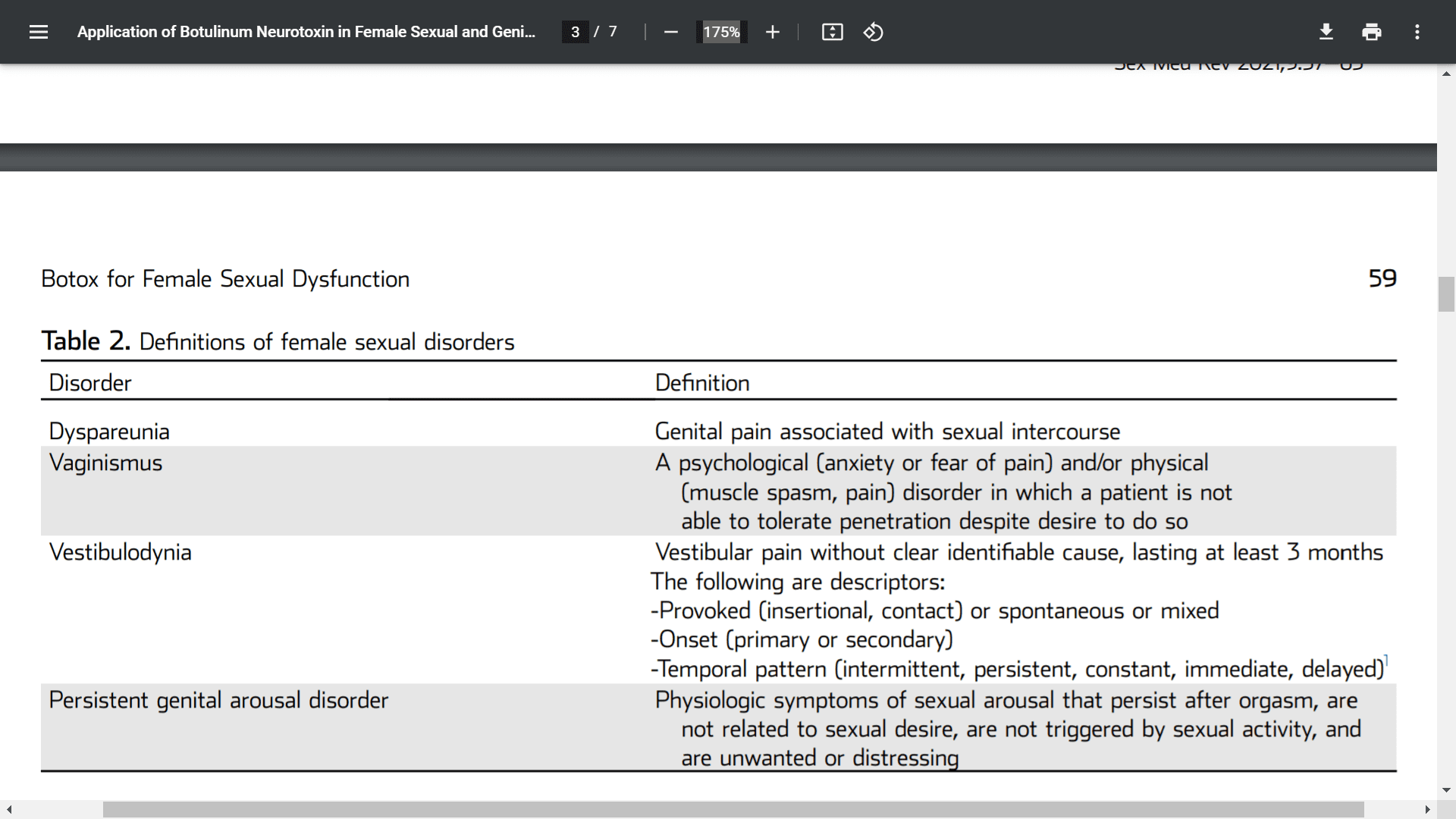 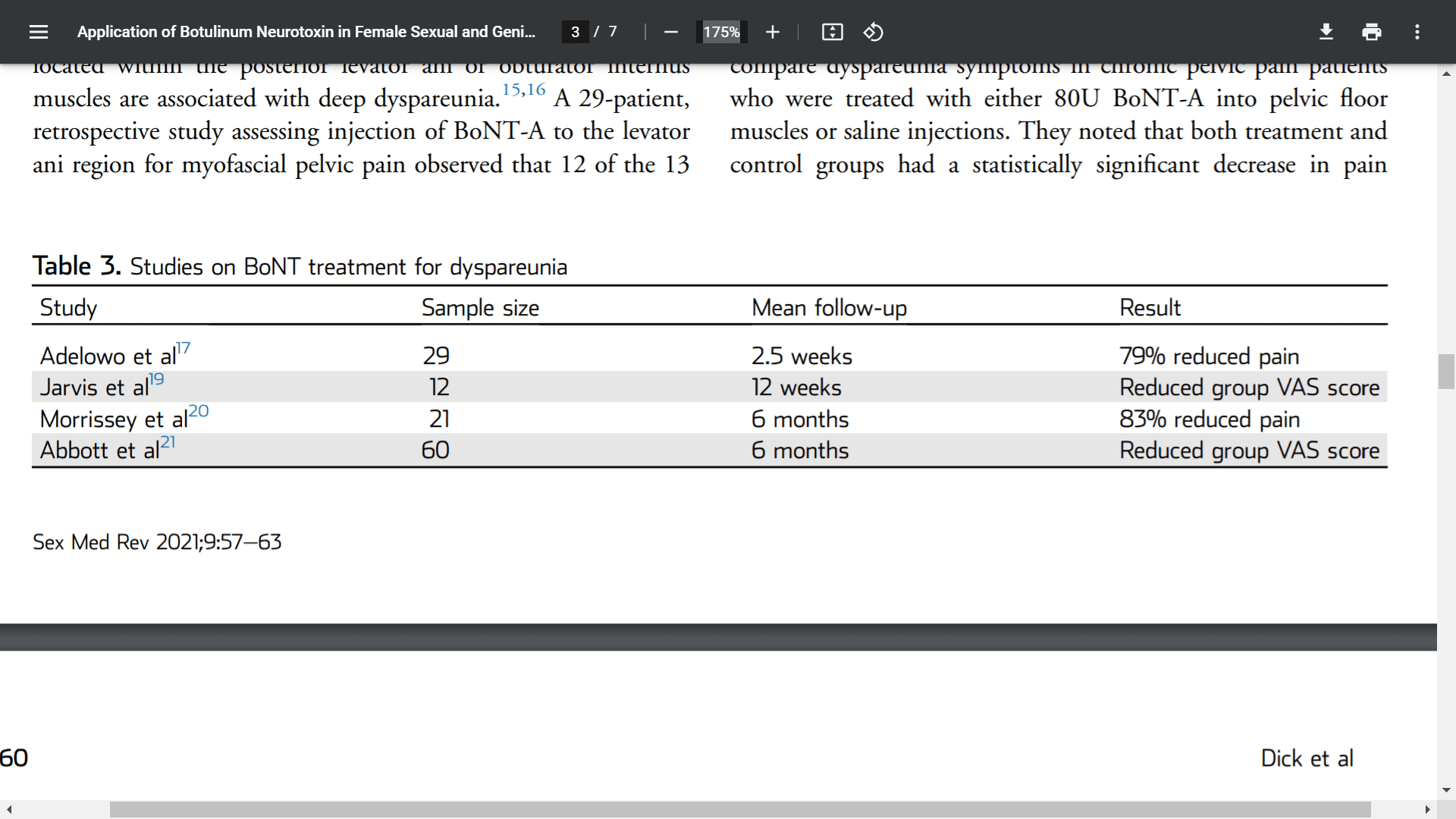 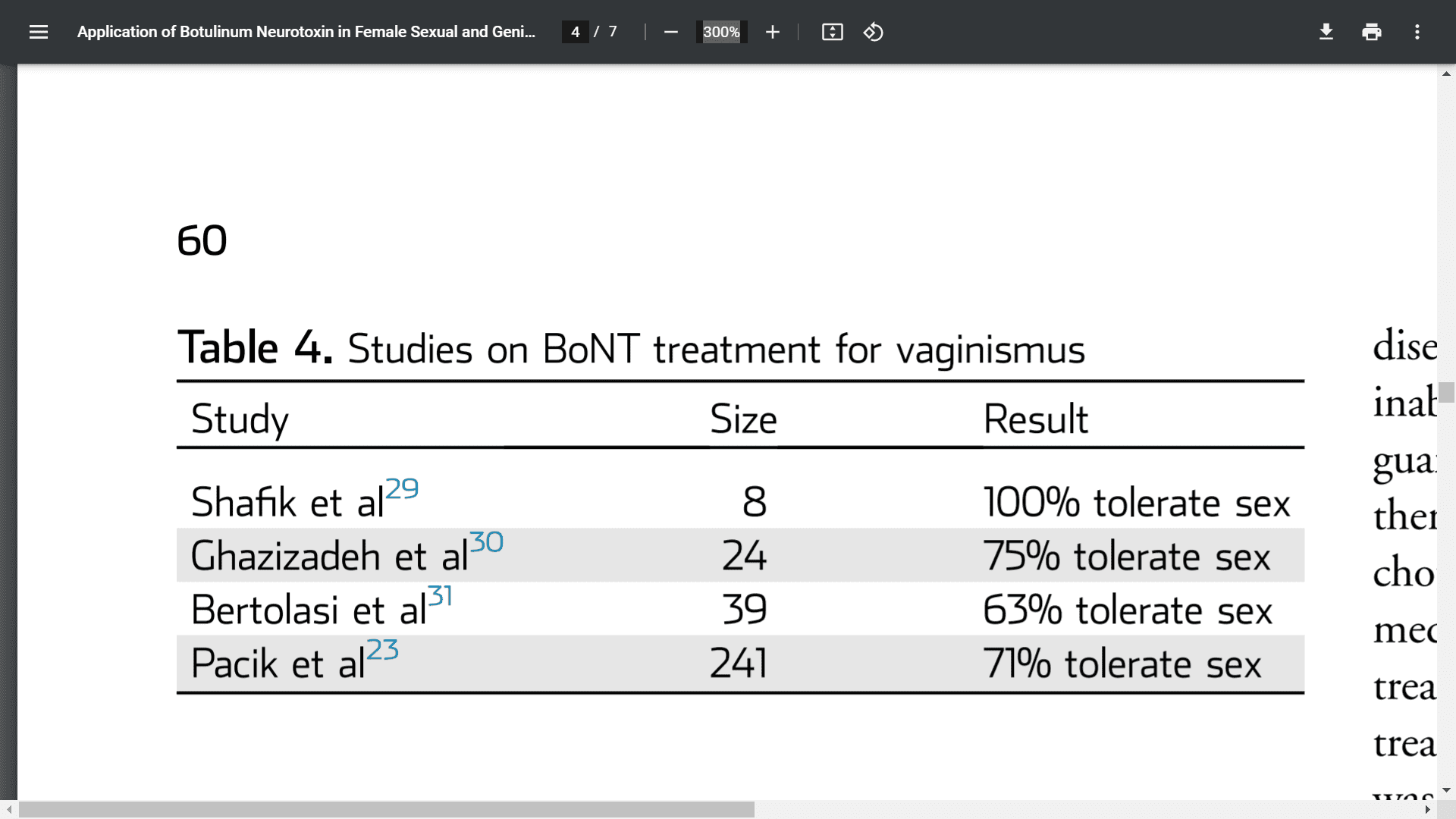 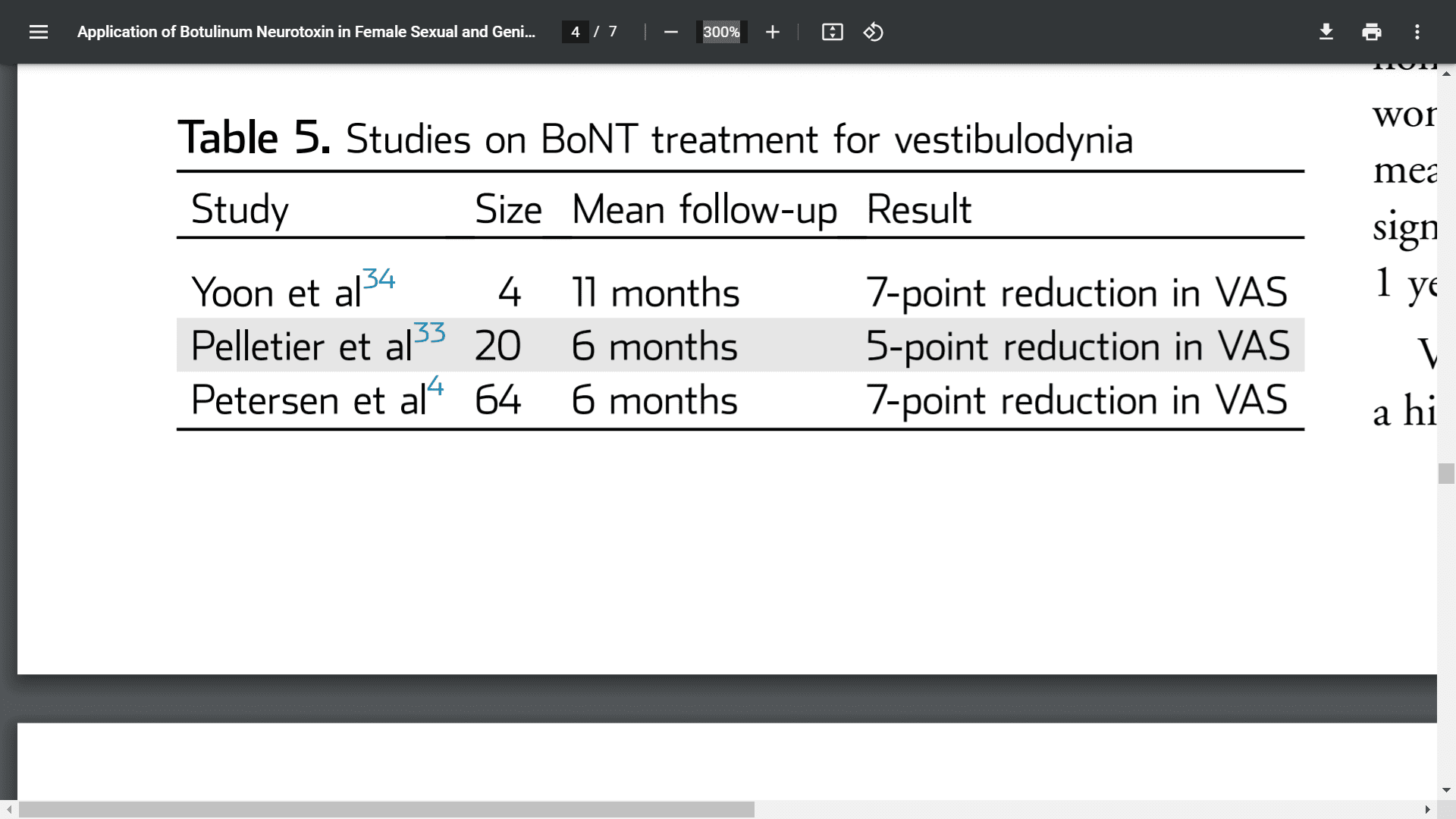