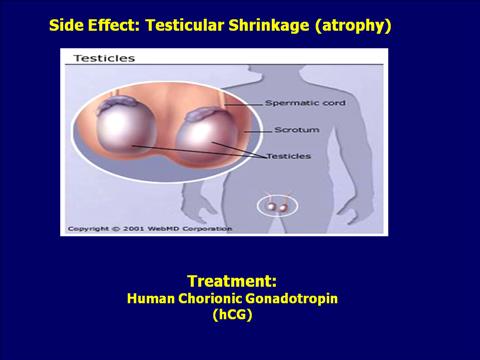 Human chorionic gonadotropin (HCG) (not to be confused with human growth hormone, or HGH) is a glycoprotein hormone that mimics LH (luteinizing hormone), produced in pregnancy by the developing embryo soon after conception, and later by part of the placenta. Its role is to prevent the disintegration of the corpus luteum of the ovary and to maintain the progesterone production critical for pregnancy in women. It supports the normal development of an egg in a woman’s ovary, and stimulates the release of the egg during ovulation. HCG is used to cause ovulation and to treat infertility in women.

You’re probably asking yourself why you should care about this. But in men, HCG is also used in young boys when their testicles have not dropped down into the scrotum normally. Additionally, HCG is used to increase testicular size after long-term testosterone or anabolic steroid use.

Testosterone replacement therapy triggers the hypothalamus to shut down its production of GnRH (gonadotropin releasing hormone). Without GnRH, the pituitary gland stops releasing LH. Without LH the testes (testicles or gonads) shut down their production of testosterone. For males HCG closely resembles LH. If the testicles have shrunken after long-term testosterone use, they will likely begin to enlarge and start their testosterone production shortly after HCG therapy is instituted. HCG jump-starts your testes to produce testosterone and to increase their size.

HCG has also been shown to increase the amount of testosterone inside the testicles (Intratesticular testosterone or IT). The use of HCG alone to increase testosterone is not as popular as using testosterone replacement due to several factors: 1- cost since large doses of HCG would be required, 2- quality of life of HCG alone vs TRT may be worse (this has not been validated by comparison studies), 3- concerns about long term high dose HCG use and its potential effect on desensitization of Leydig cells to it.