Hormonal Treatments for Major Depressive Disorder: State of the Art

Major depressive disorder is a common psychiatric disorder associated with marked suffering, morbidity, mortality, and cost. The World Health Organization projects that by 2030, major depression will be the leading cause of disease burden worldwide. While numerous treatments for major depression exist, many patients do not respond adequately to traditional antidepressants. Thus, more effective treatments for major depression are needed, and targeting certain hormonal systems is a conceptually based approach that has shown promise in the treatment of this disorder. A number of hormones and hormone-manipulating compounds have been evaluated as monotherapies or adjunctive treatments for major depression, with therapeutic actions attributable not only to the modulation of endocrine systems in the periphery but also to the CNS effects of hormones on non-endocrine brain circuitry. The authors describe the physiology of the hypothalamic-pituitary-adrenal (HPA), hypothalamic-pituitary-thyroid (HPT), and hypothalamic-pituitary-gonadal (HPG) axes and review the evidence for selected hormone-based interventions for the treatment of depression in order to provide an update on the state of this field for clinicians and researchers. The review focuses on the HPA axis–based interventions of corticotropin-releasing factor antagonists and the glucocorticoid receptor antagonist mifepristone, the HPT axis– based treatments of thyroid hormones (T3 and T4), and the HPG axis–based treatments of estrogen replacement therapy, the progesterone derivative allopregnanolone, and testosterone. While some treatments have largely failed to translate from preclinical studies, others have shown promising initial results and represent active fields of study in the search for novel effective treatments for major depression.

A long history of clinical experience and preclinical investigation has implicated three major endocrine systems— the HPA, HPT, and HPG axes—in the pathophysiology of mood disturbances and major depression. Since the late 1960s, these observations have prompted clinical trials testing hormones, peptides, and small molecules that target these systems, in an effort to produce novel antidepressants. Although these efforts have resulted in some successes, there have also been a significant number of disappointments and failures to replicate early successes in larger cohorts, for example, with CRFR1 antagonists. Some of these difficulties may relate to the heterogeneous nature of depression and the likely existence of subtypes within the larger clinical construct of major depression. Indeed, older schemas of depression subtypes (e.g., melancholic or psychotic) have been somewhat helpful in identifying populations enriched for HPA axis abnormalities, and the search for more modern ways of subdividing patients (using the Research Domain Criteria, SNPs, inflammatory markers, neuroimaging biotypes, etc.) is an active area of study. Future studies might use features of endocrine alterations to specifically enrich study populations, moving in the direction of personalized medicine. Other special considerations when evaluating these treatments include age and sex. While sex may be an obvious selection criterion for sex-specific disorders (e.g., postpartum depression or PMDD), sex may also influence other hormonal systems and their sensitivity to manipulation. For example, there are some data to suggest that thyroid-based interventions, such as T3 acceleration of TCAs, have greater effects in women, although this hypothesis has not yet been directly tested. Finally, endocrine status is an important factor to consider in patient selection, for example, whether the patient has a primary endocrine syndrome that includes depressed mood, a subclinical endocrine abnormality in the setting of depressed mood, or major depression without primary endocrine disturbances. Depressive symptoms frequently occur as part of a syndromal hormonal alteration, such as in Addison’s disease, Cushing’s syndrome, hypothyroidism, and hypogonadism. When the primary endocrine disturbance is corrected, affective and cognitive symptoms frequently normalize along with the other signs and symptoms of the syndrome. When depressive symptoms coexist with subclinical alterations in hormonal axes, in general, it is unclear whether the depressive symptoms are caused by the subclinical alterations or occur independently of them. It is also important to recognize that hormonal treatments for major depression can be effective in the absence of any apparent endocrine abnormality, and most of the trials reviewed here have utilized high pharmacological doses (instead of low physiologic replacement doses) in individuals who do not have apparent endocrine deficiencies. Antidepressant mechanisms of hormonal treatments are not solely related to their actions on “classical” endocrine axes. Hormone receptors are distributed throughout the CNS, often within brain circuitry related to emotion and cognition, and the actions of hormones there are likely independent of their traditionally described endocrine roles.

Despite the inconsistency and lack of convincing evidence for some treatments, we identify some actionable clinical conclusions (Table 1), as well as exciting research avenues. Relatively well-established interventions, other than correcting obvious endocrine syndromes, include use of T3 with TCAs for acceleration and augmentation of antidepressants and use of T3 augmentation with SSRIs in treatment-resistant depression; ERT/HRT in perimenopausal or early postmenopausal women who are also experiencing physical complaints related to menopause (e.g., hot flashes, vulvovaginal atrophy); and oral contraceptives as second-line therapy after SSRIs in PMDD. Rapidly developing areas of highly promising research include mifepristone for the treatment of major depression with psychotic features and progesterone-derived neurosteroid modulation to decrease or stabilize allopregnanolone to treat PMDD and to enhance allopregnanolone signaling in postpartum depression, particularly as a rapid-acting option when waiting for an SSRI to take effect. Given the evidence, we believe that several of the strategies discussed here could be useful for patients who have not responded to first-line treatments. However, it is important to underscore that while potentially useful, these medications (with the exception of intravenous brexanolone for postpartum depression) do not have FDA-approved indications for major depression. Over the next several years, the field will have a better sense of whether these exciting preliminary findings can be replicated in larger samples and applied to clinical practice 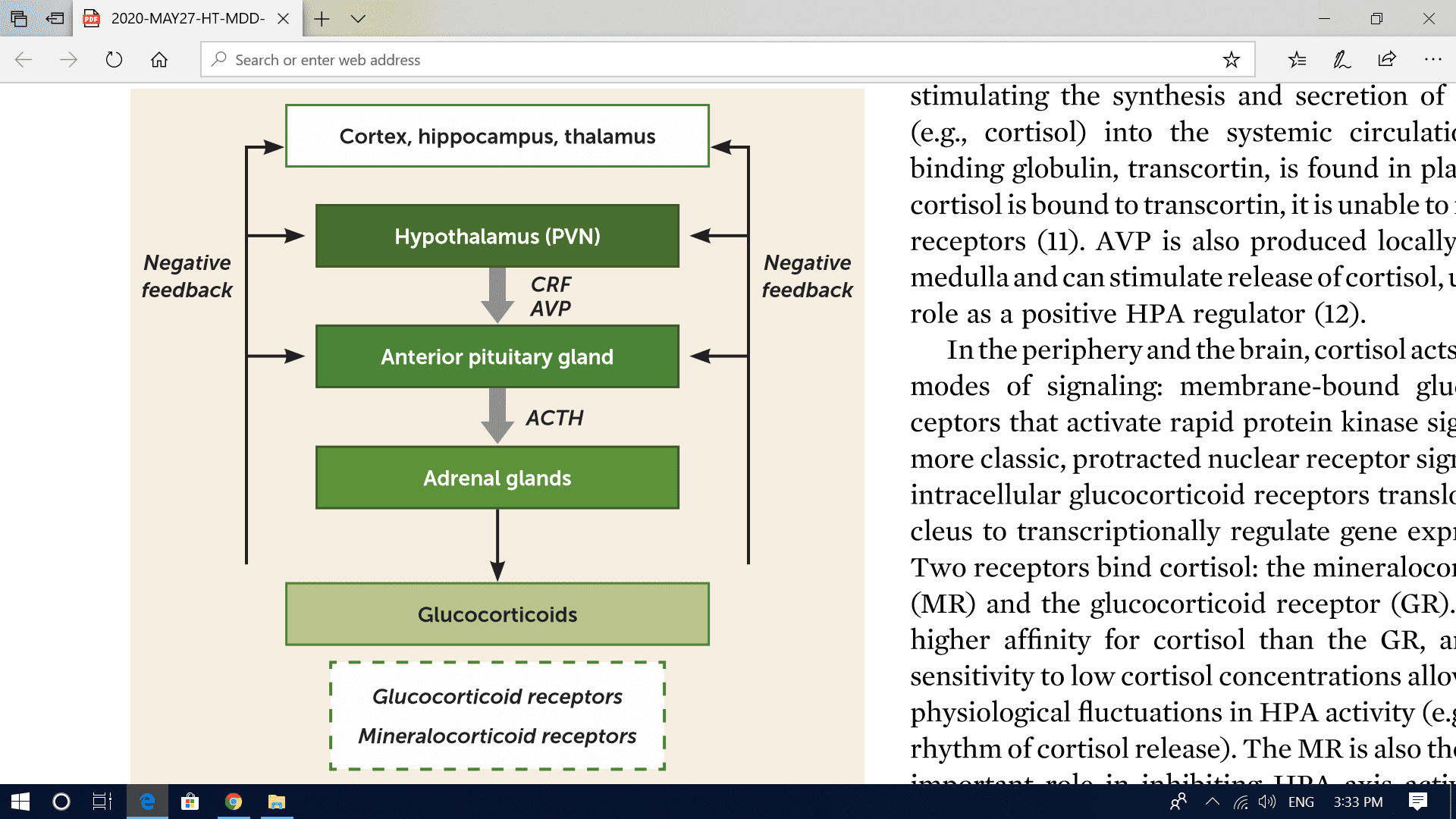 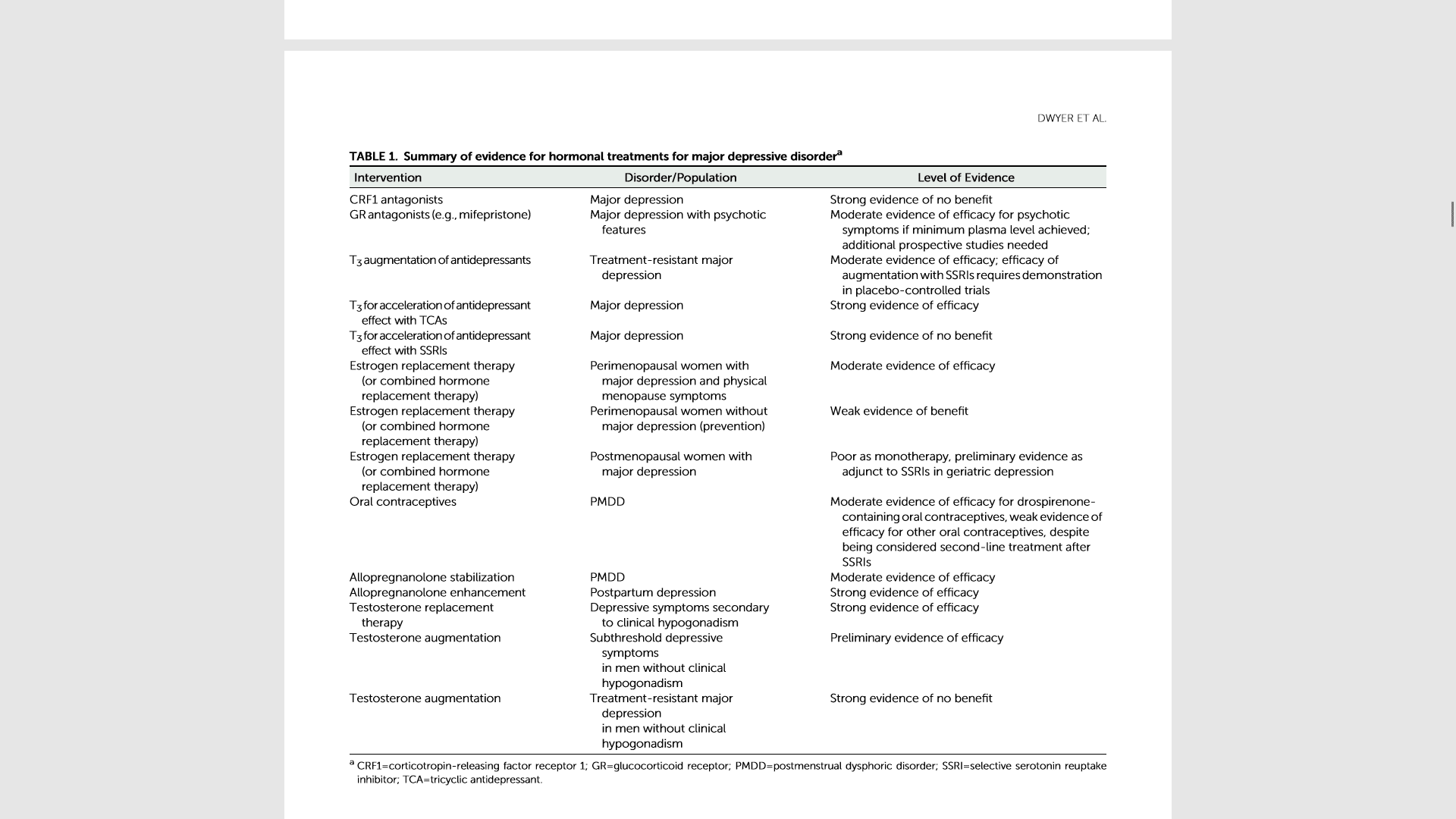 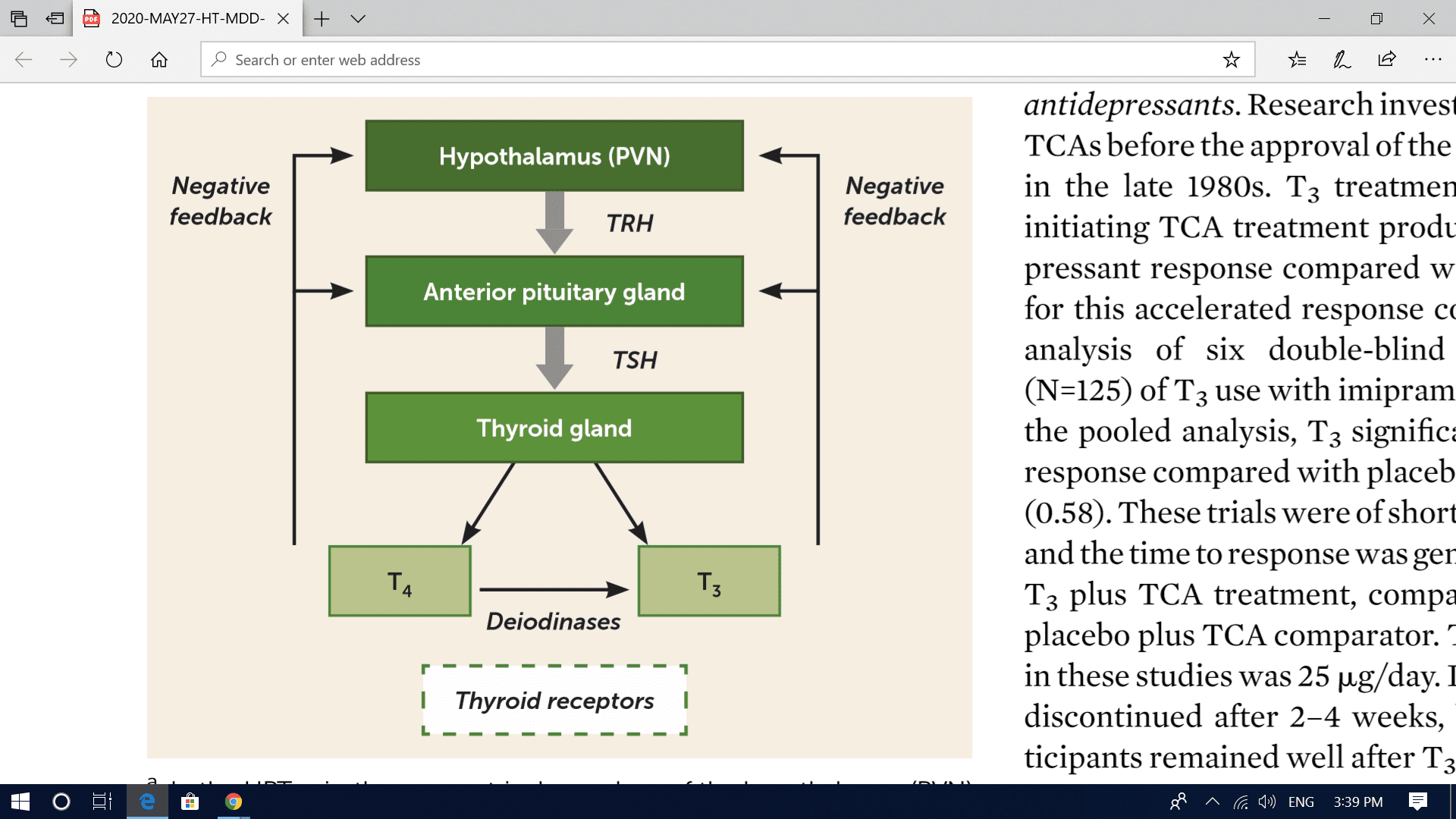 In the HPT axis, the paraventricular nucleus of the hypothalamus (PVN) releases thyroid-releasing hormone (TRH), which stimulates the anterior pituitary to release thyroid-stimulating hormone (TSH) into the peripheral circulation.ThethyroidglandthenreleasesT4 andT3 into the circulation. Circulating T4 can also be converted to T3 via deiodinases. These hormones act on thyroid receptors in target organs and as a means of regulating negative feedback at the level of the hypothalamus and pituitary. 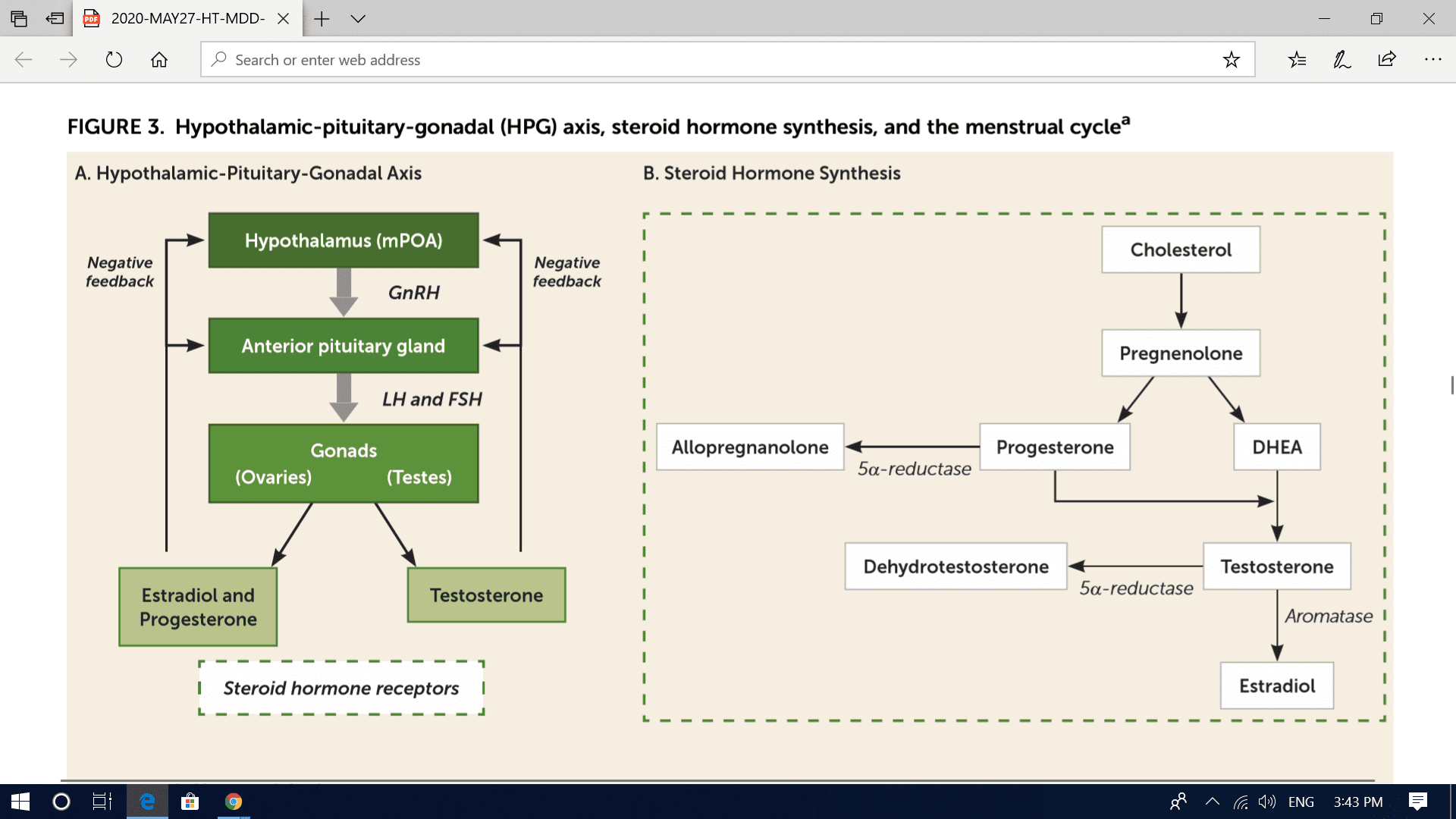 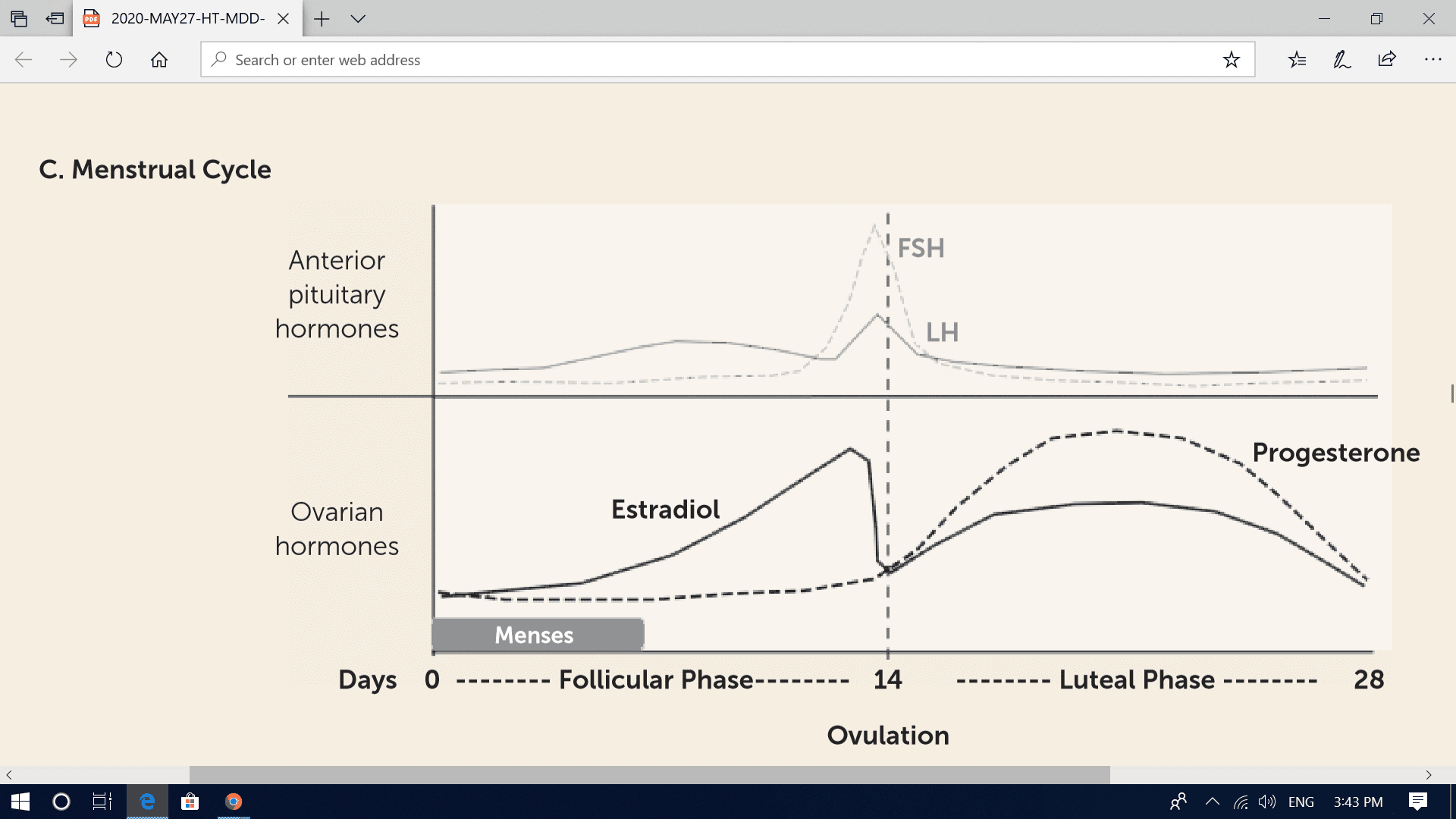 As shown in panel A, in the HPG axis, the medial preoptic area of the hypothalamus (mPOA) releases gonadotropin-releasing hormone (GnRH), which stimulates the anterior pituitary to release luteinizing hormone (LH) and follicle-stimulating hormone (FSH) into the peripheral circulation. These factors stimulate the gonads to produce sex hormones, with the ovaries producing estradiol and progesterone and the testes producing testosterone. Panel B summarizes steroid hormone synthesis: Cholesterol is the precursor molecule to sex hormones, which can undergo a variety of enzymatic transformations. DHEA=dehydroepiandrosterone. As shown in panel C, after the menstrual cycle begins at day 0 with the occurrence of menses, estradiol gradually climbs during the follicular phase (days 0 through 14 of a 28-day cycle). Ovulation is triggered by the spike in anterior pituitary production of luteinizing hormone (LH) and follicle-stimulating hormone (FSH). During the luteal phase (days 14 through 28), progesterone and, to a lesser extent, estradiol rise. The production of both hormones then begins to fall toward the end of the luteal phase, a time of vulnerability for premenstrual dysphoric disorder symptoms. In the absence of pregnancy, falling ovarian hormone levels lead to the shedding of the uterine lining with menses, beginning the cycle again.
Last edited: May 27, 2020
You must log in or register to reply here.
Share:
Facebook Twitter Reddit Pinterest Tumblr WhatsApp Email Link